What view of human nature does Stevenson present in the Novel The Strange Case of Dr. Jekyll and Mr. Hyde?

Human nature can be defined as the fundamental characteristics of a human. Stevenson explains to the reader that good and evil are a part of human nature. He does this by showing the actions of two characters in the novel, Jekyll and Hyde.

Don't use plagiarized sources. Get your custom essay on
“ What view of human nature does Stevenson present in the Novel The Strange Case of Dr. Jekyll and Mr. Hyde? ”
Get custom paper
NEW! smart matching with writer

These two characters are completely contrasting from each other yet they are the same person. Jekyll is described to be generous and respected by the society “every mark of capacity and kindness”. However, Hyde is described as a “juggernaut” which can be implied as something that is unstoppable and crushes everything ruthlessly. Jekyll is also described to be a gentleman who is handsome “a large, well-made, smooth-faced man of fifty”. The gentlemen during the Victorian times were described as clean and healthy.

The word “well-made” suggests that he was brought up well and is educated. During the Victorian times only the wealthy people were able to provide money for their children o go to school. Jekyll deliberately drinks the potion which transforms him knowing what effects it can have on him. He shows that he is pleased with himself “I was the first that ever did so for his pleasure”. The word “pleasure” suggests that he likes transforming into Hyde. Hyde is known to be a cruel man who in appearance in deformed and horrendous “hardly human”.

This suggests that Hyde is an animal or a beast. Hyde is also described as “hellish to see” which portrays to the reader that he is extremely frightening. It can also mean that Hyde resembles the devil. Hyde’s actions and behaviour shows that he is inhumane “he was trampling his victim underfoot, and hailing down a storm of blows” Stevenson’s use powerful words emphasise Hyde’s violent actions.

The word “trampling” contributes to the suggestion of Hyde being some sort of animal. It also tells the reader that Hyde has no remorse in killing someone Stevenson also presents his views of human nature through the themes of the novel and the atmosphere. Throughout the novel there is a mysterious atmosphere which allows Jekyll, in the disguise of Hyde, to lurk around Soho. Hyde’s fiendish deeds are hidden by London’s foggy nights “dark like the back-end of evening”. The dark nights kept Hyde from getting caught. The actions of Jekyll and Hyde portray to the reader that good and evil is a part of human nature.

During the Victorian times, reputation was an important part of human nature. If a gentleman was exposed of doing something bad then his reputation will be ruined. Utterson and Enfield are two characters that find reputation an important factor of life. Utterson is a lawyer who would be considered as an upper class citizen during the Victorian days. A lawyer has a good understanding of what is moral and immoral; however Utterson decides to take the immoral path in this novel.

Enfield is a “man about town” and is someone who likes to go out and enjoy themselves. He is also an upper class citizen. Utterson and Enfield do immoral things to keep Jekyll’s reputation intact “never to refer to this again”. There is another occasion when Utterson takes the immoral choice simply because it may ruin Jekyll’s reputation. When Carew is murdered Utterson identifies the murder weapon and knows that it belongs to Jekyll “he recognised it for the one that he had himself presented many years before to Henry Jekyll”. Utterson’s and Enfield’s actions show that reputation is a huge deal to them. Their behaviour reflects that reputation is a part of human nature.

The themes of the novel portray Stevenson’s views of human nature. The main themes are: secrecy, dual nature of man and hypocrisy. Stevenson tends to withhold a lot of information such as the description of Hyde to create suspense and tension. The structure of the novel creates a sense of secrecy for the reason that the readers are told the truth about Jekyll and Hyde at the end of the novel. Nevertheless, there are hints within the novel to direct the reader onto unravelling the secrets. When a character is describing Hyde all they seem to say is that he is deformed “must be deformed somewhere”. This tells the reader that the characters are terrified of Hyde.

The description of Hyde’s door creates a mysterious and evil atmosphere “a certain sinister block of building. Stevenson portrays the door to be isolated and neglected “marks of prolonged and sordid negligence”. The word “sordid” suggests that the door is disgusting and filthy. The description of Hyde’s door gives the reader an understanding of the characteristics of Hyde. Hyde’s door is the opposite of Jekyll’s house which is described as beautiful “The hall…was brightly lighted up”. With these themes Stevenson tries to convey that secrecy, dual nature of man and hypocrisy are a part oh human nature.

The basic human emotions that drive people are love and hate, and within these two, come other emotions like sympathy, forgiveness and revenge. Minor characters like the police show self interest “and the next moment his eyes lighted up with professional ambition”. From this Stevenson portrays that after hearing from Utterson about the bodies lying is Sir Danvers Carew, the police officer took it for an opportunity to fulfil his ambition and gain some fame. Sir Danvers Carew was a very important person and was well known, thus the police officer thought that finding the murderer will possibly get him up higher in his career.

The character Hyde’s servant also shows emotions. She shows ‘odious joy’, the word ‘odious’ means deserving hatred. Stevenson chooses to use the word ‘odious’ along with the word ‘joy’ which have complete different meanings creating an oxymoron. The servant’s actions and response to Mr. Utterson saying ‘this is Inspector Newcomon, of Scotland Yard’ was surprising to here because she seemed excited that Hyde is in trouble “he is in trouble! What has he done?’ She was quite shocked which Stevenson clearly points out using the exclamation marks. She is also curious which is shown by the “?”. The view of human nature Stevenson presents on this character is that she acts amazed and astonished as well as odious joy.

In the novel, Stevenson’s view of human nature is showing common emotions in characters and showing how people are in reality. Stevenson creates an atmosphere where it is showing daily human actions and emotions. Jekyll and Hyde are used to represent inner conflict. Stevenson portrays a lot of hate, love and desire throughout the novel, but the message he gives out to the reader is that one needs to be in control of their darker side of human nature, and stop the seed of evil that grows within them.

What view of human nature does Stevenson present in the Novel The Strange Case of Dr. Jekyll and Mr. Hyde?. (2017, Nov 05). Retrieved from https://studymoose.com/what-view-of-human-nature-does-stevenson-present-in-the-novel-the-strange-case-of-dr-jekyll-and-mr-hyde-3-essay 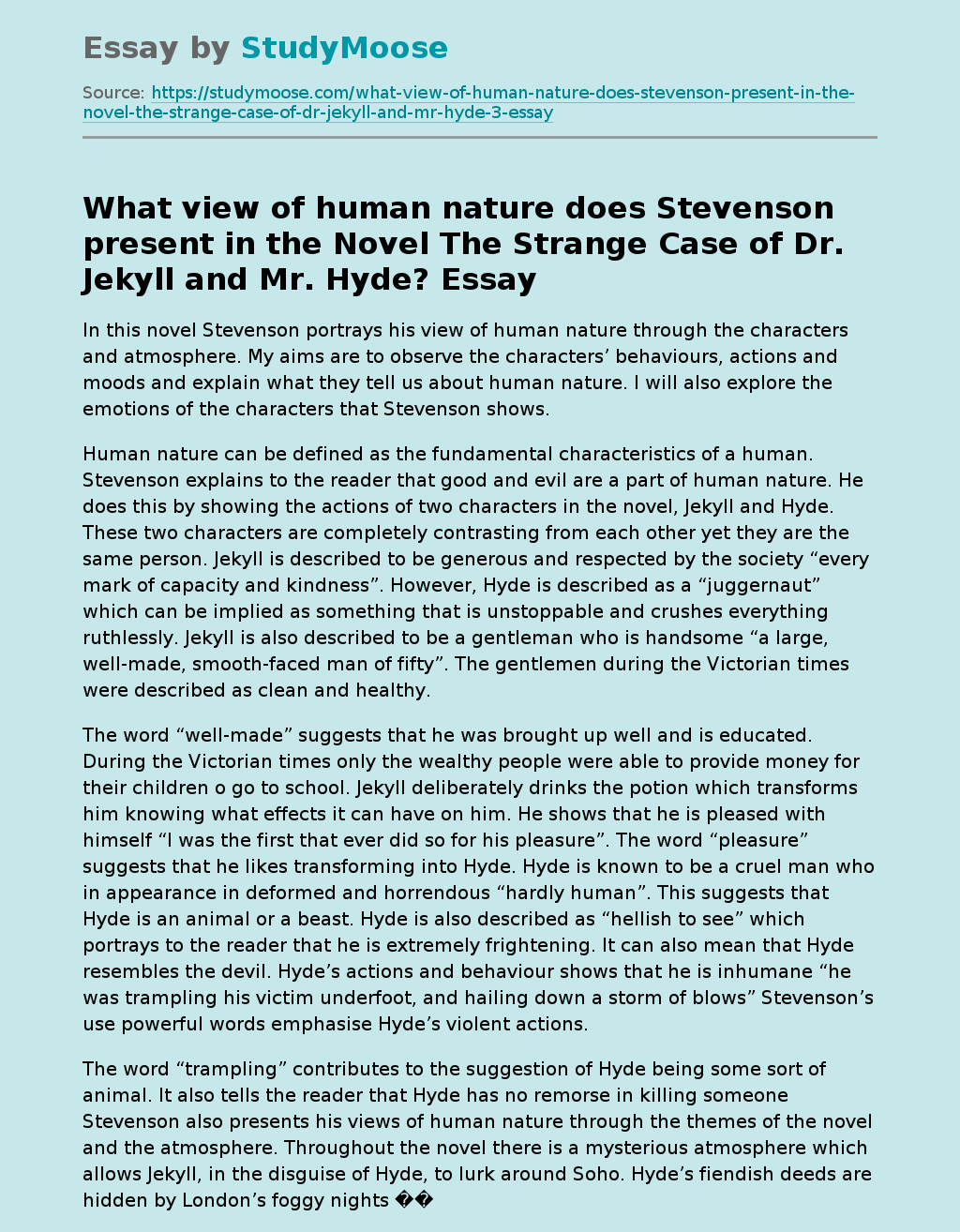