In Dr. Jekyll and Mr. Hyde Robert Louis Stevenson uses three main characters to represent Freud’s theory of the Superego, Ego and the Id to warn readers of the dangers of not playing by society’s rules. Freud’s theory talks about the three parts of personality: id, ego and superego. Dr. Jekyll, Mr. Hyde and Mr. Utterson are the three main characters and they represent the three parts of personality. The superego is the policeman of the personality. In the story, Mr.

Turn in your highest-quality paper
Get a qualified writer to help you with
“ Dr. Jekyll and Mr. Hyde: Id, Ego and Superego ”
Get high-quality paper
NEW! AI matching with writers

Utterson is a great lawyer and he is finding the secret between Dr. Jekyll and Mr. Hyde. Stevenson uses Mr. Utterson as the superego to shows the moral values and human conscience in society and also to contrast the good and evil sides of a person. In the beginning Mr. Enfield tells the story of Mr. Hyde runs over the girl, Mr. Utterson is obsessed like a detective with finding the truth. When Mr. Utterson and his guest are looking at the two papers that have Dr.

Jekyll and Mr. Hyde’s handwriting on them, they find the handwritings are identical. He says “Henry Jekyll forge for a murderer!” (39) Mr. Utterson says Dr. Jekyll is making fake evidence for the murderer, which is Mr. Hyde.

At the end of the novel, Mr. Utterson finds the secret, which is really surprising. Stevenson uses Mr. Utterson to shows the superego against the Ego and Id. Stevenson uses Mr. Hyde as the Id. He is the pure evil side of Dr. Jekyll, Stevenson describes him as looking like an animal. In Freud’s theory, the Id is like a spoiled child, selfish, without control. “Hyde broke out of all bounds and clubbed him to the earth… with ape-like fury.” (28) That’s what the maid sees when she is standing near the window. Mr. Hyde murders this high status governor Carew just because he thinks he is annoying. The Id is selfish, and like a child it doesn’t care about anybody else.

Carew is just asking for directions, but Mr. Hyde beats him to death. Stevenson describes him like an ape. Mr. Enfield also says he looks like a “Juggernaut” when he runs over the girl in the beginning of the novel. Animals don’t have consciences; they don’t know what’s right or wrong. They only care about themseleves. Dr. Jekyll, the main character in the novel, is also Mr. Hyde. Stevenson uses Dr. Jekyll as the ego to show how people must tolerate and postpone their pleasure. When Dr. Jekyll first transforms into Mr. Hyde, he sees himself in the mirror: “I looked upon that ugly idol in the glass, I was conscious of no repugnance, rather of a leap of welcome.” (80) Because Dr. Jekyll can’t stand being a serious gentleman all the time, he chooses to become Mr. Hyde at first. But then he doesn’t want to be Mr. Hyde anymore, because Mr. Hyde is a murderer, and that’s not what he wants.

He still wants to be the good side of him. Before “Mr. Hyde” commits suicide, Poole already finds that there is something weird about his master, and he asks Mr. Utterson to come. Just before they are going to break into the cabinet, Mr. Utterson hears someone say, ”Utterson, for God’s sake, have mercy.” That’s Mr. Hyde’s voice, and also Dr. Jekyll’s last words. Even though it’s Mr. Hyde’s body, Dr. Jekyll is trying to ask Utterson to forgive him. The ego of Dr. Jekyll’s personality is rejecting Mr. Hyde. Poole described “weeping sounds like a woman or a lost soul.” Mr. Hyde would never feel bad for being Mr. Hyde, and he would never commit suicide. However Dr. Jekyll does commit suicide because he knows he can’t change back to the old Henry Jekyll.

Stevenson uses these three main characters and Freud’s theory of personality to shows the duplicity of human nature and how the values of society are opposed to them. Dr. Jekyll and Mr. Hyde are the two sides of human nature. In Freud’s words, they are the ego and id. Mr. Utterson represents the views of society and the superego. Dr. Jekyll nourishes Mr. Hyde by being Mr. Hyde, and as Mr. Hyde grows stronger and stronger. Dr. Jekyll can’t control him any more. As Dr. Jekyll says, “… Exercised and nourished, if this were much prolonged, the balance of my nature might be permanently overthrown…” (85-86) The more a person indulges in the Id; the more the id consumes the person. 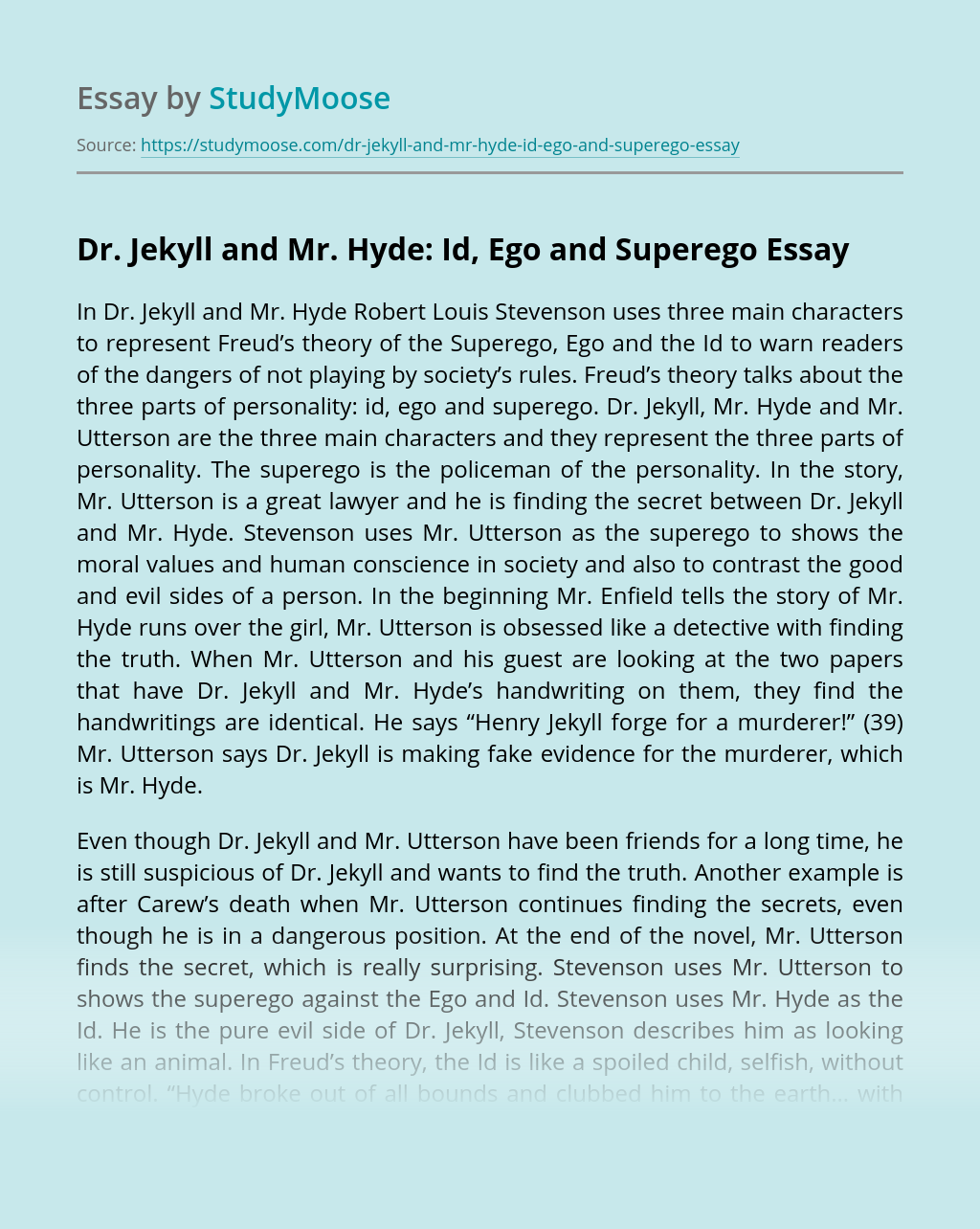 Turn in your highest-quality paper
Get a qualified writer to help you with
“ Dr. Jekyll and Mr. Hyde: Id, Ego and Superego ”
Get high-quality paper
Helping students since 2015
Stay Safe, Stay Original