An analysis of the Detective Genre

The detective genre is a style of writing which follows a strict set of conventions, for example the criminal must be introduced early, not just brought in at the end. Edgar Allen Poe, an American, wrote the first detective story, ‘Murder on the rue Morgue. ‘ All detective stories are based on and influenced by this story. Doyle’s stories follow the conventions of Poe’s ‘Murder on the rue Morgue’ as in most of Doyle’s stories are ‘locked room’ cases and have a gothic and exotic element in them.

Don't use plagiarized sources. Get your custom essay on
“ An analysis of the Detective Genre ”
Get custom paper
NEW! smart matching with writer

In 1929 a writer called Monsignor Roland Knox set out ten conventions which he suggested that any writer of detective fiction should follow, these conventions seemed to be set on Doyle’s stories. The detective genre is popular due to its mysterious and baffling crimes, gothic settings and supernatural and exotic touches and the fact that the detective restores order by logic. In this essay I will discuss how Sir Arthur Conan Doyle’s short stories follow the detective genre and how he is successful in making them interesting.

‘ These all show Holmes politeness and kindness, this makes his character look caring and reassure the reader and clients.

Holmes character is eccentric as well, this is shown by the quote from The Speckled Band ‘he refused to associate himself with any investigation which did not tend towards the unusual and fantastic. ‘ This makes the short stories interesting as they contain a gothic, exotic and supernatural atmosphere. Holmes is a master of disguise and this is shown in The Man With The Twisted Lip ‘ It took all my self control to prevent me from breaking out into a cry of astonishment… His form had filled out, his wrinkles were gone, the dull eyes had regained their fire…

Holmes is able to camouflage himself

None other than Sherlock Holmes. ‘ This quote tells us that even Holmes friend Watson could not recognise him. This means Holmes is able to camouflage himself to get clues for cases with out recognition and interference. Holmes’s appearance does not follow the Victorian values. In stories written during the Victorian times every evil person tended to look evil. However Holmes description in A Study in Scarlet is; ‘ his eyes were sharp and piercing… his thin hawk like nose gave his whole expression an air of alertness and decision. ‘

This description makes Holmes sound a little bit evil, which might be the reason he can ‘see deeply into the manifold wickedness of a human heart’. This demonstrates that Holmes has a good understanding of the human mind. Holmes is really observant this is displayed in The Speckled Band, ‘No, but I observe the second half of a return ticket in the palm of your hand… before you reached the station. ‘ This reassures the client as it shows her that she has come to the right person to solve the case. Holmes also takes his time to examine the evidence.

This is shown in The Speckled Band Holmes drew one of the chairs into the corner and sat silent, while his eyes travelled round and round up and down, taking in every detail of the apartment. ‘ Also in The Devils Foot, ‘The lamp, which was an ordinary standard, he examined with minute care’. These quotes show that Holmes examined things for minute clues, which is one of the reasons that he succeeds in solving mysteries that the police can not. Holmes is widely known for solving mysteries and crimes that baffle the police. ‘ I am sure, Mr Holmes that we are very much indebted to you for having cleared the matter up.’

This quote from The Man With The Twisted Lip shows us that the police admire Holmes skills and that he solves a lot of crimes and mysteries that they can not. Holmes is dedicated to his job you can see this in the quote from The Devils Foot, ‘In an instant he was tense and alert, his eyes shining, his face set, his limbs quivering with eager activity. ‘ This shows us that Holmes becomes alive and intrigued by these unusual cases. Holmes never sleeps on the case either, this is displayed in The Man With The Twisted Lip,’ So he sat as I dropped off to sleep, and so he sat when a sudden ejaculation caused me to wake up, and I found the summer sun shining into the apartment. ‘ This also shows us his dedication to solve the mysteries.

Another example of his dedication is ‘ so absorbed was he in his thoughts I remember, that he stumbled over the watering-pot, upset its contents and deluged both our feet and the garden path. ‘ This demonstrates that Holmes is continuously thinking about his cases and going over the clues he has and forming a theory that works. This exhibits middle class value of hard work.

Holmes represents justice, order over chaos which are Victorian values. He has an immense understanding of the world and people and this is shown in the quote taken from The Man With The Twisted Lip ‘I have seen too much not to know that the impression of a women may be more valuable than the conclusion of an analytical reasoner. ‘ This shows that Holmes can comprehend the minds and ways of the world. This is also displayed in The Speckled Band as he tells Watson ‘Subtle enough and horrible enough. When a doctor goes wrong he is the first of the criminals’.

An analysis of the Detective Genre. (2020, Jun 02). Retrieved from https://studymoose.com/analysis-detective-genre-5949-new-essay 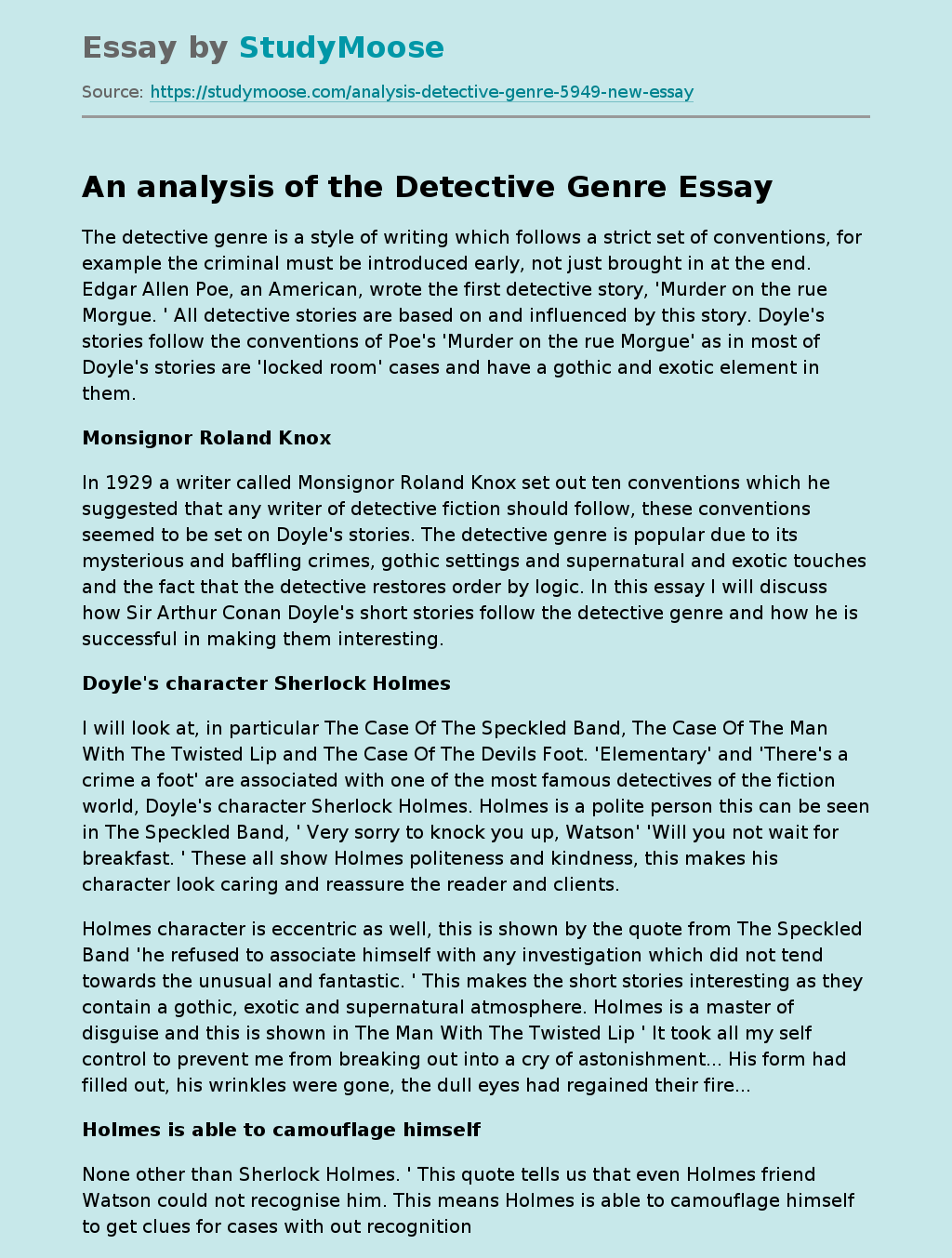