The lightning lit the sky a bright purple and white colour, it seemed as though the sky was on huge faulty light waiting for someone to fix it. Matthew Davies had just left the police force after helping to solve a murder case, it had taken six months to solve and it turned out to be his own wife. Almost immediately after he filed for a divorce, that’s when he moved from Portsmouth to London. He didn’t just leave because of this though it was mainly because he was arrogant and didn’t like the way things were being run and thought he could do better himself.

Don't use plagiarized sources. Get your custom essay on
“ Summary of Detective Short Story The Landlady ”
Get custom paper
NEW! smart matching with writer

His office didn’t look like much at the moment, just boxes everywhere. All he had was his old black, leather chair -that was falling apart- and his marked, mahogany desk. The room was reasonably large with a green, aged carpet that looked like it had been walked on quite a bit.

There were also shelves but they were falling off the wall, not much use to him.

Earlier in the week the estate agent had showed him the office. When he looked up at the tower of offices he realised his office was south facing. The estate agent had said that it was in an ideal position and the sun will flood through the windows in the afternoon, Matt had replied ‘I wasn’t actually thinking about sunbathing in here,’ He didn’t talk to him in the same joyful, annoying tone after that comment.

Matthew was stood at the window watching the rain fall to the ground and people running for the bus on the once busy street as he thought about how he could advertise, would people think it was a joke? Did people think there were really occupations such as Private Eyes? Would anyone actually consider asking him to look for a missing person or anything like?

The office and the other problems that may have crossed his mind once or twice were now of no concern to him right now as he had had a phone call from Mrs. Weaver about her son, Billy Weaver. Apparently ten years ago he was reported missing in Bath, while he had gone to work there. She then proceeded to read out the first and last letter he had sent to his mother:

She had also told him that the police had tried to track him down but they’re still looking -apparently-. She was still desperate to find him though even if he is dead, he could hear it in her squeaky voice. Stood at the platform in King’s Cross Station drenched, at 10.30pm was where he started his hopefully interesting journey to Swindon. The two patches of yellow in the distance finally formed into an old, lifeless train.

He couldn’t get off the noisy, battered train fast enough, he now had a headache after all the screeching caused by the friction on the wet tracks. He then stepped onto a more modern quieter train for the final part of the journey to Bath. The young woman’s voice over the tannoy echoed through the whole of the train. “Next stop, Bath” It wasn’t loud but it woke him with a start, he jumped up with his, briefcase and suitcase eager to get off and find somewhere to stay.

The steel on the bottom of his shoes made a clicking sound on the cold, hard concrete. The station had a distinctive smell and pigeons were flying around in the hollow roof some were perched on the cream, iron pillars. A porter -in a red suit with gold thread around the cuffs and the bottom the trousers, coat and the neck. The circular hat was also red with gold circling around the top, to match the rest of the uniform- approached him with a brass trolley attempted to take his cases from him to put on the trolley but his arm fell through the night air as Matthew pulled his cases away before the porter could reach them.

“Do you know of any respectable place I can stay for a few days?” he asked sternly.

“Yes, err… a five minute walk down the road on your left,” he answered quietly. Have you heard of Billy Weaver?”

“Aye, a young man in his early twenties I would’ve guessed. I gave him the exact same directions to the same place as I just gave you,” His face had brightened up quite a bit while telling this small story then suddenly he frowned. “About a week later his picture was on the news and underneath it read: MISSING! They never did find him though. Never will I suppose,” he smiled with a wicked gleam in his eye. “Ahem… sorry I have to go, my shift has finished now!”

“I could talk to you all night but I want to go just as much as you do!” he replied with a false smile. The giant clock in the station had just struck midnight. Standing outside the pub directed to -after not a five but thirty minute walk- there was an old sign that read ‘NO VACANCIES TRY THE BELL AND DRAGON UP THE ROAD’ He rubbed his tired eyes “I wonder how far this place is ‘up the road’?” he thought to himself angrily.

As he strolled up the badly lit, cobbled street he thought about how the porter had poured out his thoughts to him without realising. His face had disturbed him quite a bit. An old house had caught his attention and had ‘B&B’ written in the window underneath it read, ‘ï¿½10 per night’ this reminded him of the letter Mrs. Weaver had read out to him from Billy. ‘This must have been where he stayed,’ he thought to himself -again-.

He knocked on the door straight away without any hesitation. Within three minutes an old, plump woman with bright red lipstick and nails to match! She reminded him of a drag queen and not a good one at that! Her unusually deep voice disturbed his thoughts “Come in!”

He stepped in reluctantly but he would have stayed anywhere right now.

“Let me take your coat,” she had changed the tone of her voice and it now screeched like a rat in his ear. There were no coats on the antique coat stand “Are you on business?” she asked politely.

“You could say that, I’m looking for Billy Weaver. I was told that he stayed in a Bed and Breakfast somewhere in the area but it was some time ago,”

She looked confused for a minute “Oh yes! I remember now, a young man. He looked very similar to you come to think of it,”

He followed her into the dimly lit room to the right of the hall way. There was a small dog curled up in front of the fire. He slowly bent down to stroke the dog. It was rigid.

“Isn’t he lovely!? I stuffed him myself. I couldn’t stand to be without my pets!”

Matt was now stood up straight as rigid as the dog.

“I’ve got a few upstairs, I’ll have to show you them after you’ve had some tea and cake!” nearly throwing the plate at his face.

“No thanks, I’ve just eaten,” he replied swallowing hard, trying to keep composed.

“Won’t you sign my guestbook!?” shoving a tatty, green book in his face as well. There was only three names in the book:

Christopher Mullholland, Gregory W. Temple and Billy Weaver (His name stood out the most!)

“Do you know were Billy Weaver went after he left here?”

“No, he left his money on the side and disappeared, I never even saw him leave,” she sounded like she was going to cry but he felt no sympathy for her. “To me it feels like he never left, I can still feel his presence just like all of my guests!” she carried on glaring right into his eyes.

“I’ll have to go and unpack my things! I’ll see you in the morning,” he was glad to escape from her company.

“Goodnight dear,” he heard her call to him from the bottom of the stairs in an overly friendly voice.

Lying on his bed he thought about the events of the day. The lady that owned this house -that needed re-decorating- reminded him of the porter in a strange way. When Matthew woke it was eight in the morning he got dressed in his black, stale suit and shoes that he had worn yesterday. He then walked out towards the bathroom.

He -thought that he- heard a man cursing something “Is everything alright in there?” he called through the door. Who ever it was in there coughed and then answered in a more feminine voice “Yes, everything’s fine, I’ll be out in a minute!”

He went to look at the other bedrooms and saw three models, they looked very lifelike. He then looked at the clothing and one of the jackets was an i.d it just happened to be Billy Weavers. He was stunned these are what she was referring to as he “pets” Was she planning on doing this to him? He thought bewilderedly. Luckily the Landlady was still in the bathroom so he decided to go downstairs, have some breakfast and the phone the police to arrest the strange thing that occupied the dated house. As he opened the cupboard in the kitchen a small, clear box came into his view straight away, it had blue pellets. It was labelled: POISON. He slammed the door and made his way towards the phone. He dialled 999 and asked for the police, he told the woman on the phone about who he was and what had happened.

The police arrived within minutes of his call, they discussed the case and how he thought the Landlady was the porter that directs you down this way and lies about the walk down which gives him time to get ready for your arrival. He also dresses up as a woman, maybe to seem friendlier. He thinks that the Landlady puts the poison in the cupboard in the tea and waits for you to die from the effects and proceeds to stuff you and adds you to his collection of “pets” Just then he heard a familiar voice “What are you doing here officer!?”

“I’ve come to arrest you under suspicion of murdering: Billy Weaver, Christopher Mulholland and Gregory W. Temple,” he replied calmly.

After questioning and a search of the house, they found the porter’s uniform. The “Landlady” admitted to killing all three men and then stuffing them. Matthew Davies thought he was going to have quite a successful career as he sat now on the train back to London. 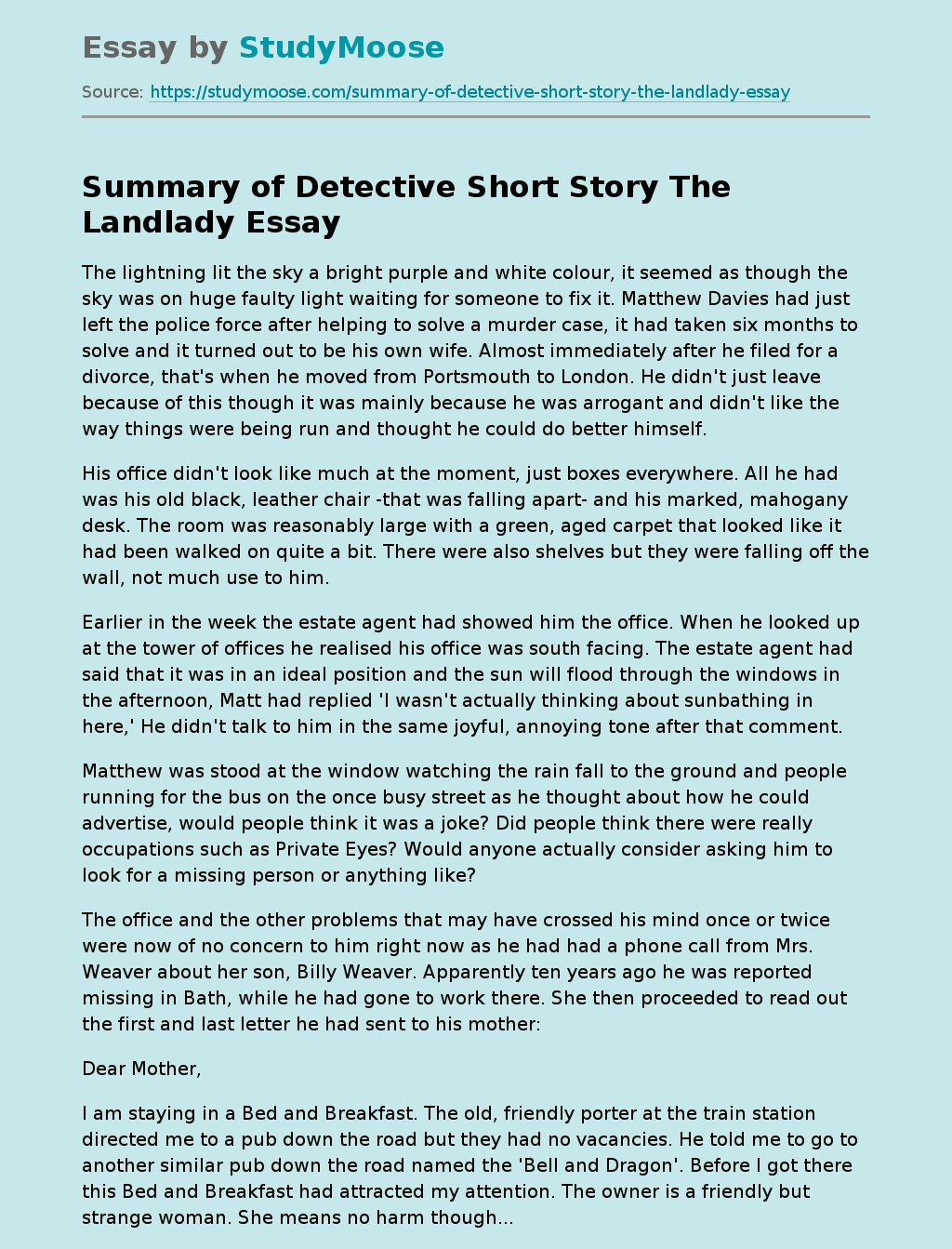