Short story summary of "The A&P" by John Updike

In the short story, ” The A&P,” by John Updike, the author seeks to make his point using an unlikely setting and scenario. Using a supermarket as a metaphor for a society, Updike illustrates how breaking the norms of society evokes fear and brings about intolerance in people. When a society is accustomed to only one way of doing things it will not be accept anything different. Members of a society fear change, and only behavior that deviates from the status quo.

Don't use plagiarized sources. Get your custom essay on
“ Short story summary of “The A&P” by John Updike ”
Get custom paper
NEW! smart matching with writer

They resist allowing new things into their society because of this fear.

Sammy, the main character, has a very simple but mundane life. He doesn’t appear to have many prospects of improving his life; he has no hopes and dreams for the future. Sammy is an employee of the local A&P, which we come to realize, is a society within itself. Throughout the short story the store is represented to reflect a homogenous society where routine was commonplace.

For example, it never fails that one lady comes in to buy groceries and ask questions about everything Sammy rings up. He knows that she will harass him about all the prices and watch over him like a hawk to make sure he is doing everything right. He even describes how the people who come in to the store do the exact same thing every time. Nothing ever seems to change from the norm.

One day, as Sammy was ringing a customer up at the cash register, he looked up and saw three girls walk in the store.

E went into great detail describing the girls. They were wearing clothes that nobody in the society would wear in the A&P. The main girl, who he nicknamed Queenie, had on a bikini top and walked in with her head held high. The other two girls just followed behind her as they walked down the aisle. Sammy was intrigued by the way they were so different but yet confident within themselves. He went into great detail about how they looked and the impression he got from seeing them. He knew they were not the normal types of customers who came into the supermarket.

HE was amazed that when they walked down the aisle everyone was so caught up in their routine that they were oblivious to the girls. Sammy knew that if the manager saw the girls he would be threatened by their lack of regard for the rules, and asks them to leave. This is the main fear in the narrative story. The fear to be different from everybody else and to do what a person feels is right without caring what other people think about it.

As the girls approached Sammy to pay for their food, the manager saw them and quickly came over. Just as Sammy and predicted, the manager told the girls that they were not allowed to wear those clothes in the store. The girls did not understand why they couldn’t just stop in and get one thing they were sent by their parents to get. Queenie argued with the manager because she didn’t think that she had caused a problem. But Sammy knew that the reason was because she was violating one of the society’s norms. She was being rejected just because she dressed different from the rest of the people in the A&P society. Finally the fear Sammy had kept in about being different was let go so he could go out into the world and have different experiences. He stood up for what he believed in.

Sammy described everything in the narrative in great detail in order for the reader to be able to understand the metaphor. At first Sammy understands and accepts the society, in fact he is a part of it as the cashier. But when he realizes how unfair and rigid society is, he rebels by quitting.

Short story summary of "The A&P" by John Updike. (2016, Jul 06). Retrieved from https://studymoose.com/short-story-summary-of-the-ap-by-john-updike-essay 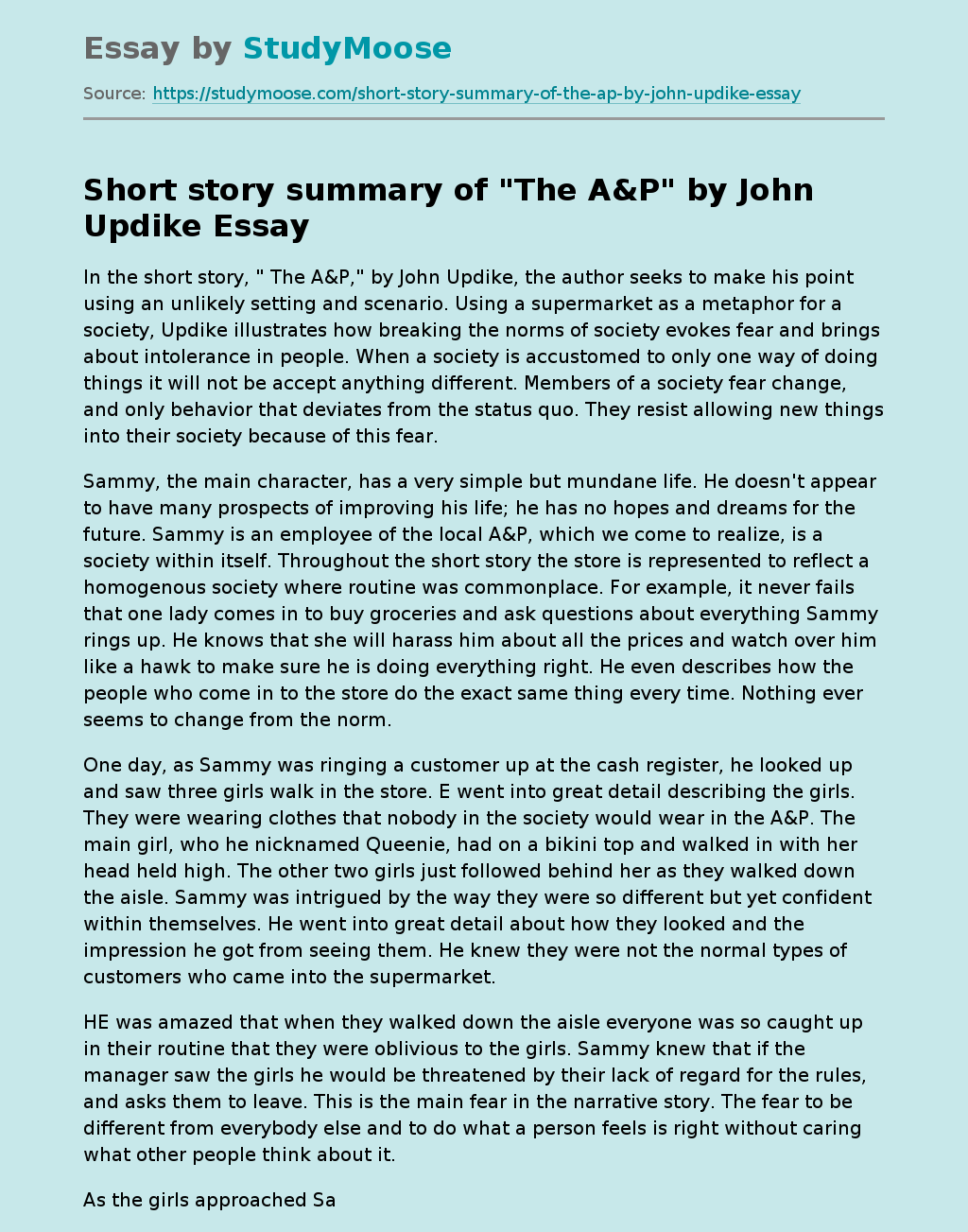