“A & P” author John Updike did a wonderful job portraying the point of view in this short story. Webster’s dictionary defines point of view as a position from which something is considered or evaluated. In this short story, first person point of view is used by the narrator. A nineteen year old boy who works at a grocery story called A & P is the protagonist. At such a young age, Sammy has a teenage, wondering mind which he uses to get himself into more trouble than he can handle.

Don't use plagiarized sources. Get your custom essay on
“ The point-of-view of John Updike’s “A & P” ”
Get custom paper
NEW! smart matching with writer

The story is written in first person point of view because of Sammy’s non-appropriate descriptions, his overreactions as the story concludes, and the large array of Sammy’s foolish colloquial language.

The manager of the store is good friends with Sammy’s parents, and they are the ones who got him the job. First person point of view shows the reader how Sammy overreacts as the story is foretold.

The boy has to have patience being a cashier and must learn to cope with his frustration. At the beginning of the story you can tell that Sammy is not a very responsible cashier as he gets caught off guard when he sees a few girls entering the store. Because of this distraction, the customer who is at the counter starts throwing a fit simply because he rang up the same object twice. Immediately the reader catches a glimpse of the inner personality of Sammy.

He picked out everything wrong with this witch in order to block his anger.

After this encounter, we all know that Sammy is a little critical in the way he views people. Sammy watches the girls as they stroll around the store in awe of their imperfections. His hypocritical notion of these non-perfect girls is contradictory to himself because he himself is not close to perfect. Sammy comes from a blue-collar family with nothing to show for more than a small house and a small name.

As Sammy portrays himself by using the first person narrative, the audience comes to see him as a boy so involved in outer beauty he sees nothing else. The boy watches the girls move along the store and one by one he gives them sexist names according to their imperfections. He assigned the name chunky to the one that was overweight as if he had known her his whole life. The leader of the pack, Queenie, seemed to be the one who made all the first moves. His opinion of these girls was at first glance, and by nature he thought he was better than they were. Sammy’s colleague, Stokesie, was a twenty-two year old married man working to put a roof over his family and food on the table. The regular customers where given the name house slaves and started lining up in Stokesie’s line because of his more responsible appearance.

Sammy tends to make a point for himself as he decides to be a hero as the story concludes. First person point of view Queenie struts her way to the register only to be followed at separate intervals by her lovely beach bums. At the same time, Lengel, the manager, makes his way to Sammy’s slot and observes the slightly dressed females. Of course, he stands by the store policy and tries to refuses service to the girls due to the lack of clothing. Sammy and Stokesie watch and enjoy the spectacle unfold before their very eyes. Sammy comes to a time where he must make a decision. He could be a hero and stand up for the girls and possibly lose his job or play it off nonchalantly. As many men would, when women are involved, the decision making process is altered. Wanting to impress the girls and to show his heroic gesture, Sammy blurts out, “I quit!” Before anyone hears him, the girls are gone and Lengel is confused. Sammy tosses his working apparel and walks out the door.

Sammy’s lust for the girls led him to act as a hero for their sake. Updike chose this type of point of view to allow the reader to learn more about Sammy. If Updike had chosen a different point of view he would not have been able to convey the same information. Sammy’s concern for the girls at the beginning of the story is limited, whereas at the conclusion he becomes attached and reacts in a way unseen for the situation. First person point of view creates vivid imagery used to describe the girls as a juvenile thought they were; not what everybody else thought. As Sammy shows his critical thoughts, the ironic ending shows that looks can be deceiving. 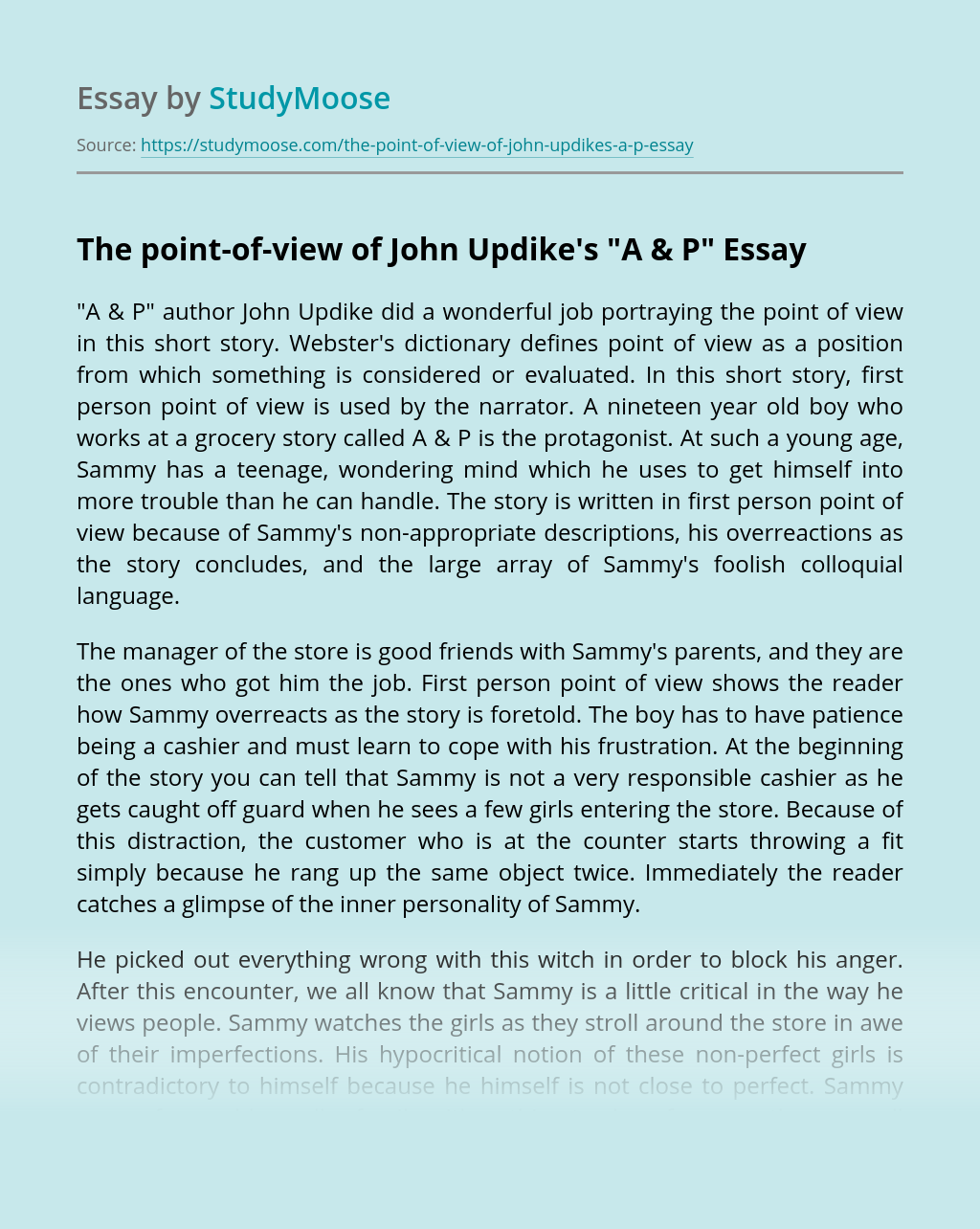