John Updike’s short story, A&P, is recounted from the point of view of its nineteen year old narrator, Sammy. Sammy’s character is particularly significant in the story. While the work has received several different interpretations, the focus of the story is clearly the lesson that the narrator learns in the course of events. The use of narration and description are especially revealing for Sammy’s personality. The story is told in the Present Tense and the style is appropriate for oral rather than written presentation.

The descriptions, which focus on the appearance and gestures of the three girls in bathing suits who walk into the supermarket, are also significant as they monitor Sammy’s reactions. Thus, through the raw style used for narration and description, the story reveals Sammy’s subjective perception of the events, his youthful, romantic infatuation with the three girls and his desperate, chivalric but useless act. Sammy, who works on the cash register of a supermarket, is dazed by the appearance of three young girls, dressed in bathing suits.

This is immediately apparent in the opening line of the story: “In walks these three girls in nothing but bathing suits” (Updike 187). The beginning of narration already reveals the impact that the image of the three girls has on the young boy. Significantly, Updike preserves the ungrammaticalities that Sammy makes in his speech. This technique has the effect of characterizing the narrator as a young, unsophisticated, middle-class boy. The whole of the story is dedicated to Sammy’s careful, detailed observation and description of the three girls and to his own, chivalric act, which concludes the story.

The description of the three girls is in itself revealing for Sammy’s character. The focus is on the narrator’s eye, as he follows the girls from his place at the register, as they appear and disappear behind the aisles of the supermarket. He is both surprised and delighted at their appearance and their beauty. His eye is first caught by the chubby girl, wearing a green two-piece bathing suit and then by the brunette girl. Ultimately however, his focus remains with the third girl, that he calls Queenie.

As the name he gives her shows, she is his favorite of the three and, in his view, the most beautiful one. Thus, the description is made exclusively from the narrator’s subjective point of view and registers faithfully his own reactions and impressions. What is significant moreover is the way in which Sammy perceives the girls on the whole. If the other characters in the story are either judgmental of the girls’ impropriety or else sexually attracted to them, Sammy is fascinated with the girls.

According to his idealized perception, they are mythological or exotic creatures that belong to another world. He is so struck by their nude appearance and their natural beauty that he feels they are unlike everything else he has seen before. The setting of the story is particularly important in this respect. As Sammy himself emphasizes, the supermarket affords only dull views, unremarkable or ugly people. In Sammy’s view, there is a striking contrast between these unwonted customers wearing only bathing suits and the regular clients of the supermarket.

Thus, when the girls approach with their single purchase, they hesitate between Sammy and one of his colleagues on another register. Sammy’s description of the old couple that goes up to Stokesie is very significant: “…Stokesie with his usual luck draws an old party in baggy gray pants who stumbles up with four giant cans of pineapple juice (what do these bums do with all that pineapple juice’ I’ve often asked myself)…” (Updike 193). The couple is dressed in “baggy, gray pants”, contrasting deeply with the girls’ colorful bathing suits and their young bodies.

Also, Sammy is puzzled by the old couple’s purchases and obviously perceives them as ridiculous. On the other hand, he is not struck by the girls’ attire in an unpleasant way. When he notices one of his coworkers looking at the three girls in an improper way, Sammy feels that this is unjust and he even feels sorry for them: “All that was left for us to see was old McMahon patting his mouth and looking after them sizing up their joints. Poor kids, I began to feel sorry for them, they couldn’t help it” (Updike 195).

There are other examples in the description that emphasize Sammy’s own perception of the girls. For instance, he is absolutely struck by the way in which Queenie wears her suit, with the straps down: “She had on a kind of dirty-pink – – beige maybe, I don’t know — bathing suit with a little nubble all over it and, what got me, the straps were down” (Updike 188). The fact that the girl wears the straps of her bathing suit down is delightful for Sammy.

Moreover, the fact that he is sometimes clumsy in his description, not knowing, for example, what the exact color of Queenie’s suit is, also speaks of Sammy’s character as a young boy who is not extremely pertinent in fashion matters. Also, when the manager reprimands Queenie and her companions, Sammy sees the pickled herring jar reflected in the blue eyes of the girl. Again, the way in which Sammy observes and describes the situation shows him to be a romantic character, who regards the girls as representatives of an exotic, mythological world.

Furthermore, Sammy’s romanticism is obvious in the way in which he contrasts the girls with the other shoppers. For him, the others are blind to the beauty of the three siren girls: “You could see them, when Queenie’s white shoulders dawned on them, kind of jerk, or hop, or hiccup, but their eyes snapped back to their own baskets and on they pushed. I bet you could set off dynamite in an A & P and the people would by and large keep reaching and checking oatmeal off their lists…” (Updike 192). The others do not perceive the girls as Sammy does and are not struck by their aesthetic quality.

Queenie’s white shoulders, bare and indicative of purity, are the symbol of the natural, uncensored by social rules world of the beach, whereas the consumers are symbols of the automatic drives of production and consumption of the capitalist society. Sammy sees the other shoppers for what they are – not individuals, but the components of a system, a mere herd, their personalities limited to the very automatic gestures and directions imposed by the shopping list. In his descriptions, Sammy sets the girls well apart from the ordinary, mechanical and artificial world of the supermarket.

As critics have emphasized, the story’s symbolism clearly points to Sammy as a romantic hero who becomes lured by the beauty of the sirens: “Updike pokes gentle fun at Sammy because he succumbs to the girls who are cast in the roles of the legendary Sirens–the mythological temptresses who lured unwary males to their destruction” (Blodgett 103). Sammy portrays the girls as being in sharp contrast with the common world, which is represented by the materialist preoccupations in the supermarket.

As he stands dazed by the appearance of the girls, he significantly makes a mistake on the register, ringing the same box of crackers twice. The mistake further emphasizes Sammy’s abstraction into the fairytale, mythological world the three girls belong to. His final gesture of quitting his job in order to defend the girls is also significant: he refuses any connection to the pragmatic, insensitive world of the supermarket, which remains careless in front of the girls’ beauty.

Their exoticism is further underlined by the fact that the city is far from the ocean that the girls’ image represents so well: “It’s not as if we’re on the Cape; we’re north of Boston and there’s people in this town haven’t seen the ocean for twenty years” (Updike 189). For Sammy, the girls are sirens who conquer him with their beauty and who also prove to have a fatal influence over his destiny in the end. Thus, Sammy’s narrative and descriptive style points to his personality and his views on the events he participates in.

He embodies the young, inexperienced youth who becomes infatuated with a beautiful, exotic girl. As Wells points out, Sammy is not aware of his sexual attraction to the girls and idealizes it, transforming it into a gesture of honor and chivalry: “A&P is told after the fact by a young man now much the wiser, presumably, for his frustrating infatuation with a beautiful but inaccessible girl whose allure excites him into confusing his sexual impulses for those of honor and chivalry” (Wells 129). In the end however, Sammy learns a hard lesson.

His romantic view, resembling that of Don Quixote, makes him quit his job and adopt the role of the unacknowledged hero: “The girls, and who’d blame them, are in a hurry to get out, so I say ‘I quit’ to Lengel quick enough for them to hear, hoping they’ll stop and watch me, their unsuspected hero”(Updike 194). However, like Don Quixote, Sammy obviously mistakes the girls’ potential for sexual appeal for something more. Instead of the glory he expects as a hero, he is left with the uncertainty of a future without a job.

The girls, like fairies, vanish into thin air and the supermarket world remains as grey as before, with its usual inhabitants: “I look around for my girls, but they’re gone, of course. There wasn’t anybody but some young married screaming with her children about some candy they didn’t get by the door of a powder-blue Falcon station wagon” (Updike 196). Sammy is therefore the embodiment of an idealist, inexperienced young man, who seems to believe that the three girls belong to another world. Through the use of narrative and description, Updike renders a vivid portrait of the narrator of A&P.

Thus, the narrator speaks in his own language, using his own particular style. Moreover, his observation and description of the three girls and of the events is very significant, as it reveals him to be an idealist young man, with unreasonable expectations of what the surrounding reality should look like. 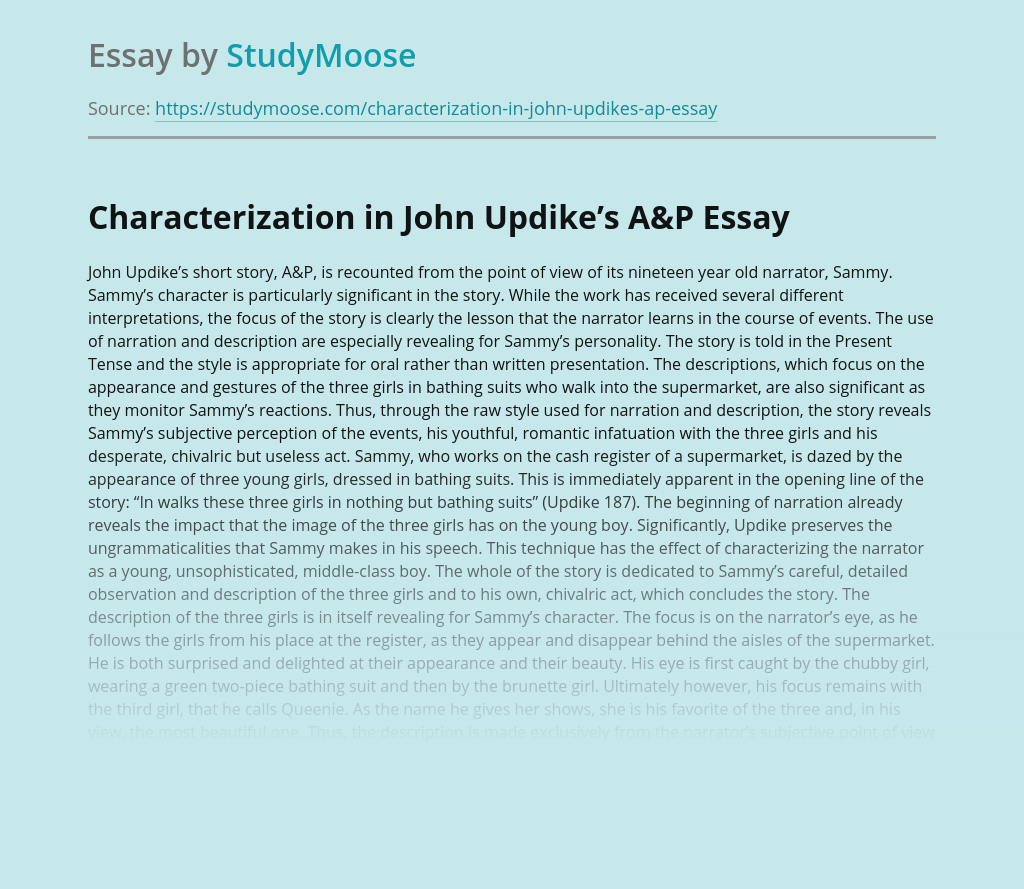