The External/Internal Conflicts in A&P

After reading John Updike’s short story “A&P”, it is clear that conflict is present from beginning to end. The general conflict carried throughout the story is centered on conformity. A few examples of conflict presented in this story include Sammy versus his opposition of the store’s structure and community’s mindset, Lengel verses the girls and Sammy versus himself. As the story opens, we are introduced to an opinionated, observant, sarcastic and hormone-driven 19-year old boy who works as a cashier in a grocery store of a small town.

As he describes the store and his surroundings, the reader begins to sense Sammy’s discontentment with his mundane life when he shares his thoughts and perceptions. For example, he refers to customers as “sheep” and “house slaves”. The external conflict between Sammy and his small town’s views develops as he watches the girls maneuver their way around the store. These girls were a breath of fresh air.

They were new, different and seemed to stir up some outrage and criticism.

For instance, Updike writes, “A few house-slaves in pin curlers even looked around after pushing their carts past to make sure what they had seen was correct” (119). He even began to feel sorry for the girls as he saw “old McMahon patting his mouth and looking after them sizing up their joints” (Updike 120). This demonstrates how Sammy began to realize how closed-minded and ordinary the town he lived in was. Another external conflict arises when Lengel, the store manager and Sunday school teacher confronts the girls about the store’s policy.

In particular, Updike states, “‘we want you decently dressed when you come in here’ ” (121). Sammy resented the fact that Lengel and all the “sheep” judged the girls simply by their clothing or lack thereof. His act of quitting was to show them that they all overreacted to the situation with the girls. While the external conflicts were playing out in the story, Sammy was going through an internal metamorphosis. His internal conflict burst out when he said “I quit” (Updike 121).

Although Sammy’s decision to quit was initially an act of rebellion to be a “hero” and rescue the girls in order to impress them, he quickly learned that he had also made a powerful statement toward the conformists of his small town as well as to himself. Sammy also discovered a new-found confidence to stand up to and act on what he disliked versus mere complaints in his cowardly sarcastic thoughts. For example, Updike writes “But it seems to me that once you begin a gesture it’s fatal not to go through with it’ (122).

This shows that Sammy must now go through with what he had just told Lengel. It forced him to swiftly develop the poise he never had before even though it was unforeseen. He came to the conclusion that, like the girls, he wouldn’t be accepted by his community for wanting more, for wanting to be different, and certainly not for quitting his job. Updike made it clear that Sammy was expected to keep his job and perhaps make a career out of it by someday becoming manager like Stokesie hoped to.

To illustrate, the author writes, “Sammy, you don’t want to do this to your Mom and Dad (Updike 121). This shows that Sammy’s parents wouldn’t approve of his decision. Sammy knew that there was more for him to discover; however, he wasn’t naive to the fact that it would not be easy. Updike makes this clear as he writes, “my stomach kind of fell as I felt how hard the world was going to be to me hereafter” (122). This describes Sammy’s understanding that he would no longer be able to rely on his parents to get him through his life anymore.

He had officially entered adult-hood. This is an incredibly powerful story because every time you read it, you take away something new that you hadn’t previously realized. Sammy’s act of “bravery” definitely left a lasting impact on everyone involved and everyone who reads it too. One can use their own experiences to discover themselves and how they react to social expectations and living in a conformist society. It was never really about the girls, rather seeing their reaction to the norms which triggered his reaction to the same norms. 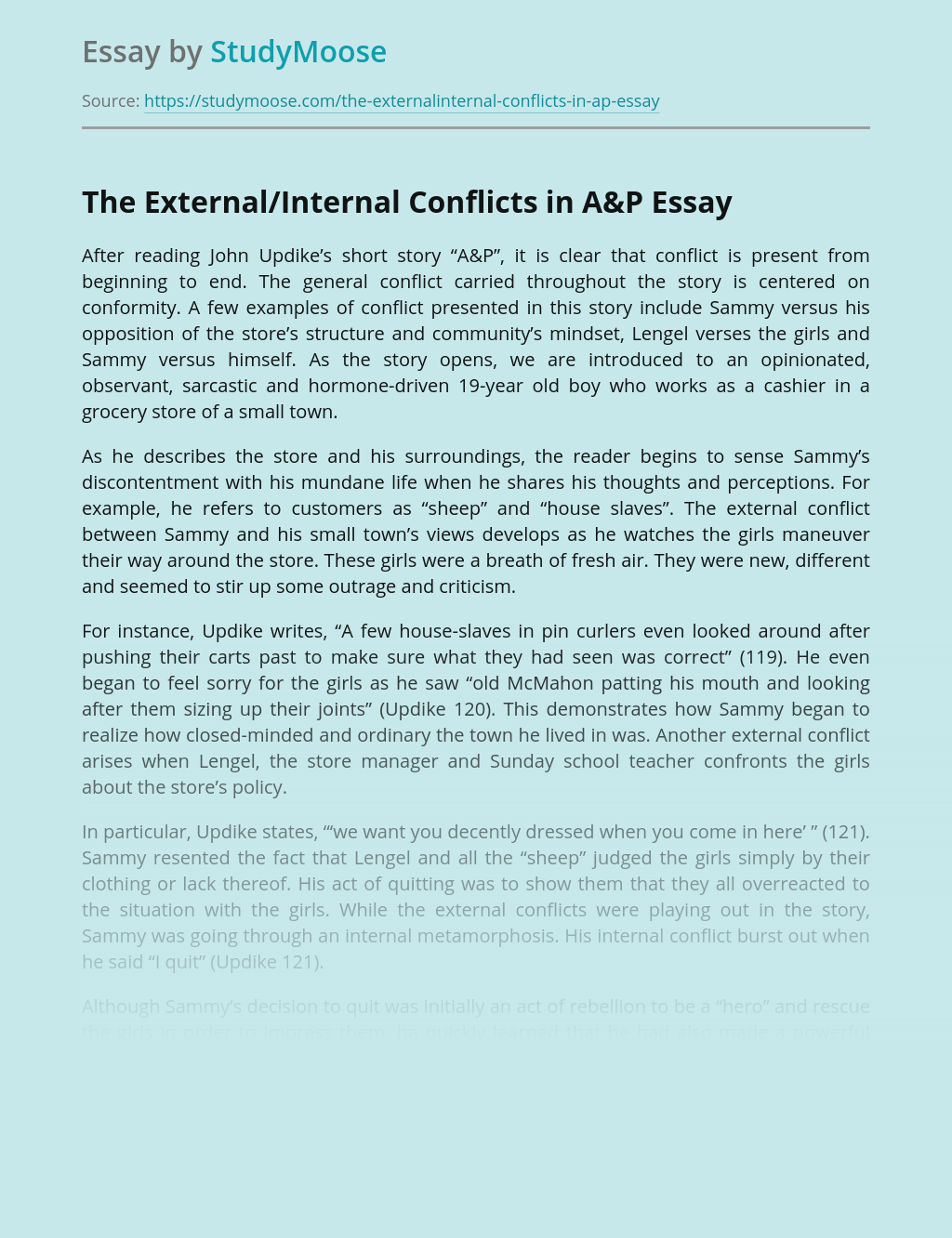 Don’t waste time
Get a verified writer to help you with The External/Internal Conflicts in A&P
Hire verified writer
$35.80 for a 2-page paper
Stay Safe, Stay Original