Symbols in "A Sense of Shelter"

In A Sense of Shelter by John Updike, various symbols are used to emphasize the overall theme of comfort and express the gradually depressing mood. The author uses bad weather, a familiar desk, and a familiar school as symbolic objects within the story to display these ideas. Updike strategically places these symbols throughout the story, emphasizing the importance of these elements.

Weather is one of the accounts used to set the mood of the story. A Sense of Shelter opens up with a detailed account of the weather.

Turn in your highest-quality paper
Get a qualified writer to help you with
“ Symbols in “A Sense of Shelter” ”
Get high-quality paper
NEW! AI matching with writer

The narrator sets the scene with bad weather. Opening with detailed descriptions of snow, thirty-two degrees temperatures, and a winter setting, readers can predict that this bad weather symbolizes something depressing and that the story will not be too uplifting. The bad weather, in this case, stands for the sullen tone that the author tries to convey. The snow in this story also can represent a clean slate or a fresh beginning, which, unlike what was stated above, is not necessarily bad.

Just as the snow provides a blank canvas, the main character is getting an opportunity to have a new start by broadening his horizons outside of his familiar comfort zone through the confession of a long-lasting love and by eventually removing himself from the high school environment he had grown so accustomed to. This symbolic beginning to the story foreshadows that the tone of the story will be gradually depressing.

School, also introduced in the storys beginning, conveys a feeling of comfort.

This school refers to the sense of shelter in which the main character, William, feels obviously comfortable. Loss of comfort, the theme of this short story, is truly demonstrated through this symbol. William is a senior who has been attending his high school for the past for years and feels very comfortable there. However, William also knows that this is his last year as a high school student and therefore must soon leave his school, his sense of shelter. To him, school is a comfort-zone.

This is because he has attended it for many years and therefore knows his way around, he knows the people there, particularly his classmates, and, being a senior, he thinks of himself as one of the schools impervious upper-classmen; someone who cannot be affected by the lesser or younger students. He demonstrates this feeling of superiority by referring to himself as a king [who] seemed to move to his seat between the bowed heads of subjects (55). To William, school is a place abundant in solace, and one where he thrives. To imagine leaving his sense of shelter was nearly unbearable for him, due to his extreme comfort in being surrounded by all this familiarity.

One of the familiar objects that drew William to his sense of shelter was his symbolic desk. Due to his last name, Young, William was always seated in the back of the room with all the other students that had last names in the back of the alphabet. His seat was sanctioned for tradition (55) and he remained sitting in the same desk for twelve years. This seat, too, provided a certain comfort level. He was always able to know which of his peers he would be near, such as Martha Wyckoff or the Zimmermans, and could recognize anything in his seating area, even something as small as a blue ink stain. The desk in this story clearly shows how Williams comfort level was based on familiarity and a lack of change.

This symbol not only represents the shortage of change in Williams seating arrangement, but his lifes overall lack of change, as well. Just as Williams desk always appeared to be in the same location and within the proximity of the same students, this idea of sameness carried over into his actual life. William always sat with the same, younger students at lunch, he always sat alone on the bus, he followed his regular schedule and knew what to expect on a day to day basis. The desk here is truly significant because it represents the lack of change in Williams existence.

What all these symbols do is reiterate to us the apparent theme, loss of comfort, and how it allows William to feel a certain amount of contentment. When this comfort-level is challenged, the audience can notice how the tone gets more depressing. Whether it is through schools sense of shelter, a desk, or snowy, frigid days, these symbols all play an important role in supporting the theme and tone of the story. It is for these reasons that these symbols are so vital in conveying the over-all story, Sense of Shelter.

Symbols in "A Sense of Shelter". (2016, Jul 06). Retrieved from https://studymoose.com/symbols-in-a-sense-of-shelter-essay 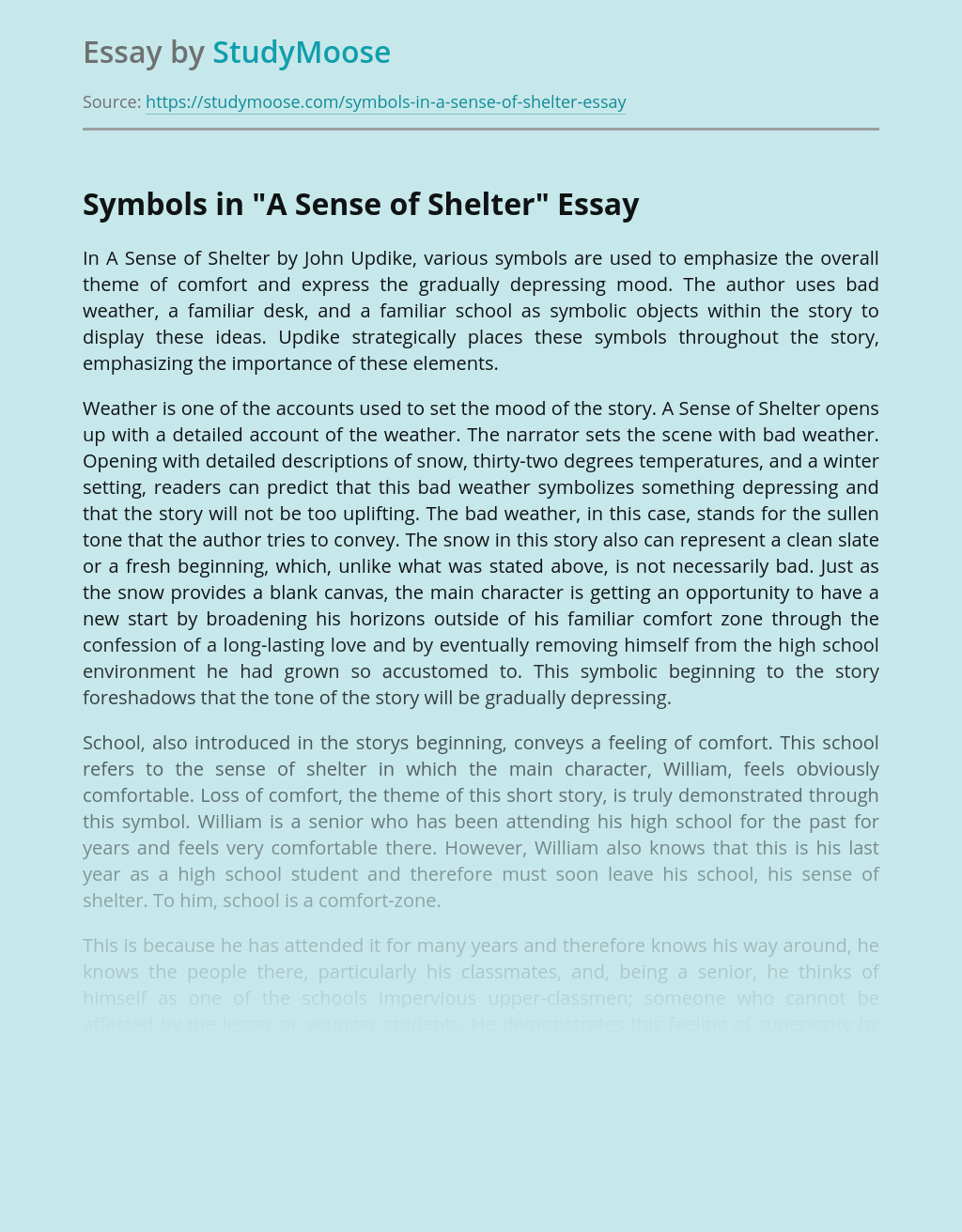 Turn in your highest-quality paper
Get a qualified writer to help you with
“ Symbols in “A Sense of Shelter” ”
Get high-quality paper
Helping students since 2015
Stay Safe, Stay Original