John Updikes a & P Is a Coming of Age Story

John Updikes short story, A & P is about a 19-year-old boy, Sammy, and his short but decisive transformation from a carefree teenager to a grown man with the consequences of his actions weighing heavy on him in the end. On an otherwise ordinary day, the course of Sammys life is changed by an out of the ordinary experience which challenges him and compels him to make a rash decision that is based on what he knows in his heart is right for him.

Turn in your highest-quality paper
Get a qualified writer to help you with
“ John Updikes a & P Is a Coming of Age Story ”
Get high-quality paper
NEW! AI matching with writer

Sammy tells the story as if it is just another day while the life-changing event unfolds in a manner of minutes. He gives insight about the town by giving short character descriptions that are revealing, not only of each character, but also of Sammys feelings about the town, the people in it, and his personal perspective on the life that he is living there. Although the character descriptions paint a negative picture, the negativity has more to do with Sammys thought of living in this town with these characters for much more of his young life.

It is clear that Sammy is more than ready to move on, beyond where his life is now. Sammy offers few facts about himself other than that he is 19 and lives with his parents in a small, conservative, New England town. Sammy points out that the town is not far from the location of the Salem witch-hunts and burnings in centuries past. The elusion to Salem leaves an image of a lingering puritanical cloud over the town and its people.

The story takes place in the A & P grocery store in the heart of the downtown area where Sammy works as a checkout clerk. Sammys co-worker, Stokes, is 22 years old and married with two children. Stokes station in life represents a lifestyle that is not out of reach for Sammy, but certainly not the lifestyle that Sammy desires for his life although it is not clear even to Sammy what exactly the lifestyle that he desires is. Sammys boss, Mr. Lengel, who is a conservative and outspoken man, is a Sunday school teacher and the manager of the A & P. Mr. Lengel is the living image of everything that Sammy does not ever want to be.

The customer that Sammy refers to as the cash-register-watchers and a witch (560) is a character that epitomizes Sammys disdain for the attitude of the usual customer that comes through his check out line on a daily basis, as well as the entire citizenry of his small hometown. The life-altering event begins to unfold in the very first line of the story. In walks these three girls in nothing but bathing suites (560). The very first characters who are introduced in the story are everything that is not acceptable in this ultra conservative town, although the three girls bring with them a burst of pure innocent sunshine. Everyone in the store gawks at the three girls as if they have never seen a girl in a bathing suit. The fact is that they probably had never seen a girl in a bathing suit anywhere other than a place to swim which emphasizes that this is an ultra conservative town with puritanical attitudes. Sammy and Stokes are very preoccupied with the sight of the girls and they enjoy every second of it.

Mr. Lengle, who doesnt miss that much (563) is fully aware of the enjoyment that Sammy and Stokes are having. Mr. Lengle insults the girls by telling them that they are not decently dressed. In the girls minds, uncluttered by the collective oppressive attitude that is the norm in the store, they are decent and see nothing wrong with their appearance. At this point, Sammy feels embarrassment for the girls and at the same time realizes that he is part of their embarrassment, because he is a part of the collective puritanical attitude. He also realizes that this is a turning point for him. Sammy has arrived at a cross road in his young life and he realizes that if he is ever going to become what he sees for himself in his future, and if he is ever going to reach what he truly desires in his life, he must make a decision.

He must decide to break free from the collective attitude or remain a part of it. Sammy makes the decision to break free from the puritanical and oppressive attitude of all of the generations before him. Sammy quits his job and he does it while the girls are still in the store hoping that the girls will take notice that he does not have the same attitude and moral judgment of them and that he does not condone it.

He hopes that the girls will see him as their hero. As Sammy takes off his A & P apron and bow tie, he is shedding the old puritanical views and attitudes. As he walks out of the store, he embraces his newfound freedom and coming of age, although he also realizes that his parents will not be pleased. Sammy has known for some time that this is what he would eventually do, and this was the day, because the three girls provided a good reason and the opportunity for Sammy to assert himself, to become his own person with his own perspective, values, morals, beliefs and attitudes.

John Updikes a & P Is a Coming of Age Story. (2016, Nov 29). Retrieved from https://studymoose.com/john-updikes-a-p-is-a-coming-of-age-story-essay 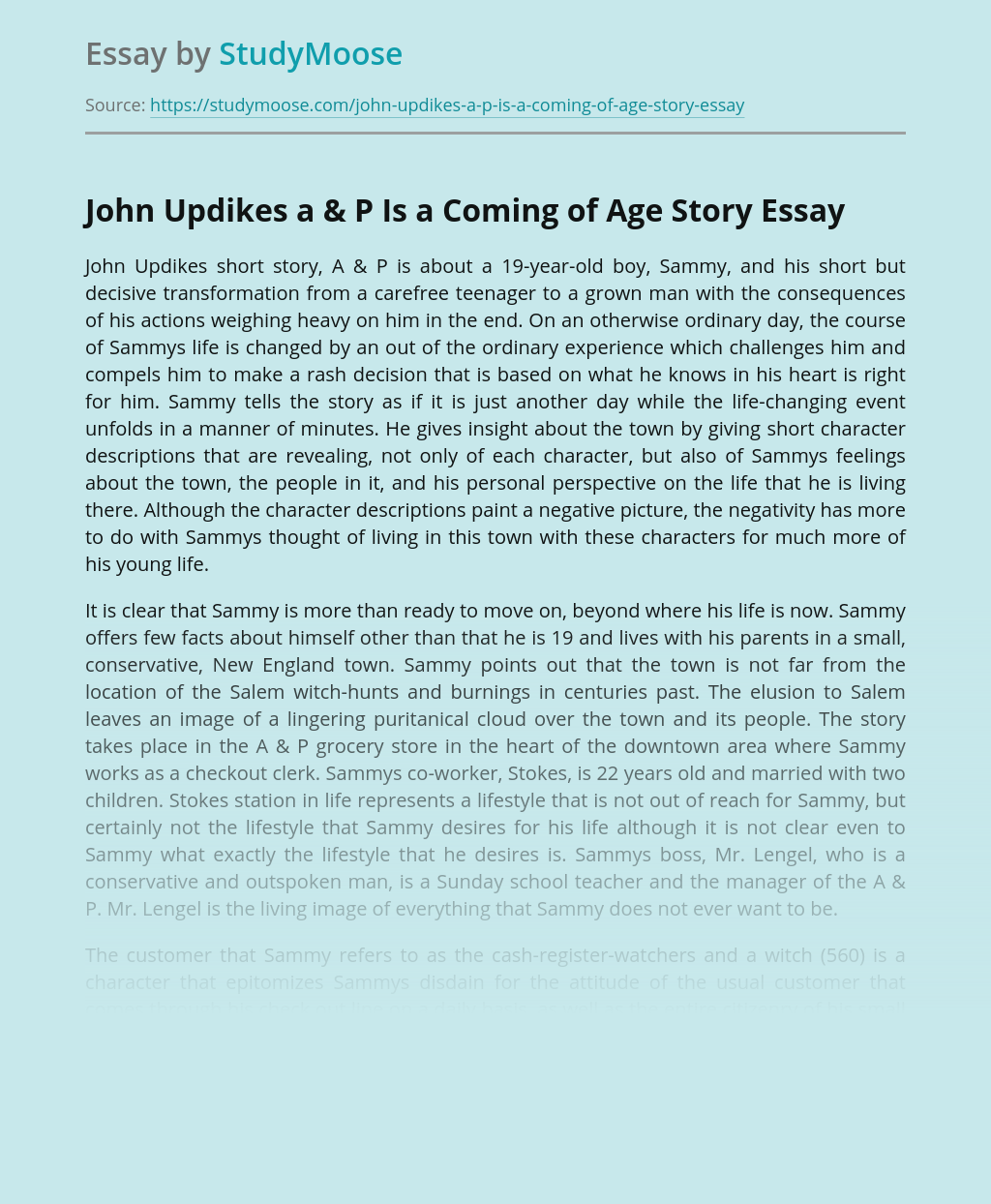 Turn in your highest-quality paper
Get a qualified writer to help you with
“ John Updikes a & P Is a Coming of Age Story ”
Get high-quality paper
Helping students since 2015
Stay Safe, Stay Original