The poem “The Ex-Basketball Player” by John Updike dramatizes the conflict between dreams and reality in the case of Flick Webb. Flick shows such promise in his teenage years, but he ends up in the pathetic reality of helping out at a garage and playing pinball in a luncheonette. The poem begins with the description of “Pearl Avenue” which “bends with the trolley tracks, and stops, cut off / Before it has a chance to go two blocks…” Pearl Avenue presents a ticket name connoting a clean, freshness which describes the state of Flick in high school, his glory days.

Don't use plagiarized sources. Get your custom essay on
“ The Ex Basketball Player by John Updike ”
Get custom paper
NEW! smart matching with writer

The fact that the street stops before it goes two blocks displays the harsh end of Flick’s success.

His prosperity ends with his adolescence; his seemingly assured future becomes a mere wistful memory. At the end of Pearl Avenue sits Berth’s Garage which situates on a corner “facing west”; Flick helps Berth out there on most days. Facing west connotes the setting of the sun and the ending of a day.

It is fitting that Pearl Avenue ends in darkness. Garages have grease and filth in abundance; this contrasts sharply with the shiny, cleanness of a pearl. The poet’s use of diction in the first stanza stresses Flick’s riches to rags journey.

The second stanza contains a comparison of the gas pumps Flick works with at the garage to the players on a basketball team. He “stands tall among the idiot pumps…”; the description of them as “idiot” pumps perhaps illustrates the mediocre intelligence of basketball players, but because Flick “stands tall” among them he is obviously of a higher caliber.

The poet personifies the pumps further as humans with “One’s nostrils are two S’s, and his eyes /An E and O.” using the letters of the brand name as human characteristics. These “team members” remind Flick daily of what he could have been.

The third stanza discusses Flick’s high school greatness and contains the only line where the speaker refers to himself in the first person. Flick played for a high school team called “the Wizards”. Wizard denotes magic and wonder and connotes in this case something too good to be true. The next line says, “He was good; in fact, the best. In ’46…” while the next line does “He bucketed three hundred and ninety points…”. The fact that the poet includes “In ’46” in the first line hints that Flick is the best only at that time. He stresses the fleeting quality of Flick’s greatness. Flick remains “A county record still,” but he fails to become more. The speaker identifies himself as a spectator to Flick’s rise and fall when he says, “I saw him rack up thirty-eight or forty / In one home game.” He also describes Flick’s hands as “wild birds”. They seem untamable, but Flick finds himself caught in a “Webb” from which he cannot escape.

In the fourth stanza the reader learns Flick “never learned a trade, he just sells gas…”. During high school, he focuses so much on high school; certain that will be his profession that he neglects to learn anything else. The speaker describes Flick’s hands as “fine and nervous on the lug wrench” as though he does not know what to do with this foreign tool. His hands feel more comfortable with a basketball which “loved Flick”. The lug wrench is indifferent to Flick though. This displays the wasting of Flick’s talented hands on a tool which does not appreciate them.

The fifth and last stanza illustrates the pathetic quality of Flick’s time away from work. He spends his time as Mae’s Luncheonette where the speaker describes him as “Grease-gray and kind of coiled.” This grayness distinguishes itself from the pearl whiteness of Pearl Avenue and emphasizes how unclean and unfortunate Flick has become since high school. He looks “coiled” and hunched over; he has lost the confidence and lofty height he possesses on the court or around his “team members”. Flick smokes cigars, but he also “nurses lemon phosphates”.

Cigars are for adults, but he also drinks soda-like kiddy drinks like he clings to the past. He finds himself in a sort of limbo, unable to move on without any skills and unwilling to give up his past and his hope for a career in basketball. While in high school, people like the speaker watch Flick play, but now he just boasts the “bright applauding tiers / Of Necco Wafers, Nibs, and Juju Beads.” These snacks are symbols of childhood which Flick continues to look to for fulfillment. Reality comes crashing down on Flick’s dreams, and he will forever remain “The Ex-Basketball Player.” 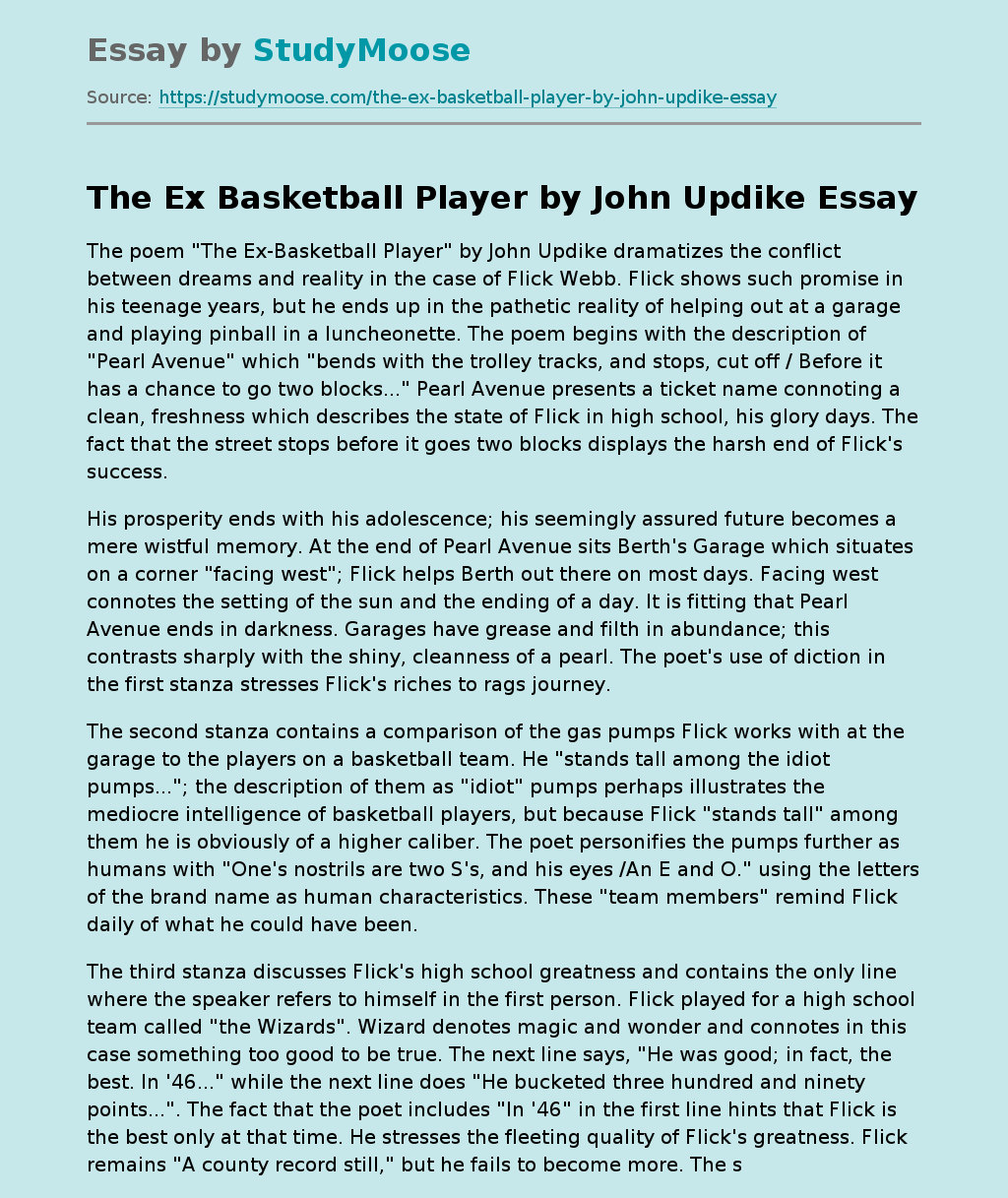