The poem is built around the character of Flick Webb. He is the one referred to as the ex-basketball player. Flick was once a basketball superstar in his county and a record setter. “In ’46, He bucketed three hundred ninety points, A county record still. … I saw him rack up thirty eight or forty” (lines 14,15) . The narrator describes how well Flick played basketball that his record of 390 points for a season has not been surpassed. He was like Kobe Bryant who was averaging 31 points per game and at a time scored 52 against the Houston Rockets.

Don't use plagiarized sources. Get your custom essay on
“ The Character & Flick Webb ”
Get custom paper
NEW! smart matching with writer

(Kobe Bryant Bio 2007) Almost a decade after the glorious high school days, Flick was not able to continue his career as a basketball player. Instead he became a gasman at Berth’s Garage. “He never learned a trade, he just sells gas, Checks oil, and changes flats. ” (lines 19,20) Although Updike did not make any judgment of Flick’s career as a gasman, whether his situation is good or bad, there were suggestions in the last three stanzas that Flick and the people in the community are not happy with what he has become.

“Off work, he hangs around Mae’s Luncheonette. Grease-gray and kind of coiled, he plays pinball, Smokes those thin cigars, nurses lemon phosphates. ” (lines 25-27) These lines suggest that Flick is still a bachelor and nowhere to go but a luncheonette; whiles away the time, not at all socializing. “Flick seldom says a word to Mae, just nods Beyond her face”. (lines 28,29) He must be attracted to Mae who is the owner of the luncheonette but is apprehensive probably because he has nothing to offer the lady.

Ex-Basketball Player is a narrative poem; it tells a story. The narrator is presumed to be the author who could have been a witness to the life of a once popular high school basketball player. The poem is set in free verse so that there is no pattern of measure in the lines and the stanzas. The first stanza has one line, the next has two, followed by five lines for the third and the rest of the stanzas have no pattern. Updike also has a style of leaving the line unfinished and is continued in the next stanza.

Like the line “At Colonel McComsky Plaza. Berth’s Garage” (line 4) is in a separate stanza followed by “Is on the corner facing west, and there” (line 5). Updike’s style seems to pre-empt the idea before it comes in the next stanza allowing smoother flow of ideas. The style is effective because separating the line did not distort the message intended. Imagery “Poetry communicates experience and experience comes to us largely through the senses (seeing, hearing, smelling, feeling, and touching)”. (Reuben, p. 4) These are expressed through imagery.

Updike used a lot of imagery in this poem. Irony was evident in the line, “Flick stands tall against the idiot pumps”. (line 7) Flick standing tall is contrasted to the idiot pumps. It is like saying Flick is proud because he rises above the idiots or he is better off than the other idiots. Updike wants to express how sad it is that the basketball career is over through the description of the location of Berth’s Garage, “Bends with the trolley tracks, and stops, cut off Before it has a chance to go two blocks.

” (lines 2,3) He uses the line “cut off before it has a chance”. (line 2) This means the future of the basketball star was cut off before the man had the chance. Updike even makes a part appear as a puzzle when he described the “nostrils with two S’s and the eyes with an E and O” (lines 10,11) , and he simply means that it is an ESSO gas station. This also reveals the era of the poem because ESSO was most popular in this decade.

“His hands were like wild birds” (line 18), refers to Flick’s quick hands when it comes to handling the basketball, but this is contrasted by the line “His hands are fine and nervous on the lug wrench” (line 23), which this time criticizes his unskilled hands when it comes to changing flat tires. The two contrasting lines talk about the same hands. This shows that Flick was just good at basketball and nothing else. Figurative Language Aside from the symbolisms and imagery, the use of personification is very effective.

Personification is a figure of speech that “gives the attributes of a human being to an animal, on object or a concept”. (Reuben, p. 5) Personification is evident in the description of the gas pumps in Berth’s garage. Updike refers to the pumps as “idiot pumps” (line 7) as if the pumps have brains. It actually means that the pumps have to be guided by the gasman all the time. The pumps also have “their rubber elbows hanging loose and low. One’s nostrils are two S’s, and his eyes An E and O” (lines 10,11). The pumps have rubber elbows and have nostrils and eyes too.

It can mean that the pumps are among Flick’s very few friends left. These are the only ones that can look up on him now that he has become a nobody. On the other hand, another phrase personifies the ball as loving, “the ball loved Flick” (line 16), referring to Flick’s expertise in shooting and dribbling the basketball. At Mae’s luncheonette, Flick looks beyond Mae’s face through the “applauding tiers of Necco Wafers, Nibs and Juju Beads”(lines 29,30) . The line up of wafers, nibs and beads were applauding means that Flick cannot even look directly towards the girl he likes.

He does not have the confidence to talk to a girl; too shy and awkward to even look at her so that his attention drifts to the wafers and nibs at the background. The use of personification has been very effective in portraying Flick’s character as well as in contrasting the happy mood of the past and setting the melancholy mood of the present. Personifying the pumps, the ball, the tiers of wafers, nibs and beads added to the loneliness in Flick’s life, as if there is nobody else to give comfort to him but his pumps, his basketball and the wafers at the background of the luncheonette. 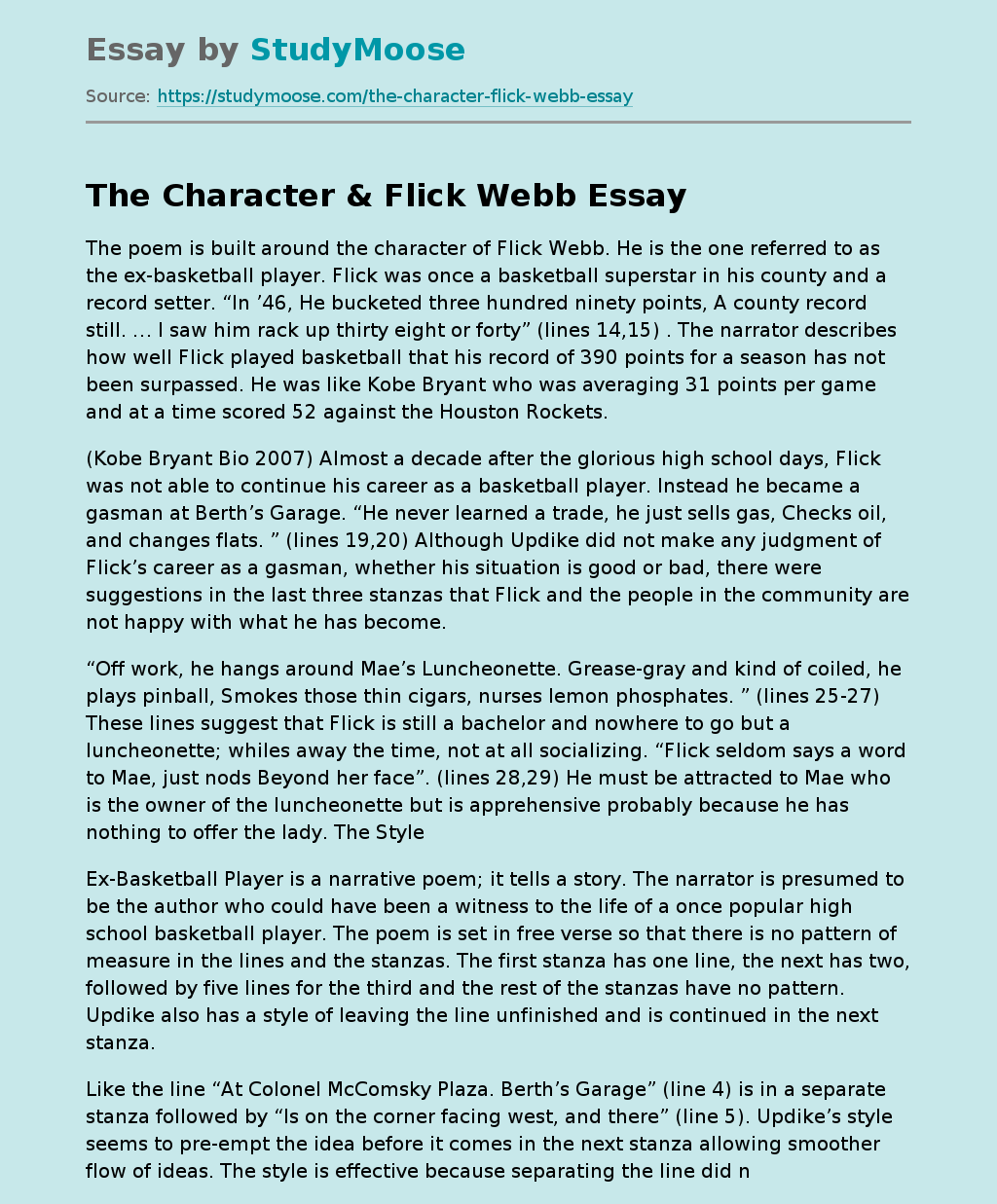