Summary of A Short Story The Kugelmass Episode

“The Kugelmass Episode” opens with Kugelmass, a middle-aged, unhappily married humanities professor seeking the advice of his analyst, Dr. Mandel. He is bored with his life, and he needs to have an affair. His analyst disagrees, however, telling him “there is no overnight cure” for his troubles, adding that he is “an analyst, not a magician.” Kugelmass then seeks out a magician to help him solve his problem.

A few weeks later, he gets a call from The Great Persky, a two-bit magician/entertainer who shows him a “cheap-looking Chinese cabinet, badly lacquered” that can transport the professor into any book, short story, play, or poem to meet the woman character of his choice.

Don't use plagiarized sources. Get your custom essay on
“ Summary of A Short Story The Kugelmass Episode ”
Get custom paper
NEW! smart matching with writer

When he has had enough, Kugelmass just has to give a yell and he is back in New York. At first Kugelmass thinks it is a scam, then that Persky is crazy, but for $20, he gives it a try. He wants a French lover, so he chooses Emma Bovary.

Persky tosses a paperback copy of Flaubert’s novel into the cabinet with Kugelmass, taps it three times, and Kugelmass finds himself at the Bovary estate in Yonville in the French countryside.

Emma Bovary welcomes Kugelmass, flirting with him as she admires his modern dress. “It’s called a leisure suit,”’ he replies romantically, then adds, “It was marked down.”’ They drink wine, take a stroll through the countryside, and whisper to each other as they recline under a tree. As they kiss and embrace, Kugelmass remembers that he has a date to meet his wife, Daphne.

He tells Emma he will return as soon as possible, calls for Persky, and is transported back to New York. His heart is light, and he thinks he is in love. What he doesn’t know is that students across the country are asking their teachers about the strange appearance of a “bald Jew” kissing Madame Bovary on page 100.

The next day, Kugelmass returns to Persky, who transports him to Flaubert’s novel to be with Emma. Their affair continues for some months. Kugelmass tells Persky to always get him into the book before page 120, when the character Rodolphe appears. During their time together, Emma complains about her husband, Charles, and her dull rural existence.

Kugelmass tells her about life back in New York, with its nightlife, fast cars, and movie and TV stars. Emma wants to go to New York and become an actress. Kugelmass arranges it with Persky that the next liaison with Emma is in New York. He tells Daphne that he will be attending a symposium in Boston, and the next afternoon, Emma comes to New York. They spend a wonderfully romantic weekend together, and Emma has never been as happy. Meanwhile, a Stanford professor, reading Flaubert’s book, cannot “get his mind around” the changes that have taken place to the novel: First a strange character named Kugelmass appears, and then the title character disappears.

When Persky tries to return Emma to the novel, his cabinet malfunctions, and she is forced to stay in New York. Kugelmass finds himself running between Daphne and Emma, paying Emma’s enormous hotel bills, and having to put up with his lover’s pouting and despondence, and the stress begins to wear him out. He learns too that a colleague who is jealous of him, Fivish Kopkind, has spotted Kugelmass in the book and has threatened to reveal his secret to Daphne. He wants to commit suicide or run away. But the machine is fixed at last, and Kugelmass rushes Emma to Persky’s and eventually back to the novel. Kugelmass says he has learned his lesson and will never cheat again.

But Kugelmass is at Persky’s door again three weeks later. He is bored and wants another affair. Persky warns him that the machine has not been in use since the earlier “unpleasantness,” but Kugelmass says he wants to do it, and asks to enter Portnoy’s Complaint. But the cabinet explodes, Persky is thrown back and has a fatal heart attack, and his house goes up in flames. …

He is conflict with himself. He is not happy with his second wife. He always wants to other woman. But he does not content with them because he does not know what he wants. Firstly he wants to romantics’ but he lives an affair with these woman. In briefly, he does not lead a life which he dreams. Mr.Kugelmass external conflict He is in conflict with environment. Because he is a famous professor, he does not want to be learnt his private life. If his private life is learnt his lifewill became worse. The people around his condemn him because of adultery and this ruins his reputation.

Humor is used in this story with a sense of total absurdness of events that occur in the story. These events range from Persky saying “If I throw any novel into this cabinet with you, shut the doors, and tap three times, you will find yourself projected into the book”. To the absurdness of Emma Bovary, from a famous piece of literature made in 1856, saying “Tell me about O.J. Simpson” and asking Kugelmass about other people, places, and events from the 20th century.

Summary of A Short Story The Kugelmass Episode. (2016, Apr 19). Retrieved from https://studymoose.com/summary-of-a-short-story-the-kugelmass-episode-essay 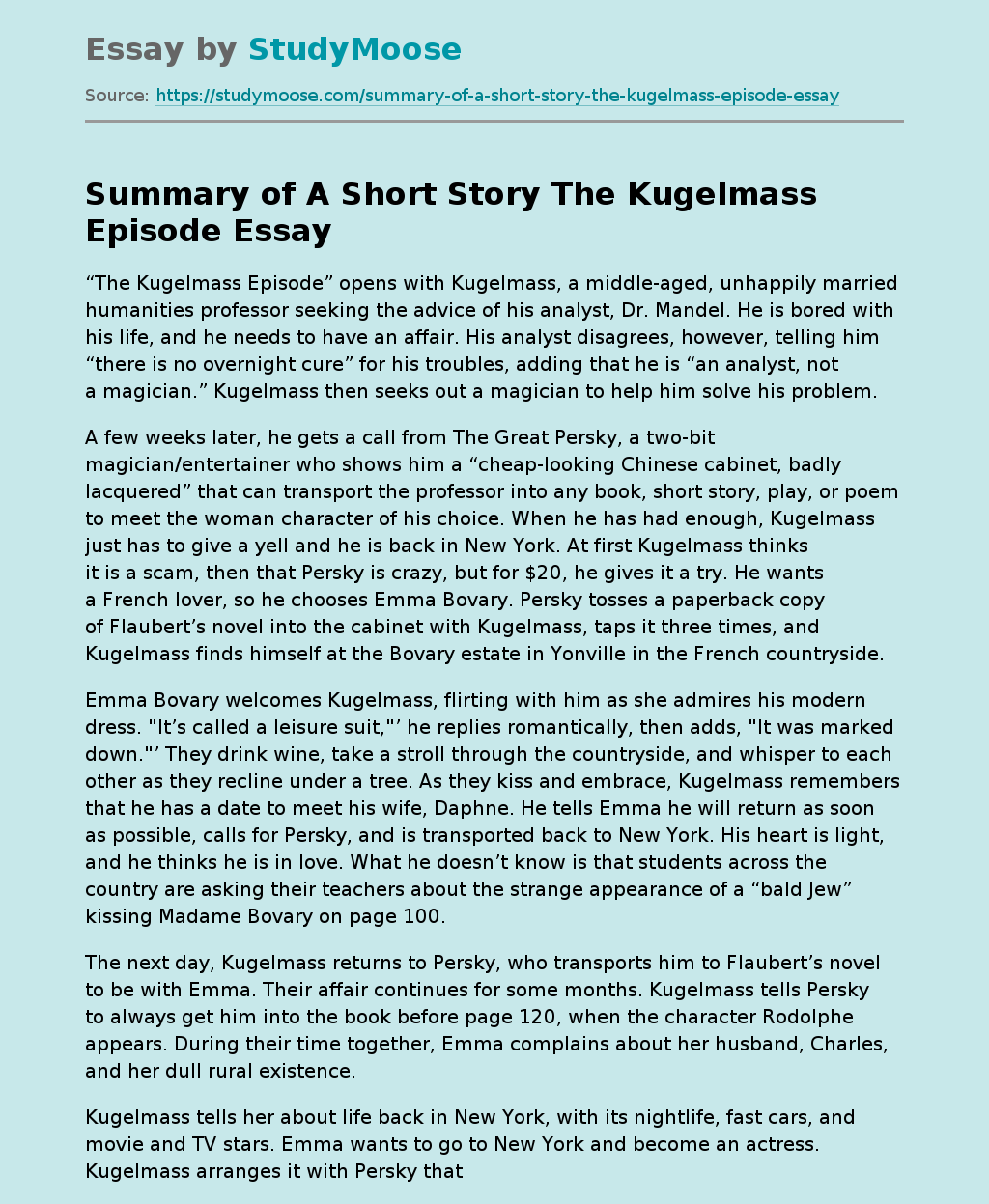