An Episode of My Life- Life of a Grade 8 Student

I woke up in the middle of the night after the weird noise coming from my brother Jake’s room. It was his alarm that made such noise. He has an important high school exam today. Apparently he thought that having a fire drill sound as his alarm tune would surely wake him up, it did but it woke all of us up.

After finally being able to sleep again, I woke up around eight o’clock. I was thirty minute later from the time when I usually wake up.

Don't use plagiarized sources. Get your custom essay on
“ An Episode of My Life- Life of a Grade 8 Student ”
Get custom paper
NEW! smart matching with writer

It is Wednesday, June 27th. The weather was extremely beautiful and warm, a typical June weather in L.A. After having breakfast and a nice cup of ice tea, I got ready for school.

Today was the last day of school so I wanted to enjoy it. I put on an over- sized sweatshirt and paired it with ripped skinny jeans while grabbing a pair of sneakers. I was never allowed to wear such kind of cloths in school, apparently my school is private and only accepts proper dress code.

Proficient in: Student Life In University

My dad’s driver drove me to school today because I was going to be late. Usually I just walk to school since it only takes me ten minutes.

Around nine thirty, I arrived at school. I entered through the front door and saw the crowd surrounding a seventh grader that was being bullied by a bully. This actually happened a lot after he arrived to our school. His name is Thomas Thomson and had been called names ever since last year.

He was a show off and had a bad attitude. The bully was Joe Kinderson. He always bullies younger graders and was expelled twice in one year. The only reason he is still here is because of his dad, the president of Kinderson Company. His dad’s company founded our school and that is why our school’s name is Roy Kinderson Academy.

Being in a private school had never been what I wanted. If I hadn’t fail grade five, I would still be in Rosemary public school that can give me at least freedom. That was not bad enough, because I got a D on two of my subjects for the past two semesters, I will have to be sent to a boarding school in England and live with my aunt Frowny after summer break. Aunt Frowny’s actual name is Juliana Frowren Williams. My brother and I gave her the nickname “Frowny” since she barely smiles to us.

First period was supposed to be French but Ms. Lewis our homeroom teacher decided to change it into science so she can give us a review quiz on what we learned this year. Our French teacher Madam Garcia was one of the nicest teachers in grade eight due to the fact that she barely gave us any homework and that she always has a big bright smile on her face.

Since today was the last day of school, we only had to stay in school until after lunch. We had recess after first period. My two best friends Trina and Elisa were with me along some other girls. They think that going to school in England will be a fairy tale but for me its definitely not.

Lunch was pizza and fruit salad. We had to help clean out the classroom before lunch.

Around one o’clock we were about to leave. I knew it would be the last time I ever see my friends and teachers so I left early. I didn’t want to get emotional since I was known as a girl who never cries. I will really miss my school but I can still contact people from my school using Facebook.

I got home a quarter to two. Took a shower and watched TV until my mom went home. She made me to go shopping with her and buy new cloths for tomorrow. Tomorrow is our family “Frienbely” day. It was a unique holiday my parents thought about when I was five. They wanted to celebrate the coming of summer break by hanging out with Jake and I as friends for a whole day. We thought it was cool at that time but that was because we were young.

As we were on our way to the mall, I had to tell my mom how my day went. I told her about the practice fire drill we had today and the whole morning of cleaning. She asked me if I took memorable pictures with any of my teachers and friends but I said I would still visit them in the summer.

The afternoon turned to be a disaster to me. I accidently went off to the wrong escalator and ended up bumping into the set where they were shooting a music video. The camera caught me spilling coffee onto my pants by accident and broadcasted it on the big screen in the mall. The embarrassing thing wasn’t this but my mom. She shopped at my favorite store and bought the exact same cloth I was wearing. She though it would be fun and would be perfect for tomorrow’s “Frienbely” day. Because my mom withdrawn five of her credit cards last week without knowing, my brother Jake had to come over to pay for her bills. He laughed so hard at both of us and laughed even harder when he saw the big screen playing over my coffee spilling moment.

Around seven thirty in the afternoon, my family went out for dinner after my dad returned from work. We had dinner at a famous Spanish restaurant since my mom is half Spanish. The restaurant wasn’t famous because of its extraordinary taste but by its reasonable price and its interesting arrangement of tables.

Dad bought cloths for the “frienbely” day as well. He told his secretary to get the same outfit that matched with the cloths Jake bought last week. I was going to laugh at Jake to get back at him, but I thought I would save it for the next time he makes fun of me.

After we got home just before eleven o’clock, I found Jake’s new girlfriend waiting for him by the back door of our house. Jake didn’t tell mom and dad about his new girlfriend because he just broke up with his ex- girlfriend last week and their relationship only lasted for two days. I didn’t tell mom and dad about Jake’s new girl friend because they promised me to buy me a new CD that mom banned me from listening to. They were going to sing at the karaoke club with a bunch of friends to have fun and relax after their two months of studying.

I went to bed at two AM in the morning. The new video game I bought last week kept me from sleeping early. After five minute, I slept soundly with a dream that led me to the uncertainness of tomorrow.

An Episode of My Life- Life of a Grade 8 Student. (2016, Oct 24). Retrieved from http://studymoose.com/an-episode-of-my-life-life-of-a-grade-8-student-essay 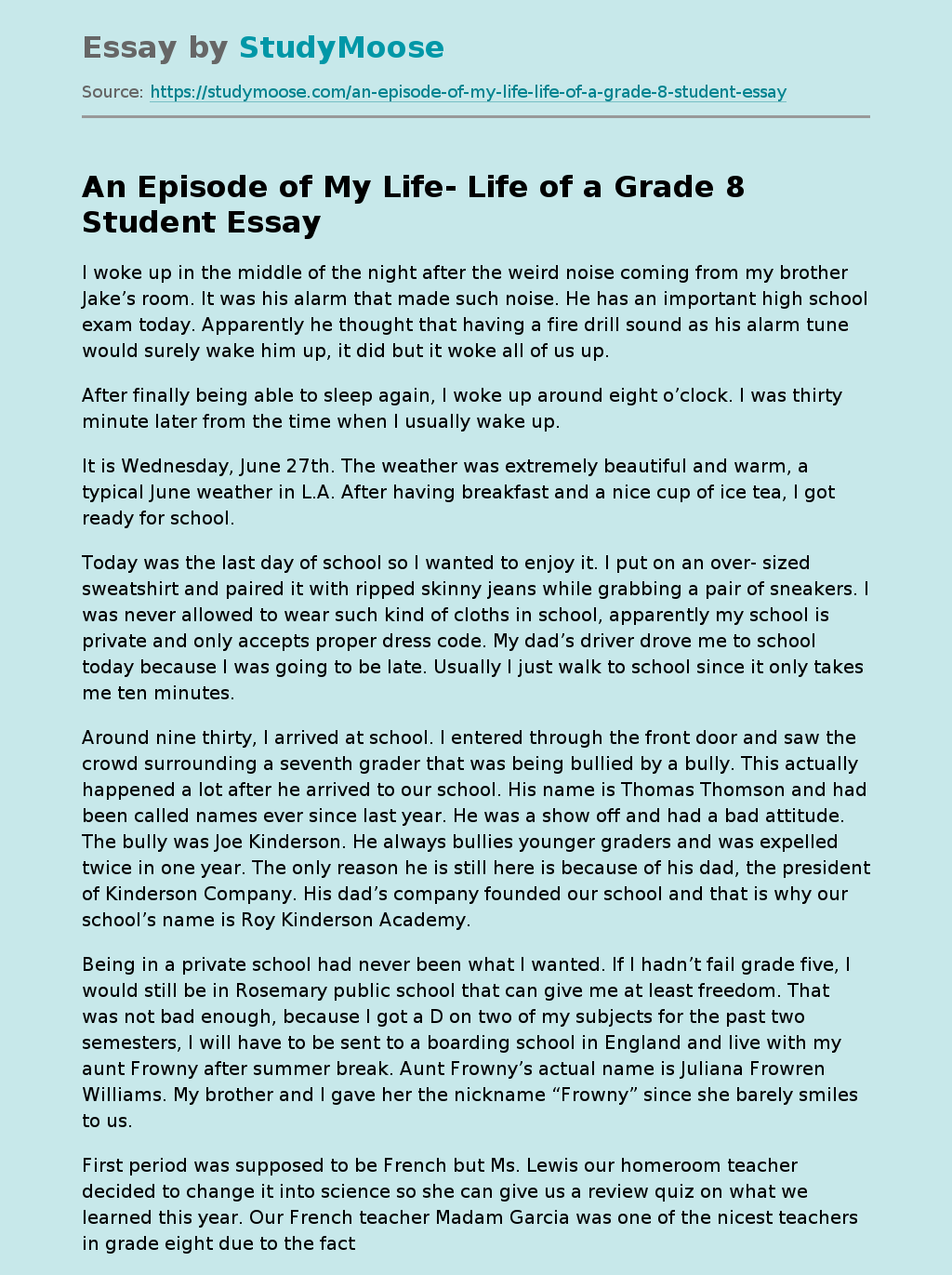