The Tall Woman and Her Short Husband Short Story Analysis

The short story ‘The Tall Woman and Her Short Husband’ by Fengi Ji-Cai focuses on community, power, status, judgement and persecution. This short story is based on the life of an inseparable couple that are persecuted and judged by people in their community. This attitude and judgement towards the couple is compared with the attitude from the country. The story is written by the neighbour’s point of view but not the couple’s point of view. This story is only written and spoken in a biased way and it is ironic that the couple do not speak, or give their view throughout the story.

Don't use plagiarized sources. Get your custom essay on
“ The Tall Woman and Her Short Husband Short Story Analysis ”
Get custom paper
NEW! smart matching with writer

Mr short is seemed to be ‘… a rubber roly-poly’ with ‘eyes like two high voltage light bulbs. ‘ Mrs Tall was heavily described as ‘dried up and scrawny’ with a ‘face like an unvarnished ping-pong bat.

‘ She was also described as ‘flat-chested,’ had a ‘ramrod back, and had buttocks as scraggy as a scrubbing board. ‘ The views of the couple are from biased views of the neighbours in their own community. The description shows that there is a contrast between the two. Mrs Tall is heavily described than Mr Short.

The views emphasize the ‘marked contrast’ between them, ‘BUT’ are inseparable. ‘ The conjunction ‘but’ used in the quotation emphasizes the love and the strong bond between Mr Short and Mrs Tall. There is a large use of visual imagery of the couples as the neighbours judge the couple by their looks.

Mrs Tall and Mr Short are compared to ‘a tall, thin empty wine bottle’ on the table, put next to a ‘squat tin of pork. ‘ This image is used as a piece of entertainment for the neighbours. Not only do the people of Unity Mansions judge Mr Short and Mrs Tall, the institute also accuses Mr Short of selling the manuscript. It is quoted that Unity Mansion was like a ‘microcosm if the country. ‘ This event allows the audience to sympathize with the couple, of how they are treated and described. The author opens a sense of irony in the story as he introduces the ‘Unity’ Mansion.

It is quite ironic that a judgemental, prejudice group of people are living in a communised place called Unity Mansions. The words unity and communism both mean united, but this is not what people in ‘Unity Mansions’ understand. The jealousy of Tailor’s wife also implicates her power. Her attitude towards the couple is NASTY, which allows the readers to sympathize with them. The neighbours find humour out of the couple when Mrs Tall holds the umbrella if it rains. They also find it humorous when it is ‘simpler’ for Mr short to pick it up if something had dropped. 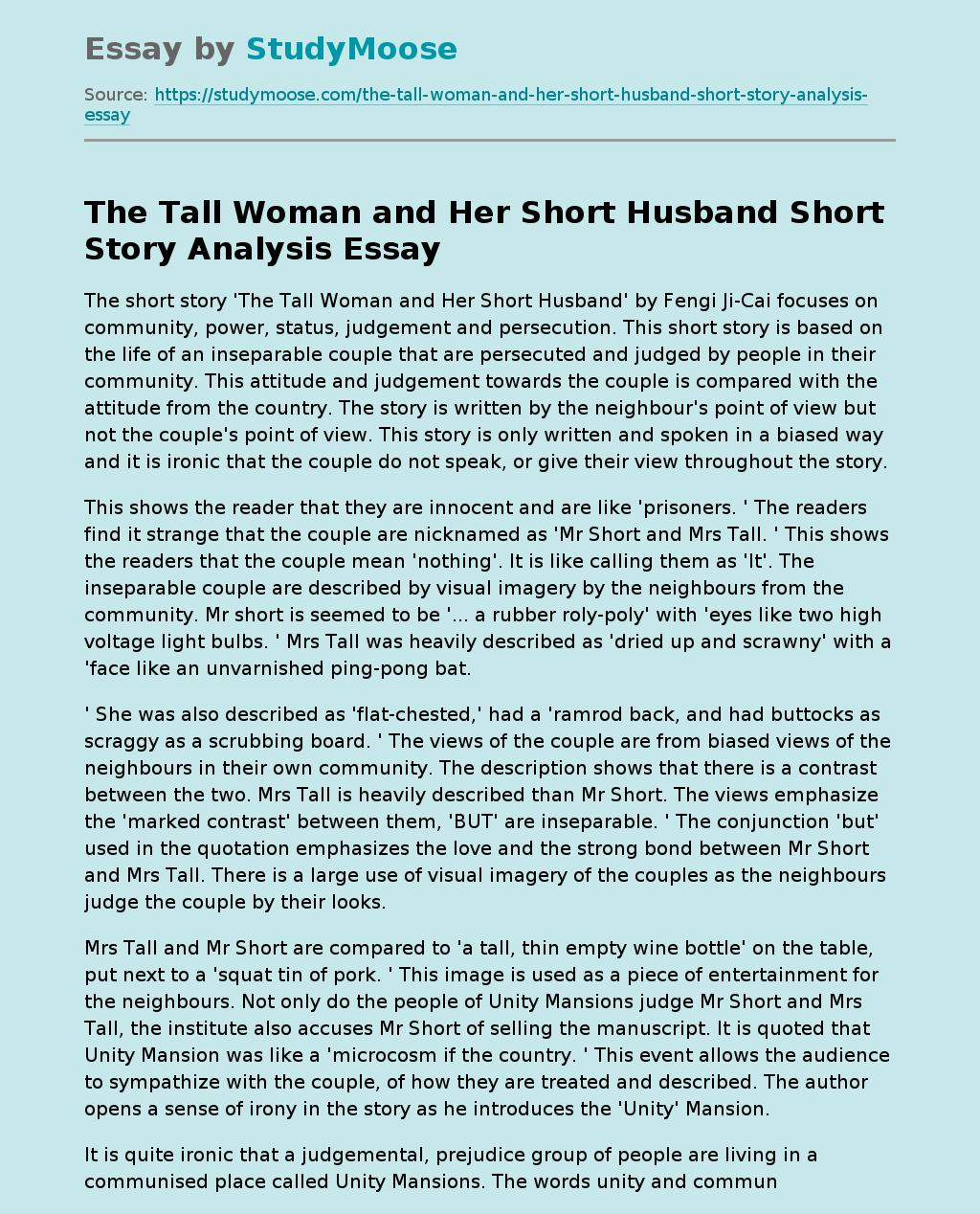