Age Cannot Wither Her, nor Custom Stale Her Infinite Variety

Nor Custom Stale Her Infinite Variety

In the production notes of Emily of Emerald Hill by Stella Kon, the writer uses a Shakespearean quote to describe Emily, “Age cannot wither her, nor custom stale her infinite variety”. This quote is actually from William Shakespeare’s Anthony and Cleopatra, Act II scene ii, used to describe Cleopatra’s agelessness and the many intriguing qualities she possesses. In this essay, I will aim to analyze the reasons behind the writer’s choice for using this particular quote to describe Emily and how it is relevant to the portrayal of Emily in the play.

Don't use plagiarized sources. Get your custom essay on
“ Age Cannot Wither Her, nor Custom Stale Her Infinite Variety ”
Get custom paper
NEW! smart matching with writer

The timeline of this play is not a single, continuous timeline, but rather a broken one that leaps back and forth in time to portray different scenes where Emily reflects and reviews the events that have come to pass.

It is through Emily’s reflection and review of her life that allows us to see how age has not withered Emily.

No matter what events have happened over the years, may it be the death of her son or the death of her husband, Emily stands strong and is undefeated by them. She tells herself bravely, “It’s all over now. It’s all past, it can’t be changed…” and still continues to look forward to living. The death of these two people in her life did not make her cling incessantly to the people around her, in fear of losing them. Instead, age and experience has taught her to let go of some things in life, one of which is her daughter, Doris, who was supposed to stay with her at Emerald Hill.

This time, Emily’s willingness to let go and allow the children to make their own choices paid off. She was able to maintain a good relationship with her only daughter and is satisfied to know that Doris is living happily in America. Her willingness to let go also brought her closer to her remaining 3 children, who are willing to come back to Emerald Hill to visit her frequently with her grandchildren even though all of them moved away. Towards the end of the play, Emily seems even more content with her life as she plays with her grandchildren and sees them grow up, even though the house and land she owns is slowly deteriorating. Age has not withered her, but rather allowed her to enjoy the bliss of family love. The writer was very appropriate in using this phrase to sum up Emily’s life, as we see Emily blossom from the unhappy young bride to the loving grandmother whom the grandchildren likes to visit. As Emily ages, her life becomes more fulfilled as she sees her children and grandchildren succeed and prosper in life. In this sense, Emily’s charm is ageless as her spirit did not grow old like her body. She remains optimistic about the future and enjoys every living moment she has with her family.

Throughout the play, Emily engages in a one sided dialogue with people that are unseen on stage. Through the contents of Emily’s speech, we are able to determine whom she is talking to and see the drastic changes in the demeanor of her speech. I believe that this is where “infinite variety” appropriately describes Emily as she assumes different speech stances with different people. This brings out the many different sides of Emily, for example – the busy housewife of the family, the upper-class lady, the caring friend, the loving mother, and many other different roles she has to take up to ensure that the family is well-cared for, like clockwork. The writer chooses to intersperse the conversations in a way that the conversations highly contrast each other and brings the readers to attention the countless “varieties” of Emily.

The interspersing of the conversations is very evident in Act One. In her conversation with Susie, she uses a lot of Singlish, such as “Ya-lah” and “ya” as she adapts an extremely casual tone. In the Singaporean context, her manner of speech may be even considered “aunty-like”, where she sounds like the common middle-aged Singaporean woman that we frequently encounter on the streets. From their conversation, the reader learns that Emily is extremely busy with the household errands whether it may be big or small. We come to see Emily as a busy housewife that is in charge of all that is going on in the house. However, as Emily makes her next call, her manner of speech is completely different. Not only does she do away with the Singlish, she engages a sophisticated and polite tone with the hotel staff. She gives off the impression of an educated upper-class lady, which is a huge jump from her previous “aunty-like” demeanor. Her next phone call goes to her best friend Bee Choo, where she assumes the same manner of speech as she did earlier on with Sophie. If the writer placed these conversations slightly differently, the effect would not have been as striking. The act of the writer “sandwiching” the hotel’s phone call with that of Susie’s and Bee Choo’s brings about the first hint of Emily’s “varieties”. Throughout the rest of the play, Emily generally uses her posh upper-class lady manner of speech to speak to important guests and the upper-class families she socializes with, while at the same time also retaining her “aunty-like” and casual demeanor when she is speaking to her family or close friends.

As we read on, we discover the many other “varieties” of Emily, of which there are 2 sides of Emily that stands out and contrasts each other – the sly Emily and the dutiful wife. I feel that it is in the convergence of these 2 sides of Emily the highlights the way where “custom cannot stale her infinite variety”. The first hint of these two qualities of Emily merging together is evident in Act Two, the part of the play where Emily celebrates her first Chinese New Year at Emerald Hill. In this part of the play, Emily slyly makes good use of tradition to get her sister and brother-in-law to pay homage to her. This event can be approached from two different perspectives. In the eyes of Emily’s mother and father-in-law, Emily is seen as the dutiful daughter-in-law who wants to pay her respects to her elders and make them happy, but in the eyes of Susie and her husband, Emily can be seen as the sly younger sister-in-law that forced them to kneel down to her. While the act of kneeling down symbolizes respect and reverence in Chinese tradition, in the context of Emily’s story, the act of Susie and her husband kneeling down to Emily actually symbolizes the consolidation of Emily’s position in the family as the head mistress. It is after this incident that Susie’s bullying stopped and the whole family came to view her as the woman of the household rather than the unseasoned young bride. In this part of the play, not only did the incorporation of a traditional practice not stale her, it elevated her charm and brought out even more captivating sides of Emily.

Another event that combines both the sly Emily and the dutiful wife would also be in Act Two, where Emily calls Kheong and tells him to send out the invitations if he still wants to carry on for the big dinner on September the fifteenth. This dinner was a family tradition started by her father-in-law to celebrate the end of the Japanese Occupation. On the surface, Emily is the dutiful wife who is still willing to help her husband host the big event despite his unfaithfulness. However, the hidden message here to Kheong is that no matter how much he wants to be with his mistress Diana Lee, he would never be able to properly present her to any important guests during these formal events as she is not his lawful wife. It is also made clear to him to make a choice between Emily and Diana as he comes to the realization that he would never be truly free of Emily’s firm grasp even if he does not live in Emerald Hill anymore. This is a prelude to Emily’s conversation with the audience later, “Look after your husband and family, yes: do everything for them, wrap them, bind them in the web of your providing, till they can’t lift a finger to help themselves: so that husband and son and sister-in-law must all depend on you, so that you control them and keep them in the palm of your hand.”

From the way Emily socializes with her guests at Richard’s party in Act One, it is clear that people accept and view her as the one and only hostess of Emerald Hill. It is these little things that she does (host parties, does his laundry, cook his food) as a wife to wrap and bind Kheong in her “web of providing”, even when he is living with Diana. Emily knows this very well, and she uses her status as the well-known hostess of Emerald hill to cement her strong standing as Kheong’s publically acknowledged wife. Her conversation with Kheong asking about the invitations may seem innocent, but she is actually slyly reminding him about the importance of her presence inside his life. Again, Emily uses tradition to triumph and win back her husband. Instead of helplessly watching her marriage break apart, she made use of the family’s traditional event to save her marriage. At the same time, she also used her role of the traditional wife who takes excellent care of her family in many different aspects to prove to her husband that she is indispensible in his life, may it be socially or privately. In her own words, she is truly “the very devil of a wife and mother”, which in itself presents to us infinite varieties of Emily.

Age has not withered Emily as her heart remains youthful and ageless, while custom was not only unable to stale her infinite varieties but had rather brought out Emily’s many intriguing qualities. As the material things around Emily deteriorate and diminish in quantity, her spiritual bliss is ever-growing as she remains unforgotten by her children and grandchildren. I think that the Emily now is assured of her significance and worth in life, and never afraid again of being thrown “back into the gutter”. 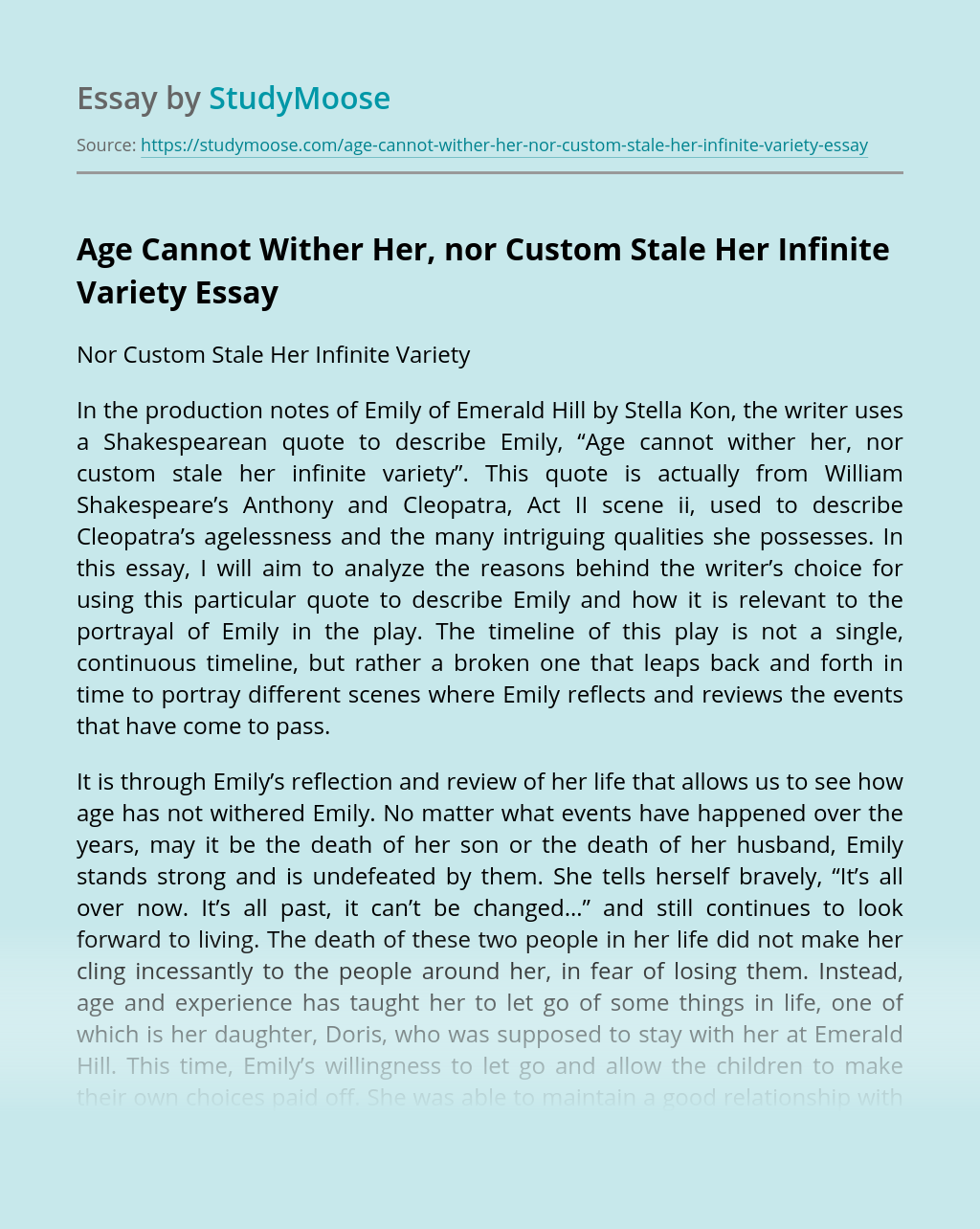