"The Landlady" by Roald Dahl

‘The Landlady’ is a short story about a young lad called Billy travelling to Bath on a business trip. He arrives in Bath in the evening and looks for accommodation. Bath was an unfamiliar place to Billy so he was unsure of the area. Billy was guided by a porter who recommended the ‘Bell and Dragon’ because it was close by, but Billy never went. Although the landlady offered cheap prices and cosy surroundings, she changes her attitude towards Billy as the story unfolds.

Don't use plagiarized sources. Get your custom essay on
“ “The Landlady” by Roald Dahl ”
Get custom paper
NEW! smart matching with writer

He then realises that this landlady doesn’t appear to be all that she seems to be. He begins to become concerned during his stay but never manages to uncover the landlady’s secret before she murders the young lad.

To create suspense Roald Dahl has set the time at 9pm when darkness takes over light. As dark represents evil the mood changes to an atmosphere of suspense, particularly if you’re unfamiliar with the area. This is exactly what happened to Billy and Roald Dahl therefore shows this as part of a beginning of suspense.

Proficient in: Matilda by Roald Dahl

The weather is an important part of the setting in which Roald Dahl creates a sinister mood. ‘The moon was coming up out of a clear starry sky’. This quote is associated with strange things happening creating evil as the atmosphere changes. When this changes a peculiar feel to the darkness begins to happen as the moon appears in a clear sky. It shows the start of a supernatural suspense, which the reader is determined to continue with this suspense story.

Roald Dahl develops a dramatic setting of the weather furthermore. To add more fear to the air the writer uses a simile in order to relate to a sinister subject. ‘The wind was like a flat blade of ice on his cheeks’. This shows that the wind was sharp and ‘deadly cold’. ‘Flat blade’ is associated with knives which is related to evil because it causes people to bleed when cut. Roald Dahl has shown ‘flat blade’ and ‘deadly cold’ to represent suspense in a ‘deadly’ way. This also sends a shiver to the reader making them focus glaringly.

“He didn’t know anyone who lived there”

This quotation shows that Billy is a lonely person in the strange city called Bath. So when assisting for help he would have nobody to turn to, not even his family. This shows that Billy’s mood isn’t so pleasant whilst being careful in an isolated area.

Billy was told by a friend in London saying that Bath ‘was a splendid city’. Roald Dahl has used past tense in this short quote to show that Bath was once a lovely city. This creates the reader feel wary about Bath and considers about the danger that may have happened to make Bath change. Except Billy did not know about the dangers in Bath and makes the reader to continue in order to find out Billy’s risks.

Billy is seventeen, his calm and relaxed as he ‘walks briskly’ through the streets of Bath taking no notice of the absence of his isolation. Billy is a new and inexperienced person at his job as a businessman. As Billy ‘walks briskly’ he notices that the houses were all identical and have been neglected, he could see that the ‘paint was peeling from the woodwork’. This relates back to as why Bath was a splendid city. The reader has been given another clue indicating a build up of suspense, because they now know that Bath is recognised as an abandoned city.

The pub ‘Bell and Dragon’ was recommended by a porter because it was close by, but Billy never went. Instead he glances at the boarding house with his ‘eye caught and held in the most peculiar manner by a small notice’.

Roald Dahl has used an alliteration to represent a sign of supernatural and the font of this quote indicates that the sign was almost shouting back at Billy, a supernatural force pulling him towards the boarding house. Inside the house Billy glimpses at the cosy surrounding whilst appearing through a window. This includes a ‘bright fire burning’, a ‘pretty little dachshund’ that was asleep beside the fire, and a ‘large parrot in a cage’. Animals are usually loving, that represents a sign of good. Billy had told himself this and that this will be a ‘descent house to stay in’.

The supernatural force finally compelled Billy to enter the front door and ring the bell. He was immediately confronted by the ‘Landlady’ as she answered the door ‘at once’. The landlady invited Billy with a ‘warm welcoming smile’. At the moment the landlady seems to be charming in order to get Billy’s invitation to come in. Billy finds himself as being a lucky lad, to find a cosy house to stay in, whilst being isolated and inexperienced in Bath. Also the prices are cheap, which makes Billy to stay for certain. The landlady has a friendly appearance, gentle blue eyes with a round pink face that shows she’s warm and caring, inviting Billy in this way makes him feel homely. Again the landlady uses her charm to determine Billy doesn’t leave, by removing an egg for breakfast to lower his costs.

Billy’s tension starts to build when he realises that there are no coats, umbrellas, and hats displayed near the front door. This is very strange considering it’s at a boarding house where you would expect to see visitors each day. However there are more extraordinary happenings that go on as the story unfolds.

‘You see, it isn’t very often I have the pleasure of taking a visitor into my little nest’

The landlady immediately changes her kind welcoming speech into something more dramatic and alarming, the quote above shows just that. She expresses this speech towards Billy quite madly, which indicates that her little nest is in fact her uncomfortable insaneness inside the boarding house. Additionally, if there were more guests that visit the landlady then Roald Dahl would not have written this quote in order to show the landlady’s secret. This is because ‘it isn’t very often’ that she welcomes a visitor to her insane secret.

This supernatural continues when Roald Dahl expresses the landlady to be more mad and ‘of her rocker’. Did she know that Billy was arriving? The bed sheets were clean, bedclothes had been neatly turned back, and a ‘hot’ water bottle was positioned between the sheets. Following the quote explained above and this supernatural I believe that the landlady is now very mad and Billy can now see this supernatural, which brings more tension to Billy and the reader as the story concludes.

The landlady eventually tells Billy to sign the guest book because ‘it’s the law of the land, and we don’t want to go breaking any laws’. Again the reader is reminded about the change of the landlady’s speech, where the reader instantly knows that what her secret is would be something against the law. However, Billy notices that there are only two names displayed in the entire guest book, which are also two years old. These names become very peculiar and strikes Billy as being familiar. As he struggles to remember where he’s heard the names before, the landlady brings him a cup of tea. The landlady again interrupts Billy as if she doesn’t want him to find out her secret and furthermore for him to leave so soon. However he seems to remember that one of them was an Eton schoolboy that disappeared, but she assures him that ‘her Mr. Temple’ was different.

‘They do? How interesting’

The way that the landlady conducts her speech is very clever. She answers Billy using a question, avoiding answering questions, which makes her speech more charming, ‘They do? How interesting’.

The landlady again reassures Billy with a cup of tea whilst interrupting him once again. At this point the reader starts to make assumptions about the landlady and why she keeps reminding Billy about the tea she has made. Suddenly the unexpected happens when the landlady tells Billy that both Mr Mulhalland and Mr Temple are still at the boarding house ‘together’. More tension builds when the landlady enters a silent stage as Billy drinks the tea. Billy is confused with this suspense, he is nervous ‘biting his lower lip’ and he tries to change the subject by commenting on a parrot in a cage, which he thought was alive but just realised it is stuffed, as well as the dachshund. Eventually, the landlady reveals that she herself stuffed the bird, and as she is a taxidermist she stuffs all her own pets. This immediately brings shock to the reader and by now they would have guessed the landlady’s secret and that she is psychotic, throughout the build up of suspense in the story. Whereas Billy only knows that the landlady is strange, mad and ‘dotty’.

The landlady gives Billy a reminder about signing the guest book, which he has already completed. She has given Billy this reminder because ‘she needs to keep a record of her victims’ that stay at the boarding house.

Roald Dahl doesn’t tell the reader how ‘The Landlady’ comes to an end, and he leaves them to create their own image of what will happen next. They have to pay close attention to the story to realise Billy’s build up of tension and supernatural suspense. The way that the Landlady constantly talks about how perfect her two other house guests have been, ‘There wasn’t a blemish on his body’. Also the way she talks about them in the past tense. When she tells Billy that she is a taxidermist the clues start to fit into place and the last paragraph, ‘Excuse me asking but haven’t there been any other guests here except them in the last two or three years?’, ‘No my dear, only you’, leaves the reader realising Billy’s misfortune.

The Landlady hasn’t been given a proper name, making her seem more mysterious. She is a middle-aged woman who lives alone and owns a bed and breakfast. She is ‘slightly dotty’ and her appearance is as charming as ever. However, the Landlady seems to fit this description right up until the end of the story. Only the clues that the last two guests were upstairs, the way she knew every little detail of how they looked but couldn’t remember their names and the fact that she was a taxidermist tells you that she isn’t the harmless woman we are led to believe.

Overall, I think that Roald Dahl is an excellent author and whether the reader is young or old, they are bound to be impressed by his effective wording, interesting, occasionally disturbing characters and his clever and gruesome plots.

"The Landlady" by Roald Dahl. (2016, Jun 20). Retrieved from https://studymoose.com/the-landlady-by-roald-dahl-essay 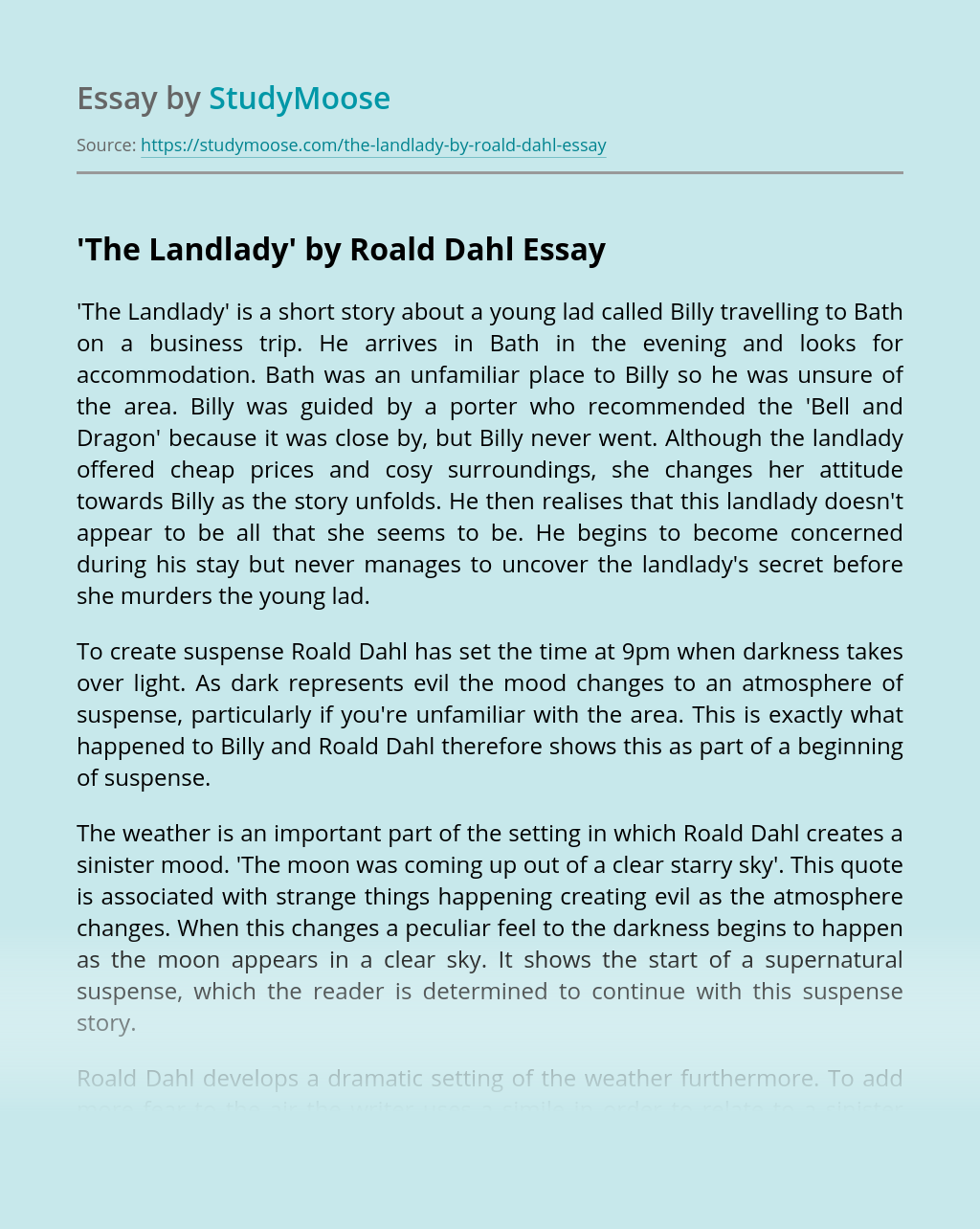