Roald Dahl was one of the most prolific and influential writers of the 20th century. He wrote for both children and adults alike. However, his adult stories usually have a lot darker topics.. In the short stories “Mrs.Bixpy and the Colonel’s Coat”, “Nunc Dimmitis” and “The Visitor”, Roald Dahl plays with the idea that physical attraction is stronger than emotional attraction and he reinforces the theme that those who betray, deceive and manipulate eventually do get brought to justice, through dark humor and suspense.

Justice is a deserved punishment or reward. In These short stories, there are characters who manipulate and use other people in unjust and immoral ways. In the story ” The Visitor”, a good example of a person like this is Oswald Hendryks Cornelius, or Uncle Oswald for short. He is introduced to us through the narrator who had just inherited his uncle’s memoirs. We read that Uncle Oswald was a seducer and a womanizer.

He had many affairs with women. As he was traveling to Jerusalem fleeing from a love escapade in Cairo, he met a rich Arab named Abdul Aziz. Uncle Oswald had seen that he had a beautiful wife and daughter. He couldn’t make up his mind of which one to seduce. Oswald later spent the night at his house. While he is sleeping a woman gets into bed next to him. Uncle Oswald ended up getting just what he had wanted, sex.

However, this time his promiscuous actions would catch up to him.

He later found out that the woman that he had slept with was neither Abdul’s wife or his daughter that he had met. He found out that he had slept with Abdul’s daughter that had leprosy. Abdul Aziz said, “There ́s absolutely nothing in the world for you to worry about. It is not a very contagious disease. You have to have the most intimate contact with the person in order to catch it.”(Dahl Vol.1 298) Uncle Oswald had been beaten at his own game. Instead of Uncle Oswald luring women into having sex with him, the daughter with leprosy had lured Uncle Oswald into having sex with her. Uncle Oswald then had to deal with the aftermath of having sexual relations rather than the woman having to deal with it.

In the story ” Mrs.Bixpy and the Colonel’s Coat”, an example of where justice is served to an unjust character is Mrs.Bixpy. She is having an affair with the Colonel. She would tell her husband that she was seeing her aunt in Ireland but she would actually go see the Colonel. He gives Mrs.Bixpy a very expensive mink coat as he tells her that their relationship has to come to an end. In order to get the coat with out any suspicion from her husband, she pawns it. She then tells her husband that she found a ticket from the pawn shop and for him to go see what the ticket is for. Just as she thought that her plan of manipulation and deception of her husband had worked, it took a turn for the worse for Mrs.Bixpy. Her husband handed her a very cheap stole, not her very expensive mink coat. Mrs.Bixpy knew something was off when she passed by her husband’s secretary. “Isn ́t it s gorgeos day? Miss Pulteney said as she went by, flashing a smile. There was a lilt in her walk, a little whiff of perfume attending her, and she looked like a queen, just exactly like a queen in the beautiful black mink coat that the Colonel had given to Mrs Bixby”(Dahl Vol.1 63). Mrs.Bixpy began to put all the pieces together and she realized that her husband was cheating on her. This is a surprise to Mrs.Bixpy because she thought that she was the one that was being clever. She then realizes that she was getting just as manipulated as she was to her husband.Justice was served in that Mrs.Bixpy realized that she was getting cheated on just as she had cheated on her husband.

Lionel Lampson in the story “Nunc Dimittis” seeks to serve justice through revenge. Gladys Ponsonby had told Lionel that his girlfriend, Janet de Pegalia, had called him a crashing boar. Lionel was very upset with this news. In order to get back at her, he gets John Royden to paint a picture of her. Because he paints in layers, Lionel is able to remove the paint in order to make her naked.Lionel said, “It was truely an astonishing sight! This woman, Janet de Pelagia, almost life size, standing in her underwear ‐ in a sort of drawing‐room, I supose it was ‐ with a great chandelier above her head and a red‐pluch chair by her side; and she herself ‐ this was the most disturbing part of all ‐ looking so completely unconcerned.”(Dahl Vol.2 93) To get back at her, he invites all of his friends and family over, including Janet. He hung up the picture of her naked for all to see it to get revenge at her and to do what he sees as justice. Janet de Pagalia decides to get revenge on Lionel and to do what she sees as justice. She mails him a jar of his favorite food, caviar. It is hinted at that she poisoned the caviar when Lionel said that he was not feeling well. The title of the short story “Nunc Dimittis” is Latin. Translated, it means ‘now you dismiss’. Dahl intended to use this title as it is an allusion to a story in the Bible. It is a reference to the Canticle of Simeon in which God tells Simeon that he would not not die until he had seen the messiah. When Mary and Joseph bring him Jesus, Simeon said “Lord, now you dismiss your servant; go in peace”(International Student Bible for Catholics Luke 2:29-32 ) The reason why Dahl used this title “Nunc Dimittis” was to hint at that there was going to be death in the story. From the reader’s point of view, this creates suspense as you know there is going to be death but you just don’t know who. A recurring Idea through out these short stories is that physical attraction is stronger than emotional attraction. This idea is portrayed in “The Visitor” through Uncle Oswald. Uncle Oswald has never gotten married and is never with the same woman for too long. He has the ability to seduce woman through his physical features. This is shown because when ” Oswald was aroused, something odd would begin to happen around the edges of his nostril holes and revealed whole areas of the bright red skin inside. This created a queer, wild, animalistic impression, and although it may not sound particularly attractive when described on paper, its effect upon the ladies was electric.”(Dahl Vol.1 292) 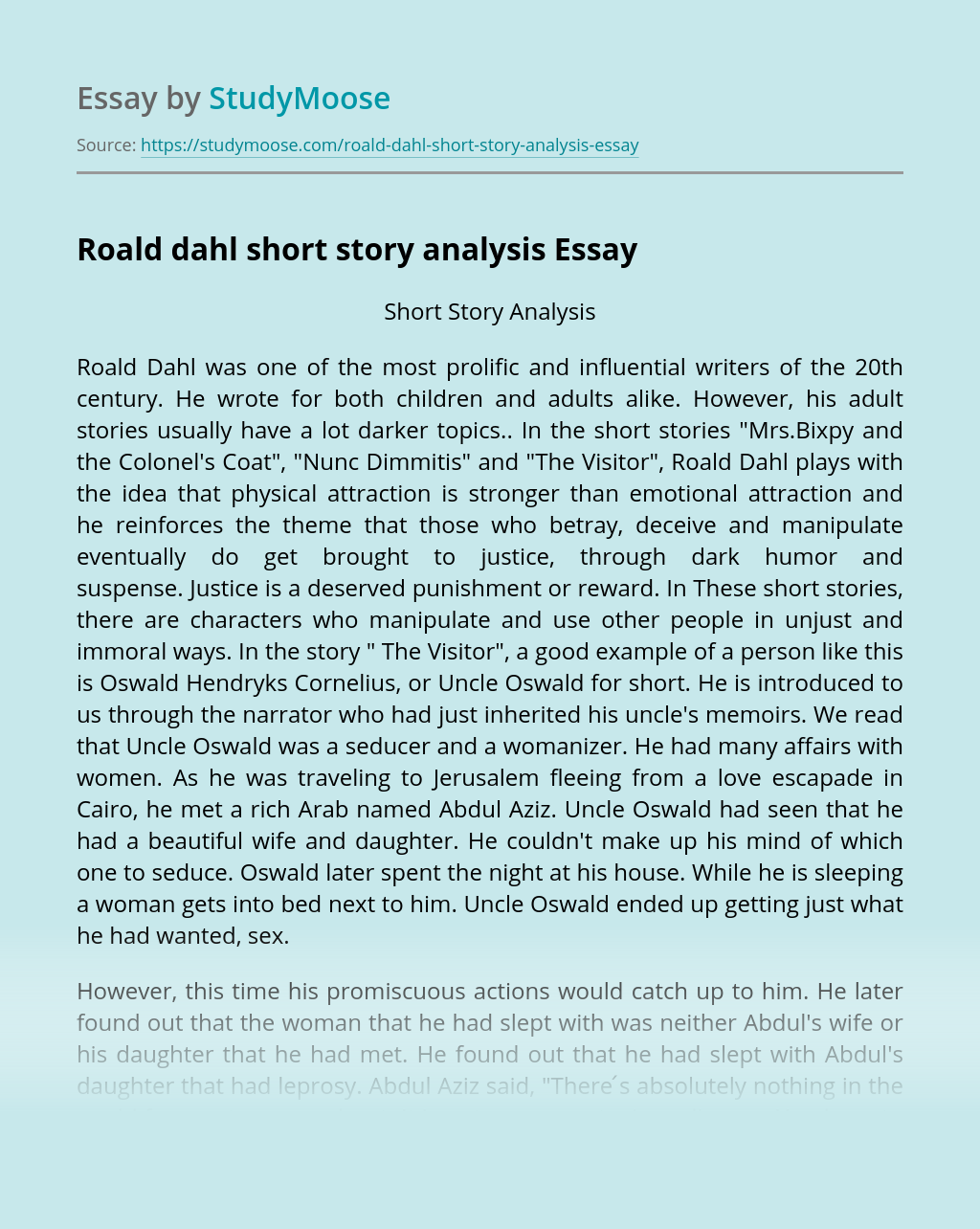