An analysis of Roald Dahl’s “Lamb to the Slaughter”

An analysis of Roald Dahl’s short story “Lamb to the Slaughter” reveals Roald Dahl’s work explores tensions inherent within marriage and divorce. The story depicts a tale of a loyal wife’s reaction to her husband’s betrayal. Throughout, the story you follow the abnormal day in Mary Maloney’s very wonted life. She makes the day abnormal by murdering her husband and shrewdly covering it up, without leaving a trace of evidence. In the short story, we are taught that we should treat others how we want to be treated or serious consequences will follow.

Don't use plagiarized sources. Get your custom essay on
“ An analysis of Roald Dahl’s “Lamb to the Slaughter” ”
Get custom paper
NEW! smart matching with writer

The author uses extensive use of irony, character and symbols as his primary elements of choice when writing this short story.

Irony is portrayed through Mary Maloney’s actions. She went to the store after she killed her husband; she acted as if nothing happened and gave the grocery clerk the idea that everything was fine. “Perfect she said he will love it” saying this gave Sam the impression that Mr.

Maloney is still alive. This was considered irony because the reader knows more about what takes place then some of the characters in the story. The clerk thinks Mr. Maloney is at home waiting for dinner, but really he is lying down dead and he clerk is speaking to his killer, his wife. Another example of Irony is when the police officer are eating the leg of the lamb and one says “Probably right under our noses”. This is irony because the evidence to solve the case is being eaten and they don’t even know of it also it is actually right under these noses because there eating the lamb.

Mary Maloney carefully arranges her story in order not to throw suspicion on her. This is why you also treat people the way you want to be treated because irony can always come back on you.

Ronald Dahl used characterization a very important component in the story that develops the protagonist both directly and indirectly. Nevertheless, the use of indirect characterization is more leading because it reveals her actions and how she deals with her disagreement. First, she seems like a classic housewife longing for her husband’s arrival, but something is strange about this meticulous day; “There was a slow smiling air about her, and about everything she did was curiously tranquil the eyes, with their new placid look, seemed larger, and darker than before”. It was almost as if she is expecting something unusual to occur, and that she is preparing for that definite moment.

In addition, her actions adjust from being a wife satisfying husband, to a self conscious lady that wanted to kill her husband. Also, in the start of the story she is described as a harmless, undamaging individual, but immediately after her husband reveals his burden, she becomes uneven and almost naturally she hits her husband. “simply walked up behind him and without any pause she swung the big frozen leg of lamb and brought it down as hard as she could.” And as bizarre as it seems, she goes somewhat through phases from being a happy housewife, to a maniac, obsessed woman. This is how character is shown through the story.

The lamb symbolizes Mary Maloney, a woman overcoming her weak point. A lamb is a extremely weak animal that spends its time following a herd. Mary Maloney is a stay at home pregnant wife who does everything for her husband, makes his dinner, makes his drinks, and does just about all for him. Also, it is great humor that Mary uses an incredibly frail animal a leg of lamb as a weapon in the ‘slaughter’ of her husband. By doing this, she overcomes her frail lamb status. Also, the lamb goes to slaughter when she feeds the proof of the lamb to the police. This symbolizes the destruction of the weak life she has always known to have. She is left a dominant, prevailing woman, who can now go on in living as a mother, a powerful figure. “And in the other room Mary Maloney began to giggle. This shows that she is proud of what she has done and does not regret it at all.

In this short story irony, character and symbolism are portrayed in great detail. Dahl also allows the reader to understand that mistreating people will always result in bad karma. Dahl excellent use of irony leaves the reader ambiguous yet concentrated on the her unique style. In the development of the the characters in the story, Dahl chooses carefully her approach. By indirectly leading the reader to each characters personality, the reader gradually comes to identify their types. Lastly Dahl simple symbolism effectively ties Mary’s characters weak points. All and all the authors use of irony, character and symbolism is accurately conveyed throughout the short story.

An analysis of Roald Dahl’s “Lamb to the Slaughter”. (2016, May 29). Retrieved from https://studymoose.com/an-analysis-of-roald-dahls-lamb-to-the-slaughter-essay 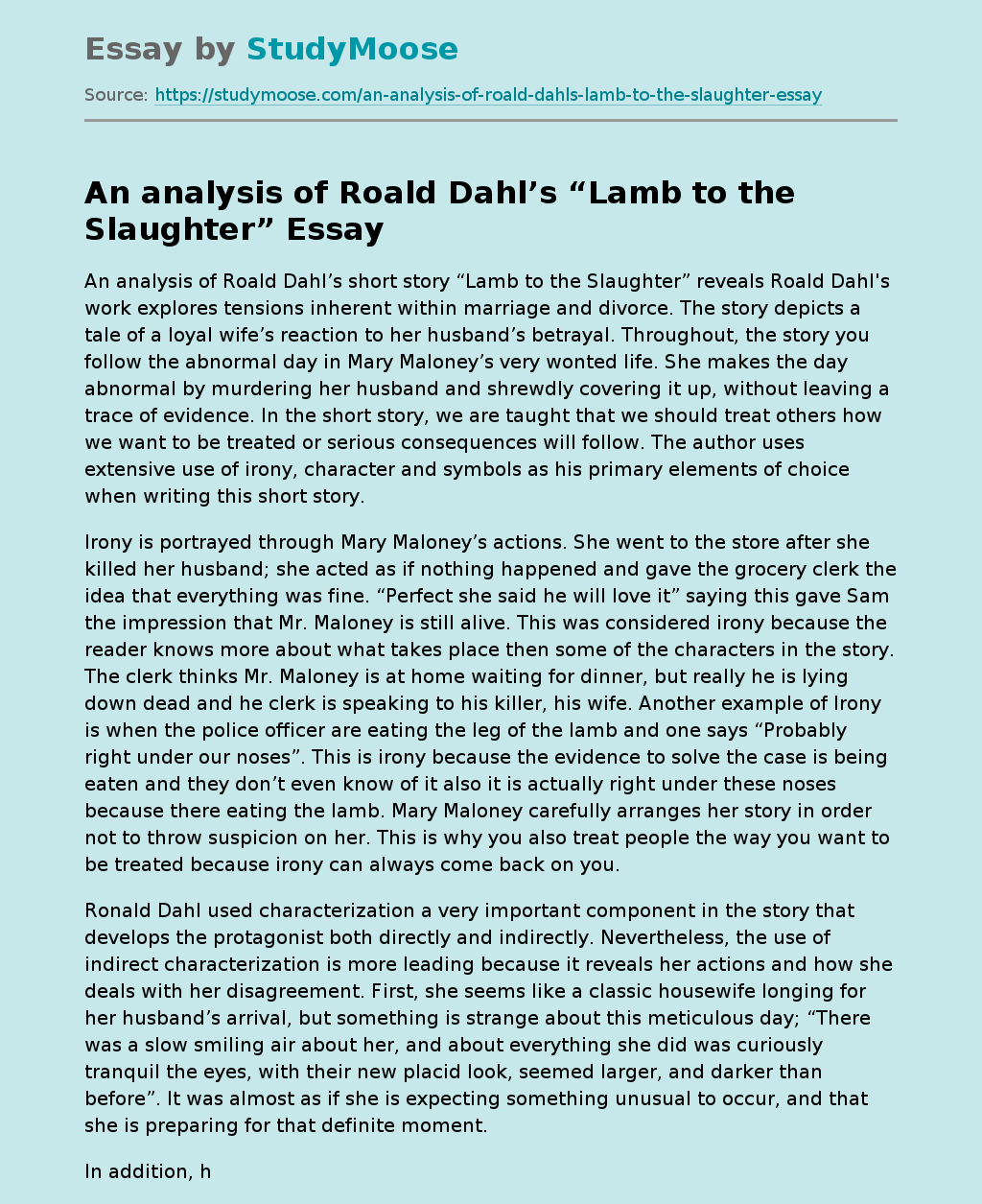