“A person who has good thoughts cannot ever be ugly. You can have a wonky nose and a crooked mouth and a double chin and stick-out teeth, but if you have good thoughts, they will shine out of your face like sunbeams and you will always look lovely.”

Roald Dahl Roald Dahl has written numerous children’s books in his career as a writer. He had fun playing around with words, inventing new ones.

Don't use plagiarized sources.
Get Your Custom Essay on My Favourite Author Just from $13,9/Page

He always capitalized on his humor, never failing to think to think out of the box. He always wrote from the point of view of a child. Roald Dahl was an acquisitive reader in his younger days. According to him, “An autobiography is a book a person writes about his own life and it is usually full of all sorts of boring details, this (Boy: Tales of Childhood) is not an autobiography” These words brought a smile on my face.

I love Dahl’s silly yet creative style of writing. His book ‘Boy: Tales of Childhood’, is a favourite of mine. It is a memoir of Roald’s childhood. I find it utterly fascinating. This autobiography contains incidents about his childhood. He was born in Landaff, Cardiff, Wales, in 1916. He attended The Cathedral School in Llandaff. One of the events in this book is when he was eight. His friend Thwaites among his four friends was spanked by the headmaster for putting a dead mouse in a jar of hard candy, called ‘gobstoppers’ at the local sweet shop, owned by Mrs.Pratchett, an old woman whom Dahl described as “mean and loathsome”.

Roald and the other four boys called the “Great Mouse Plot of 1924”. Along with his passion for literature, Dahl also developed an interest in photography; it is one of my favourite hobbies too. Roald Dahl was made captain for school fives and squash teams, and he also played football, his exceptional height helped him. In ‘Boy: Tales of Childhood’, Dahl also said that the chocolate company sent over boxes of new chocolates to be tasted. The chocolates were expected to be rated and commented on, be it the flavor or the enhanced needed in those chocolates. Roald wished to earn the praise of Mr. Cadbury himself. This wish of his gave him the inspiration to write the amazing book, ‘Charlie and the Chocolate Factory’. Roald had also said that he originally did not plan to include children in his book at all! But he changed his mind when his nephew said to him, “Uncle Roald, I do not like it a bit.” Another book, ‘Matilda’ is the second of my favourites of his books. It revolves around Matilda Wormwood, a girl who had an immense love for reading. Matilda, because of her parents’ ignorance towards her, taught herself to do things like cooking and reading.

Her parents considered her a nuisance, who, according to them, should’ve been watching more television and reading fewer books! To add up to this, Matilda’s headmistress, a horribly cruel woman, Miss Trunchbull who believed Matilda’s father’s words indicating that his daughter-Matilda- was not well-behaved. Matilda later discovers magical powers within herself, powers that, with practice, allowed her to levitate things, with just a glance in its direction and a little concentration. This book is about how Matilda teaches her parents and headmistress a lesson, and makes friends with Miss Honey in the process. I have observed that Roald Dahl’s books for children, quite typically, comprise of evildoers who hate little children. These wicked people are either simply villains or tremendous gluttons.

These characters or stories can also be a metaphor for the abuse the older boys put him through. His books also usually contain dark humor. These wicked people are usually punished for their evil, wicked deeds. Some of Roald Dahl’s other well known children’s books are, The BFG, The Twits, The Witches, Fantastic Mr. Fox, James and the Giant Peach and Charlie and the Chocolate Factory. Dahl joined the RAF (Royal Air Force) as an aircraftsman. He married actress Patricia Neal fourteen years later after his involvement in wars, and they had five children. Roald Dahl died in 1990 of leukemia. Though Roald Dahl is no longer in this world, the magical worlds created by him in his wonderful, or, in his words- phizz-whizzing!-books, and characters will always live on. Roald Dahl will always be my favourite author.

My Favourite Author. (2016, May 08). Retrieved from https://studymoose.com/my-favourite-author-essay 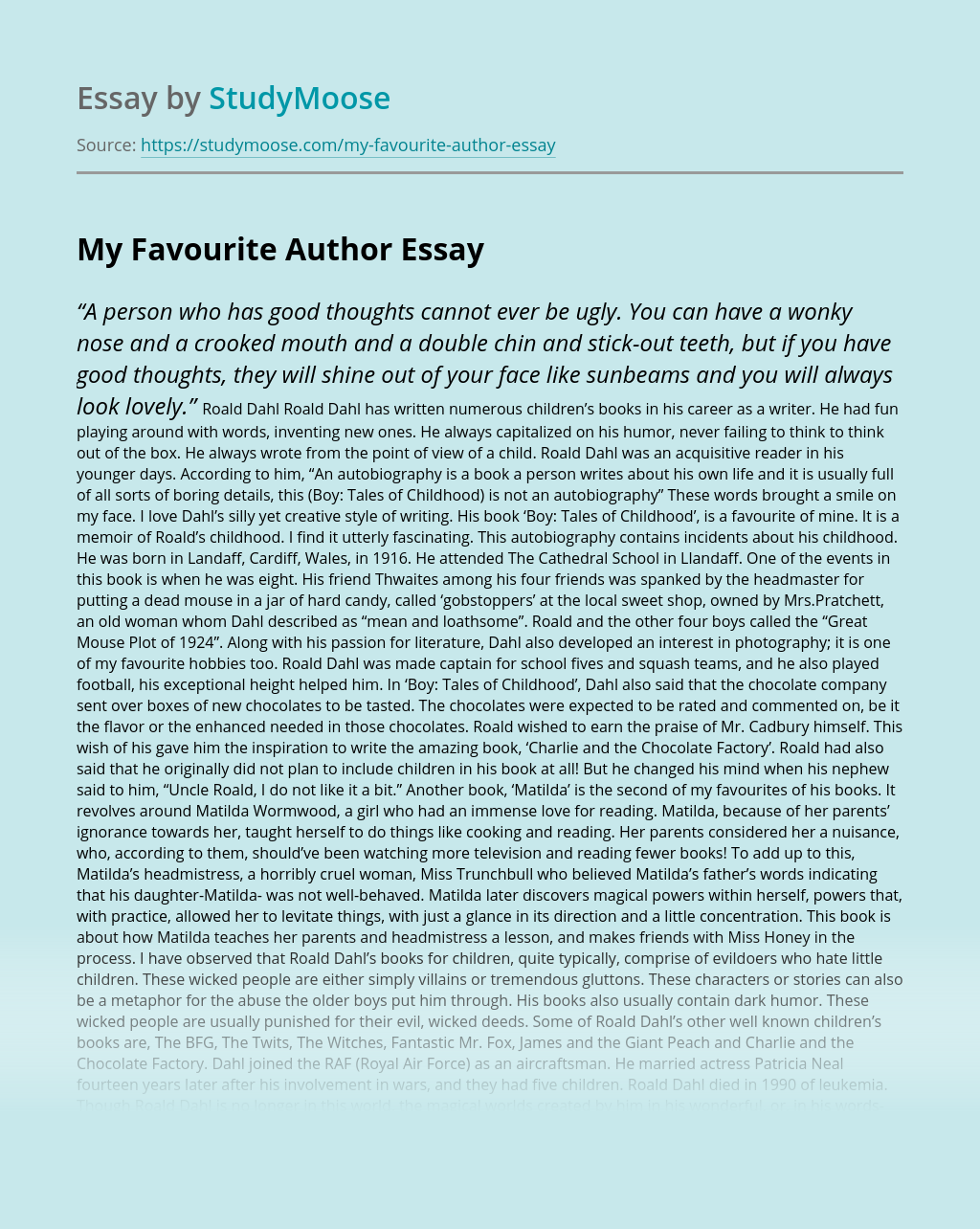 "Matilda" and How She Belongs

Rate this post The film Matilda is a clear representation of the concept of belonging, the ideas that are conveyed in the film are relevant to belonging by how they are displayed. The ideas of belonging in Matilda are that Matilda doesn’t belong in her family, Matilda finds a sense of familial belonging with Ms...

Rate this post Despite an individual’s desire to belong to a group or community, this is not always possible. More than anything else, belonging is about finding a sense of place in the world. Belonging Matilda has a sense of belonging when with her school peers/friends and when she is with Miss Honey. When at...

Rate this post I. Type Of Story Matilda is a children’s novel by British author Roald Dahl. It was published in 1988 by Jonathan Cape in London, with illustrations by Quentin Blake. The story is about Matilda Wormwood, an extraordinary child with ordinary and rather unpleasant parents, who are contemptuous of their daughter’s prodigious talents....

Rate this post “A person who has good thoughts cannot ever be ugly. You can have a wonky nose and a crooked mouth and a double chin and stick-out teeth, but if you have good thoughts, they will shine out of your face like sunbeams and you will always look lovely.” Roald Dahl Roald Dahl...

Comparison of Matilda Cook in Fever 1793

Rate this post Mattie’s Life and Changes In Fever 1793, by Laurie Halse Anderson, sixteen year old Matilda (or Mattie) Cook changes dramatically over the course of the book. In the beginning, she is portrayed to be a young selfish girl who was always too lazy to work. By the end of the book, she...