Too smart for her own good, is a legendary saying used for people that are so smart that at the end of their life it can be dangerous for them. In the fantastic story Matilda written by Roald Dahl, the author describes a young girl’s life that is affected by lack of love and affection and her being too intelligent for her age and time.

Don't use plagiarized sources. Get your custom essay on
“ “Matilda” by Roald Dahl Review ”
Get custom paper
NEW! smart matching with writer

It was the beginning of summer in 1993 the climate was starting to get hot and the Wormwood family didn’t pay much attention to Matilda and her incredible abilities. The local color and verisimilitude of the setting consists in the typical modern-day English village, lots of houses with gardens full of flowers infront of each house, people walking their dogs in the street, cars passing by, kids laughing, happy people all over the place, Matilda’s friends running around following their lost red ball.

Proficient in: Matilda by Roald Dahl

Matilda Wormwood, a remarkably bright little girl, had taught herself to read at the age of three; by the age of four she had pored a dozens of times over the only book to be found at her parents house, Easy Cooking.

While her mother was playing bridge all day and her used car salesman father was at work, Matilda walked to the public library and read books all afternoon. Matilda’s parents were both so warmless and so wrapped up in their own silly little lives that they failed to notice anything unusual about Matilda.

Afterward, Mr. Wormwood decided to take Matilda to school; in school Matilda found lots of friends and two special teachers, Miss Honey the gentle teacher and Miss Trunchbull the head teacher, a harsh and ruthless woman. Miss Trunchbull treated the kids awfully in her school, so Matilda with her extra powers decided too!

Those who carry out the most important actions in a story are considered main participants. Matilda is the only main personality in this story, she is young girl that loves reading. Matilda suffered a lot at the beginning of the story because her family didn’t love her the way she wanted to be loved. Matilda went to Crunchen Hall school. Full description of this character is provided during the story, in her physical description we find that she is a little short for her age (five years and a half), brown hair, brown eyes and skinny. Compared to Miss Trunchbull, a character that do changes in the story, Matilda doesn’t change at all, she is a static personality. Another character found in this selection is Miss Trunchbull. She is fully described physically during the story, she is big, ugly, fat, harsh, ruthless, and mean. Miss Trunchbull is a dynamic character. She hates kids and is the head teacher of Miss Honey one of the teachers in Matilda’s school. Miss Honey is another secondary character. She is the typical nice and gentle teacher, that every kid in school loves. She is also fully physically described personality, she has brown hair, brown eyes, tall and skinny. She is a static character. Last but not least we find Mr. and Mrs. Wormwood, Matilda’s insensitive, careless and selfish parents. They are not fully described and they are static characters. The conflict of the story begins when Matilda discovered her magical powers. The story’s struggle was about to be solved when Matilda starts using her magical powers to the people that didn’t treat her nice, like Miss Trunchbull and Matilda’s Parents. Foreshadowing is not included in this selection. The action that determines the conflict’s solution is when?

The Wormwood family, Miss Trunchbull and Miss Honey make up the conflict of the story. The story’s conflict is external and internal; external because the Wormwood family don’t pay Matilda much attention; and internal because Matilda needed love and since her family didn’t give it to her she suffered a lot inside. There is also a conflict character against characters as Matilda has problems with her parents and with Miss Trunchbull. In this story, Matilda, is an example of a young girl with magical powers that at the end she uses this incredible abilities against ! I would like to believe in magical powers but I think in reality it doesn’t exist, but ….. you never know. Is there another life after this one? Who knows, but then again I can’t prove it doesn’t either. I liked this book. It was enjoyable, fun to read and brought up some interesting questions in my mind that are not easy to answer. I recommend this book and other “children’s fictions” to students of my age that appreciate these kind of stories that have a little fantasy. 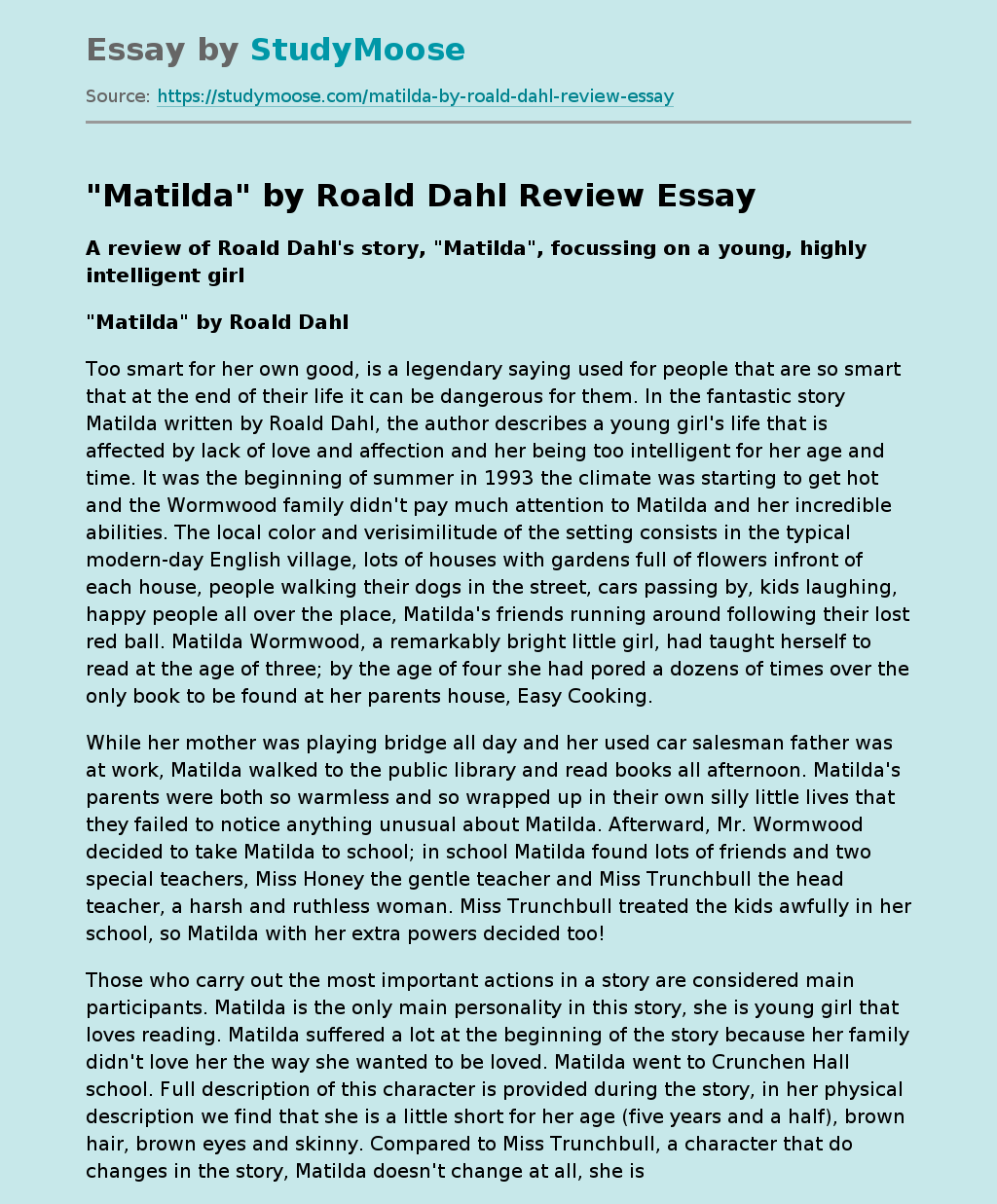