Sherlock Holmes is a well known detective, in a series of stories written by Arthur Conan Doyle. All of the stories go into great detail as to what life was like in the Nineteenth to the early twentieth century. The stories I have been studying are named ‘The Speckled Band’, ‘The Man with the Twisted Lip’ and ‘The Copper Beeches’. In this essay I will be covering the four main points of the three stories that I studied. The four main points are characterisation, the structure of all three stories, descriptive writing and the use of clues and red herrings in order to find out why the stories still appeal to use as modern readers.

Don't use plagiarized sources. Get your custom essay on
“ Sherlock Holmes Description ”
Get custom paper
NEW! smart matching with writer

To many, Sherlock’s appeal is in his eccentric personality, but his methods draw in alot of admiration from a vast number of readers. Sherlock’s methods separate him from many other detectives, as they are very unique to him and are relevant to his character.

“No, but I fancy I have deduced a little more” He is very observant, which many of the other methods rely upon, from his observations he has an almost supernatural ability to deduce hidden clues. “He is a genius, a philosopher, an abstract thinker.

He has a brain of the first order” Although there is a certain arrogance to Holmes he still has every respect for his opponent, he will never underestimate them and always tries to become familiar with the villain and his mannerisms, before apprehending him. “There is no one who knows the higher criminal world of London better than I do” Holmes had an amazing knowledge of almost every high profile criminal in London, a skill which he exploited to his advantage. “My profession is its own reward” being a detective was not only Holmes’ job it was also his livelihood, his obvious enthusiasm is crucial in his success.

Characterization is one of the many things that Arthur Conan Doyle is excellent at, he goes into great detail into what the characters personalities are like. For example “Carriage driver: ‘he is a man of immense strength and absolute uncontrollable anger… ” This quote taken from ‘The Speckled Band’ and is describing Dr. Roylott, I think it is trying to help you to imagine what Dr. Roylott’s personality is like without actually going into great detail. Arthur Conan Doyle seems to use this technique of giving you a brief idea of what the characters are like before going into great detail.

Here is a quote taken from ‘The Copper Beeches’: “I am very anxious to consult you of to whether I should or should not accept a situation that has been offered to me as governess… ” This quote shows Violet (the woman consulting Holmes) is anxious and indecisive, polite and educated, As you can see it is very easy to gather lots of information from such short quotes that is just one of the many things I love about Arthur Conan Doyle’s work. The structure of the stories is pretty much what makes or breaks the stories for you because the structure of all the three stories I read are all the same.

The structure of the stories

For example they all start off with an introduction which gets the base of the story followed by the development in which the story just goes a bit further on and Sherlock has an idea of the suspects. After the development is the denouement where the crime is solved and everybody is given justice. The reason why I think the structure of the stories makes or breaks them is because some people might like to know how it is going to end but others may not like knowing the fact that the crime is always going to be solved.

The descriptive writing helps to set the scene and helps the reader to visualise what the place is like or what the people or objects are like. For example, “the building was of gray… stone, … and the curling wings like the claws of a crab,” This quote was taken from “The Speckled Band” and it is describing the house that they are approaching, I think this quote is one of the best descriptions out of all three stories I read because it is trying to put the point across that the house looks very aggressive and gives you the feeling of being trapped.He will never take interest into a boring, straightforward case instead he always pursues the more challenging and irregular cases, which also makes the stories so popular. “The left arm of your jacket is splattered in no less than seven places” Holmes observational skills were very important in his success, as all of his clues had to be factual, Holmes worked very much upon data and evidence which usually he had observed “ah, I have no data”. Holmes was a very open minded detective he did not set upon one idea until there was enough evidence to back it up.

How to use a simile

It is also a great example of how to use a simile. Another use of descriptive writing is from “The Man with the Twisted Lip”, “A thick fog… dark, shapeless burs… yellow wreaths. ” I love this descriptive writing quote in the story it is describing an alley way. Without the clues or red herrings there would be no Sherlock Holmes so that is why I personally think clues and red herrings are the most important things in the Sherlock Holmes stories. Red herrings may lead you astray into thinking that it was somebody/something else when in fact it is not and sometimes can be quite the opposite.
The reason he narrates the stories is reasonably straightforward; he is the bridge in between the readers, and Holmes mind. Dr Watson is a vital character, he is the one who still keeps the mystery in Holmes’ quests, if it were Holmes narrating it would bring away all mystery; as we would read into his mind. “I cannot yet see any connection” being a doctor he is a very intelligent man, but Holmes continually outsmarts him, he is made to look very unintelligent. This adds to the greatness of Holmes having someone around to show his superiority.

For example, “I may add that his whole debts… use far as we have been to ascertain, amount of  10s, while he has 220 standing to his credit. ” This quote is taken from “The Man with the Twisted Lip” and the person speaking in this quote is St Clair’s wife, and I think this red herring is very miss leading because it is making you think that he has stolen the money and doesn’t want to use it yet or something else along those lines but it is very misleading.

However clues help you to understand the story more and sometimes build up the tension, for example “The centre door was closed… e in fastened one of the broad bars of an iron bed. ” This clue is taken from “The Copper Beeches” where it is telling you that the door was closed and had been fastened with an iron bar so this clue is telling you that there must be something behind that door that nobody should know about. So in conclusion, my opinion the most important thing out of the four main points is the clues and red herrings because without them there would be no Sherlock Holmes. Sherlock Holmes is renowned for its great misleading red herrings and mysterious clues that keep you thinking. 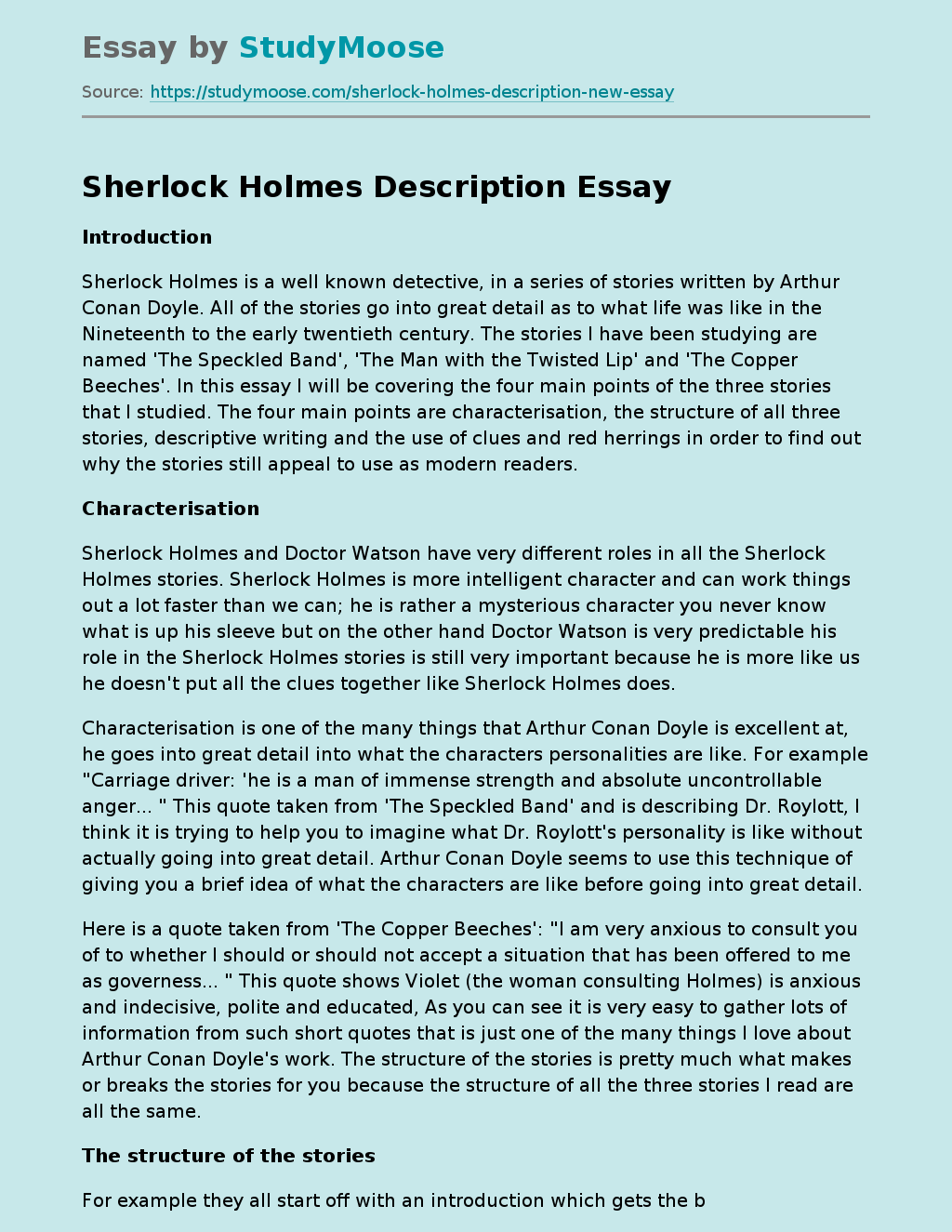