From the case study of The Financial Detective, 2005 the objective is to place the correct company to match the given financial data and ratios. I will analyze and compare the financial ratios of the companies in each industry and interpret them to identify the correct company.

Company A is Johnson and Johnson (J&J) as it is evident based on its financials. The cost of goods sold is twice as higher as Company B because J&J has a very broad range of products that would require many different resources and suppliers.

Don't use plagiarized sources.
Get Your Custom Essay on The Financial Detective Just from $13,9/Page

J&J has a high inventory and receivables turnover mainly because it is reflecting its mass-marketing strategy. Also because J&J mass markets its broad line of products, they have high net fixed assets as they produce in large amounts of volume that would require many manufacturing facilities and equipment in order to produce all of their products.

J&J has a much higher ratio of cash, short term investments and receivables that is evidence that it has cash on hand and large production facilities. Company B is Pfizer and clearly has a much higher ratio of intangibles that comes from their patented products which has led them to higher premiums to support their robust R&D budget. Cost of goods sold is lower because they produce more over the counter products that do not require any further extensive research.

Company C is Anheiser-Busch which owns a numbers of beer-related businesses they have acquired which corresponds to their very high debt ratio at 51.19% to be able to finance these acquisitions. They also have a high amount of net fixed assets needed to manufacture their products in their many breweries and theme parks. Company D is Boston Beer because they have such a smaller net profit margin due to their smaller production in volume. Even though they have higher prices, it takes more resources to produce their seasonal and year-round beers and therefore their SG&A expenses are greater than Company C. They have a great percentage of cash and current assets as they are financially conservative and aware of their cost-savings strategy.

Company E is Dell, clearly because they exclusively do mail-order and built-to-order PCs allowing its customers to design their own products. Due to their strategy in passing on the cost savings to the customers, they have lower SG&A as compared to Company F. However, Dell purchases many of its products manufactured by its many suppliers which is why they have a high accounts payable. Company F is Apple as it has a higher Beta than Dell due to its dramatic decline in market share making it more risky than the rest of the market. The company is led by its charismatic founder, Steve Jobs, and is one of the highest competitors in the market because of its innovative products and retail store presence.

Company G is Amazon based on its online presence description. Amazon’s net profit margin is high because sells to customers through its vast retail presence that offers a variety of merchandise with discounts which has helped them earn higher profits. Their inventories are lower because their strategy is to keep low inventory to reduce the possibility of risk due to new product launches, changes in customer preferences, etc. Their beta is significantly higher because they haven’t been around as long as Company H. Company H is Barnes and Noble and because of their presence in retail stores, they have a higher net fixed assets and higher inventories because they must keep their stores and warehouses well stocked in order to meet customer demands. Their high intangibles accounts for their various trademarks also.

Company I is International Paper and has higher intangibles due to owning numerous packing-product facilities. Depreciation went up as they experienced a net loss because of the closing of inefficient mills. Company J is Wausau Paper and has higher inventories because it is such a smaller firm that it must carry sufficient inventory to meet customer demand. They also have lower fixed assets because they purchase the wood fiber used in its products on the open market

Company K is Snap-On as it is a global manufacturer and marketer of tools and has a lower percentage of receivables because it sells its products primarily to retailers, wholesalers and distributors which may have faster and regular payment terms. The company also has a higher net profit margin due to not incurring as much costs associated with maintaining a sales force. Company L is Black and Decker as it obviously has higher SG&A expenses as they market their products via its own technical representatives and mobile franchise dealers. Their receivables are also higher which can be attributed to the financing it provides to its customers.

Company M is Wal-Mart as evidenced by their known low prices and high volume-oriented strategy. They have high net fixed assets with Company N close behind because they are continuing to expand their network of distribution centers. Their inventory turnover ratio is high as they are able to replenish inventory quickly due to having so many distribution centers. Company N is Target because it is more of an upscale discount store as opposed to just focusing on low prices. Their receivables are significantly higher than Wal-Mart’s because they offer credit cards to qualified customers.

Company O is Lee and has a higher net profit margin because it is a fierce competitor with low threat. Company P has a significant amount of intangibles due to acquisitions. 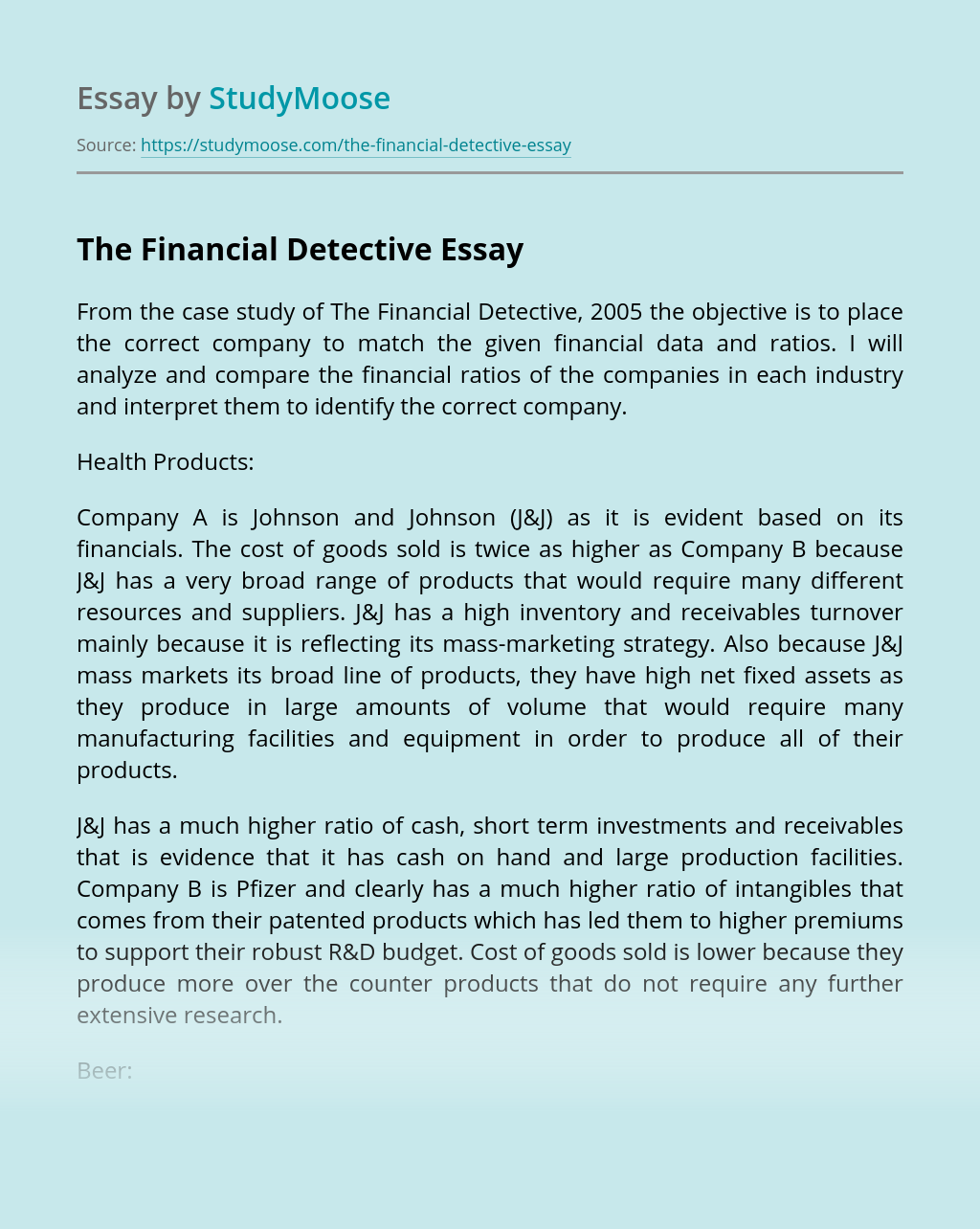 Rate this post What an utter disaster. What should have been a dignified occaion to mark my husband’s crowing, has ended up with confusion. His first great ceremonial state banquet has been ruined. The guests arrived and were asked to take their places. To begin with things seemed very organised. then all of a sudden...

A Saying Every Cloud Has a Silver Lining

Rate this post Good afternoon to Ms. Cheryl and my classmates, the topic for my interpretive speech today is ‘Every cloud has a silver lining’. This is an idiom which carries the meaning of – it is always possible to get something positive out of a situation, no matter how unpleasant, difficult or even painful...

Get Essay
Liberty of Thought and Discussion

Rate this post John Stuart Mill: John Stuart Mill (1806-1873), British philosopher, economist, great liberal (or libertarian), moral and political theorist, and administrator, was the most influential English-speaking philosopher of the nineteenth century. His views are of continuing significance, and are generally recognized to be among the deepest and certainly the most effective defenses of...

The Most Wonderful Time of the Year

Rate this post Stop me if you’ve heard this one: “I can’t stand the Christmas season. Initially they begin calling it Xmas, then you have actually got this Santa fellow who is generally a middle-man between the toy companies and the gullible household that purchases $20 pieces of plastic crap for their newly-greedy brats. Now...

Rate this post Many people often wonder what it was the plunged the world into World War II in 1939. Many of the reasons that the world could have been dragged into such a war are because of the ways that many people handled their situations. If people would have handled their issues such as...