Twenty-first century detective stories are blooming with action, conflict, mystery and so on. But this is only recent development. There is a lot more to it than most people think. From a French man named Vidocq to the creation of modern detective fiction by Edgar Allan Poe, until today’s development of detective stories and its characters. So what made Poe such an important figure in detective fiction history, and in what way did his creation develop after his death? In my study I will try to answer these questions to the best of my capabilities.

Don't use plagiarized sources.
Get Your Custom Essay on Evolution of Detective Fiction Just from $13,9/Page

People started to take interest in crime stories in the early 1800, caused by their fascination and fear of crime. It was the town folks that started to romanticize criminals, as well those who stood up against them: “The first writing on urban crime pretended to be documentary, but it was filled with archetypes and plots from preceding fiction, particularly the gothic novel” (Marling 2). The detective as a figure first saw light in the early nineteenth century.

Eugène François Vidocq who is considered to be the father of modern criminology and the first private detective wrote Memoirs of Vidocq which inspired writers like Viktor Hugo’s Les Misérables and Honoré de Balzac’s Le Pere Goriot in creating first of many detective figures based on Vidocq. Of course there were other writers, not just crime stories but novels as well, to whom Vidocq served as an inspiration. A good example to this is Charles Dickens novel Great Expectations.

The main and most important difference between the earlier mentioned crime stories and Poe’s Murders in the Rue Morgue is that they didn’t construct their story/case around the detectives: “Before Poe, the early crime stories did not revolve around the individual detective “(freewebs editor 3). Crime Fiction is essentially about the solving of a crime, usually a mystery of murder. Crime Fiction texts question what it is to be human and raise questions about identity. (freewebs editor 1) When Poe created Dupin, most of his very own traits were given to the character. Since Poe himself didn’t believe in the supernatural neither did Dupin, giving him a far more realistic view of things, which I believe essentially gave the detective a big step ahead of others when solving a case. In “The Murders in the Rue Morgue” Poe introduces three of the basic motifs of detective fiction. First is the wrongly suspected man, secondly the crime in the closed room and finally the solution by unexpected means. It is also important to note the Dupin outsmarts the police by solving the case, which is an element that if not all but certainly most detective storie’s adopted.

In The Purloined Letter the reader gets to know another favored element of the detective fiction: recovery and safe keeping of the “document(s)” needed to ensure the safety of one or more important individuals. In order to make sure Dupin succeeds in this task, Poe introduces yet again important motifs known to the detective fiction: the outsmartingdeceiving of other genius minds, the finding of the evidence in the most obvious place and the use of disguise. Although the element of disguise might not seem so evident at first reading, I am most certain that the use of the green spectacles in order to deceive D—serves as an early version of using clothing or other accessories in order to misguide another character. In the third story of Dupin, The Mystery of Marie Rogêt, Poe introduces the method of recreating a crime by recollecting and putting together newspaper reports of the same case. While Poe’s greatest detective fiction will be the one’s presenting Dupin, we must take a step in taking in to notice Poe’s other two works Thou Art the Man and The Gold Bug readers are familiarized with new motifs from the repertory of detective fiction: the criminals spirit breaks and confesses when he is faced with the enormity of his crime, misguidance by following the wrong clues and the climaxing moment when that the criminal is the least likely suspected person.

And of course all five stories have the common unexpected ending which was common to gothic novels in Poe’s time. We must not forget however that there were a few other detective stories in which Dupin makes his appearance even though they weren’t written by Poe. Such stories are like: The Vanished Treasure and The Fires in the Rue St. Honoré which appeared in a collection of seven short stories by the publisher Mycroft & Moran, The Murder of Edgar Allen Poe by George Egon Hatvary, etc. The interesting fact about most of these stories in which Dupin makes an appearance is that he either meets or gets regarded as being Poe himself Just as Vidocq in his own time, Poe’s writings served as role model for the new detective fiction, but unlike Poe who introduced the reader to a new type, a reformed detective story, the new generation of writers kept and used the new motifs and elements which Poe created. None other could serve as a better example for this than the most widely known detective in world, namely Sir Arthur Conan Doyle’s Sherlock Holmes. In my personal opinion Holmes serves as the best comparison to Dupin.

They represent the perfect rivals in what I’d like to call “who’s the better detective”. In order to make my point in why Dupin is the superior I’ll point out a few of their similarities. First and most likely observed by all readers that both detectives are presented by a narrator who just happens to be their best friend. Like Dupin, Holmes uses cold logic in the solving of the cases. While today’s detectives seem to be more calm and appear to have part in way more action, Dupin and Holmes isolate themselves, they are eccentric, somewhat egoistic and they both enjoy smoking the pipe. But most importantly in their stories the focus is on the case and the solving of the puzzle rather than putting the main protagonists in the middle of the action. While few say that Holmes is a copy of Dupin, most would consider Holmes to be the perfected version of his superior.

In A Study in Scarlett Holmes sidekick Dr. Watson makes a comparison between the two detectives: “Now, in my opinion, Dupin was a very inferior fellow … He had some analytical genius, no doubt; but he was by no means such a phenomenon as Poe appeared to imagine.”(Doyle 24). I believe that most important trait of Dupin that separates him from the other detectives is that he wasn’t exactly a role model for the mentally stable. This of course is the effect of the loss of his inheritance. While Holmes himself wasn’t the charming kind of fellow one might choose as friend(he was addicted to cocaine, stayed up for hours walking around or playing on his violin, making smelly chemical experiments and he even fired off his gone sometimes), his bad habits were of his choosing and making so it wasn’t nearly as bad as Dupins case. Of course Holmes isn’t the only one to be created in Dupins image. Hercule Poirot created by Agatha Christie in one of the characters on which Dupin had a huge impact.

In the 20th century the detective fictions have considerably changed in the way they are seen. This of course is due to the new generation. Most of the younger generation lack the imagination to fully understand and enjoy such works as The Murders In The Rue Morgue or Sherlock Holmes due to the fact that they lack action. Today’s generation is used to all the constant action and violence thanks to TV and PC games. So as these factors changed society entertainment industries took on new elements. Since recent years haven’t produced any film adaptations about Dupin, I’ll have to stick with Sherlock Holmes. The new movie, while still being a detective story, can be easily put into the genre of action.

Consider the movie to be most enjoyable despite the fact that it completely lost the book’s magic. With all its stunning visuals and extreme action scenes it is hard for me to find it anything nearly as the book. I believe that the only thing which is kept in it is Holmes himself. Holmes remained the same seemingly mad but genius and efficient detective I got to like from the book while Watson became a 19th century action hero. One must know the detective fiction motifs in order to identify them in the movie, but I assure that they are present.

In conclusion, detective fiction is a genre still under development, since new elements are only starting to emerge and all is thanks to the drastic change of technology and way of thinking. But this doesn’t mean that it will surely develop in a positive way. There are way too many factors that play a part in it, however we take our part in preserving the bases of this great genre and putting our own ideas to it in while to make it even greater. But this is question only time will answer and the people who work on it. 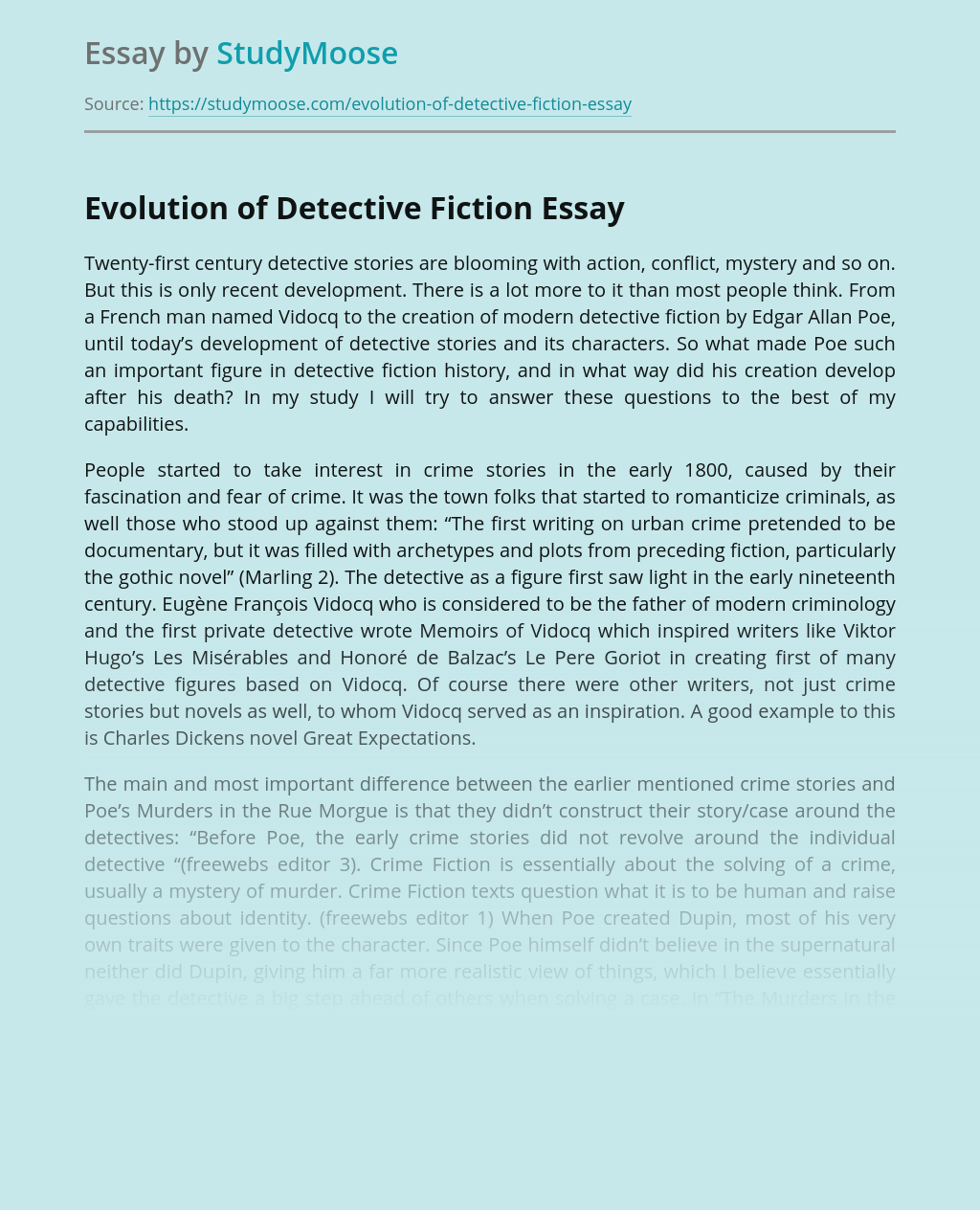 What are the basic facts? Merck & Co. Inc. is one of the world’s largest pharmaceutical companies in the world for producers of prescription drugs. Merck had sales of 1.98 billion and net income of 307 million in 1978 and continues to steadily rise. Merck invested hundreds of millions of dollars each year in research...

Throughout the innovation of the factory, the most crucial characteristic was effectiveness; producing as much as possible, as quick as possible. Since of the need for staff members in the factories, owners started using women, 2 examples remaining in England and Japan. Men in control, low wages, duties for families, ages of employees, long working...

My name is Corey Smith from Class 5A . The theme that my group was tasked with was technology, and my topic is “What are the effects of cyberbullying on teenagers?”. My first source is a newspaper article “Cyberbullying is a growing threat” by Andrea Martin-Swaby, which was published June 25, 2016. My second source...

Challenge is a major theme in the novel 'The Messenger'

Challenge is described as a difficulty in a job or undertaking that is stimulating to one engaged in it (dictionary.com). Markus Zusak’s ‘The Messenger’ constantly refers to this theme by putting the protagonist, Ed Kennedy, through challenges that will test him physically, emotionally and intellectually; one just as challenging as the next. One of the...

Gordan Allport, a psychologist in 1936 found that an English language dictionary contained more than 4,000 words that described different personality traits. He separated these traits into three levels: Cardinal traits, Central Traits and Secondary Traits. Cardinal Traits are the dominate traits in a person’s life, often to the point that the person becomes known...