The purpose of this case is to become a capital budgeting analyst and evaluate which set of free cash flows for 8 projects will result in the most effective investment for a firm’s capital. The objective given is to rank the four best that the company should accept. The case is broken down into three separate steps including the given information about estimated cash flows (inflows & outflows), determining the appropriate discount rate, and evaluating the cash flows using the IRR (Internal Rate of Return), MIRR (Modified Internal Rate of Return), NPV (Net Present Value), and other metrics.

Turn in your highest-quality paper
Get a qualified writer to help you with
“ The Investment Detective Ranking Company’s Projects ”
Get high-quality paper
NEW! AI matching with writers

Each project is chosen solely on the basis of the quantitative analysis. Here are some factors to consider for this case: Each project has the same initial investment of $2 million; in addition, all are believed to be of the same risk class. The managers have determined that projects 7 and 8 are mutually exclusive. The issue is that the WACC has never been officially estimated and in the past the discount rate has been assumed at 10 percent (however, certain officers have asserted the discount rate to be higher).

Ranking projects simply through the inspection of cash flows is inadequate due to the time value of money and cost of capital of companies; the only piece of information that can be derived from looking at the cash flows is the amount of time it would take to be paid back (regular payback period). There are several capital budgeting tools that can be used, including IRR, MIRR, and NPV.

These three can be used to see if a project exceeds the expected rate of return or the cost of capital for a company. We also refer to payback, discounted payback period, and a profitability index to help assist the decision-making process for which projects should start to commence. In addition, qualitative factors must be considered for any project given outside of this case, to cover the bases and have successful implementation. A company could find that having a negative NPV is acceptable due to the critical nature of the project.

Experimenting in new markets to identify potential favorable businesses should be taken into consideration. Finally, cash flows are estimated in most projects so a consideration has to be made for the quality of estimation. Therein lies one of the critical issues in capital budgeting; that there is a margin of error in the calculation of cash flows, whereas in the example above, the margin of error (typically larger with uncertain outcomes) could mean there would be a positive NPV for that critical project.

Typically, NPV is the foremost choice for determining the investing worthiness of a specific project; NPV, determined by the sum of discounted cash flows compared against the cost of the investment. NPV allows anyone to see how much value above the initial investment. MIRR, would be the next best choice, as it is measures profitability of a project as a percentage (IRR does this as well). The reason MIRR is of higher significance is it has the extra part of assuming cash flows being reinvested at the WACC rate; additionally MIRR eliminates the problem of IRR having two potential rates.

We ranked each project by the various methods stated above. Below, in Exhibit 1, are the metrics ranked by highest amount or percentage, except for payback and discounted payback periods which are ranked from low to high, signifying the shortest amount of time that the initial investment is recovered.

The answer to determine which project is best to invest in is dependent on the variables and requirements that management deems necessary, meaning the qualitative content that is supplementary to the cash flow data. Typically, firms will decide to invest on the project that produces the highest NPV, and for this case if we are to rank by NPV, project #3 is the clear winner. Ranking by profitability index gives the same answer for each project number (it is indirectly related to NPV through the sum of discounted cash flow benefits). However when we look at the other values for project #3, it is lower down the order. This is a result of the only cash flow being in the last (15th) year; due to the time value of money, this lowers the IRR and MIRR substantially, and obviously the payback period is the longest of all the projects.

The next prosperous project based off of NPV but also ranked 2nd highest for IRR, MIRR, and PI, is project #4. At first glance, when considering the two mutually exclusive projects: project #7 and #8, the NPV and PI for project #8 is higher, while the IRR and MIRR are higher for project #7. Additionally the payback and discounted payback periods are shorter for project #7. This presents a dilemma in which it appears project #8 should be selected, yet #7 seems to be more favorable overall. There is a continuity of this dilemma as the cash flow streams are unequal for each project. To solve for this issue, we used a replacement chain analysis to determine which project between the two is the best investment decision. Below, in Exhibit 2, is an analysis of each project using replacement chaining.

There are always numerous ways to see a problem and decide how to react. The investor could choose any of the above mentioned methods (NPV, IRR, MIRR, payback, discounted payback, or Probability Index) to choose an investment project. Due to the mutual exclusivity of projects #7 and #8, the investor can choose whatever criteria method deemed most significant. Other factors for consideration include the project’s proposing manager’s track record for success, the proposing manager’s confidence in the project, the timing of the project’s cash flows, the project’s ability to protect market share, or the proposing division’s track record of success.

Based on these options, and the previously detailed analysis, we recommend that the project be selected based on the NPV ranking shown in Exhibit 1. With mutually exclusive projects, conflicts may arise in choosing between using the NPV, IRR, and MIRR. In this case, the NPV is the best choice for selection because it chooses the project that maximizes value for the firm. If managers are interested in the expected rate of return on the project, the MIRR or IRR will be more likely to demonstrate the rates that are actually earned if the project’s cash flows are reinvested in future projects, but this should be supplemental to the NPV during the decision process. 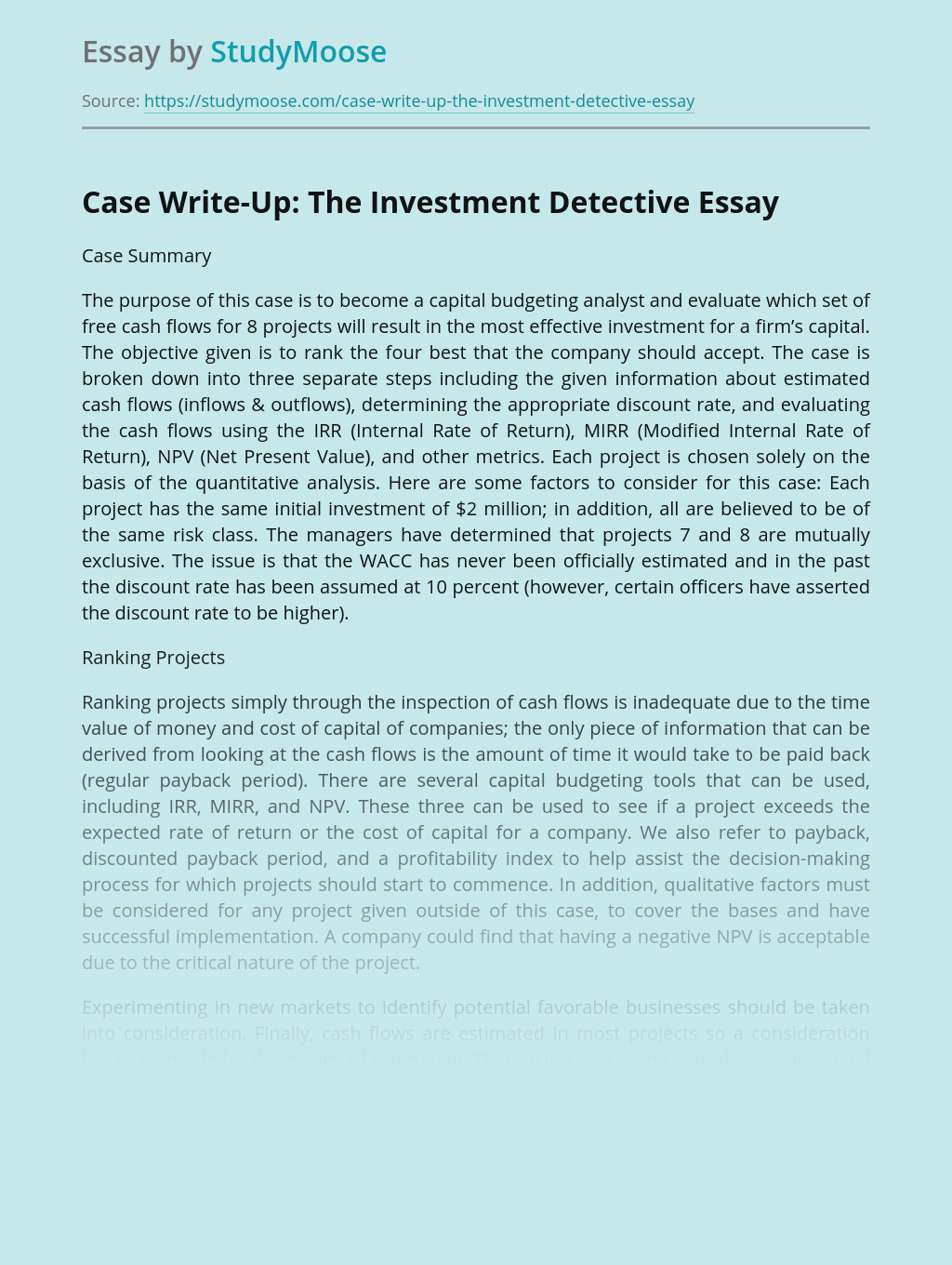 Turn in your highest-quality paper
Get a qualified writer to help you with
“ The Investment Detective Ranking Company’s Projects ”
Get high-quality paper
Helping students since 2015
Stay Safe, Stay Original