The Strange Case of Dr Jekyll and Mr Hyde is a Horror story written by Robert Louis Stevenson. The novella explores the divided nature of human personality and Victorian society by telling the story of a respectable gentleman named Dr Jekyll, who devolves into a beast by the name of Mr Hyde.

Don't use plagiarized sources. Get your custom essay on
“ Victorian Society in The Strange Case of Dr Jekyll and Mr Hyde ”
Get custom paper
NEW! smart matching with writer

For instance, Gabriel Utterson has a very “rough countenance” and looks quite ugly but he is a very nice, respectable gentleman of the novella and he is also a lawyer that helps “down-going men”. Also, Dr Jekyll, one of the main characters of the book, is very different from what he appeared to be. He becomes the most hideous character of the novella, Mr Hyde.

The first time we encounter Mr Hyde, is during Enfield’s terrible sight of a little girl being trampled over.

Stevenson conveys how dark the streets are by focusing on the ‘lamps’ which can be seen on’street after street’. Stevenson also draws our attention to the emptiness of the streets, emphasising this by using the simile “all as empty as a church”. Stevenson builds up a sense of mounting fear by adding that Enfield is so frightened that he “listens and listens and begins to long for the sight of a policeman”.

Stevenson uses the character of Mr Hyde because he is everything a monster is. He is the definition of a monster and his appearance is very easy to picture. Mr Hyde is often described using animal imagery. An example of this is when Mr Enfield witnesses first hand a terrible sight of a little girl being trampled over, “for the man calmly trampled over the girl’s body. Elsewhere, in the novella, he is compared to a ‘hissing snake’, a ‘snarling dog’ and an ‘athletic monkey’ and this reinforces the idea that he is some way sub-human. It is also significant that Hyde is only ever seen in the shadow, darkness or fog because he represents the hidden and mysterious side of man’s personality.

Stevenson uses language in a way that reveals to us the characters insincerity or sincerity by the way they speak. In the novella, there are many different characters which use their language in different ways. For example, Dr Jekyll speaks in a very indirect, reserved and cagey way of speech. He proves this in chapter three, when he become quite angry and tries to dissuade Utterson from pursuing the topic of his will, “You do not understand my position”, and this shows that he is reserved and unwilling to express his emotions. Utterson is also reserved and indirect. However Mr Hyde speaks with short simple and direct words like “What do you want”, this shows that he is very straight-forward, direct and emotional because he is not afraid to show his emotions or tell people what he thinks.

Mr Hyde does speak quite aggressively also, which reveals that he is open minded and doesn’t think properly before speaking. He is honest and straight to the point because he doesn’t mind to tell people his thoughts. In a strange way, then, the villain of the story is more honest than its hypocritical hero. Poole is the lower-classed disreputable character in the novella as he is Dr Jekyll’s butler. His use of language shows that he is willing to express his emotions. For example, he also uses short direct way of speech. Through the use of different types of speech, Stevenson seems to suggest that the more respectable and self-restrained the person the more insincere and emotionally dishonest they are.

In his exploration of the divided personality, Stevenson draws our attention to the divided nature of London in the 1880’s. Throughout the novella, we are aware of the fact that the main “respectable” characters such as Utterson, Enfield, Lanyon and Jekyll all live in and around Cavendish Square. They live in “that citadel of medicine”, in “ancient, handsome houses”, which have “a great air of wealth and comfort”. However, we learn that the shadowy character, Edward Hyde, lives in the less respectable part of London, Soho. We also learn that he lives on a “dingy street” in villainous, “blackguardly Surroundings”.

Stevenson, then, by connecting Cavendish Square with Soho, connects the rich characters in the book to the poor ones. Towards the end of the Nineteenth century, Soho was one of the least respectable areas of London. Soho was the kind of area where you would find crowded, shabby streets, people of all different nationalities, cheap eating houses, music halls, brothels or criminals making crooked deals. By connecting these two areas, Stevenson seems to be saying that the two are actually inseparable, that the rich cannot exist without the poor, that Jekyll cannot exist without Hyde.

Victorian society was highly moralistic and encouraged respectable gentleman to keep their private lives carefully hidden away. Stevenson makes this point by including numerous symbols of privacy and secrecy throughout the novella.

For instance, Dr Jekyll’s laboratory is at the back of his houses “which showed no window”. This suggests that Dr Jekyll does not want people to know what he does in his own time because the simple reason that Victorian society was too highly moralistic. This kind of secrecy carries on through the novella with other characters as well. For example, Mr Utterson receives a package from Dr Lanyon which he examined in his office. Before opening the package he locks the door of his own office which shows that Utterson is very secretive about his business and does not want to be associated with down going men. The package was then put in a safe so that no one could have seen it. Taken as a whole, these symbols of secrecy reinforce the idea that Victorian gentlemen were compelled to keep their private lives hidden away.

I think that the themes of the novel are not relevant now because the society is not so strict and people don’t have to cover up their different types of living or their utmost desires.

Victorian Society in The Strange Case of Dr Jekyll and Mr Hyde. (2017, Nov 04). Retrieved from http://studymoose.com/victorian-society-in-the-strange-case-of-dr-jekyll-and-mr-hyde-essay 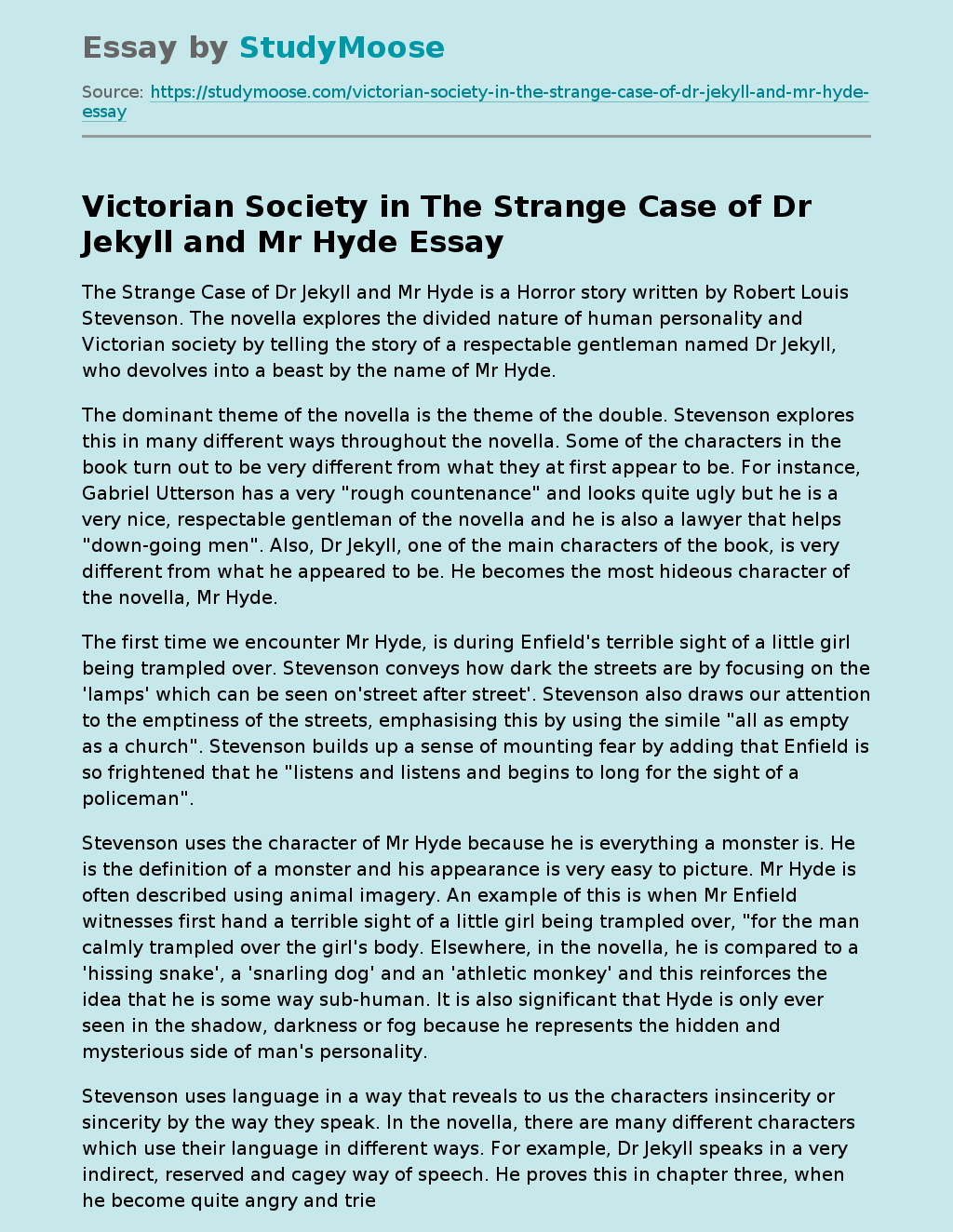