” In each of us, two natures are at war- the good and the evil. All our lives the fight goes on between them one must conquer. But in our own hands lies the power to choose- What we want most to be we are” (Robert Louis Stevenson. Dr Jekyll and Mr Hyde 1885)

Born in 1850 into a middle class family in Edinburgh, Robert Louis Stevenson’s Father expected his son to follow in the family tradition and become an engineer.

Stevenson, however had other ideas. He was fascinated by literature, but to please his family he studied law, yet he never practised as a lawyer fulfilling his ambition to become a writer.

Dr Jekyll and Mr Hyde was a product of Robert Louis Stevenson life. Stevenson’s childhood was blighted by illness and as a result he spent much of his time at home under the care of his much loved nurse Alison Cunningham who told him stories of ghosts, body snatchers and heaven and hell.

Stevenson as a result became fascinated by the idea of good and evil in every person. Stevenson’s ill health continued for most of his life and as a result he took laudanum and morphine as well as cocaine for chest problems and depression, other factors which may well have affected his life style and his writing.

The Stevenson’s family home was in Edinburgh, but as he grew he travelled more and further, London, Bournemouth, France and the continent. Stevenson’s choice of London as the setting for Jekyll and Hyde was the result of the extreme social divide he witnessed there, the wealth and poverty been vividly displayed.

The wealthy affluent London being safe like the character of Dr Jekyll whilst areas of social deprivation were constantly under treat of crime evil and disease, evil being Dr Jekyll’s alter ego Mr Hyde

This essay will discuss how the Victorians viewed their rapidly expanding cities. It will also explore how Stephenson uses contrasting scenes and weather descriptions to portray good and evil.

As a result of the industrial revolution Victorian Britain saw a massive movement of people from the countryside to major cities. Hugh numbers of houses were built to accommodate these people, but towns quickly became over crowded and unhealthy places. Filthy conditions and the spread of disease was rive amongst the poor and working classes. There was high unemployment and no suffrage for the poor, as a result the middle classes felt a revolution was imminent and felt fearful.

Robert Louis Stevenson illustrates a divided city in Mr Utterson and Mr Enfields Sunday walk through the streets of London. They travel through a small quite street, it is described using metaphors “like a fire in the forest” indicating this street is well kept, a sharp contrast to others in the area, the shutters are described as freshly painted, the brasses well-polished and generally clean. This indicates that the inhabitants here are doing well. And yet at the corner of the same street stands a two story building.

The building has only a door on the lower storey, the lack of windows indicating this building has something to hide. It is described as baring the features and marks of prolonged neglect. Stevenson uses the words sinister and sordid to describe this building. The fact that a building of such neglect stands on the same street as the affluent properties gives the reader the sense that everything is not going to be as it first appears in this novel. Stevenson uses this description of a affluence street with the uncharacteristic building an unlikely feature of this street, to prepare the reader for the dual character of Dr Jeklyl on the surface a good respectable person, who is able to turn into a alter ego the evil cruel Mr Hyde.

Weather descriptions are used by Stevenson in The Carew Murder Case to depict the depraved nature of Mr Hydes character. The maid in the opening paragraph witnesses the murder of Carew. Stevenson uses graphic detail in his description of the weather on this night to create the atmosphere and set the scene.

The association between lightness and goodness is clear; the night is described as been cloudless and lit by a full moon. The moon light on Carews face allows the maid to see his face, which she describes as pleasing to watch, a face breathing innocence and old world kindness. His beauty and innocence giving the impression of goodness. This description of Carew makes his fate all the more shocking and sets the scene for the dramatic moment when the maid witnesses the violent murder of Carew by Mr Hyde. Hyde is described by the maid as the complete opposite to Carew, a man she had previously conceived to dislike having an animalistic appearance.

Stevenson continues to use weather descriptions to create a sense of foreboding as Mr Utterson travels through the streets of London to the home of Mr Hyde. Though it is nine in the morning the weather is described as foggy ‘like a great chocolate coloured pall lowered over heaven’ and ‘dark like the back end of morning’, the use of fog and darkness implies a veil to hide and conceal evil. He continues saying that the fog is broken up yet for a moment giving ‘a haggard shaft of day light’ this being only a brief relieve from the ‘mournful reinvasion of darkness’, reinforcing the idea of evil doings and the sorrow associated with this. By using weather descriptions in this way the city of London clearly becomes a dramatic backdrop for Hydes crimes.

Victorian society was stricictly religious and therefore encouraged people to hide their sins and repress their desires. In this novel Stevenson offered Victorian society not only a psychological horror but a recognision that there is evil inside all of us, not perhaps to the extremes of Jekyll and Hyde but there is a side we hide, a suggestion that we all have a dual personality!

Stevenson uses symbolism to create powerful images, for example doors are tradionally powerful and mysterious symbols they represent public and private spheres, things hidden and reveales. Stevenson refers to doors five times in the opening chapter of this novel. What is also relevant is that the Victorians had a “front door /back door” rule: the front door represented repectability so only those considered important and of high social status entered though the front door. The back door was used for those considered socially inferior, like servants. Stevenson uses this rule to emphasise Hydes’s social inferiority as he is not admitted through the front door of Jekylls home. What is significant here is that although the reader knows Jekyll and Hydeare one and the same, when Jekyll becomes the depraved Hyde he is evil and socially inferior, a lesson in immorility? 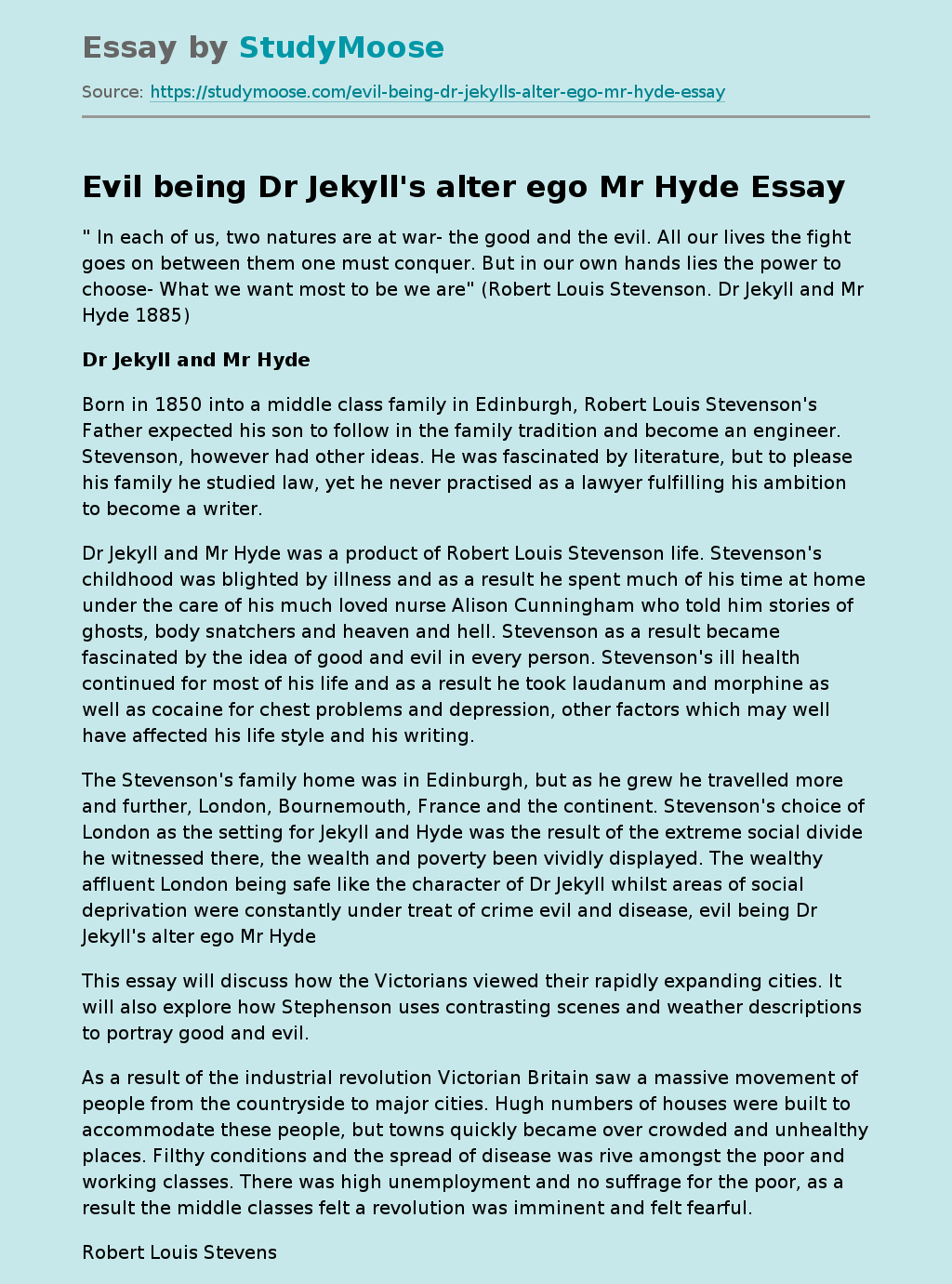