Good and Evil in Jekyll and Hyde Character

The strange case of Dr. Jekyll and Mr Hyde is a tale of contrast between good and evil. Robert Louis Stevensons novel demonstrates the adverse effects of scientific experiments and how the perception of doors can lead to evil. Furthermore “Jekyll and Hyde” is full of dual personality which in itself creates god and evil. Also it suggests that good cannot exist without evil.

Firstly many of the rich and respected went out at night to experience how the other half lived.

Don't use plagiarized sources. Get your custom essay on
“ Good and Evil in Jekyll and Hyde Character ”
Get custom paper
NEW! smart matching with writer

Here among the dim lit alleyways of the East End and under the protection of darkness did the upper class come out to play. They were frequently involved in illicit activities such as gambling, prostitution, brawling, heavy drinking and opium taking. They wanted to break away from the restraining shackles of society and enjoy the thrill of a concealed life at night away from the tight morals that governed the upper class. It was therefore no surprise that Enfield also led a secretive concealed life at night.

‘Coming home from some place at the end of the world, about three o’clock of a black winter morning’.

‘Some place at the end’ suggests that Enfield is letting on too Mr Utterson that he was taking part in the extreme pleasures the city had to offer. However he was not going to openly admit as the effect on his reputation would be damming and the respect of Utterson would be lost as this secret life was a secret that could not be disgusted even to fellow aristocrats.

‘Extreme’ being that it is commented on as being the end of the world. Furthermore ‘black winter morning’ is using pathetic facility to show us that Mr Hyde is about as the author portrays the weather to be Mr Hydes appearance.

Even though these illicit wanderings may be considered to some as being evil, the person who is partaking in the activities should be may be considered as good as he is not lying but also saving disgrace and disrespect from all other lawyers. The secret, shaded society knew full well that if they were discovered their well respected position and occupation would collapse from underneath them. This was even more so for lawyer as they earned a living from devils advocate therefore due to the strong religious beliefs in the 1870s people already hated lawyers as they do today due tot heir association with the devil. This shows that good cannot live without evil, as if their was no evil how could there be good.

Secondly Stevenson presents good and evil through the perception of doors. Mr Hyde’s door is described as being ‘blistered and disdained’. The author presents the door as a personified form of Mr Hyde, ‘Blistered’ can mean burnt; burnt is disfigured; disfigured is mutated. Mr Hyde has been created through the mutation of Dr Jekyll’s ego. The author does this because the door is the entrance to Mr Hydes beginning and other egos’ life. Also the word ‘disdained’ means rejected and as Mr Hyde appears to be lonely due to him never mentioned as being civilized or having friends he could be described as being rejected.

Therefore the door is shown as a personified form of Mr Hyde’s mind and body due to the door being rejected and mutated. Finally due to the door being the beginning of the creatures life if this door did not exist good could have been destroyed and at the same time evil destroy itself aswell. Another example of good not being able out live without evil is the street in which the door of Hyde’s house resides, ‘the street shone out in contrast’ supports Stevensons theory of good being unable to exist without evil. As the street ‘shone’ which is usually associated with happiness, and happiness is one of the many emotions of good. Therefore this street was good yet to support the authors theory he had to include evil some how and so decided to put the entrance to pure evils residence.

Thirdly Stevenson portrays Mr Hyde as a sinister, violent, evil man. ‘Trampled calmly over the child’s body’ suggests to us the reader that this man is evil as why does he just trample over a child’s’ body. The adverb ‘calmly’ implies that his moves were not premeditated but fluid as if his actions came naturally to him, almost as if he walks over children regularly. Whereas the word ‘trampled’ implies that Mr Hyde is not all there, as if he is intoxicated with drug usage or excessive alcohol consumption.

Also trampling may suggest that a state of panic has arisen in Mr Hyde’s mind to get home without being recognized or arrested due to his mutation of Jekyll. Furthermore Mr Hyde is described as being indescribable ‘he gave an impression of deformity without any namable malformation’ suggests that Mr Hyde possesses an aura of evil but shows know deformation from normal human form. This implies that no one knows how to describe Mr Hyde yet he is not deformed therefore suggesting his pure evil. No one has ever seen pure evil they have only felt or seen examples of what it can do also evil has never taken human form before.

Whereas Dr. Jekyll is described as, ‘a well-made, smooth-faced man of fifty… with every mark of capacity and kindness’. The word ‘kindness’ suggests that he was a generous, good man. Furthermore from these two examples you can see that Stevenson implies that Hyde represents evil and Jekyll represents good through the novel. In addition the Victorians believed in physiognomy which was where they thought that the way you looked linked with your personality. This relates to what I have already mentioned about the appearances of Jekyll and Hyde- Hyde being evil as he was ugly and Jekyll being good as he was an attractive man. In the Victorian times everyone would have believed this as they were all very superstitious due to there being no scientific proof to argue against some of the misguided teachings of the church.

Fourthly Stevenson presents good and evil through referring to the teachings of the bible due to the fight of good and evil, and duty and temptation in the human soul: a story as old as genesis. Jekyll says that ‘the terms of this debate are as old and common place as man’. ‘This debate’ refers to the eternal struggle of all forms of good and evil.

‘Common place’ suggests that us the reader has grown accustom to evil always accompanying good. Furthermore ‘as old…as man’ is referring to the struggle of good and evil which Adam and Eve encountered with the temptation to eat the fruit off the forbidden tree. Due to this Stevenson created a philosophical theory that without human interference there would be no emotion as only good would exist and as Stevenson has demonstrated throughout the novel good cant exist without evil. This is therefore suggesting that mankind is the evil in the world which is why Stevenson portrays Hyde as being ‘Ape like’ suggesting that if mankind had not evolved from apes the evolution of evil would not have happened,

Fifthly Stevenson portrays good and evil through evolution. Jekyll is shown as conceiving Hyde as his ‘lower element” Hyde is actually perceived as being lower on the evolution scale by the author. Utterson found Hyde both ‘dwarfish’ and ‘troglodytic’. ‘Dwarfish’ and ‘troglodytic’ are both associated with cave dwellers and through the course of evolution we have lived in caves however that was some ten thousand years ago thus suggesting of his un-evolved nature. Whilst other remarks describe Hyde as being ‘ape-like’ it is with no doubt then that Hyde is suppose to not have evolved fully therefore suggesting that Hyde is immortal. Therefore if Hyde is shown as being immortal then the author is implying that evil is indestructible whilst good exists.

Finally Stevenson presents good and evil through the use of pathetic facility in the weather. When Hyde is around Stevenson uses “at night under the face of the fogged city moon” to increase the tension of Hydes appearance. The word ‘fogged’ suggests that it’s misty and eerie. Eerie usually been associated with spookiness/horror so therefore the presence of horror is created by the appearance of Hyde. This type of weather is a pun on Hyde’s name due to you being able to ‘hide in fog’. Alternatively the weather seems to be nice and pleasant when Jekyll’s around. “It was a fine, dry night… the lamps unshaken by the wind”. The word ‘unshaken’ may suggest how calm the weather is, comparing to Jekyll as he is also a ‘calm’, ‘gentle’ person.

However towards the end of the novel anti-pathetic facility occurs as the weather is good yet Hyde appears. ‘I sat in the sun… I was once more Edward Hyde ‘. Moreover you would think this would occur all through the novel, however near the end anti-pathetic fallacy is used as when Jekyll is around the weather is also bad. This may reflect on the personalities as Jekyll is starting to be overcome by the evil of Hyde and so in turn is becoming evil. This makes the reader confused and not sure what to think with this unexpected change however that is how Stevenson has presented some of the different forms of good and evil throughout the novel.

In conclusion Robert Louis Stevenson presents good and evil as being partners, partners that should never be separated over wise the effects could be disastrous. Therefore Stevenson has shown us the reader that evil must co-exist if not to cause self-destruction. Furthermore he presented Jekyll as being addicted to Hydes evil and the more he tried to fight his addiction to further he sank into its horrific power. Also Stevenson shows us that for the world to survive good has to be forever locked in conflict. However Stevenson also presents good and evil through the perception of doors and how the shackles of society which many people crave are so easy to come by as to loose. We have grown up to believe that good always triumphs over evil yet if that is so eventually one day nature will conquer over man kind, as Stevenson proves that mankind is the route of all evil and therefore it is us that has to co-exist with nature.

Good and Evil in Jekyll and Hyde Character. (2017, Nov 02). Retrieved from https://studymoose.com/good-and-evil-in-jekyll-and-hyde-character-essay 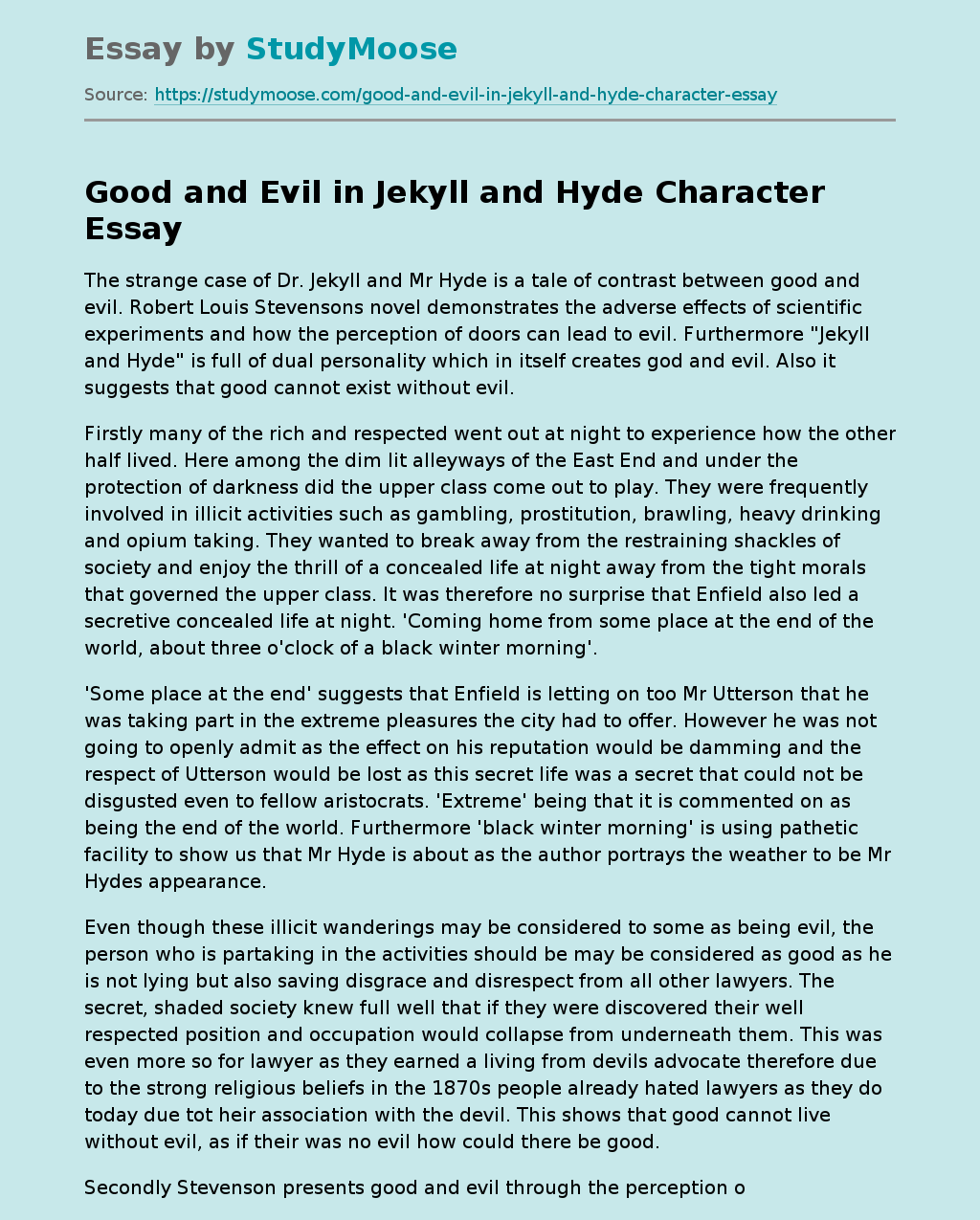