Juan Luna y Novicio (October 23, 1857 – December 7, 1899) was a Filipino painter, sculptor and a political activist of the Philippine Revolution during the late 19th century. He became one of the first recognized Philippine artists. His winning the gold medal in the 1884 Madrid Exposition of Fine Arts, along with the silver win of fellow Filipino painter Félix Resurrección Hidalgo, prompted a celebration which was a major highlight in the memoirs of members of the Propaganda Movement, with the fellow Ilustrados toasting to the two painters’ good health and to the brotherhood between Spain and the Philippines.

Turn in your highest-quality paper
Get a qualified writer to help you with
“ Juan Luna y Novicio ”
Get high-quality paper
NEW! AI matching with writer

Regarded for work done in the manner of the Spanish, Italian and French academies of his time, Luna painted literary and historical scenes, some with an underscore of political commentary. His allegorical works were inspired with classical balance, and often showed figures in theatrical poses. Born in the town of Badoc, Ilocos Norte in the northern Philippines, Juan Luna was the third among the seven children of Don Joaquin Luna de San Pedro y Posadas and Doña Laureana Novicio y Ancheta.

In 1861, the Luna family moved to Manila and he went to Ateneo Municipal de Manila where he obtained hisBachelor of Arts degree. He excelled in painting and drawing, and was influenced by his brother, Manuel Luna, who, according to Filipino patriot José Rizal, was a better painter than Juan himself. Luna enrolled at Escuela Nautica de Manila (now Philippine Merchant Marine Academy) and became a sailor.

He also enrolled in the Academy of Fine Arts (Academia de Dibujo y Pintura) in Manila where he was influenced and
taught how to draw by the Spanish artist Agustin Saez. Unfortunately, Luna’s vigorous brush strokes displeased his teacher and Luna was discharged from the Academy. However, Guerrero was impressed by his skill and urged Luna to travel to Spain to further pursue his studies. In 1877 Manuel and Juan Luna traveled to Europe, where Manuel studied music and Juan painting. Juan entered the Escuela de Bellas Artes de San Fernando, where he befriended the painter Don Alejo Vera. Luna was discontented with the style of teaching in school and decided that it would be much better to work with Vera. Vera brought him to Rome for some of his commissions, and Luna was exposed to the art of the Renaissance painters. It was in 1878 when his artistic talents was established with the opening of the first art exposition in Madrid which was called the Exposición Nacional de Bellas Artes (National Demonstration of Fine Arts). From then on, Luna became engrossed in painting and produced a collection of paintings that he exhibited in the 1881 Exposition. In 1881, his La Muerte de Cleopatra (The Death of Cleopatra)[1][2] won him a silver medal and came in second place. Luna’s growing reputation as an artist led to a pensionado (pension) scholarship at 600 pesos annually through the Ayuntamiento of Manila. The condition was that he was obliged to develop a painting which captured the essence of Philippine history which would then become the Ayuntamiento’s property. On December 8, 1886, Luna married Maria de la Paz Pardo de Tavera, a sister of his friend Felix and Trinidad Pardo de Tavera. The couple traveled to Venice and Rome and settled in Paris.

They had one son, whom they named Andrés, and a daughter nicknamed Bibi who died in infancy. Luna was fond of painting his wife. However, the jealous Luna frequently accused Paz of having an affair with a certain Monsieur Dussaq. Finally in a fit of jealousy, he killed his wife and mother-in-law and wounded his brother-in-law, Felix, on September 23, 1892. He was arrested and murder charges were filed against him. Luna was acquitted of charges on February 8, 1893, on grounds of temporary insanity; the “unwritten law” at the time forgave men for killing unfaithful wives.[5]He was ordered to pay the Pardo de Taveras a sum of one thousand six hundred fifty one francs and eighty three cents, and an additional twenty five francs for postage, in addition to the interest of damages. Five days later, Luna went to Madrid with his brother, Antonio Luna, and his son, Andrés. In 1891 Luna moved back to the Philippines and traveled to Japan in 1896, returning during the
Philippine Revolution of the Cry of Balintawak. Unfortunately, on September 16, 1896, he and his brother Antonio Luna were arrested by Spanishauthorities for being involved with the Katipunan rebel army.[6] Despite his imprisonment, Luna was still able to produce a work of art which he gave to a visiting priest. He was pardoned by the Spanish courts on May 27, 1897 and was released from prison and he traveled back to Spain. In 1898, he was appointed by the executive board of the Philippine revolutionary government as a member of the Paris delegation which was working for the diplomatic recognition of the República Filipina (Philippine Republic). In 1899, upon the signing of the Treaty of Paris (1898),[7] Luna was named a member of the delegation to Washington, D.C. to press for the recognition of the Philippine government.

He traveled back to the Philippines in December 1899 upon hearing of the murder of his brother Antonio by the Kawit Battalion in Cabanatuan. On December 7, 1899, Luna suffered a heart attackand died there. His remains were buried in Hong Kong and in 1920 were exhumed and kept in Andrés Luna’s house, to be later transferred to a niche at the Crypt of the San Agustin Church in the Philippines. Five years later, Juan would be reinstated as a world renowned artist and Peuple et Rois, his last major work, was acclaimed the best entry to the Saint Louis World’s Fair in the United States.[8] Unfortunately some of his paintings were destroyed by fire in World War II. 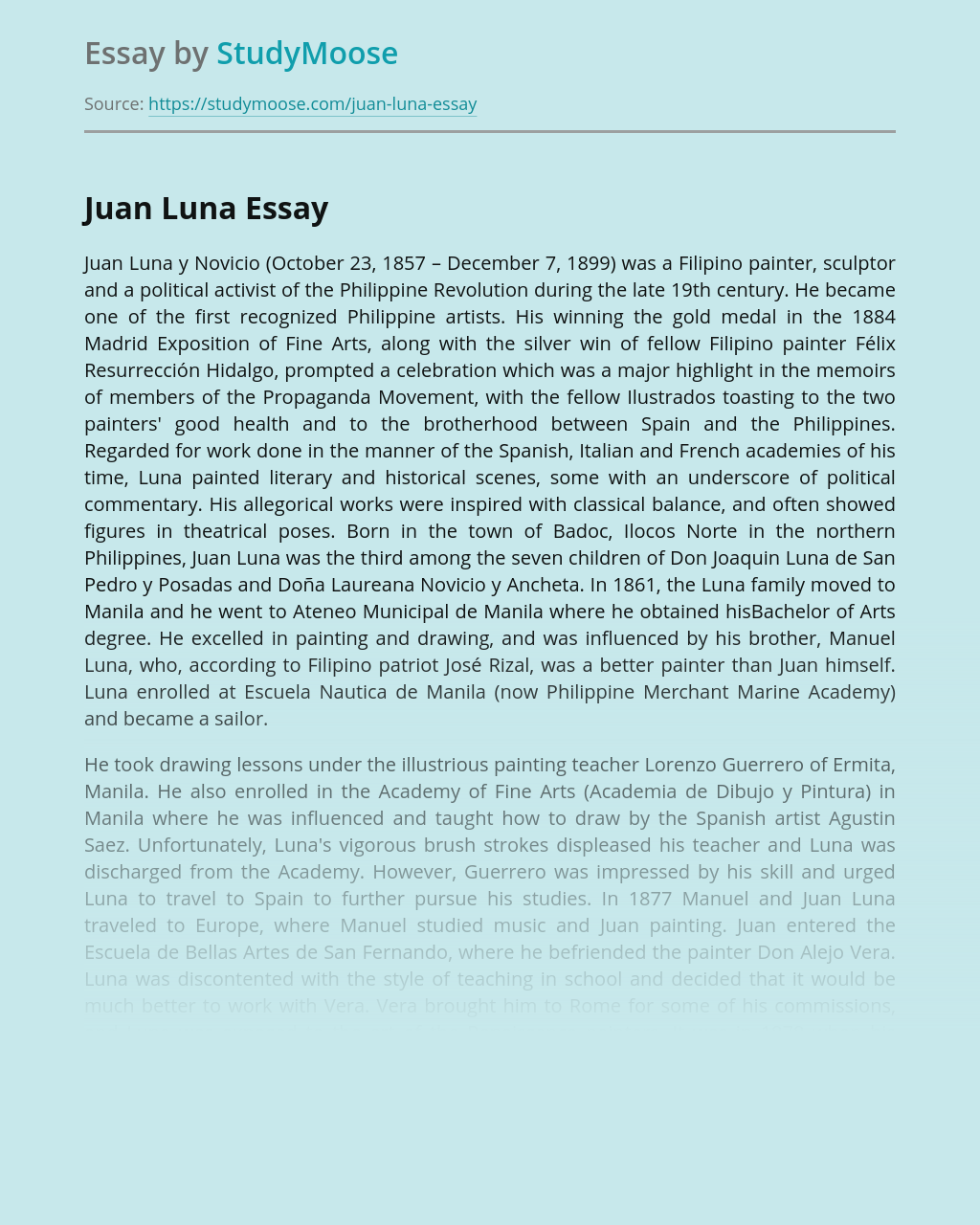 Turn in your highest-quality paper
Get a qualified writer to help you with
“ Juan Luna y Novicio ”
Get high-quality paper
Helping students since 2015
Stay Safe, Stay Original