The first thing you’ll notice about the painting is its size. Standing at 4 meters in height and 7 meters in width, the painting no doubt commands attention and gives off a majestic aura. Any viewer of the painting will feel dwarfed by the large painting and may feel overwhelmed by the magnanimity of it. The next thing you’ll notice about the Spoliarium is the rich colors used. Predominantly, the painter made use of warm colors for his work of art, with reds being a central color that attracts the most attention.

Don't use plagiarized sources. Get your custom essay on
“ Juan Luna and Filipinos Great Pride ”
Get custom paper
NEW! smart matching with writer

In person, the colors are striking and quite unique. The Spoliarium depicts an even during the Roman empire, where gladiators die for entertainment. The painting shows how gladiators are being dragged mercilessly by men towards an unknown darkness, where other tragically killed gladiators are brought.

To the left is a cheering crowd, screaming for blood while to the right, a woman is crouched and seemingly in sorrow. The painting shows a tragic event, definitely.

But it also shows a deeper meaning, especially for the Filipinos during the time of the Spanish colonization (which lasted over 400 years!). According to art experts, the fallen gladiators who are being dragged are the Filipino people, while the men dragging them into the darkness are representative of the Spanish rule. The woman crouched on the right side of the painting is believed to be the Mother Country or the Inang Bayan who weeps for her Philippines. The blood thirsty crowd to the left is a representation of the social cancer of that time.

Truly, there is more than meets the eye when it comes to Luna’s painting. The Spoliarium shows the Spanish government’s mistreatment of the Philippines. The dead bodies of the gladiators represent the Spanish killings of Filipino revolutionaries.

The Spoliarium is famous among the Filipino people, to say the least. The fact that Luna had gained recognition among other Spaniards in Madrid because of this painting has given the Filipinos great pride. This also shows that the Filipinos have skills that can equal, if not, surpass the Europeans of that time. This is why the painting, along with Hidalgo’s, are deemed National Cultural Treasures, because they were able to contribute to the development of art in the Philippines. The Spoliarium can be found in the Hall of the Masters of The National Museum of the Philippines. Whether you are a foreigner or a local, take a few hours off your schedule to visit the museum and learn more about Philippine culture and history through the eyes of its artists. It is an educational and enriching experience. 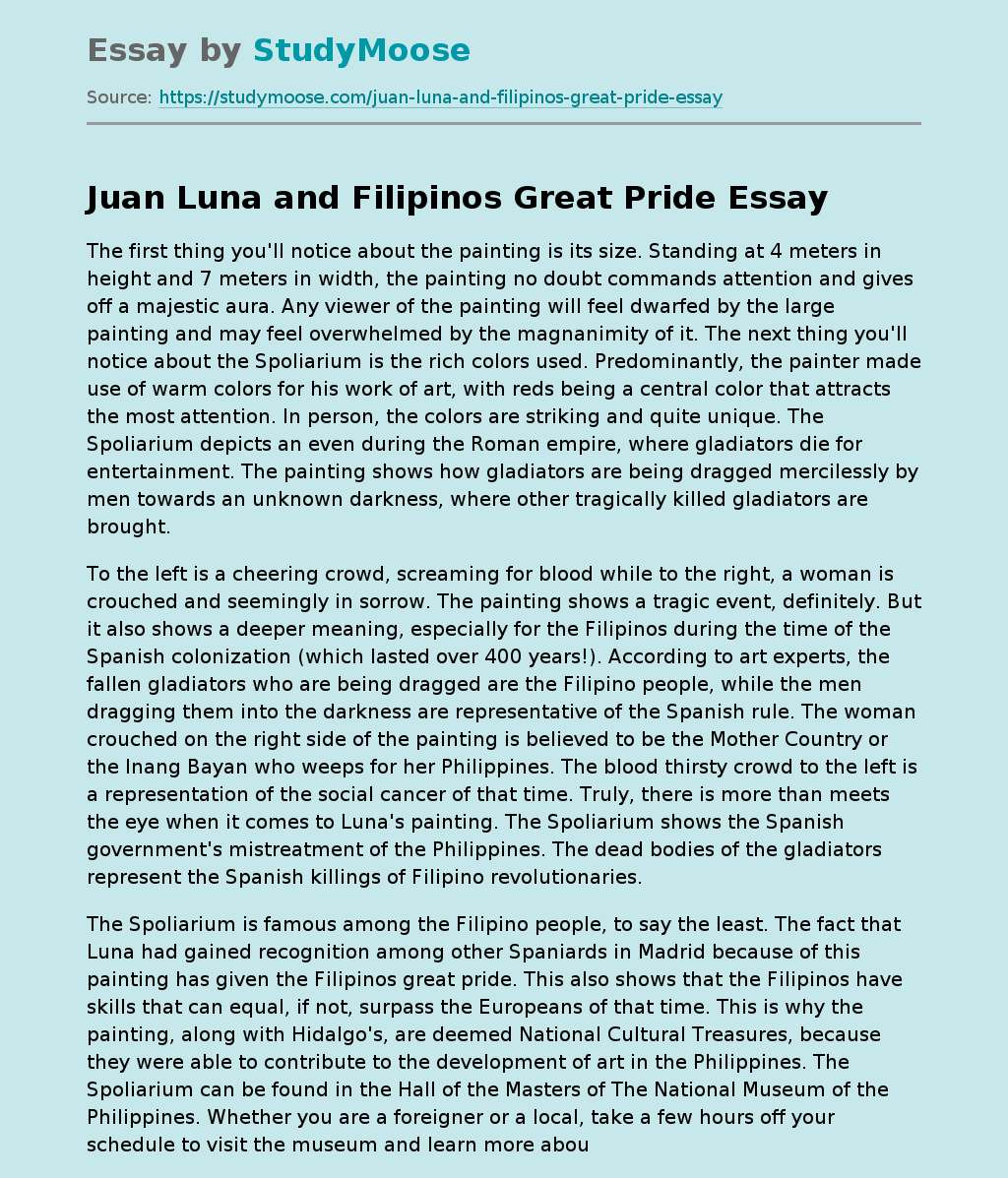