Reaction Paper on the film “Ganito Kami Noon, Paano Kayo Ngayon?” by Eddie Romero Ganito Kami Noon, Paano Kayo Ngayon is a 1976 film directed by Eddie Romero starring Christopher de Leon and former Miss Universe Gloria Diaz. It’s easy to say “I am a Filipino”. But when can a person be considered as a true Filipino? In the movie, the word “Filipino” had different definitions. The word originally referred to a person of pure Spanish decency that was born in the country.

Don't use plagiarized sources. Get your custom essay on
“ Filipinos Then, Filipinos Now ”
Get custom paper
NEW! smart matching with writer

However, a travelling Chinese merchant (Lim) born in the country was also considered as a Filipino. Based on these facts, being born in the country is one of the major criteria in order for one to be called a “Filipino”. Nicholas Ocampo, also called Kulas, was the main protagonist in the film. He was innocently set to find a friar’s son at the peak of the Philippine revolution against the Spanish colonization. He was able to encounter people who influenced his way of thinking and his way of living during his journey.

He was able to meet different kinds of people; Filipino revolutionaries, Spanish friars, guardia civils, circus folks (where he met Diding, a girl whom he fell in love with), and Filipino elites who identified themselves as the real Filipinos. He was confused on what a Filipino truly is, on who has the right to call himself/herself as a true Filipino. He had no idea of what a Filipino is, or why he was called as one.

He asked Don Tibor, a Visayan lawyer, if he has the right to call himself a Filipino, to which the lawyer answered that in order to be a Filipino one must be a worthy and valuable person. Kulas went through a lot of ups and downs during his stay in Manila. He experienced being wealthy, being respected, being bullied, being heartbroken, and being betrayed by the people around him. Kulas, in the end, realized that it is not enough to be born in the country in ordered to be called a Filipino, that being a Filipino doesn’t only mean the physical ties a person has with the land, or with tradition, or even with his or her family.

It means recognizing ourselves as the protector of this land, and protector of our fellow men. It is being able to fight a grander cause and being able to fight for what is good for our country. The term Filipino was made because in the past, the people of the Philippines called themselves according to what region or island they came from, for example, the people from Visayas are called Visayans, people from Manila call themselves Tagalogs, Ilokanos for the people from Ilocos and many more. Since the Philippine archipelago consists of thousands of islands, it created a rift between its people because of their different identities. Because of this, the term Filipino was used to call the people of the Philippines as a whole in order to avoid conflicts among the natives and also to unify the people. According to a study conducted by J. A. Yacat of the University of the Philippines Diliman, there are three factors that are considered in order to have a Filipino identity: a sense of shared origins (pinagmulan), growing up in a similar cultural environment (kinalakhan), and a shared consciousness (kamalayan). T

he first one, pinagmulan, has something to do with being born in the country, having parents who are Filipinos, residing in the Philippines, or is a Filipino citizen. It basically implies that a person is a Filipino if he or she satisfies the definition of Filipino citizenship as stated in the 1987 constitution. The second factor, kinalakhan (cultural roots) revolves around participation and being immersed in a cultural background acknowledged as Filipino. This includes the speaking of a Philippine language, and other things that differentiates us from foreigners, like the way we see things, the way we look at things, and the way we face every situation that we encounter. The last factor, “kamalayan” (consciousness), is associated with awareness of the self as a Filipino, acceptance of membership in the category “Filipino”, and also pride in this membership. The American colonization was helpful in the making of the Filipino identity because of the way they treated us in the past, our ancestors thought of a way to distinguish ourselves and put the Filipinos on a classification different than the wicked colonizers.

The revolution also helped in shaping the Filipino identity. The revolution unified the people. Without the revolution, we would still be under the hands of the colonizers without having an identity of our own. Though the colonization and Filipino revolution helped in the creation of the Filipino identity, each also brought negative impacts that hindered the Filipinos to create an identity of their own. Because of the booming economy of the United States, there is a noticeably big difference on the physical appearance of the Americans from the Filipinos. This is where the colonial mentality of the Filipinos heightened. Those who had money or were in the upper class of the society tried hard to dress and act like Americans in order to blend with the colonizers and also to flaunt their newly bought things and their fluency in speaking the American language. Because of this, they believed that they belonged with the Americans, that they are Americans and not Filipinos. In the title, Ganito kami noon , paano kayo ngayon:?, there is a question that needs to be answered.

Paano kayo ngayon? What is the state of the Filipinos now? To answer that question, many of the Filipino’s ideas and interests have changed. Technology rises and new trends have been made. Sometimes, the Filipinos now tend to forget what is important and what is significant. Filipinos then were able to think rationally. Filipinos nowadays are simply going with the flow. They go to where they will surely benefit, or to where they can gain much, much more. The sense of Filipino nationalism is in the end forgotten. People patronize more the products that came from other countries rather than the products that were made here in the country. Though Filipinos in the past did the same things, the intensity in this modern era is a lot greater than in the past. Our country is getting more and more liberated. Because of the many colonizers after the Americans, several foreign influences have been adapted as our own. The Filipino culture have been mixed with different cultures from neighbouring countries like China, Japan, Korea, and others because of intermarriages.

The way the government runs the country is becoming worse. The Philippines is now buried in debt. Filipinos nowadays are becoming harder to understand. One runs for election not because he or she wants to serve the country but because he or she wants to make more money. Also, the increasing percentage of crimes involving youth offenders is very alarming. We always ask for reasons why these crimes happened. Maybe because Filipino youth then have good moral attitude than Filipino youth now. The use of “po” and “opo” have always been a part of our Filipino culture. We were taught to use these words as a sign of respect to the elders. But now, we rarely hear those words especially from the younger ones. Filipino youth today had become verbally aggressive and delinquent. Another example is, Filipino youth now tend to imitate some characters from different foreign films thinking that it is “cool” to be violent and aggressive.

Filipinos Then, Filipinos Now. (2016, May 24). Retrieved from http://studymoose.com/filipinos-then-filipinos-now-essay 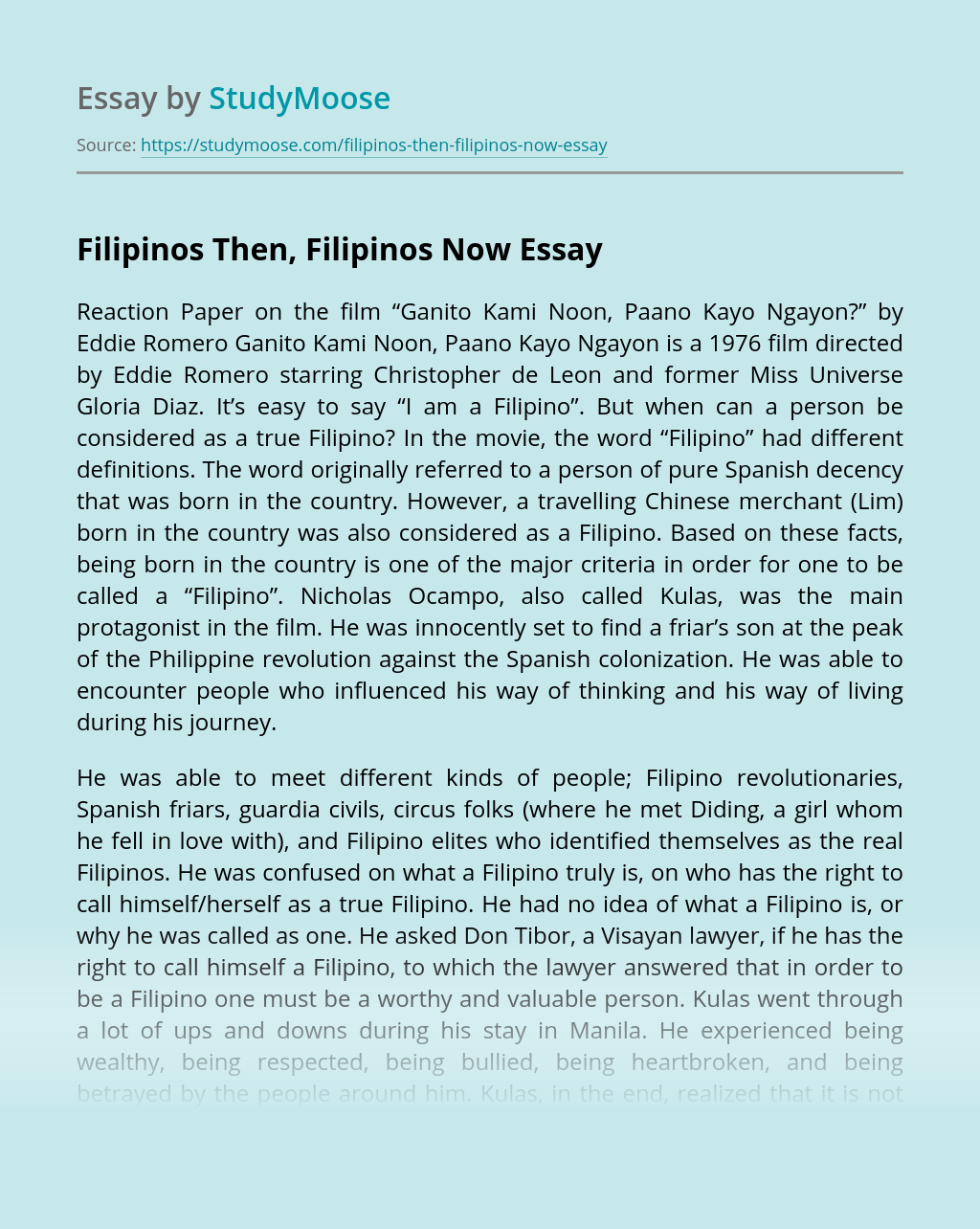