Colonization of the Americas by European countries was a significant historical event that began in the 15th century. Beginning with Portugal’s ventures into overseas exploration, the phenomenon soon infected different European nations, with Spain and Portugal divvying up the South American continent. Discoveries in the new world led to financial development in Europe. On the other hand, introduction of European ideas led to an overhaul of the Native American economy. The introduction of the Christian faith likewise impacted the natives significantly.

Arguably the most powerful impact of colonization, nevertheless, was the impact of illness, which decimated the native population. Overall, colonization of the Americas impacted Europeans and Native Americans in regards to economy, faith, and illness, eventually leading to extreme European influence and power in America.

One of the most striking results of colonization was the quantity of pure wealth produced through the nests. Through the Spanish encomienda system and the Portuguese donatario system, European countries had the ability to exploit the native population in order to produce revenue.

Large-scale farming of cash crops such as dye-wood and sugar subjugated Native Americans in addition to African slaves (obtained through the triangle trade system) in order to supply an appropriate amount of crop exports at a low cost.

According to [Document 7], the colonizers even lay claim to the land, eventually taking it from the Locals. The most striking example of European exploitation of New World resources is the silver mines at Potosi. By utilizing the nearly inexhaustible labor force supplied through the Incan mita system, the Spaniards efficiently produced a silver factory that produced almost 5 million kgs of silver between 1591 and 1610.

This in turn resulted in the increase in power of the Spanish empire by increasing its buying power and supply of wealth.

The economic impact, however, was not purely limited to European gain, and was somewhat mutual. Through the Columbian Exchange [Document 3], many items of agricultural benefit were brought to the new world by the Europeans. Through the advent of wheat, rice, oats, and sugar, food productivity increased and hunger became less prevalent. In addition, livestock (domesticated animals) such as cows, pigs, and chickens helped provide the natives with new sources of food. Not only did European goods influence American agriculture, they influenced American culture as well. European horses led to new hunting capabilities (such as those of the Plains Indians of North America). European trades of metal-smithing, writing, and agriculture spread to the Americas so that “[the] natives ha[d] successfully learned all the Spanish trades” [Document 1].

With European trades and goods came European religion. The Europeans, especially Emperor Charles V, prompted by Bartolome de las Casas, saw religious conversion of the natives as their mission. At the time of colonization, Charles V was also fighting a desperate war against Protestantism; the large amount of converts from the New World was a much desired boon to Catholicism. The natives, however, were not peacefully converted. One example of the brutal ways in which the natives were converted is the conversion of Chief Hatuey, who was offered a choice – baptism or death by burning at the stake [Document 8].

The greatest struggle for the Europeans, however, was to convert the two great American empires: the Inca and the Aztecs. Upon seeing the human sacrifices performed by the Aztecs, Hernan Cortes “taught the people [his] religion” [Document 2] through force. In addition, the conflict between Francisco Pizarro and the Incan emperor Atahualpa started after the Inca disrespected the Bible by throwing it on the ground.

The Europeans were aided in their conquest and conversion of the natives by one accidental factor – disease. Due to the geography and fauna of Eurasia, the Europeans had domesticated animals they lived with in close proximity; this in turn gave rise to a plethora of zoonotic diseases (diseases originating form animals) in Europe, Asia, and Africa. The residents of the new world, however, had never developed immunity to these diseases, having never encountered them. When the Europeans arrived, they brought diseases such as smallpox, which reduced the native population from 30 million in 1519 to 3 million in 1568 [Document 5].

The spread of disease gave Europeans an extreme advantage in terms of conquest. While the Aztecs were rendered immobile by smallpox, Hernan Cortes was able to make preparations for conquest of Tenochtitlan. Similarly, while the Inca were ravaged by a plague and a civil war, Francisco Pizarro took advantage of the split and the disease to conquer the Incan empire. In the end, the majority of natives that died during conquest of the Americas had never even seen a European.

Overall, the primary effects of colonization of the Americas by Europe were economic, religious, and pathological. New economic systems and imports generated extreme revenue for Europe while subjugating and enslaving the natives. In addition, all of the European trades were introduced to the New World. The Europeans made it a goal to spread their religion across the Americas. At the same time, they inadvertently spread a large quantity of diseases across the continent. Some of the consequences of colonization were good and some were bad, but in the end, colonization paved the way for the globalization of human interaction. 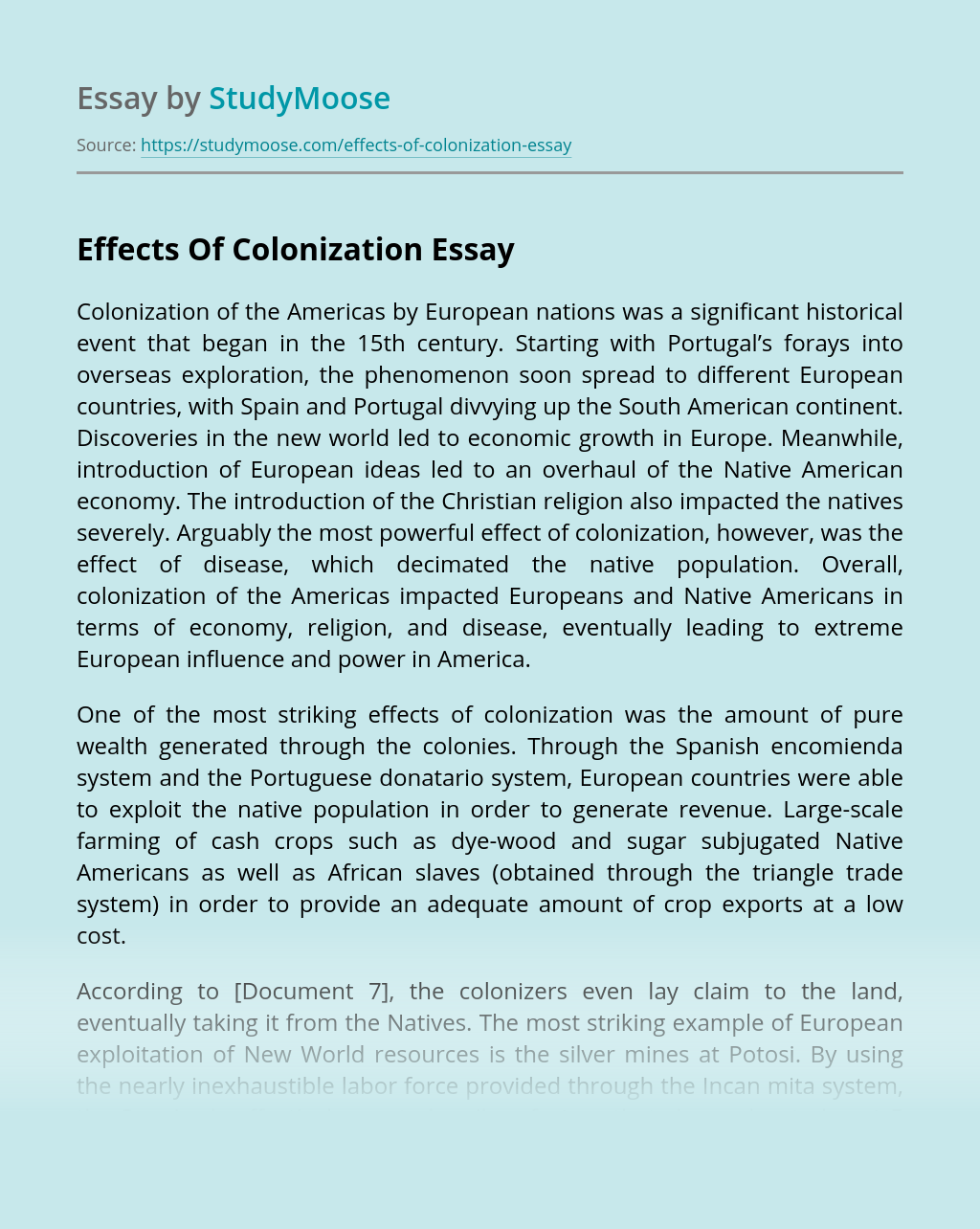 Don’t waste time
Get a verified writer to help you with Effects Of Colonization
Hire verified writer
$35.80 for a 2-page paper
Stay Safe, Stay Original