Compare and Contrast Spanish and British Colonization Efforts in North America Prior to 1763.

Spanish and English colonization efforts were very different with the English methods being more successful and profitable.

Spanish colonization of the Americas began in 1492 when Christopher Columbus found the Americas and mistook them for India. Spanish Conquistadors came with the goals of “God, Gold, and Glory” and started seeking gold and riches. The Spanish also came with instructions to convert the natives to Catholicism. They invested in short term ventures that while initially very profitable were not sustainable.

Don't use plagiarized sources. Get your custom essay on
“ Compare and Contrast Spanish and British Colonization Efforts in North America Prior to 1763. ”
Get custom paper
NEW! smart matching with writer

English settlers came as families or indentured servants to take advantage of the opportunities of the New World and to escape religious persecution. The first permanent English colony was Jamestown and it was founded with profit in mind. The colony was initially controlled by a joint stock company. This one was more similar to Spain in that most colonists were men looking for an opportunity in the New World. Other colonies were founded by religious groups fleeing persecution.

One of the most famous and well-known colonists are the Pilgrims who founded the colony of Plymouth. Unlike the Spanish, there was never really an effort to convert the Native Americans by English people. Rather than finding gold and silver, English settlers profited from the cultivation of crops such as tobacco. Other ventures were fishing, lumber, and ship building. The diversity mostly ensured-long term and sustainable profit.

Comparing Spanish and English colonial efforts reveals that significant differences. However, there were some similarities.

Both nations used New World colonies to further their mercantile goals. Both nations destroyed native populations through the spread of diseases. By the late 18th and early 19th centuries, both nations would lose their main New World colonies. Although Spain had over 100 years “head start” in the New World, Spain’s methods and reliance of unsustainable ventures like Gold and Silver greatly affected the country in the long term. In this, English colonizing was  much more profitable and successful then Spain’s.

Compare and Contrast Spanish and British Colonization Efforts in North America Prior to 1763.. (2016, Mar 23). Retrieved from https://studymoose.com/compare-and-contrast-spanish-and-british-colonization-efforts-in-north-america-prior-to-1763-essay 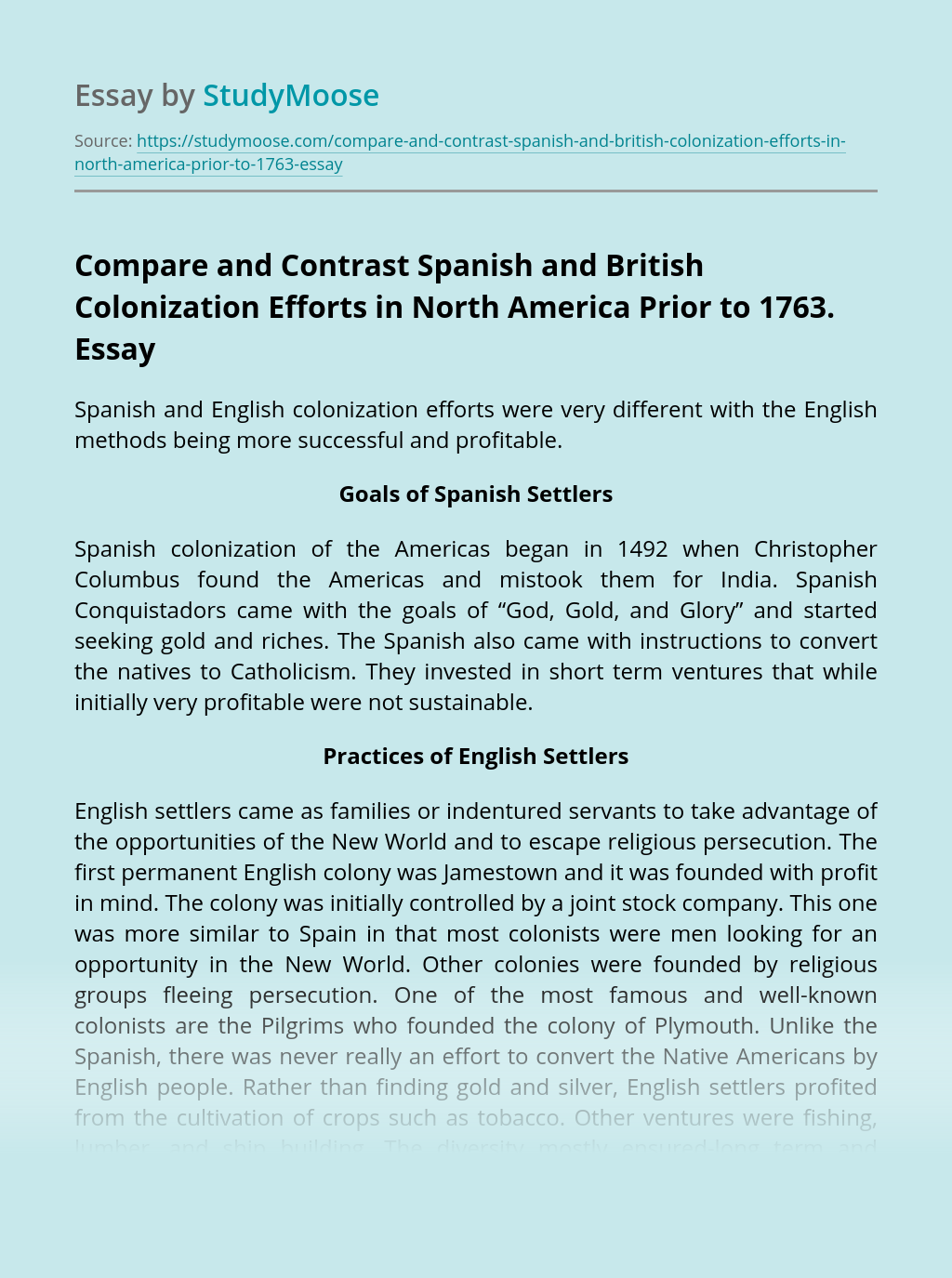