Philippine literature, written in Filipino, English, Spanish, and Philippine languages (e. g. , Cebuan, Ilocano, Tagalog, Hiligaynon, Pampangan, Hanunuo-Mangyan, and Bontok), has been influenced by colonization, economic and social systems, religion, and political movements. An oral tradition continues to exist through epics, riddles, poems, and legends of the country’s around sixty ethnolinguistic groups, reflecting a culture linked with the Malay of Southeast Asia and the influence of Indian, Arabic, and Chinese cultures.

With the colonization of the islands by Spain and the United States, Western forms such as the novel, short story, essay, and full-length play were introduced.

However, resistance to colonization also produced a tradition of radical literature. Philippine literary texts have been records of everyday life, historical documents, receptacles of values, and either participants in the colonial discourses of the colonizers, or testaments to freedom and sovereignty.

Precolonial Literature (1564) Among the literary forms during the precolonial period were riddles and proverbs, at the heart of which were the talinghaga (metaphor); the Hanunoo-Mangyan ambahan (a poetic form chanted without a predetermined musical pitch); the Tagalog poetic form tanaga; myths, fables, and legends; mimetic dances and rituals that at times involved a plot (for example, the Ch’along of the Ifugao); and epics, such as Lam-ang and Labaw Donggon.

Created in communal societies, the subject matter and metaphors came from common village experiences. Literature was essential in daily life, rites of passage, and survival. Songs provided rhythm at work, rituals healed the sick, and epics validated community beliefs. Each member of the community was a poet or storyteller, and the conventions of oral literature—formulaic repetition, character stereotypes, and rhythmic devices—facilitated transmission. The Spanish Colonial Period (1565–1897).

Literature during Spanish colonial rule consisted of both religious and secular literature, prevalent during the first two centuries, and a nineteenth century reformist and revolutionary literature that reflected the clamor for change and independence. Spanish colonial rule resulted in the establishment of a feudal system and the imposition of the Catholic religion. Religious orders monopolized printing presses; the first book, Doctrina Cristiana (Christian Doctrine, 1593), was published by the Dominicans.

The first printed literary work in Tagalog, the poem “May bagyo ma’t may rilim” (Though There Be Storm and Darkness) was published in Memorial de la vida Cristiana, (1605), by friar lexicographer Francisco Blancas de San Jose. In 1704, Gaspar Aquino de Belen published “Ang mahal na passion ni Jesu Christong panginoon natin” (The Passion of Jesus Christ Our Lord), a narrative poem of the life of Christ. Literature reaffirming religious values was dominant, including forms such as the sinakulo, a play on the passion of Christ, the ejemplo, which spoke of saints, and the komedya, which featured battles between Christians and Moors.

Nationalist literary historians believe that these feudal and colonial discourses contributed to the country’s colonization because they promoted beliefs and values such as acceptance of one’s destiny, deferring to authority, superiority of the colonizer, and the supremacy of the Catholic religion over Muslim beliefs. Spanish ballads, which inspired the komedya, also influenced narrative poetry, including the awit, with its four monohasloo. com http://hasloo. com/philippine-online-encyclopedia Powered by Joomla!

Generated: 22 July, 2009, 12:38 rhyming dodecasyllabic lines, and the korido, with its four mono-rhyming octosyllabic lines. The most significant awit was “Pinagdaanang buhay ni Florante at Laura sa cahariang Albania” (The Life of Florante and Laura in Albania, 1838), by Francisco Baltazar (1788–1862). It is considered the first nationalist literary text and is known for its indictment of colonial rule, its popularity, and its skillful manipulation of language.

The growth of a nationalist consciousness resulted in literature that called for reform. Written by ilustrados (Filipino students in Spain), many of these works either parodied religious literature or introduced new literary forms to better articulate issues. Marcelo H. del Pilar (1850–1896) criticized religious orders using the pasyon and prayers, using monetary currency to describe the friar in the poem “Friar Ginoong Barya” (Hail Father Coins) a parody of “Aba Ginoong Maria” (Hail Mary, a popular prayer).

National hero Jose Rizal (1861–1896) wrote the novels Noli me tangere (Touch Me Not, 1887), and El filibusterismo (The Subversive, 1891), works that portrayed Philippine society with a critical view, introduced realism, and are considered to be among the most important works in Philippine literature. The revolutionary organization Katipunan published in its newspaper Kalayaan essays and poems emphasizing that the Philippines was a free land before the coming of the Spaniards, thus justifying the need for a revolution.

“Ang Dapat Mabatid ng mga Tagalog” (What the Filipinos Should Know), by Andres Bonifacio (1863–1896), rallied Filipinos in the struggle against Spain. The essay “Kalayaan” (Freedom), by Emilio Jacinto (1875–1899), asserts that freedom is a basic right of all human beings. Along with the revolutionary love songs of the period (kundiman), these anticolonial and nationalist discourses contributed to the Filipinos’ struggle for independence. The American Colonial Period (1898–1946).

Philippine independence, declared by the revolutionary government on 12 June 1898, proved to be short-lived, ending with the invasion of U. S. forces. Resistance was evident in allegorical plays known as the drama simboliko (symbolic drama). In Tanikalang Guinto (Golden Chains, 1902), by Juan Abad (1872–1932), and Kahapon, Ngayon at Bukas (Yesterday, Today, and Tomorrow, 1903), by Aurelio Tolentino (1868–1915), characters represent the Motherland (Inangbayan, Pinagsakitan) and revolutionary Filipinos (Taga-ilog, K’Ulayaw, Tanggulan). In many of these allegorical

plays, the lead male character, who pretends to be dead but is actually alive, represents the revolutionary forces still fighting in the mountains. The anticolonial and nationalist discourses found in drama can similarly be found in poetry, whether written in Spanish, such as the poetry of Fernando Ma Guerrero (1873–1929) or in Tagalog, such as that of Jose Corazon de Jesus (1836–1932). While there were novels that dwelled on romantic love and adventure, and were reminiscent of the komedya, such as Nena at Neneng (1903), by Valeriano Hernandez Pena (1858–1922), many novelists gave a critical portrayal of society.

Pinaglahuan (1907), by Faustino Aguilar (1882–1995), and Banaag at Sikat (1903), by Lope Santos (1879–1963), focused on the exploitation of the working class and introduced socialist ideas. These novels participated in the anti-imperialist discourses of such organizations as the Union Obrero Democratico (Democratic Workers’ Union) The imposition of English as the medium of instruction resulted in the dominance of literature in English. Although Filipino writers mastered the craft of poetry and fiction using Western aesthetics, several chose to portray the countryside, thus emphasizing local color.

Collections such as How My Brother Leon Brought Home a Wife (1941), by Manuel Arguilla (1910–1944), may have painted idyllic portraits, but the emphasis on rural life was also read by critics as a protest against the industrialization brought about by U. S. colonial rule. A pioneering novel in migrant literature was America Is in the Heart (1946), by Carlos Bulosan (1913–1956); it focused on racial discrimination and the exploitation of workers in the United States.

During this period magazines such as Liwayway (1922, Tagalog), Bisaya (1930, Cebuano), Hiligaynon (1934, Ilongo) and Bannawag (1934, Iloko) became the primary outlet for short stories written in indigenous languages. Literary production was influenced by market and editorial policies, resulting in many works that used formulaic plots and deus ex machina endings. However, skillfully written stories such as “Greta Garbo” (1930), by Deogracias Rosario (1894–1936), “Kung Ako’y Inanod”.

(If I Am Swept Away, 1907), by Marcel Navarra, and “Si Anabella,” (Anabella, c. 1936–1938), by Magdalena Jalandoni, indicted the colonial way of thinking, explored psychological realism, and created complex characters.

The tension between colonial and anticolonial forces in Philippine society was echoed in literature, with the “art for art’s sake” philosophy of the poet Jose Garcia Villa (1906–1997) on the one hand and the social consciousness of Salvador P. Lopez (1911–1993), as emphasized in his essay “Literature and Society,” on the other. Much work hasloo. com http://hasloo. com/philippine-online-encyclopedia Powered by Joomla! Generated: 22 July, 2009, 12:38 during this period was both a result of and a response to U. S.colonial rule and capitalist values.

The cultural policy of the Japanese occupation (1942–1945), which encouraged Tagalog writing, resulted in a harvest of works. These were compiled in the collection Ang 25 Pinakamabubuting Katha ng 1942 (Twenty-Five Best Stories of 1942). By following the guidelines of the policy however, many of the works focused on everyday life that seemed untouched by war. Exceptions were several stories where males were conspicuously absent or characters seemed to be waiting for loved ones, making it possible for critics to read in these stories references to the Filipino guerrillas fighting the Japanese forces.

Literature, through satirical skits performed by stage actors, and poems, songs, and plays performed by the guerrillas played an important part in the anti-Japanese movement. Contemporary Literature Contemporary literature has been influenced by various critical theories, among them New Criticism, which emphasizes the literary work as a verbal construct, and Marxism, which produces works political in intent and content.

The production of works that were anti-imperialist and revolutionary in content, such as Hernandez’s prison poems, alongside works emphasizing a revolution in form, such as the comma poems of Villa, reflected a society that, although independent since 1946, had remained feudal, economically dependent on foreign capital, and heavily influenced by U. S. culture. The search for national identity, an upsurge of nationalism, and debates on the national language have shaped Philippine literature.

Literature from the 1980s and 1990s saw renewed interest in regional language, the publication of anthologies of feminist and gay literature (for example, Filipina I, 1984), and programs geared toward developing writers among peasants and workers in the hope of creating a truly national literature. Further Reading Lumbera, Bienvenido, and Cynthia Lumbera. (1997) 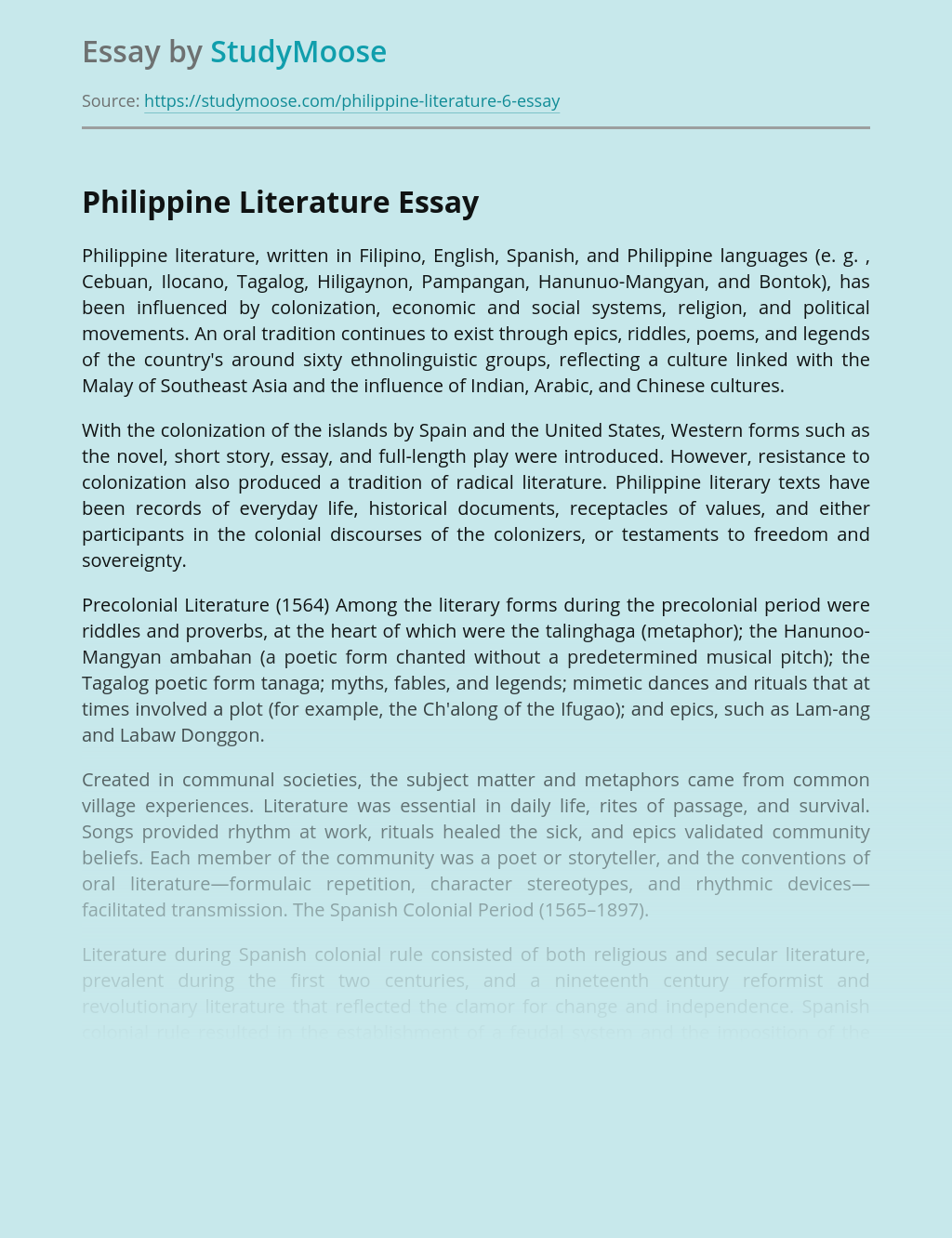 During the 18th century, a great change occurred in Britain. Britain became an industrialized country and an empire. The Industrial Revolution can be regarded as a technological change in Britain when manufacturing began to rely on steam power rather than on animal labour or wind power. The overall economic shift towards large scale industry rather...

The situation of the world in rizal time

In the time that Rizal was not yet born, the entire Philippines was still under the Spanish colonization, all the uprising of Filipinos against the oppression of the Spaniard did not prosper due to the advantage of Spanish weaponry in that time. The rebellion of Francisco Dagohoy, the longest uprising against Spain which lasted 8...

I. Pre-Colonial Period – Consisted of early Filipino literature passed down orally; oral pieces have a communal authorship – it was difficult to trace the original author of the piece since oral literature did not focus on ownership or copyright, rather on the act of storytelling itself; – Many oral pieces became lost in the...

Why Did Texas Almost Fail as a Spanish Colony?

Why do the ventures of man fail? The ventures of men fail primarily due to a lack of planning. In the case of Spanish colonies in Texas this holds true. The Spanish first set eyes on the Texas coast in 1519 and in 1821 they lowered their flag for the final time in Texas. The...