Abstract Is English Killing other languages? As we went on to know and find out what people think about question, we learned and observed people’s different opinion, rather we should term it as conflicting. Some say we cannot blame the English to be a language killer, world is changing and those who couldn’t survive die out, same theory goes for the languages also. While on the other hand people are very critical of the growing usage of English. A section of people also see it as a means of connecting cultures and promoting globalization.

Don't use plagiarized sources. Get your custom essay on
“ Is English killing other languages ”
Get custom paper
NEW! smart matching with writer

What we learned through working with questionnaires and interviewing people, is we cannot generalize anything, like yes this is it because majority thinks so, may be the next person you go to have a totally different opinion to say about it. It’s the person’s circumstances in life, his age, occupation, the environment he lives in, is brought up, that mainly shape his thinking process.

Keeping in mind all these differences, and what we learned from people. We gave our best efforts to get a conclusion about this question.

Introduction
All over the world there is a concern about the disappearance of languages.
Languages are dying in a very big way everywhere in the world. And who is to blame is the much asked question. And our topic for the project, “Is English Killing Other Languages” is a big question, whether we can blame alone English as the cause of increasing number of extinct regional languages or other factors are also at work.

We went on to find out people’s notion to this question. Definition of Language

We will begin by delving into the question that what exactly is a language. The answer that we get most often is that, it is a means of expressing oneself, and of communicating with each other. The dictionary will tell us that it is the method of human communication, either spoken or written, consisting of the use of words in a structured and conventional way.

We can also add non-verbal communication on top of this. What we think often is true, but it is just one small aspect of what really a language. Language is much more. A major part of is dependent on communities of speakers”. In truth, language is far more than a means of communication; it is a carrier of the entire social history and cultural heritage of a people. Through language, we communicate words, norms, ideas, social practices, values and emotions .

The entire culture of a people is encapsulated in what we call language. So it is just not a means of communication that we are talking here of, it is the entire culture that is at stake with a language becoming endangered or extinct.

Having this definition of language in mind, we begin with what we gathered from people over the internet .Talking firstly about the Mark Tully, former BBC India correspondent who sees English from a completely different viewpoint. Mark definitely doesn’t see English as a language killer infact he makes one think the growing usage of English from a different perspective. What he says is “English is one of the advantages India has, which are said to be propelling it to economic superpower status.

So Why not use it”. He clearly means us to reflect towards the job opportunities and many other things that English has created how it has helped India to improve its economy. Also Former editor of the Economist, Bill Emmott said India fell short of china in almost every measure except ability to speak English .So why should not India built on its one advantage. Not only Mark and Bill many other people also see English as the means of creating more opportunities. People have also cited life changing experiences when they acquired the ability to speak fluently in English. On the other hand we also have people criticizing the growing usage of English language .

As Nicholas Ostler founder of endangered languages [ELF] said “English is killing off scores of minority languages in its wake to spread, with English creeping in among younger generations everywhere as the language of mass communications and symbol of progress minority regional languages are becoming increasingly difficult to accommodate”. Marc Ettlinger PhD linguistics UC, Berkeley had also quite the same opinion. He says often Languages associated with a nation state kill minority languages as a function of Nationalized school where success is determined by knowing the dominant language.

Also in Centralized government dominant language is crucial to finding a job. Social pressure to fit in with what everyone is doing. Urban migration and many other reasons. Fortunately in India government does promote other languages also. But by default nowadays the main language seems to be either Hindi or English. Because of English becoming a global language as well as important for getting a job. What mostly people think is that English is just a requirement in this globalized world. It makes us a global player. It makes us versatile. One definitely needs to adapt to it. This was all in what we found through people on net.

Now looking at the extinct languages of India, referring to a survey and the reasons they say behind the increasing extinct languages. According to People’s Linguistic Survey of India, India speaks 780 languages, 220 lost in last 50 years. The survey was conducted over the past four years by 3,000 volunteers and staff of the Bhasha Research & Publication Centre.

It concludes that 220 Indian languages have disappeared in the last 50 years, and that another 150 could vanish in the next half century as speakers die and their children fail to learn their ancestral tongues. Now the looking upon the reasons that they saw during the survey behind the languages being extinct, is the small group of people using a language, increased use of English or other reasons that are responsible for this extinction. Firstly ruling out the option that the small group of people using a language is the reason for language extinction. Because history provides evidence that very large languages had also gone down sometimes.

Latin is one example. The (ancient) Greek language is another, Sanskrit is the third one. A language does not have to be small in order to face extinction. That is the nature of language. So this equation that the government will come will do something, then language will survive, that has to be taken out of all thinking. It is a cultural phenomenon. And we can see that all over the world there is a concern about the disappearance of languages. Languages are dying everywhere in the world.

Secondly, wherever the English language has gone in the last 200 years, it has managed to wipe out the local languages. But in India, English did not manage to do that because Indian languages have a historical experience of having to deal with two mega languages in the past – one was Sanskrit, and after that, Persian. So Indians know how to cope with English. And that is why even today, though so many of us use English as if it is our first language, we still do not pray in English, and we do not sing our songs in English.

So English is not the reason. When a language imbibes words from outside, it grows. Languages grow by taking words from other languages. Every language is from beginning to the end, a polluted language. The threat will come. Hindi has its roots – there are 126 languages surrounding the Hindi belt.Because they are feeder languages, they feed into Hindi, they are the roots for Hindi. So the bottom line is Hindi definitely will not extinct and English certainly is not the reason for language extinction. English is the sky.

The sky will not harm the tree, but if you chop the roots, a mighty tree can fall. This happened with Latin, and should not happen with Hindi. Out attitude of neglect towards smaller languages is a threat to larger languages, English is nowhere to blame.

Is English killing other languages. (2016, May 31). Retrieved from https://studymoose.com/is-english-killing-other-languages-essay 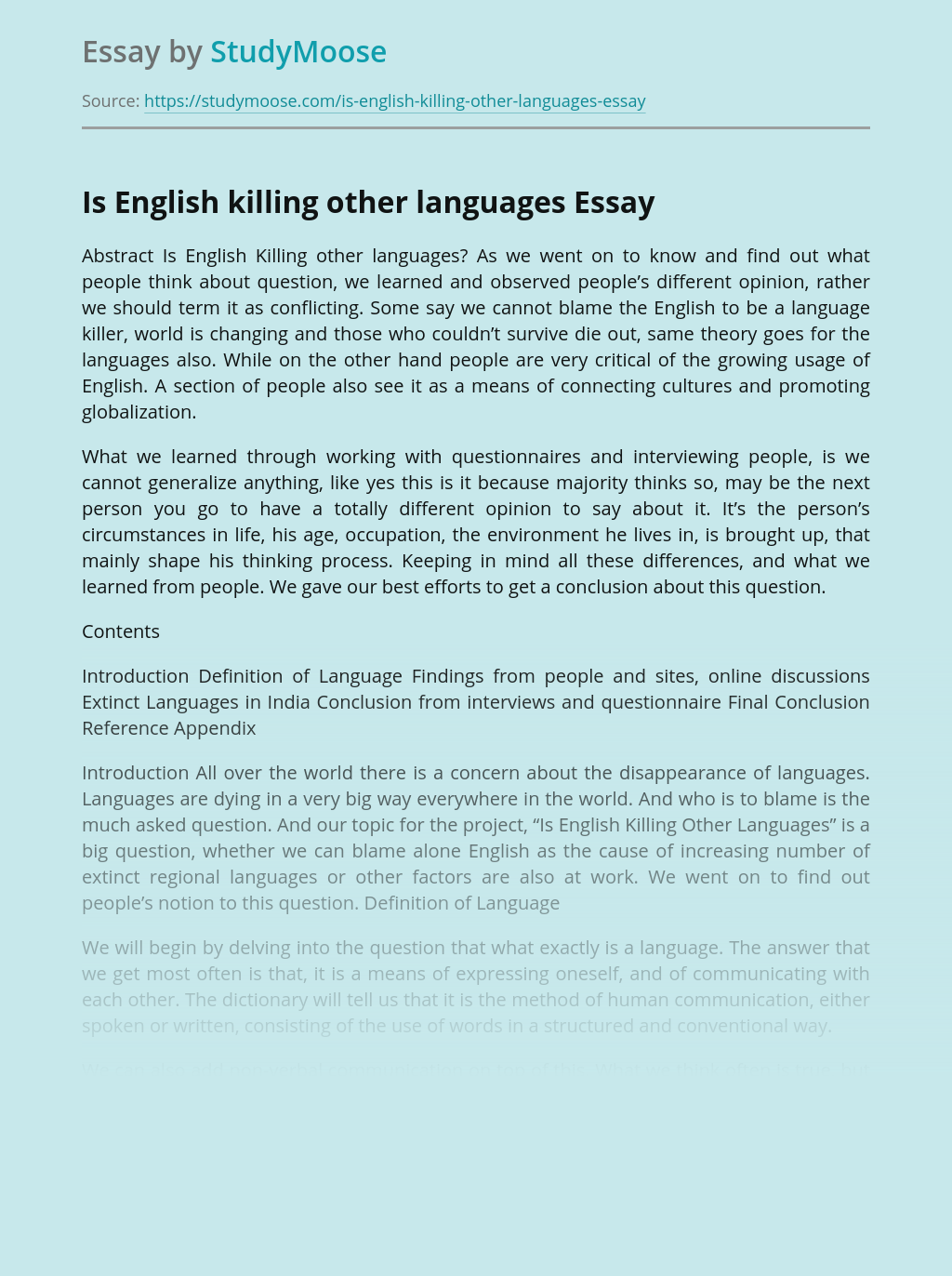