Describe the two killings, pointing out any similarities and differences between them.

George and Lennie, two part-time ranch workers, are traveling from place to place to find farm work. They have to move often because Lennie is big and strong but can’t control his own strength as he is mentally retarded and gets into trouble often. They are trying to be out of the ordinary and make their dream, of owning a piece of land come true and not having to work tirelessly for a worthless salary.

Don't use plagiarized sources. Get your custom essay on
“ The killing of Candy’s old dog foreshadowed Lennie’s death ”
Get custom paper
NEW! smart matching with writer

George hopes that this time they can stick to their workplace and actually get their dream to come true even though he knows from the start it is a false hope. He knows that Lennie will get himself in trouble because he can’t control his feelings or his power as he is mentally handicapped.

Lennie is described as a child; always looking for support and advice from George and can’t do anything without George’s opinion who is like a father to him.

Lennie is also described as a bear; he is as tall as a bear, has big arms like a bear and walks like a bear. In addition he is compared to other animals such as a horse “snorting into the water like a horse” and having a dog’s loyalty. As Lennie is retarded and very strong he can be very dangerous to others at times.

George and Lennie find work in a ranch in Soledad. Candy one of the worker’s there is a ‘swamper’.

He has a dog that he looks out for. The dog is very old now and crippled but Candy says “I’m so used to him, I had him since a pup.” Candy is over-protective towards the dog even though every one working in the ranch wants Candy to kill the dog Candy isn’t letting them convince him. Carlson offers to kill the dog for Candy and says “Right back of the head. He wouldn’t even quiver.” Candy finally gives in. He doesn’t have the courage to kill the dog himself so he lets Carlson do it for him. Carlson takes the dog some length away and shoots him later burying him. When the shot rings out Candy just turns away in grief and sadness.

On the Sunday, two days after Lennie and George had joined the ranch, Lennie’s death happened. Lennie was in the barn and he had killed the pup he had got from Slim while stroking it. He was about to hide the puppy when Curley’s wife came into the barn. They got to talking and Lennie said that he liked to feel soft things. Curley’s wife said that she had very soft hair and she let Lennie stroke her hair. Lennie started stroking and wouldn’t let go so she screamed and told him to stop but he put his hand around her mouth “Please don’t do that. George’ll be mad.” He shook her violently because she wouldn’t stop struggling and broke her neck. He realized what he had done and ran away.

Candy found her dead body and secretly told George. George realized what had happened and knew he would be accused because Lennie only listened to him, so he told Candy to tell all the ranch workers about the death. George then took Carlson’s gun while Curley decided to go after Lennie. George tried to persuade everyone not to kill Lennie “The poor bastard’s nuts. Don’t shoot ‘im”. George then went up ahead as he knew where Lennie was hiding and crept up beside him. Lennie asked George if he was angry and that could Lennie still tend the rabbits. George said that he was not angry at Lennie and told him to look down the river to imagine seeing their farm. George took out the gun and pointed it to the back of his head and shot Lennie. Lennie fell back without quivering.

There are many similarities to the killing of both Lennie and Candy’s old dog. The obvious ones are that the same gun was used to kill both of them, they were both shot at the back of their heads and they fell down without quivering. Other similarities are that George and Candy were both over-protective about Lennie and the dog respectively and did every thing they could to protect them from their eventual death. As Lennie is described as a dog it is foreshadowed that something is going to happen to Lennie when the dog is shot dead because the dog had no significance in the story except to foreshadow Lennie’s death.

They share similar characteristics eg: helpless and always needing support and in this book similarly described situations have had similar outcomes like wit the girl in the red dress and Curley’s wife as well as all the mice killed with Lennie’s hand. George and Candy are very lonely without their partners and need them to help each other fulfill their dreams. When their partners die they both know that so have their dreams. At the time of the dog’s death everybody wanted him dead as he smelled and everybody wanted Lennie dead for what he did to Curley’s wife. Lennie is described as an animal so it is appropriate that he dies in the hands of nature as did the dog so they are united with Mother Earth and find peace. They don’t have to worry about anything now as Mother Earth will take care of them.

There were some differences in the deaths of the two. One big difference was that George killed Lennie himself. He was there at the time of Lennie’s death and made his passing easier by bringing forward his dreams and aspirations. George forgave Lennie for what he had done so that Lennie felt happy and said that George was never mad at him while Candy was not there at the end for his dog and he regretted that “I shouldn’t ought to of let no stranger shoot my dog.”

There was also no proper burial for Lennie probably because no one regretted his death while the ranch workers did want to kill the dog they had respect for it and buried it properly. Candy could now get another dog as Slim had a litter but George had to be sure he was doing the right thing because he would never get Lennie back. He knew it was the right thing to do for Lennie as he was a danger to himself and everybody around him. Lennie could have lived a life but he was too dumb and unaware of his strengths and how to use them so it was better for him to rid him of his misery. For the dog however it couldn’t function at all and didn’t have any life left “Got no teeth, damn near blind, can’t eat.”

In conclusion we can see that there are many ways in which the killing of the dog foreshadowed Lennie’s death and when the reader reads the book it is apparent to them that something dreadful is going to happen later on as Lennie is so often compared to a dog. It makes the reader conscious that something can happen to Lennie now since the dog has died and there is a lingering feeling that this will be the cause of George’s dream not coming true. I think this is the perfect way for the author to create a tense atmosphere and help shape the ending of the story and Steinbeck has been successful in achieving that. 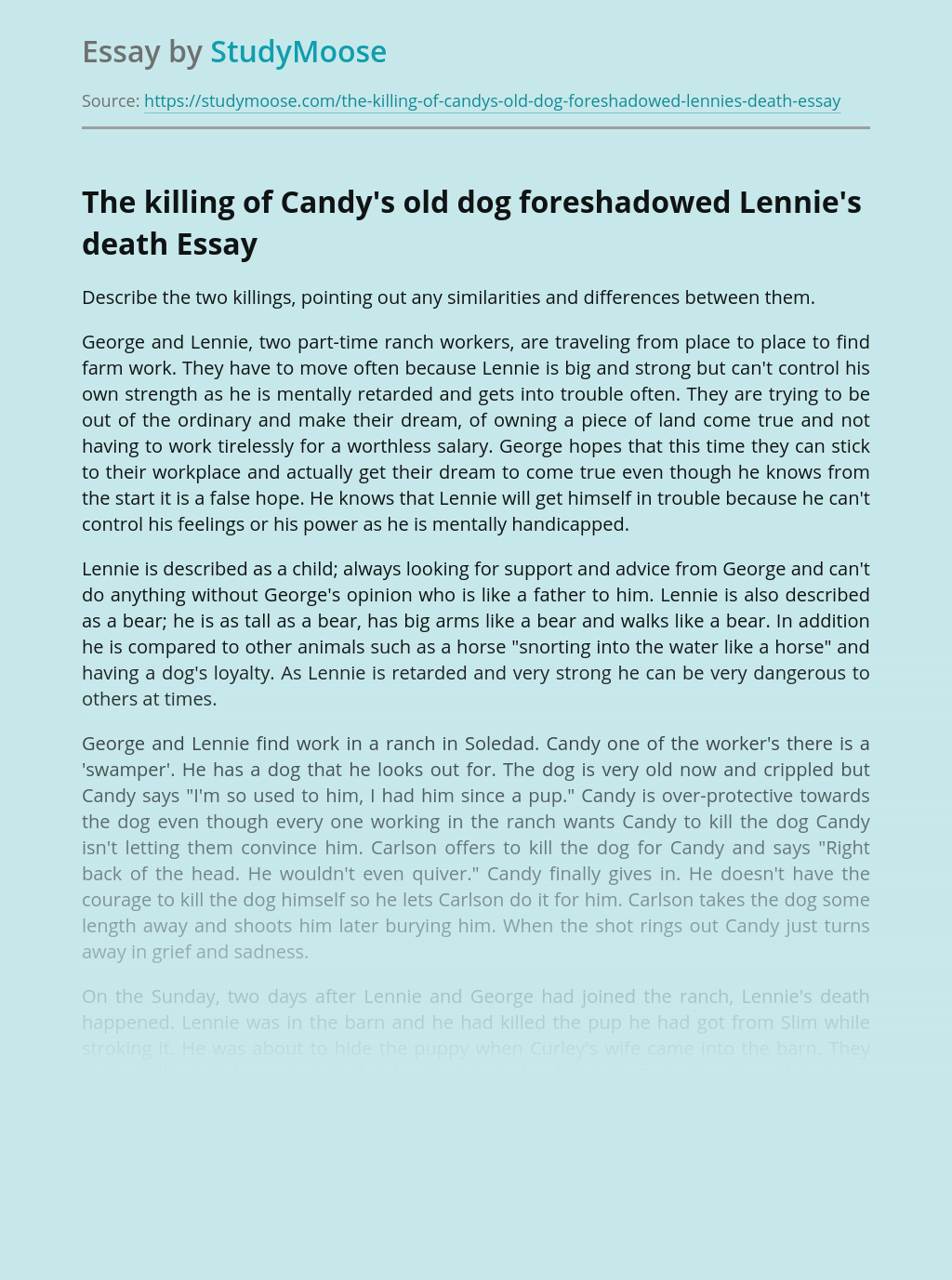