Which of the other characters do you feel more sympathy for: Curley, Candy, Crooks or George?

It’s possible to feel sorry for all the characters in ‘Of Mice and Men’ especially Lennie and Curley’s wife because they die. Which of the other characters do you feel more sympathy for: Curley, Candy, Crooks or George? Give reasons for your answer.

Having read the novel and gaining insight into the characters main role and aspects of hardship they have to undergo, either due to their own actions or others, it arouses sympathy within the reader. The characters Curley, Candy, Crooks and George all gain my sympathy, however some do so more than others.

Don't use plagiarized sources. Get your custom essay on
“ Which of the other characters do you feel more sympathy for: Curley, Candy, Crooks or George? ”
Get custom paper
NEW! smart matching with writer

I personally feel great sympathy towards Crooks in comparison to the rest of the characters.

Curley is the boss’s son hence has authority and can say and do whatever he wishes – ‘won’t ever get canned cause his old man’s the boss’ (pg 28). Hence, from this alone it’s made apparent to the reader, Curley’s able to all that he likes without fear of being in trouble, as he’s the boss’s son.

I do feel slight sympathy towards Curley, as his wife seems to betray the role she is meant to play as his wife. She is continuously out and about flirting with other men, (page 33 ‘ she put her hands behind her back and leaned against the door – frame so that her body was thrown forward) rather than having a close relationship with her husband.

She takes no interest in her husband, as we are told Curley’s wife is always looking for men, ‘ she can’t keep away from guys’ (page 54).

This isn’t fair on Curley, as he doesn’t have the ability to keep his wife to himself and enjoy the pleasures of married life with his wife. Thus, seeing as Curley’s wife does in fact leave Curley and doesn’t fulfil her roles as a wife, I do feel sympathetic towards Curley. However, seeing as he is the man he could have prevented this from happening, yet we don’t see him striving to do so.

Curley has his hand crushed by Lennie, yet this doesn’t grasp my sympathy. Curley injures himself as a result of his own actions. He starts the fight with Lennie, ‘ what the hell you laughin’ at?'(Page 66) Yet, Lennie wasn’t laughing at Curley, rather at memories of the ranch. However, Curley saw it as an opportunity to exert his frustration, therefore he stepped forward to initialise the fight. Lennie retaliated and unknowingly crushed his hand, as he hadn’t done so deliberately, nor had he intended to do so, ‘ I didn’t wanta hurt him (page 66).’ Hence, although this incident resulted in Curley being hurt, I wouldn’t sympathise with Curley as he asked for the fight. Also because although Lennie retaliated, he done so in self defence and was unaware of what the outcome of his strength would be.

Thus from looking at these incidents, they don’t make me feel considerate towards Curley. He had full authority, hence could have put his wife under his rule, yet he never attempted to do so. He began the fight, thus the end result, he deserved. Therefore I don’t feel much pity towards him.

George is seen to be Lennie’s guardian throughout the novel. There are no incidents where the author has attempted to gain the reader’s sympathy for George. Although George does mention how his life would be so much easier without Lennie, ‘if I was alone I could live so easy,’ (page 11), George never did desert Lennie. Thus although Lennie was a burden upon George, I wouldn’t sympathise with George having to take care of Lennie because in turn George has a companion with him all the time unlike others.

However, near the end of the novel, George is obliged to kill Lennie, his closest companion, to make apparent his innocence and to justify the fact that he wasn’t involved in the death of Curley’s wife. This incident does make me feel pity towards George as he was compelled to turn the gun on his closet companion that must have been a great battle of his desires.

Therefore, as an end result I wouldn’t say I feel an intense amount of sympathy in relation to George. This is because he doesn’t really undergo anything-tremendous leading to him having to undergo a variety of hardships, in comparison to Crooks.

Candy is the swamper in the novel and is elderly. Candy’s only companion was his dog, yet he was obliged and talked into shooting it by Carlson. Candy’s dog was the only thing Candy had besides him for a long time, ‘ I had im too long’ (page 47), thus having to depart from him was a hardship he was made to undergo and also a great loss to him. The fact that Candy didn’t have much of a say into the shooting of his dog, gains my consideration. However I don’t feel extreme sympathy for Candy as the dog was extremely old as described by Carlson, ‘ got no teeth. He’s all stiff with rheumatism’ (page 46) thus he would have died shortly anyway, hence, Candy would have had to lose his dog in the very near future.

However the sympathy and pity I feel towards Candy is limited as the stress he had undergone was masked by hope in gaining a dream farm with Lennie and George. The fact that he has hope that his dream of gaining a farm and land where upon he wouldn’t be made to work extremely hard, comforts him as it enlightens his future. Hence, he’s made to struggle for just a short period of time and this struggle isn’t much of an issue to him as he looks more in-depth at what awaits him rather than the state he is in at the present time.

As mentioned earlier, I feel great pity, sympathy and commiseration towards Crooks, the ‘nigger’ who tends the horses on the ranch. Crooks is the only black man apparent on the ranch in the novel, which alone portrays the fact that he would have been seen as a vagabond by the rest of the ranch workers and the boss, as they were all white.

Near the beginning of the novel, before Crooks is spoken of deeply, he is referred to as ‘nigger,’ ‘ya see the stable buck’s a nigger,'(page 20). The fact that Steinbeck has used the word ‘nigger’ to refer to Crooks rather than ‘black man’ suggests a significant issue. It makes the reader aware of the racism apparent at the time. The use of the word ‘nigger’ also implies the black people at that time were seen to be mediocre in comparison to others. This alone gains my sympathy as it makes me aware Crooks was the only one who was seen as an outcast and inferior due to him being black – and he had no power to overcome such an issue.

Steinbeck mentions Crooks had many possessions, ‘ and scattered about the floor were a number of personal possessions; for being alone’ (page 70). This alone illustrates the loneliness of Crooks, again all as a result of his colour. It’s due to him being black that he wasn’t able to socialise with others.

In an indirect manner, the author makes the reader aware Crooks wasn’t given the rights of a civilian nor was he treated as one, by mentioning he possessed ‘a mauled copy of the California civil code for 1905.’ I feel sympathetic towards Crooks as although he’s human, it is all due to his colour, him being black, that he’s not given the same rights as others.

Crooks is said to have a ‘crooked spine,’ ‘his body was bent over to the left by his crooked spine.’ This portrays the working conditions he was made to undergo as being those of great hardship. The intensity of work load he was made to carry out had disfigured his spine, which makes me feel sorry for him as his physical condition and health was made to suffer all due to him being made to carry out tough work as all saw him as being inferior, hence took advantage of him.

Crooks would himself rub and massage his spine (page 71) due to it being in pain because of the hard days work he had carried out. The fact that he wasn’t dismissed, even for a short period of time, nor did anyone ever ask about his well-being indicates that no one was concerned about him.

All those in the bunk house wouldn’t allow, neither invite Crooks to play cards with them because he was black, as he said to Lennie ‘ I can’t play because I’m black. They say I stink’ (page 72). The fact that Crooks is described as stinking makes me feel pity for him as all judge him by his colour and thus treat him in an inhumane manner.

Crooks is lonely thus takes advantage of the presence of Lennie,’ long as you won’t get out and leave me alone, you might as well set down’ (page 73). Crooks being lonely all the time makes me feel greatly towards him and the state he’s made to live in as he is isolated from the outer world and can’t socialise, all due to his colour, which is pure racism and discrimination.

Anything said by Crooks would be seen as irrelevant as he himself said to Lennie, ‘ this is just a nigger talkin’ an a busted-black nigger. So it don’t mean nothing, see?’ (page 74). This indicates, speech and opinion of a black person at the time, would be pushed aside, hence, Crooks wasn’t given the opportunity to speak out due to the intensity of the people’s thoughts that a black man was worth nothing. This makes me feel great sympathy towards Crooks, as there was no freedom of speech, he was restricted in all terms, be it action or speech.

Overall, I feel great sympathy and pity for Crooks the most. This is because he is discriminated against and it’s all a result of his colour – all due to him being black. He’s lonely and cut off from the outer world, again due to him being black. No one visits him, as he is of a different background. He’s ‘given hell by the boss when he’s mad.’ Everything undergone by Crooks is hardship, distress, loneliness – it’s everything on the negative side.

Although Curley undergoes difficulty due to his wife, he had the authority to prevent it. Candy’s hopes extinguish all past distress. George undergoes limited hardships and is again able to prevent it. However, it is Crooks who sees no hope at the present time, neither in the future. He isn’t permitted to speak out, nor can he socialise – thus I feel commiseration mostly towards Crooks.

Which of the other characters do you feel more sympathy for: Curley, Candy, Crooks or George?. (2017, Oct 30). Retrieved from https://studymoose.com/which-of-the-other-characters-do-you-feel-more-sympathy-for-curley-candy-crooks-or-george-essay 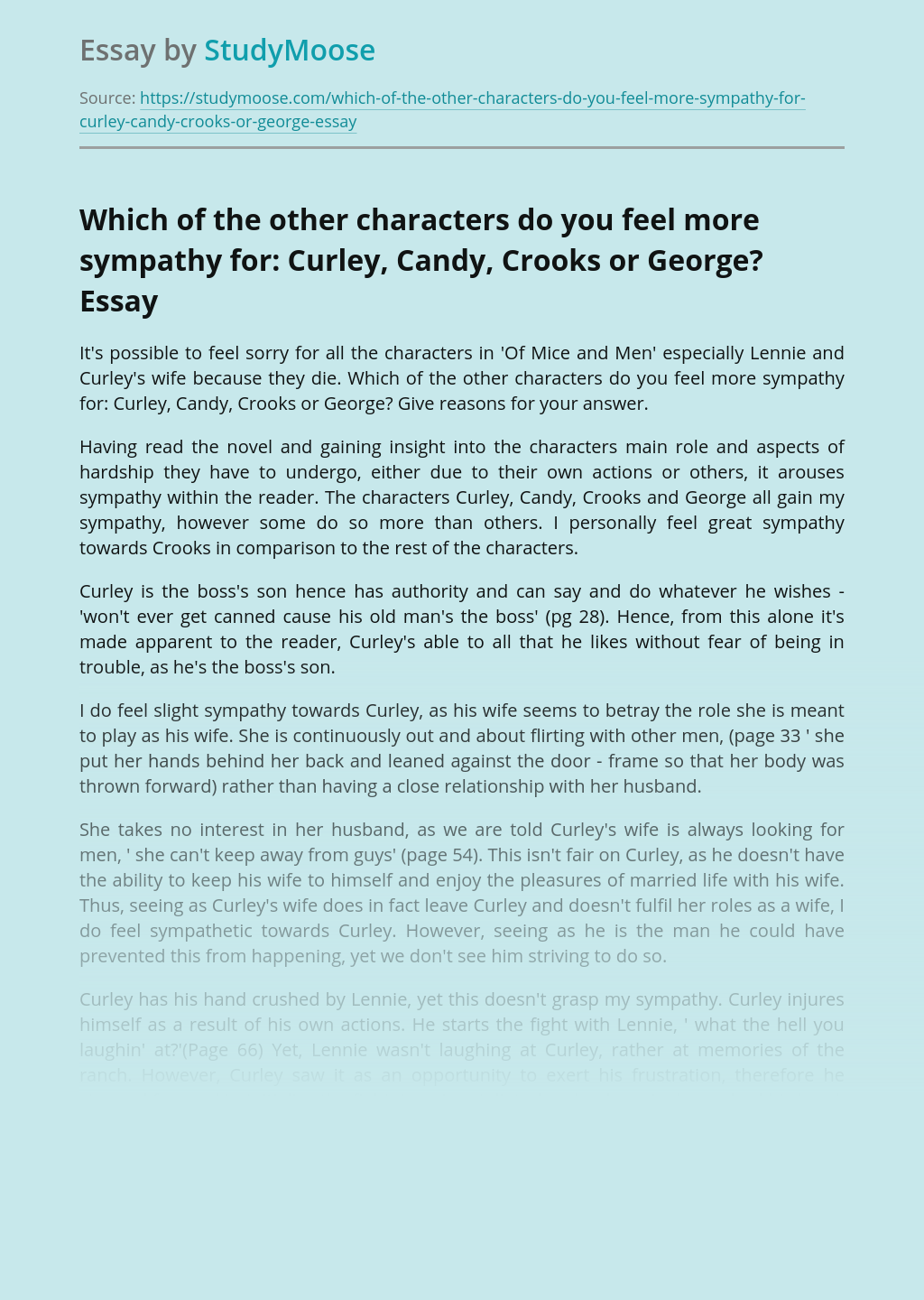