An important theme running throughout “Of Mice and Men” by John Steinbeck is of loneliness. Two pivotal characters are shown in particular as examples of this theme. The first character is “Curley’s Wife” and the second is the stable buck, “Crooks. ” Both for their own individual reasons are deprived the attention, love and compassion that they crave. They are the most perfect examples of loneliness in the novel and they are presented as characters in contrast to George and Lennie – who live on the companionship that they share.

Don't use plagiarized sources. Get your custom essay on
“ Crooks and Curley’s wife ”
Get custom paper
NEW! smart matching with writer

Curley’s wife had hastily married Curley to escape living with her mother. Since marrying Curley, his wife has been ignored by him, not receiving the satisfaction of marriage both emotionally and physically. She does not receive the love, attention or companionship from Curley so sets out to seek the attention of other ranch men. She is described as a “tart” by the other ranch men because of her sexual mannerisms around the ranch, aiming to grab the attention of the other men.

She is also described by George as “jail-bait” when he warns Lennie to stay away from her.

It is established very early that Curley’s wife is deprived of companionship. Loneliness is like an illness for her and she sets out to cure it by presenting herself sexually around other men. Although she is conveyed as an evil figure because of her ability to land others into trouble, she most certainly is not evil. On the other hand, she is portrayed sympathetically by Steinbeck to show how a person’s loneliness can lead to their demise.

Furthermore, we learn that Curley’s wife is not an evil figure because of her conversation with Lennie before her death.

She had wanted to be an actress (“coulda been in the movies”) but had her dreams crushed when she was not given the letter by her mother. But during the conversation, the reader is given the impression that Curley’s wife is cherishing that moment of dialogue with Lennie – although he may not be on top of the hierarchy of men in the ranch. She speaks of the lack of companionship that she suffers from when asking Lennie, “Why can’t I talk to you? I never get to talk to nobody. It gets awfully lonely. ” At this point the reader can sense the grief that Curley’s wife feels in the tone of her voice.

The desired effect from Steinbeck may be for the reader to feel sympathy towards Curley’s wife. We learn that Curley’s wife is not an evil figure and only behaves in the way she does, is to grab the attention of the men around her. The other character suffering from severe loneliness throughout the novel is Crooks, the stable buck. He is portrayed to be an intelligent man because “he reads alot. ” This is alongside Steinbeck’s idea that you don’t have to be intelligent to be rich. But also, Crooks could have been rich if it had not been for the discriminative society that he lived in.

Crooks is nicknamed as the “******” throughout the novel and this reflects the racially prejudice society of the USA in the 1930s. Crooks is also portrayed with sympathy, similarly to Curley’s wife. But unlike Curley’s wife, Crooks feels lonely because of the way he is segregated by the other men of the ranch. He does not sleep in the same bunk house as the other ranch men and is given his own room. He admits that he feels lonely and is left out by the other men because of his race, “cause I’m black.

” But the reader is made to feel sympathy towards his loneliness because as a result of the society’s racial prejudice, he is easily crushed. An example is with his encounter with Curley’s wife. “You know what I can do to you if you open your trap? ” The reader here is made to feel sympathy towards Crooks because of the unfair treatment that he receives. Here, he is threatened by Curley’s wife – she threatens to accuse him of rape. The reader here is brought to terms with the unfair and cruel treatment of a lonely man in an unjust society.

Overall, John Steinbeck uses these characters to make the reader realise the suffering a person can go through with loneliness. Steinbeck uses these characters in contrast to George and Lennie to stress the importance of companionship. The writer portrays the harshness of society – the suffering a person could be made to go through if left on their own – as Crooks found. Also, with loneliness and a thirst for love and companionship a person could lead to their own demise – as Curley’s wife found. 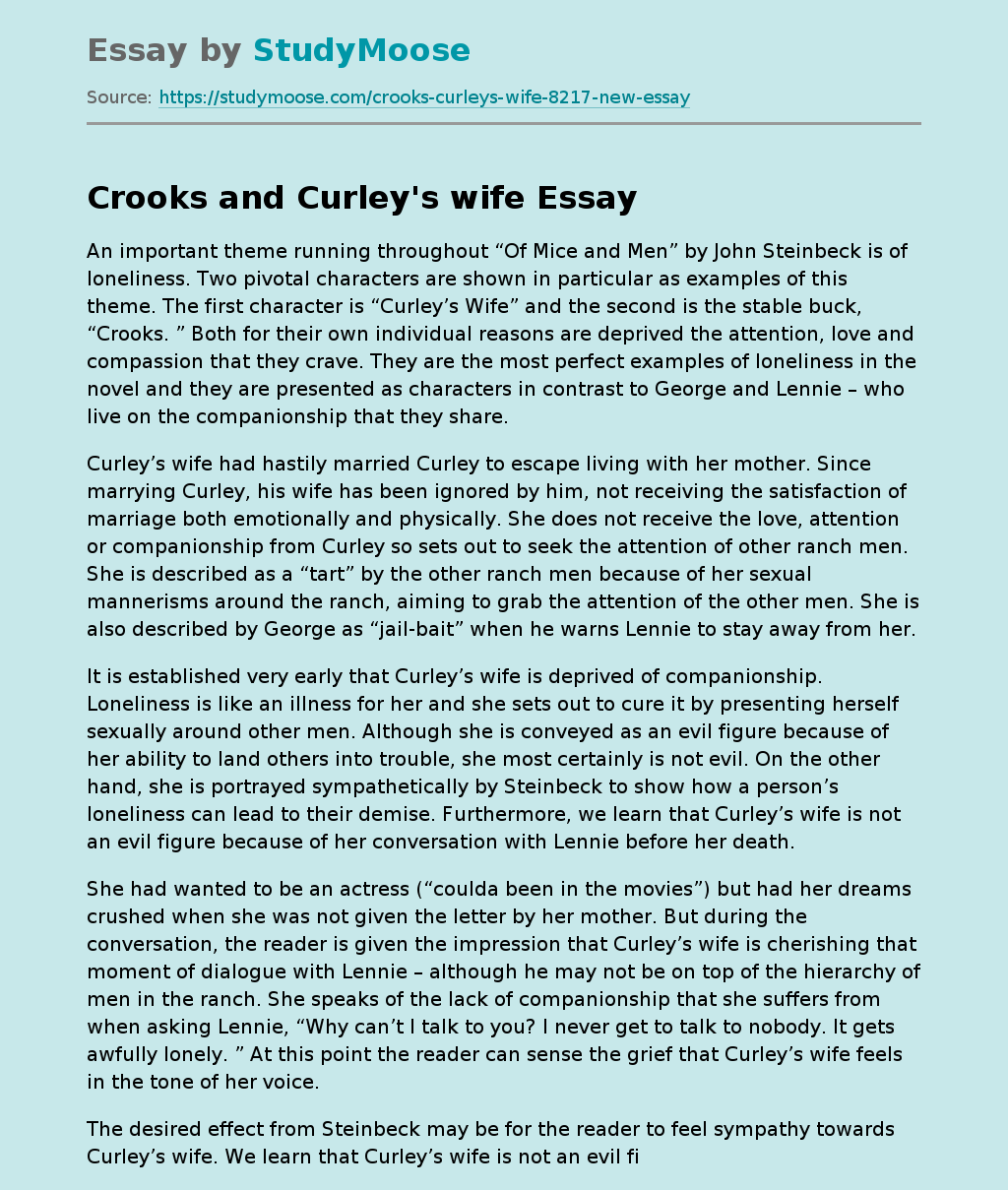