Of Mice and Men: Character Analysis on Curley's Wife

Have you ever felt so left out or unwanted that you approach anyone available whether they care about you or not? When a person needs someone to talk to but there is no one there, what does one do? In John Steinbeck’s, Of Mice and Men, Curley’s wife is very lonely and feels extremely useless. She feels that the only way she can get attention is by going around and flirting with guys. Although everyone see’s Curley’s wife as a “whore” who just wants to seduce guys, her true desire is to have someone she can go to who makes her feel loved.

Don't use plagiarized sources. Get your custom essay on
“ Of Mice and Men: Character Analysis on Curley’s Wife ”
Get custom paper
NEW! smart matching with writer

Curley’s wife puts her self out there as a desperate flirt, but while she’s flirting with guys she’s only looking for someone she can talk to. When Curley’s wife is talking to Lennie she tells him how she doesn’t get to express her feelings while living on the farm.

She realizes that Lennie has mental disabilities therefore decides to talk to him because she knows he will stay. Curley’s wife is only trying to find someone who will pay attention to her whether it is someone she really wants to talk to or not.

The fact that she goes around searching for anyone makes her look desperate yet no one realizes that she is in desperate need of feeling wanted. In Steinbeck’s Curley’s wife is never called by her name. This symbolizes how she is treated, as if she is worthless and unintelligent.

This also shows that men treated women worse than their pets. Men acted towards women as if they owned them. This is evident when we look at Curley’s wife because it shows why she feels insignificant.

Instead of calling Curley’s wife by her name they say “Curley’s woman”, “a tart” , “the new kid”, etc. If men talked to her more and started calling her by her name Curley’s wife wouldn’t flirt as much and would feel way more valuable than she did. In conclusion, even though people don’t see that Curley’s wife has more to her than being a flirt, she only wants attention, and grabs it when she has the chance.

Of Mice and Men: Character Analysis on Curley's Wife. (2020, Jun 02). Retrieved from https://studymoose.com/mice-men-character-analysis-curleys-wife-new-essay 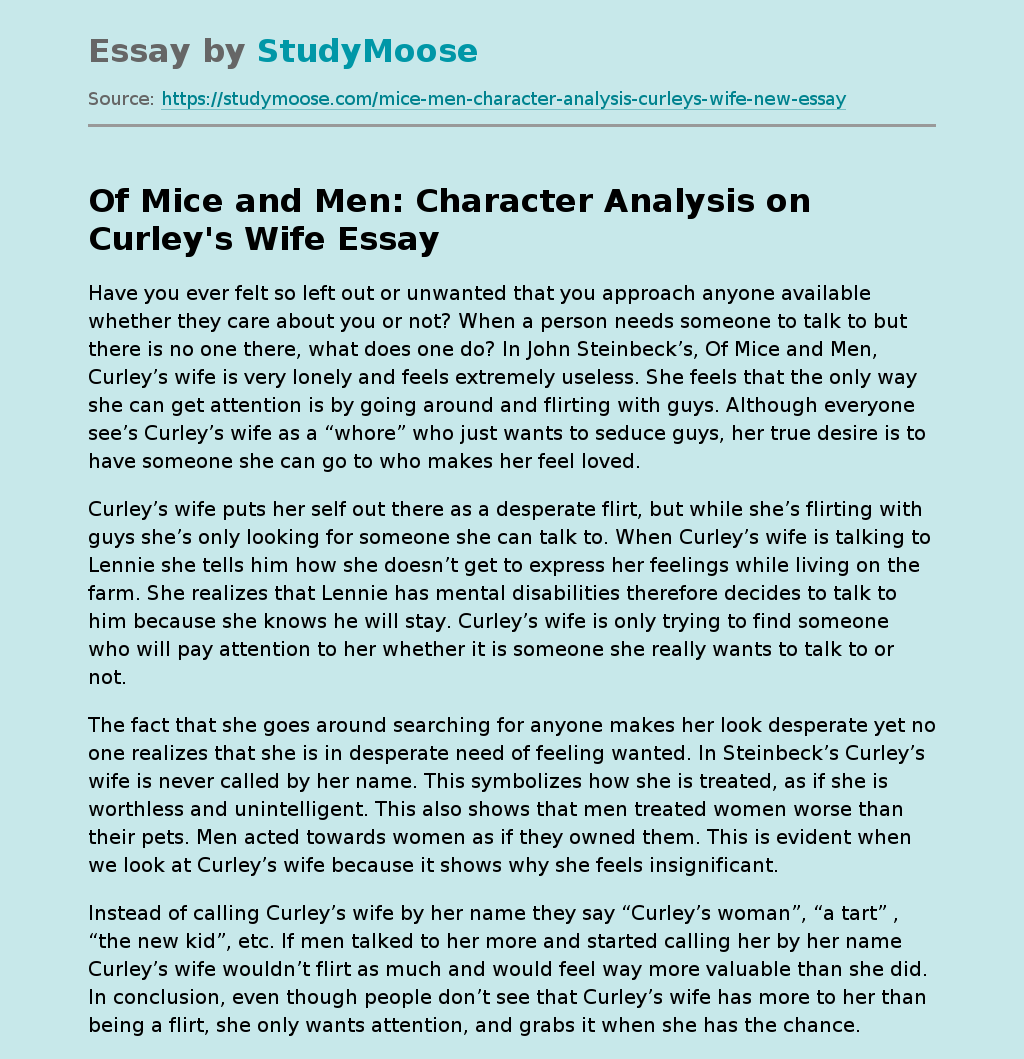