How Does Steinbeck Presents Curley's Wife in of Mice and Men?

Curley’s wife is a significant personality in the novel. John Steinbeck presents her in different ways during the novel and uses different methods to influence the reader’s judgement, for instance through her look, as she is a complex character. Significantly Steinbeck makes it clear that nurture turns her into the person she is in the novel, her nature is different. He uses language to show us who she is as revealed by colour and light symbolism; incongruity of her appearance and the setting; simile.

Turn in your highest-quality paper
Get a qualified writer to help you with
“ How Does Steinbeck Presents Curley’s Wife in of Mice and Men? ”
Get high-quality paper
NEW! AI matching with writer

For the majority of the book she is labelled in a negative way as a treacherous, kittenish character which could be interpreted as a replication of the way civilization observed the character of women in the novel. Sometimes, Steinbeck includes thoughts denouncing Curley’s wife. He also points out some of her good qualities. Due to this, readers can interpret for themselves if Steinbeck thinks highly of her, or if he does not like her.

Nevertheless later in the book Steinbeck deploys the reader into seeing her as complex, and feeling consideration for Curley’s wife; revealing her as a victim, anxious and secluded in a man’s world.

Although he may go back and forth on Curley’s wife, in the end, Steinbeck is mainly condemning her. Steinbeck explores her as attractive towards man through her beauty and an attention seeker. In the passage the first words that Steinbeck uses are that “Both men glanced up,” and through this we are introduced to Curley’s wife through her effect on men and not through any notion of herself, which Steinbeck does to show us she is only worthy for the use of men.

The word glanced up shows that she want men to look at her for she is has the beauty of an actress.

Not extended moment when Steinbeck exaggerates “the rectangle of sunshine in the doorway way cut off. ” Here, Steinbeck uses the light symbolically to highlight how imposing she is and present the idea that she is the obstacle to a better life. The image of Curley’s wife casting a shadow across the bunkhouse hints at trouble to come later in the novel. It soon becomes apparent that Curley’s wife is an outsider of the group when it states, “A girl was standing there looking in,” hence is a metaphor for the segregation she senses.

Therefore Steinbeck presents Curley’s Wife in “Of Mice and Men” as someone who is very eye-catching and courtesy inquirer. On the other hand, he portrays her as isolated and discriminated by men as she is excluded for being female, which sometimes lead to violence. This is illustrated when she is called ‘tart’, ‘jailbait’, and ‘bitch’ by the men on the ranch; henceforth the ranch is a very hostile and misogynistic place. Curley’s Wife is an outsider and seems very out of place.

She is frequently found in examine for companionship on the ranch as her recently found marriage does not give her the warmth she desires, as she states to Lennie “I don’t like Curley he aint a nice fella,” and due to this she often tries to cooperate with the other men although she is never allowed as they think a “ranch aint no place for a girl. ” Carlson also states of how a “women should be at home where she belongs. ” The fact that she is excluded from a place of physical work is symptomatic of how women were exposed during the 1930’s. They were not predictable to do work, but in its place stay at home and raise a family.

Curley’ wife feels apprehensive because of the solitude she feels and it is made clear she is exasperated with this condition, “none of them care how I gotta live. ” Nonetheless, the reader is presented with a side to an apparently playful and occasionally vindictive character. In chapter 5, Steinbeck permits Curley’s Wife’s character to eloquent emotions of loneliness, “I get lonely” and “I get awful lonely”. The use of repetition is used to give emphasis to the remoteness and frustration of not being able to talk to “nobody but Curley”, her hindrance which incessantly exteriors as she speaks to Lennie.

Moreover, for the period of the scene Steinbeck describes as such “And then her words tumbled out in a passion of communication, as though she hurried before her listener could be taken away”. The word “tumbled” recommends her frantic need to communicate to people, at the same time as the expression “passion” demonstrates her authority and strength needed to interconnect. Yet, what is predominantly conspicuous is she is used to people walking away from her when she speaks, this generates such consideration for her.

In this chapter she is also presented as a moderate and approachable character, as Steinbeck describes “she consoled him. ‘Don’t you worry any’ […] she moved closer to him and spoke soothingly. ” The fact that she spoke “soothingly” suggests that she has a kind nature, and asked in a maternal way when Lennie needed such gentleness. The reader can then relate this sudden behaviour transformation and her upcoming, but the syrupiness she bounces off blurs the reader’s sight to floral it. All the way through the novel as similar to Crooks, Curley’s Wife is not named.

This highlights her lack of identity on the ranch and how she is viewed as the property of her husband as well as the word “live” indicates that she also is a living human being who wants to fulfil her dreams and desires but it would be impossible for her. As a result of her insecurities, she tries to combat her loneliness and sequestration by resorting to violence. Her vicious attacks on Crooks to getting him “strung up on a tree” and the attacks on Lennie due to his mental disability show how loneliness can not only change a person, but destroy them.

All of the emotions Curley’s Wife encounters come as a result of the loneliness she feels, and these clearly represent of what a terrifying character she is. Therefore Steinbeck describes Curley’s wife as isolated and discriminate due to her gender of a female throughout the novel. Equally, at the end of the novel, she is presented as innocent and purified from all the trouble through the description of her appearance. This can be seen in chapter 6 when Steinbeck explains “Curley’s wife lay with a half-covering of yellow hay. And the meanness and the plannings and the discontent and the ache for attention were all gone from her face.

She was very pretty and simple, and her face was sweet and young. Now her rouged cheeks and her reddened lips made her seem alive and sleeping very lightly. The curls, tiny little sausages, were spread on the hay behind her head, and her lips were parted. As happens sometimes, a moment settled and hovered and remained for much more than a moment. And sound stopped and movement stopped for much, much more than a moment. ” From this passage, the reader can acknowledge the real Curley’s wife but at the same time feel sorry for her as her dream was unfulfilled.

The phrase “meanness (… ) plannings (…) discontent (…) were all gone from her face” shows that she is no longer vicious and dangerous as all the negativity vanished. Most importantly the phrase “roughed cheeks and reddened lips” conveys that her dream is unfulfilled and the repetition of “stopped” to emphasise stillness and the feelings of time standing still. Therefore Steinbeck does not present her as a negative character, but at the time of her death he shows the reader the real her as it was not her nature but nurture that made her what she was.

In contrast Curley’s Wife at first is portrayed as a revolting unpleasant woman. Curley’s Wife is described by Steinbeck many times as “roughed lips and wide-spaced eyes. Her fingernails were red. ” this causes the reader to think of her as he says so. Nonetheless, despite these brutal views of her, the reader is presented with a side to a seemingly flirtatious and sometimes malevolent character. The repetition of the colour “red” denotes the fact that she is very dangerous and cause lot of trouble as the colour red is frequently associated to blood and murder which foreshadows the scenes later on in the novel.

An alternative interpretation could be that red is also represent as the colour of love and she is wanting to be love, but many readers would link it to her actress personality as most actress love to dress a lot. Not so long, Steinbeck describes her hair as “her hair hung in little rolled clusters, like sausages,” and this simile shocks the reader because sausages are disliked and filthy, so linking it to her means that she is also disliked. Furthermore as sausages do not match with hair, the same way she is not suitable for a place like the ranch.

Therefore Steinbeck portrays Curley’s wife as a woman who is dangerous and disliked by linking her with words that supports the point. John Steinbeck points out many flaws in Curley’s wife. For example, he does this when he writes, “she leaned against the door frame so that her body was thrown forward” (Page 51). In this statement, Steinbeck is pointing out that Curley’s wife always tries to instigate something. He also describes her body image and how provocative she is, always looking for attention. Steinbeck says many more things to condemn Curley’s wife, but that is not all that he says about her.

Steinbeck also defends Curley’s wife. He writes of how lonely she is, and describes her as innocent as the rabbits and puppy killed by another character, Lennie. For instance, Curley’s wife says, “Think I don’t want to talk to somebody ever’ once in a while? Think I like to stick in that house alla time? ”(Page 77). In this statement, Curley’s wife implies that she is tired of being lonely and wants to talk to other people. As much as Steinbeck appears to flip-flop on his view of Curley’s wife, readers can draw different conclusions.

How Does Steinbeck Presents Curley's Wife in of Mice and Men?. (2016, Nov 20). Retrieved from https://studymoose.com/how-does-steinbeck-presents-curleys-wife-in-of-mice-and-men-essay 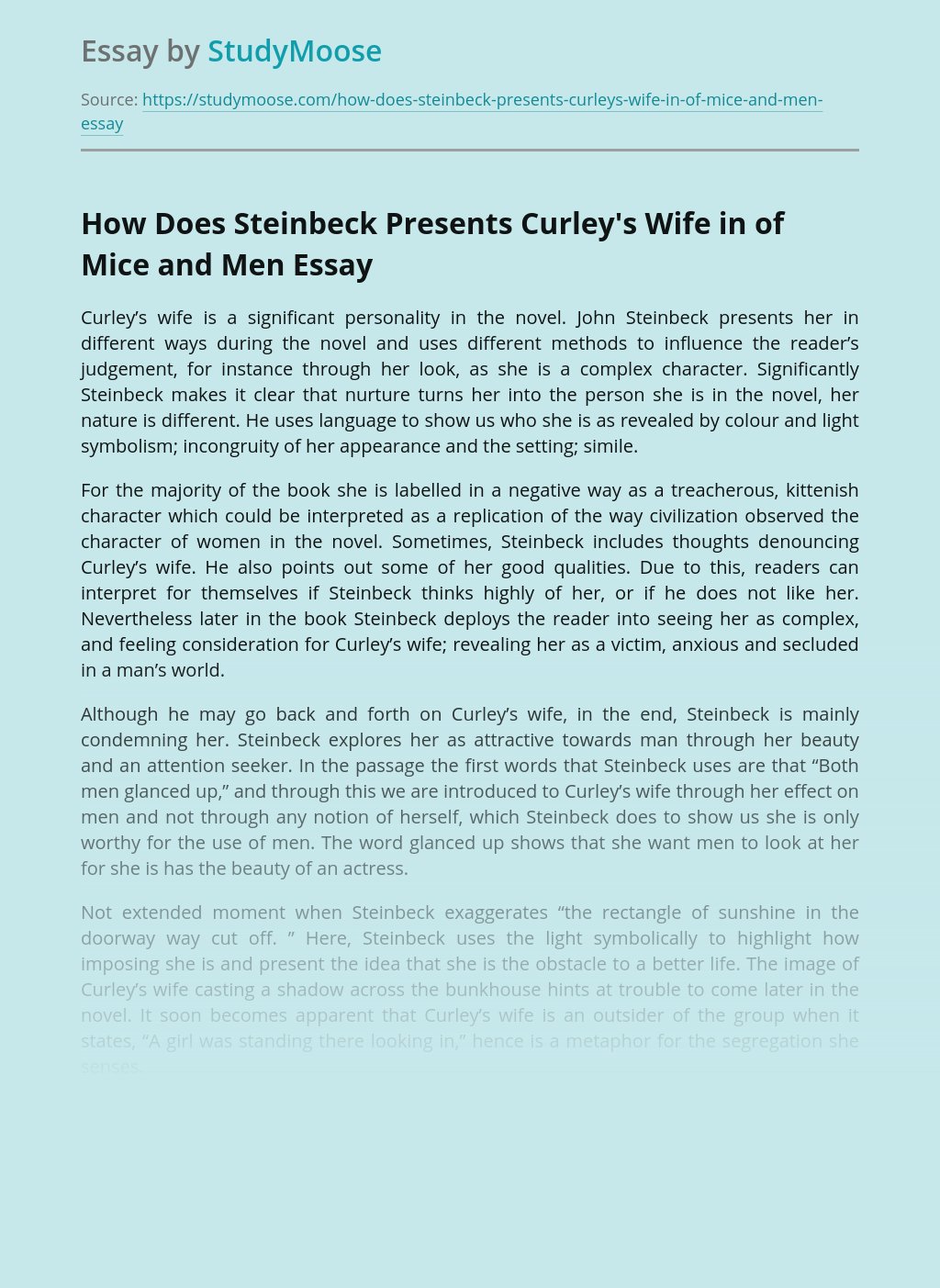 Turn in your highest-quality paper
Get a qualified writer to help you with
“ How Does Steinbeck Presents Curley’s Wife in of Mice and Men? ”
Get high-quality paper
Helping students since 2015
Stay Safe, Stay Original