How does Curleys Wife appear to be weak In Of Mice and Men and how does she manipulate her power?

Power has an important role to play in Steinbeck’s ‘Of Mice and Men’ throughout the whole novel. Power is displayed through authority, wealth, control, strength, and status – and the quantities of these that each character possesses determines their place in the hierarchy of power in the novel. Curley’s Wife is considered one of the weak ones, because of a lack of some of these attributes.

The most obvious evidence that gives this point substance is her name – Curley’s Wife.

Don't use plagiarized sources. Get your custom essay on
“ How does Curleys Wife appear to be weak In Of Mice and Men and how does she manipulate her power? ”
Get custom paper
NEW! smart matching with writer

This directly shows her status in society, and how her authority is affected by her husband. She is not given her own name in the novel, instead taking Curley’s name – becoming a sort of extension of Curley. She is not independent, as she does not have her own separate name, and shows that her position of authority is lower than Curley’s – he is the dominant one.

Her status is lower than Curley’s because she does not have her own separate title, and gets objectified towards Curley – she is “Curley’s” rather than her own self.

Due to the context of the time, being a woman gave you a lower social status than men – many were seen as second rate to their male equivalents. They had less power than men, this was displayed through having less rights, particularly when it came to democracy and voting – less control. She was confined by her social status as a woman. This makes her level of power in the novel significantly lower than Curley’s – adding to the idea that she is presented as one of the weak ones.

Despite her social status as a white woman, she manages to manipulate her position over others that she deems weaker than her. Although she is a woman, she is a white American, and this means that automatically she has a social power over the black population – in the context of time and due to racism this was widely accepted. A clear example of this is given by Steinbeck when she tries to talk with Candy, Crooks, and Lennie in Crook’s room. She is not wanted by any of those three characters, and Crooks, filled with hope about the dream farm that they had been discussing, turns to her and says that he would ‘ast the boss not to ever let you come in the barn no more’.

Curley’s Wife takes advantage that her social role is higher up in terms of power compared to Crooks, simply because she is a ‘white woman.’ She says that she could get Crooks ‘strung up on a tree so easy it ain’t even funny.’ This is a threat towards Crooks, and it is a threat that carries weight because it has happened before and could happen to Crooks. Crooks reduces himself ‘into nothing’ and had ‘no personality, no ego-nothing to arouse either like or dislike’. He shrivels back so much and this shows the extent to which Curley’s wife can manipulate her power. Although out of the characters introduced to the reader in Of Mice and Men she appears to be one of the weak ones, because of the social hierarchy that existed in 1920’s America, she is able to exert her power over a select group of people – namely Crooks and all black people.

Although Candy is theoretically more powerful than her simply because his social status as a white man at that time was considered more powerful than a white woman. But Curley’s Wife manipulates Candy’s physical weakness, and calls him a ‘lousy ol’ sheep’ and the whole group of them ‘bindle stiffs.’ She is prepared to talk to them in such a way that she’s sure that they wouldn’t be able to properly retaliate. At the beginning of her entrance she says that Crook’s room is where they left all the ‘weak ones’ – evidence for this point.

Out of all the characters introduced to the reader in Of Mice and Men Curley’s Wife appears to be one of the weak ones, because of the social hierarchy that existed in 1920’s America. However, she is able to exert her power over a select group of people – namely Crooks and all black people because of her role in society – a white female.

How does Curleys Wife appear to be weak In Of Mice and Men and how does she manipulate her power?. (2017, Nov 06). Retrieved from https://studymoose.com/how-does-curleys-wife-appear-to-be-weak-in-of-mice-and-men-and-how-does-she-manipulate-her-power-essay 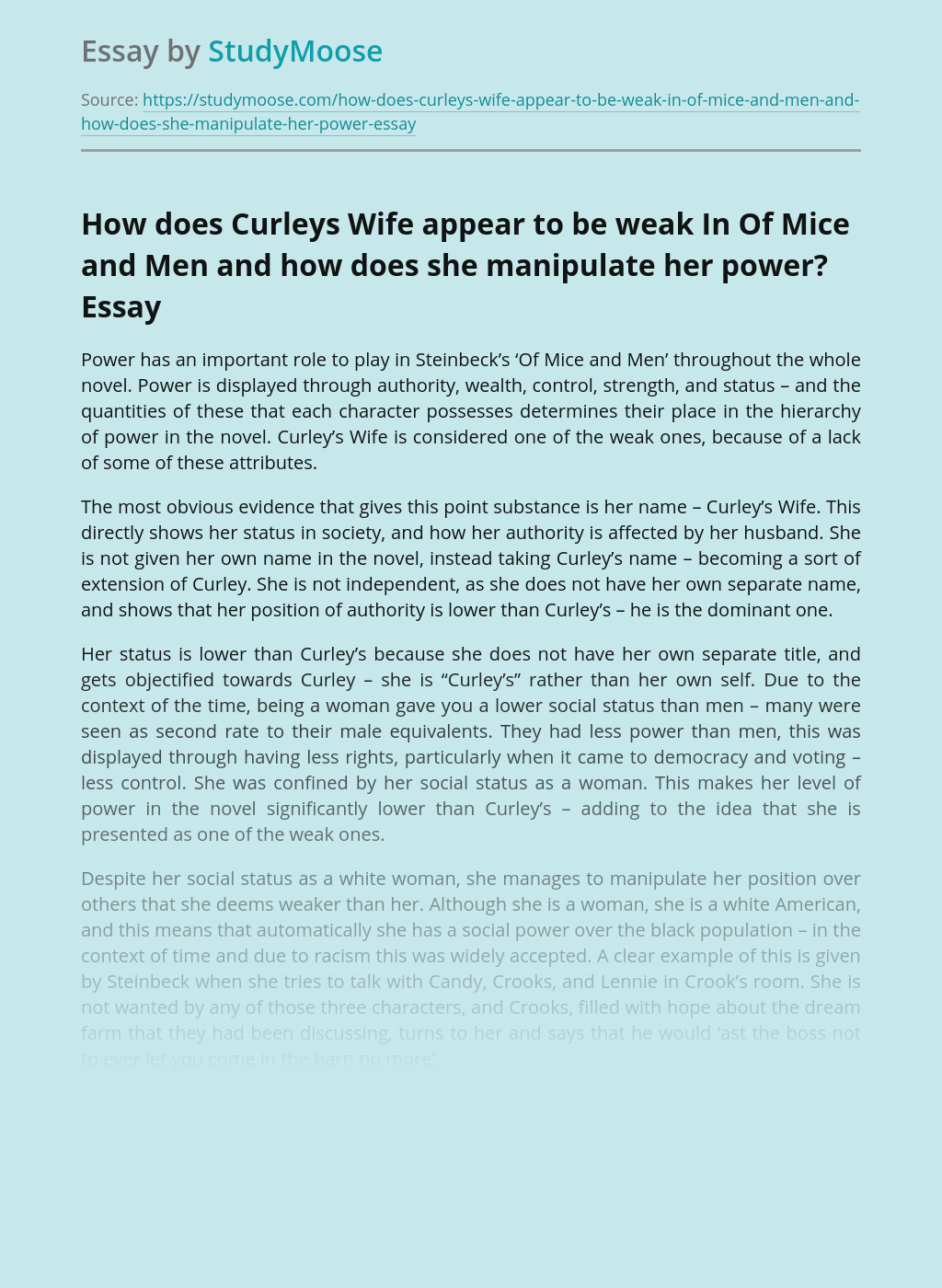