Curley in Of Mice and Men

Categories Of Mice And Men

Curley is the son of the ranch boss. He is portrayed as a small, semi-privileged man with a very short temper and something of an inferiority complex. He is always itching for a scuffle and is constantly seeking the opportunity to prove himself on the ranch among other bigger, “better” men. From the moment we are introduced to Curley we discover this, due to the way in which he acts when he meets George and Lennie, “His eyes passed over the new men and he stopped.

He glanced coldly at George and then at Lennie. His arms gradually bent at the elbows and his hands closed into fists. He stiffened and went into a slight crouch. ” This illustrates that he is not mentally secure about himself, and quickly goes into a poised posture as if he is willing to lash out on the two new men to prove his manliness and authority. After a deliberately elongated stare down, Curley speaks but in short menacing sentences.

“You the new guys the old man was waitin’ for? And when George is the only one to reply he quickly retorts in a provocative manner “Let the big guy talk” Once again this justifies the fact that Curley is insecure and is always trying to prove himself as the alpha male on the ranch, so he tries doing so by badmouthing Lennie as he feels that by doing so he will be regarded as strong, manly and valiant. When Lennie refuses to speak the situation hastily increase due to Curley’s short temper.

Unlike most other characters in the story Curley is probably the only one that does not develop much over the course of the book but he stands out as a character with whom the author simply does not sympathize. While everyone else is struggling, Curley’s busy picking fights and trying to throw his weight around his dad’s ranch. He seems outside of the economic struggle and even the personal struggle of the Depression. Curley’s the kind of jerk you need in contrast to the other characters, so he maintains this “bad” reputation with the reader from the beginning right to the end.

The next encounter with Curley is in chapter 3 when all the men are in the bunkhouse. Curley is clearly frustrated and agitated by the fact that he can’t find his wife, a sign of weakness and lack of authority, and when he is told that Slim is at the barn he rushes out and starts interrogating him but when Slim shows that he is in control, Curley’s fake ego is quickly shattered and it is obvious that he is quickly forced back into his place. “Well, I didn’t mean nothing, Slim. I just ast you. ”

But Curley being the short fused jerk hat he is could not just leave it there and in a matter of seconds he is all up on Lennie punching him in the face. He did this because he evidently lost the argument with Slim and knowing Lennie’s friendly, unaggressive nature finds him the best solution to blow of some steam, as well as prove his dominance by overpowering a huge, defenseless man. But once Lennie retaliates and breaks Curley’s puny hand he finally realizes that he has lost twice and he should just leave it there. Our final encounter with Curley is when his wife is killed by Lennie.

It is apparent that he does not care about the death of his wife and is simply too absorbed into his own world were only he and his reputation matter. “Curley- maybe you better stay here with your wife” “I’m goin, I’m gonna shoot the guts out of the big bastard myself” This shows that the death of his wife is not very significant, but gaining fame and revenge by shooting the man that killed her would seem far more favorable, it would certainly be more manly than staying back and weeping over a dead female.

Curley in Of Mice and Men. (2017, Jan 03). Retrieved from https://studymoose.com/curley-in-of-mice-an-men-essay 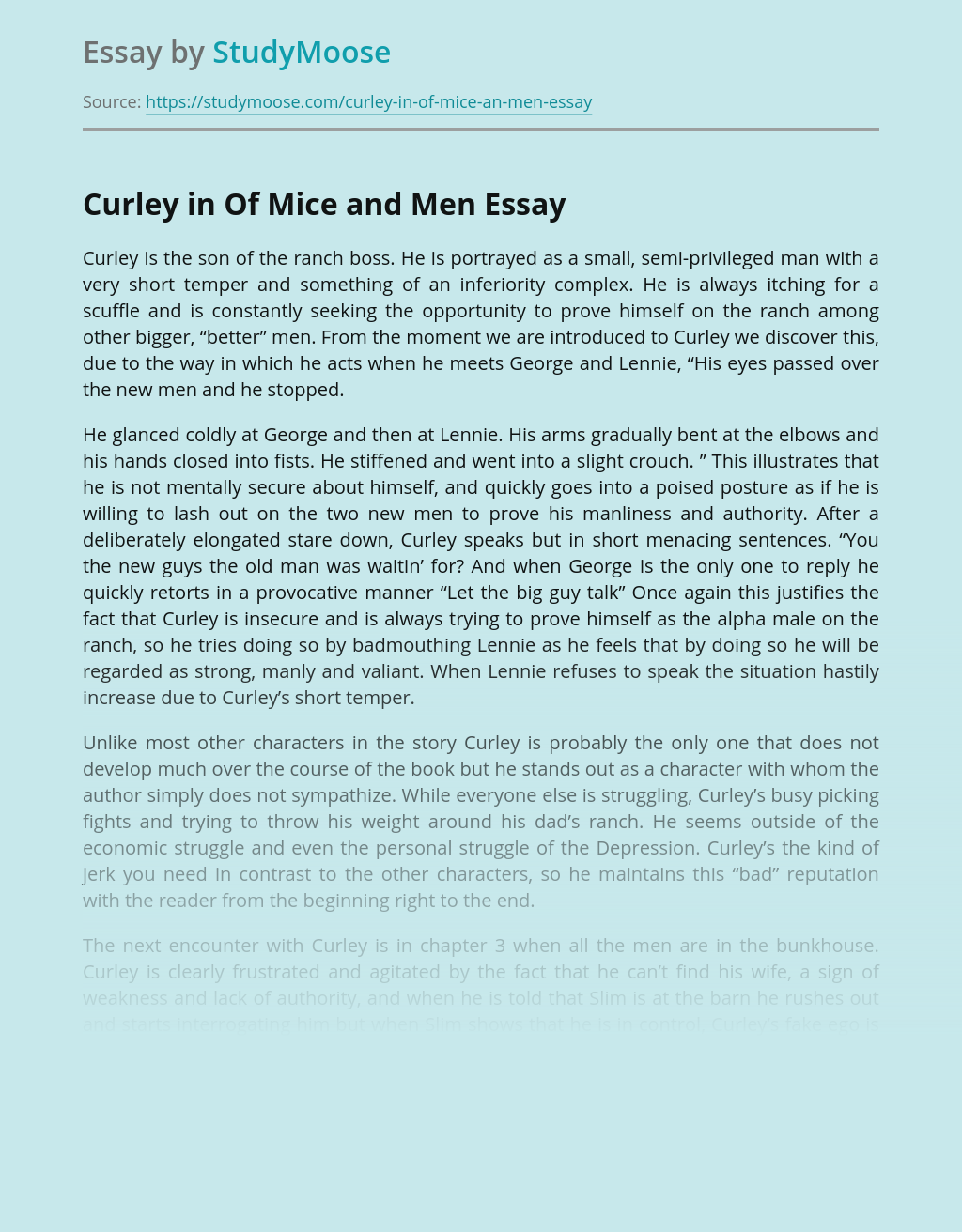 Get Essay
Prejudice in "Of Mice and Men"

“Prejudices are the chains forged by ignorance to keep men apart.” – Marguerite Gardiner. In society, both modern and in the past, prejudice has been a tool of thinking and labeling a group of race, people, class and culture in order to distinguish ones superiority and dominance from one another, but is simply a way...

Of Mice and Men - Friendship

John Steinbeck shows how important a friendship is and how much two people can support each other to survive. Take this bond away and it will create a difficult and almost impossible journey for the two men in this novel. John Steinbeck portrays Lennie and George as having the greatest friendship in the world and...

George and Lennie's Relationship in Of Mice and Men

Of Mice and Men is a novella centred on the disincentives of America during the depression in the 1930’s. The country known as ‘the land of opportunity,’ is dismissed as it became deprived and inept. Many men were itinerant workers that travelled from ranch to ranch looking for wages that would be sufficient till they...

Of Mice and Men essay: The issue of racism

Racism features strongly in the novel Of Mice and Men by John Steinbeck. I think Steinbeck manages to sum up every thing that was wrong with racism and American culture of the time, whilst keeping his views to himself. Steinbeck decided not to write either for or against racism, he just gave you a few...

Of Mice and Men - Did George have any alternative than to shoot Lennie?

Of Mice and Men tells the story of two men, George and Lennie, who seem to be uncannily paired in a society of loners. Lennie is very tall, and very muscular with massive strength, but also appears to have a major learning handicap. George is shorter, and far less strong, but has the greater intelligence...

The novel is called ‘Of mice & men’ because things can go wrong between a small mouse to an important human being. Thing can go wrong despite how hard you try. There are two characters in this novel that I think are portrayed as being weak. One of the characters that I feel comes across...