How Are the Themes of Loneliness and Isolation Explored in “of Mice and Men”?

Don't use plagiarized sources. Get your custom essay on
“ How Are the Themes of Loneliness and Isolation Explored in “of Mice and Men”? ”
Get custom paper
NEW! smart matching with writer

Gender is one way in which Steinbeck illustrates loneliness and isolation.

The character of Curley’s wife is used to portray this. Throughout the book Curley’s wife is never referred to her name which is unknown. This suggests that she is a possession belonging to Curley. By not having her name mentioned; Curley’s wife remains distant even though she tells Lennie her life story as without a name she remains mysterious. Her marriage to Curley causes for her to be rejected by the ranch workers when she seeks out their attention and friendship.

Therefore she is not only lonely but also isolated as there are only men on the ranch who turn away from her.

Critics may argue that Steinbeck was too harsh in not giving a name to Curley’s wife but in my opinion John Steinbeck was only portraying the reality of that particular time period. Steinbeck also uses age to explore the themes of loneliness and isolation. Candy, an old ranch worker, is used to display these themes.

As the oldest man on the ranch Candy is the most insecure of the men as he knows that if he was to be fired from his job he would have no other place to go to, what with having no family or friends. This knowledge isolates him from the others as there’s no one whom he can relate to this about.

Critics may say that John Steinbeck is stereotyping old people as useless. Another way in which the two themes are explored is through racism. For this John Steinbeck uses Crooks. As a stable buck and a black person, Crooks is isolated from the other characters. He has his own room which may be fortunate but only further alienates him from the other workers. Crooks shows that he is lonely while talking to Lennie, he says, “I tell ya a guy gets too lonely an’ he gets sick. ” He talks of how he wakes up in the night and sees something but doesn’t know if he was just dreaming, if had a friend he would have asked him.

Because of his race Crooks has many disadvantages one of them being that he is not allowed to enter the bunkhouse. Another being that he is abused by the other workers. Crooks is not given a chance to befriend anyone and is therefore both physically and mentally isolated. Lennie shows how disability can lead to loneliness and isolation. His child-like mentality distances him from the other workers. Though he talks to and is talked to by other characters he is isolated in his mind because there is still a separation. His disability causes the other characters on the ranch to treat him as inferior.

Lennie was told both Crooks’ and Curley’s wife’s life story but it doesn’t mention in the book whether or not he was really listening when the two confided in him. This makes you doubt whether or not Lennie is actually as he is described. Critics may say that Lennie’s character was too unrealistic and overdrawn. Euthanasia is used to explore the themes of loneliness and isolation. Again Lennie is used to display this along with Candy’s dog. Both of them were in a similar situation where their death was what was best for them. Throughout the book Lennie is described as animalistic which further connects him to Candy’s dog.

Lennie was killed by someone who cared about him, George, while Candy had wished to have been the one who had killed his dog. Without his dog Candy was left as lonely because though he still had the others, his dog was the one who was always by his side. It shows that Lennie was truly lonely because when he died though George was shaken he had Slim as a friend to replace Lennie. John Steinbeck uses dreams to show loneliness and isolation. George’s character is used to show this. Although most of the ranch workers like George, he is mentally isolated. This is because of his dream which distances him from the other characters.

His dream acts as a burden because in the end he knows that it will never come true. His awareness causes for him to be isolated, lonely and unreachable. Financial status also displays loneliness and isolation. For this the character of Curley is used. Curley can be viewed as the villain in the novel because of the abusive way he treats the other workers. He uses his small size as an advantage. The main difference though between him and the workers is money. Curley is married and yet because he is the boss’s son he doesn’t have to work like the others characters do.

He uses the fact that he has authority and dominates the ranch workers. But being the boss’ son only further alienates him from the other characters and causes him to be lonely. Curley’s wife would constantly flirt with the other ranch-hands. This made him a subject of ridicule and further isolated him. Another way in which John Steinbeck uses to explore the themes of loneliness and isolation is through marriage. Curley and his wife are used to depict this. Both of them are stuck in a loveless marriage. Curley’s wife revealed to Lennie that she didn’t like Curley.

Ways that you can tell Curley doesn’t love his wife is like the fact that he went to a cat house with the other men. In addition, when his wife was killed he set out to punish Lennie instead of mourning her; this shows that he was more interested in getting back at Lennie for personal reasons instead of losing his wife. Curley and his wife are therefore viewed as lonely. Their title as a married couple also isolates them from others on the ranch as there are expectations of how they should act and who they should talk to. Friendship is used by John Steinbeck to display loneliness and isolation.

There are many forms of friendship in “Of Mice and Men”, the main one being George and Lennie’s friendship. The two of them are dependent on one another for different reasons. Lennie needs George to help him because of his mental disability. While George needs Lennie for company. Critics may argue that Steinbeck showed their friendship as abusive and forced. Another friendship brought together by loneliness is Curley’s wife and Lennie. This shows that they were all lonely as they settled for each other purely because they wanted companionship and someone to talk to. John Steinbeck also used other features to display loneliness and isolation.

The novel began with a lonely atmosphere as he described the setting. This indicated that there was no-one around to describe or mention which gave you the feeling of isolation. Also the name of the city, Soledad, means solitude and loneliness in Spanish. In conclusion, John Steinbeck explored the themes of loneliness and isolation in many ways, using other themes and features. Although Steinbeck doesn’t allow you to clearly see his characters so you are unable to discern whether they are really lonely and isolated or if they are just portrayed and viewed as lonely and isolated.

How Are the Themes of Loneliness and Isolation Explored in “of Mice and Men”?. (2018, Aug 23). Retrieved from http://studymoose.com/how-are-the-themes-of-loneliness-and-isolation-explored-in-of-mice-and-men-essay 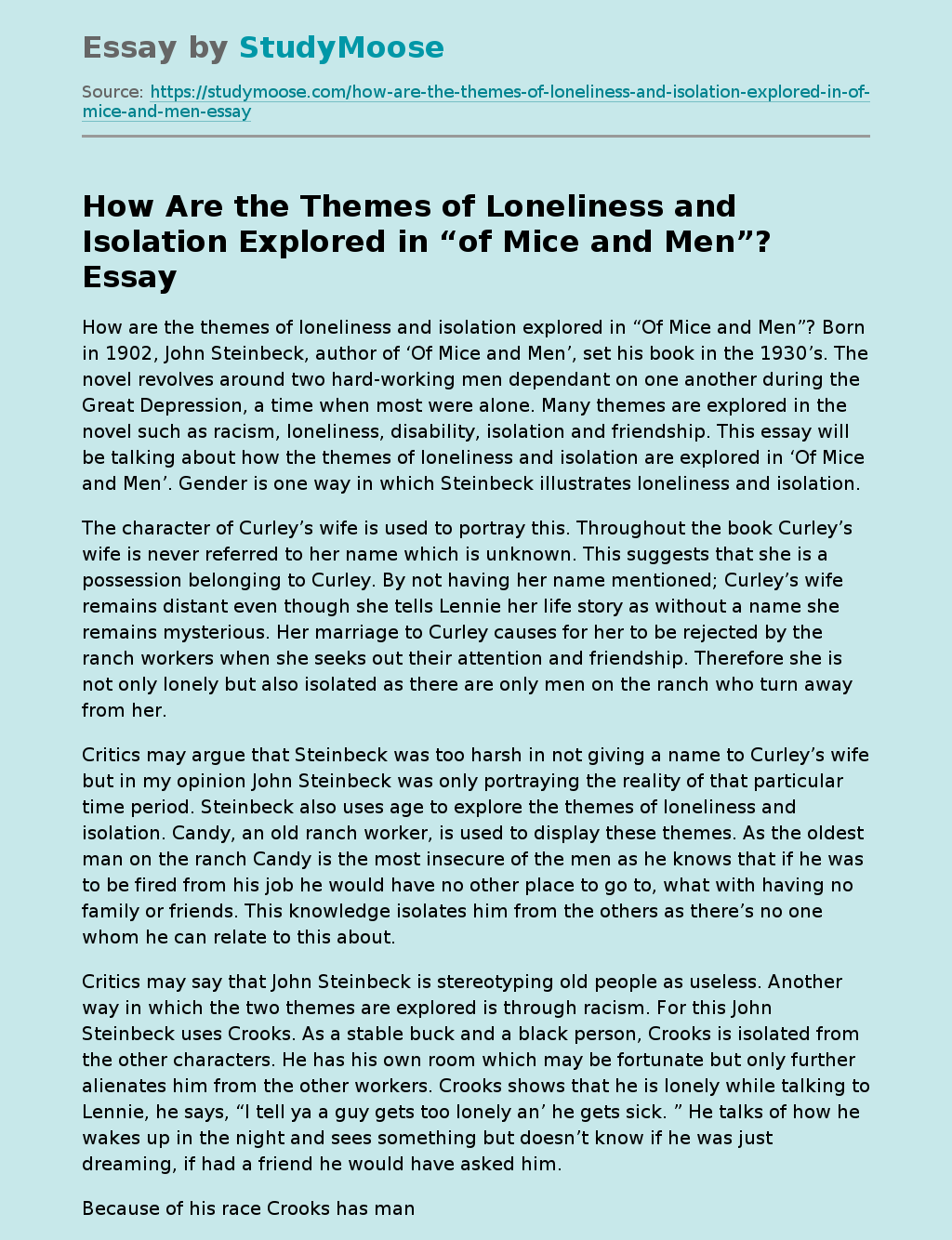