Of Mice and Men Loneliness

The characters Candy, Crooks, and Curley’s Wife all exemplify loneliness and isolation. By creating and describing these characters, Steinbeck is showing the reader symbolism in the characteristics of these three characters and how it can alter the story and the characters in it.

Candy demonstrates the theme of loneliness throughout the whole novella. By the way he acts towards other characters in the novella. For example, he was only close to his dog before he met George and Lennie and he was so eager to meet them and make friends.

Don't use plagiarized sources. Get your custom essay on
“ Of Mice and Men Loneliness ”
Get custom paper
NEW! smart matching with writer

Additionally, Candy looks desperate when the outlook of being part of Lennie and George’s dream of the small farm comes up, he says, “And they give me two hundred and fifty dollars ’cause I lost my hand. An’ I got fifty more saved up right in the bank right now.

That’s three hundred…” This shows he’s willing to give every cent to join up with them and their dream and loneliness has made him desperate.

Candy also had a close relationship with his dog. After his dog was shot, it was almost described as if it was Candy that got shot. As the dog was being executed, Candy laid in bed and stayed silent. The dog and its weakness is a symbolism Steinbeck used to compare to Candy and his missing hand. Candy’s loneliness affects George and Lennie and alters the dream to a three man thing instead of just George and Lennie.

Crooks the stable buck is a primary example of loneliness in this novella.

Discrimination towards Crooks turns him into an aloof, distant, and lonely man. The men on the ranch isolate and taunt Crooks. For example, when Lennie walks in Crooks room Crooks says, “You got no right to come in my room. This here’s my room. Nobody got any right in here but me.” Crooks is isolating himself from everyone including Lennie and wants to be aloof. He also states, “S’pose you didn’t have nobody.

S’pose you couldn’t go into the bunk house and play rummy ’cause you was black. How’d you like that? S’pose you had to sit out here an’ read books. Sure you could play horseshoes till it got dark, but then you got to read books. Books ain’t no good. A guy needs somebody-to be near him. A guy goes nuts if he ain’t got nobody. Don’t make no difference who the guy is, long’s he’s with you. I tell ya, I tell ya a guy gets too lonely an’ he gets sick.” Here Crooks expresses his loneliness and how he is an outcast to the rest of the workers on the ranch. His loneliness is formed from discrimination of his African American skin color.

Portrayed by Curley, Curley’s Wife is the loneliest character on the ranch that even Steinbeck doesn’t give her a name. She is that unimportant and uninteresting compared to the rest of the characters in the novella. Sneaking around and bothering everyone and seeking attention, causing trouble around the ranch, and overall she is unwanted by the workers on the ranch. In the novella, she states that she is lonely right before her death. She states these quotes to Lennie, “I never get to talk to nobody. I get awful lonely.”, “What’s the matter with me? Ain’t I got a right to talk to nobody?”, and “Seems like they ain’t none of them cares how I gotta live.”

Of Mice and Men Loneliness. (2016, Oct 12). Retrieved from http://studymoose.com/of-mice-and-men-loneliness-essay 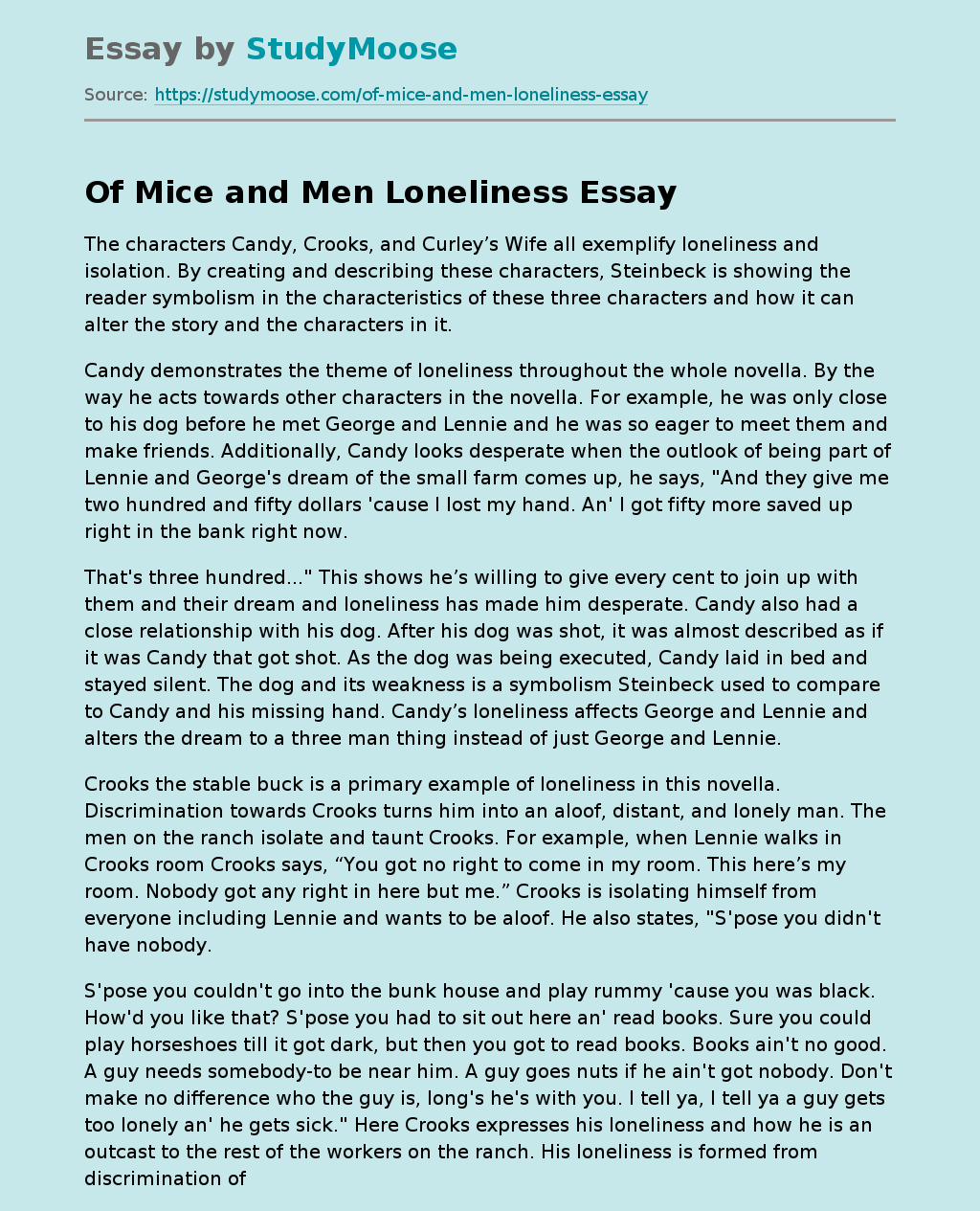