How does Steinbeck present loneliness in ‘of mice and men’?

How does Steinbeck present loneliness in ‘of mice and men’? During the Great Depression in the 1930s in the USA many migrant workers went to California in search of work. In the novel “Of Mice and Men” John Steinbeck deals with the loneliness which affected these characters. One of the main symbols of this, is the setting of the novel is in Soledad, which translated from Spanish means solitude. Steinbeck point to the cause of loneliness being from discrimination, and the loneliest person on the working ranch would likely be the black stable buck “Crooks”, this is proved by his actions and his attempts to make friends.

Don't use plagiarized sources.
Get Your Custom Essay on How does Steinbeck present loneliness in ‘of mice and men’? Just from $13,9/Page

You first understand him when he expresses his loneliness to Lennie, “a guy goes nuts if he ain’t got nobody.

Don’t make no difference who the guy is, long’s he’s with you. I tell ya a guy gets too lonely an’ he gets sick”. (page 82) This indicates he has become mentally ill due to his extreme loneliness in his room.

As an African American he is not allowed into the bunk house or to play cards with the white ranchers. Crooks tells Lennie it is “Cause I’m black. They play cards in there, but I can’t play because I’m black. They say I stink. Well I tell you, you all of you stink to me.” (page 77) This shows that he longs to join them in playing cards and feels bitter and angry that he can’t. This was a very racist time in America.

Crooks was the only black person on the ranch and there was only one other black family in the area. As Crooks says “If I say something it is just a nigger sayin’ it.” (page 80) Crooks at first turns Lennie away from his room saying “you got no right to come in my room.” (page 77) but due to Lennie’s ‘disarming smile’ (page 77) he gives in and invites him in. When Crooks realises about the dream of the farm he wants to be part of it, offering to work for nothing. “If you…guys would want a hand to work for nothing – just his keep, why I’d come an’ lend a hand. I ain’t so crippled I can’t work like a son-of-a-bitch if I want to.” (page 86) This shows how desperate Crooks is to overcome his loneliness and be part of something.

However, this dream is stopped by Curley’s wife who threatens to accuse of him of rape so that he will be hung. She reminds him that everyone will believe her saying “Well, you keep your place then, Nigger. I could get you strung up on a tree so easy it ain’t even funny.” (page 91) This makes Crooks remember that he is not able to be anything else and that the dream is futile. He returns to being angry and bitter. Steinbeck does not offer any solution to Crooks loneliness. He simply gives an observation on life and how lonely it can be for some people. He shows how racism can cause loneliness and isolation and this can cause people to be very bitter and angry.

How does Steinbeck present loneliness in ‘of mice and men’?. (2016, Apr 26). Retrieved from https://studymoose.com/how-does-steinbeck-present-loneliness-in-of-mice-and-men-essay 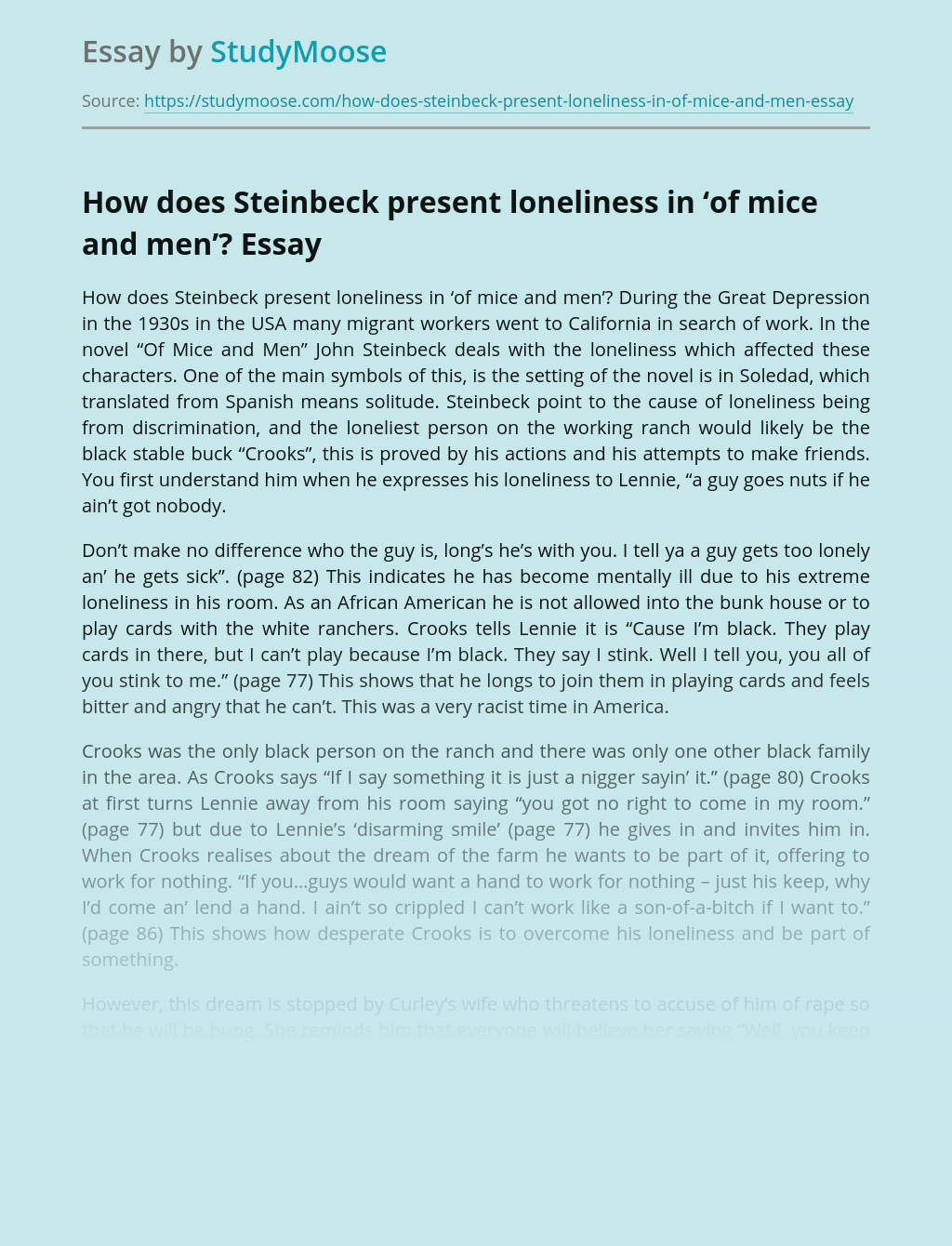 The Frontier People are born with a natural sense of curiosity. The need to discover helped them conquer the American frontier and today they continue to set their sights on new unknowns. The frontier can be defined as a place of lawlessness and chaos. In the case of the American West, the definition fits with what...

View sample
How does Steinbeck present loneliness in ‘of mice and men’?

How does Steinbeck present loneliness in ‘of mice and men’? During the Great Depression in the 1930s in the USA many migrant workers went to California in search of work. In the novel “Of Mice and Men” John Steinbeck deals with the loneliness which affected these characters. One of the main symbols of this, is...

Alice Munro’s “Walker Sibling’s Cowboy,” told from the point of view of girl, focuses on the storyteller’s initiation into a world that leaves her confused, uncertain of what she understands, how she has come to understand what she knows, and how steady her knowledge is of the world she moves in. This sense of confusion...

Inspired by his childhood in rural Arkansas in the 1950s, John Grisham narrates a fiction story in ‘A Painted House’ through the eyes of a seven year old, Luke Chandler, who lives with his parents and grandparents in a little house which had never been painted. The protagonist of the story, Luke Chandler is the...