The conclusions in John Steinbeck's "Of Mice and Men"

Don't use plagiarized sources. Get your custom essay on
“ The conclusions in John Steinbeck’s “Of Mice and Men” ”
Get custom paper
NEW! smart matching with writer

One conclusion which is implicitly expressed in Of Mice and Men’s introductions is that of the significance of a job in a person’s identity. This is particularly significance in the this Depression novel as during the Depression, the average American was identified not by their name but by the service they did to the country, and that meant what job they did. This can be seen several times during our introduction to the inhabitants of the ranch.

On page twenty one we see the first reference to Crooks, who remains unnamed until later on: “The stable buck’s a nigger”. This is a reference to his job, which gives him identity as the stable buck, even though unnamed at this point. This is also true of the boss, who remains nameless throughout the novel – his job is what gives him an identity “The boss stepped into the room” page twenty two. On page twenty five, Candy, unnamed at this point, is referred to as “the swamper” and this shows again that job gives one identity.

The most explicit example of a role giving one identity in the novel is Curley’s wife, who remains unnamed throughout the novel, like the boss, and it is clear that she had no identity before her marriage to Curley: she may have hoped, that by the marriage and gaining a form of identity she may achieve her dream of going to Hollywood. However, it is in Slim that we see that a job can give you not only identity, but also authority. Slim receives the longest description of any character in the novel (page thirty four/thirty five) and most of this passage describes his job. He is a “jerkline skinner” and was capable of “driving…20 mules in a single line” and “killing a fly…the mule” and these show that Slim’s authority is gained not only by the “majesty” in which he walked, but also because he was a valued worker and he had mastered his job, which was stable, unlike the other drifting ranch hands. Therefore, we can see that identity and authority in Of Mice and Men’s introductions reflects not only the conclusions of the novel but also the lifestyle of Americans during the Depression.

A conclusion about solitude can be drawn from the passages, that is, that people become “mean” or unhappy when they are alone, and this is relevant to this novel as George and Lennie are the only ones in the novel, apart from Candy and his dog, with a companion and this means that they are different from others and they have dreams and hope. This is shown in the introduction to death, that of Candy’s dog, where we see that George, Candy and Lennie, with each other, can plan setting up their own ranch (page fifty nine/page sixty one). As they have each other, we can also see that they know each other better than most people do, particularly in George and Lennie’s case. We see during the suspense filled moments before the killing the young ranch hand Whit, who talks about a man he used to work with called Bill Tenner: “Little guy…drove a cultivator” and this was the only detail about Bill they remembered, and they only knew him well enough to call him a “nice fella” and we can see this being repeated several times in the passage which introduces the ranch hands as well, with Candy referring to both the Boss and Crooks as a “nice fella”.

It is only Lennie and George who know each other well, and this allows them to pursue a dream together, and this is explained by Lennie in the first chapter, when George says that they are not like other men: “But not us! An’ why? Because…because I got you to look after me and you got me to look after you, and that’s why!” (page fifteen). This contrasts to Curley’s wife when we are introduced to her on page thirty two. She seems to be using her sexuality to attract men because she is lonely, and she thinks that companionship with another man would give her a path to her dream: “I bet she’d clear out for twenty bucks” (page thirty three), and therefore we can see that this conclusion of hope through companionship is evident in both the introduction to death and the introduction to the ranch hands.

One of the most evident conclusions which can be drawn from the introductions to Of Mice and Men is the inevitability of the failure of George and Lennie’s dream, and this represents how unlikely it seemed for the American dream to come true during the Depression. This can be seen with the introduction of Curley and his wife, where we see that it is inevitable that Lennie gets into trouble on the ranch. Curley is introduced on page twenty six, when he comes into the bunkhouse. At once George perceives trouble, and after Curley has left he tells Lennie: “…he’s gonna take a sock at you the first chance he gets” (page thirty), and he repeats his worry about Lennie getting into trouble on the ranch when he says “Look Lennie, if you get in any kind of trouble, you remember what I told you to do?” page (thirty one). His premonition of trouble is a sign that there might be trouble, and this can be seen again when Curley’s wife is introduced on page thirty two “A girl was standing there looking in.”

George thinks that she is also trouble, and again, warns Lennie to stay away from her, and describes her in words that suggest that she is going to bring trouble in the future “I seen ’em poison before…rattrap” (pages thirty four/thirty five) And the words poison and rattrap are very strong similes, suggesting that it is inevitable that she will bring trouble and as trouble on ranches is something which we have learned to associate with Lennie “…and you ain’t gonna do no bad things like you done in Weed, neither…” (page eight), the inevitability of trouble in Lennie’s case is inevitable also. Another clear indication about the inevitability of the failure of the American Dream can be seen on page thirty four when Lennie makes his view about the ranch clear “I don’t like this place George. This ain’t no good place.” If even the slow minded Lennie can foretell trouble on the ranch, then it is inevitable that there will be trouble, and therefore that the American Dream will not be realized.

John Steinbeck wrote Of Mice and Men in an era where there was no hope, no identity, and no possibility of ever achieving the American dream. The conclusions drawn from the introductions of the novel were written to encourage the American people that they could gain positive attitudes through being good at a job like Slim, who is confident about himself, or like Lennie and George, who are not “mean” because of companionship. Perhaps the reason that these ideas were in the introductions was to signify that the end of the Depression and a better life could be foreseen even at its beginning.

The conclusions in John Steinbeck's "Of Mice and Men". (2016, Jul 05). Retrieved from https://studymoose.com/the-conclusions-in-john-steinbecks-of-mice-and-men-essay 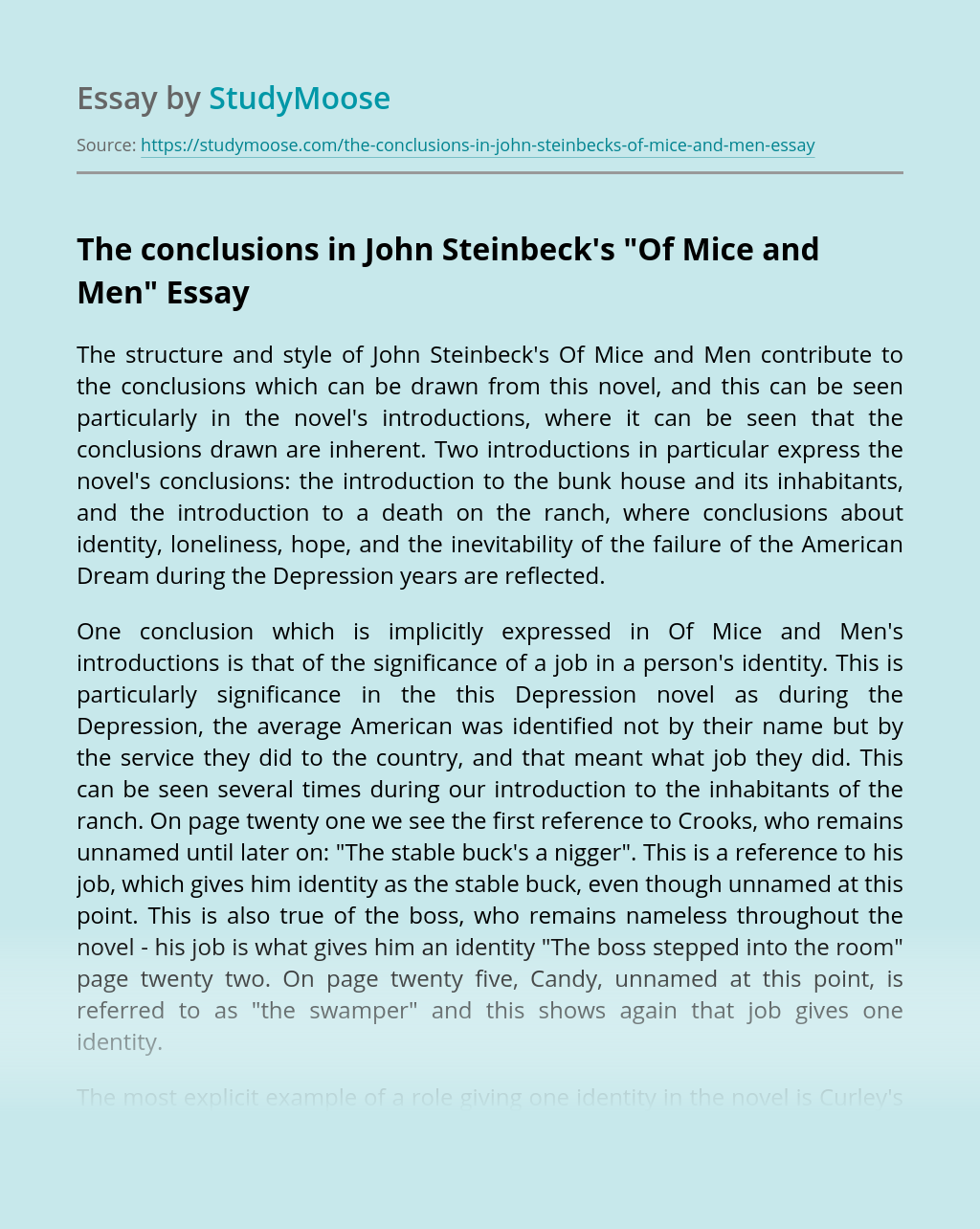