The classic 1937 novel Of Mice and Men by John Steinbeck is about two migrant workers who journey across Southern California to find new jobs to make money. However, the setting takes place during the Great Depression and things start to take a turn for the men which make the story amazing. Over many years, Of Mice and Men has been unfortunately banned many times. This novel has been worshipped for the realism it provides and listed as one the top banned book in American history.

Don't use plagiarized sources. Get your custom essay on
“ John Steinbeck’s classic novel Of Mice and Men ”
Get custom paper
NEW! smart matching with writer

Why a book this good be banned? It was banned for its use of racial slurs, inappropriate language, vulgarity, and profanity. Keep in mind, John Steinbeck is a Nobel Prize winner for literature in 1962. There are distinctive viewpoints on why Of Mice of Men by John Steinbeck should not be a banned book.

First things first, Of Mice and Men imparts the world with beautiful life lessons like sticking to and following your dreams while never giving up those dreams.

This is one of three main reasons why banning this amazing novel was such an unsuitable and poor decision made as the story paints a clear and understanding picture of factual history throughout the times of the Great Depression. John Steinbeck once spoke about the type of people who use profanity on a daily basis from a letter he wrote and delivered to his grandmother in 1937 saying, “adornment and ornament is never vulgar and to write it so”.

John Steinbeck wrote Of Mice and Men because of the intense way it’s what used to describe the fear of the Great Depression era.

To add to this even more, two life lessons found within the text is that whenever we search for approval we find disappointment. The example scene begins with, “Feel right around there and see how soft it is.” Lennie’s big fingers fell to stroking her hair. “Don’t you mess it up,” she said. Lennie’s fingers closed on her hair and hung on. He shook her; and her body flopped like a fish. And then she was still, for Lennie had broken her neck (Narrator, pg. 99-100). The last lesson is that people who are mentally ill or weak are repeatedly pitied of the strong-minded. Used to play jokes on im cause he was too dumb to take care of imself (George, pg. 44).

Secondly, Of Mice and Men should not be banned because it provides a clear insight on the different types of literary techniques. John Steinbeck uses descriptive language to show how the characters Lennie and George are portrayed by their actions. At this situation, Lennie is described as being very clever and intelligent. The author uses imagery to show how the animals in the novel are depicted by their physical appearance. He writes that they are all white, with brown eyes and big ears. This portrays that the animals are not only beautiful creatures, but have a sense of humor since they look somewhat funny. This makes the reader feel like they are part of something bigger than just themselves reading another story. It also gives the reader a sense of what kind of a character Lennie is during all of it. Steinbeck uses words like soft, hard-edged, and sharp to describe the different characters throughout. Steinbeck is also an amazing author for the amount of similes to make the reader think about what George and Lennie are thinking.

In the beginning of the book, there is an excessive amount of writing techniques like alliteration, repetition, and anaphora. “A few miles south of Soledad, the Salinas River drops in close to the hillside bank and runs deep and green. The water is warm too, for it has slipped twinkling over the yellow sands in the sunlight before reaching the narrow pool. On one side of the river the golden foothill slopes curve up to the strong and rocky Gabilan mountains, but on the valley side the water is lined white trees-willows fresh and green with every spring, carrying in their lower leave junctures the debris of the winter’s flooding; and sycamores with mottled, white, recumbent limbs and branches that arch over the pool. On the sandy bank under the trees the leaves lie deep and so crisp that a lizard makes a great skittering if he runs among them” (Narrator, pg. 1).

Last but not least, Of Mice and Men offers a realistic and historical depiction of what life was like on a ranch during the 1930 Great Depression. People who lived in California at the time had to really work hard and make a money, but everyone was held accountable for their actions no matter what challenges they faced. Truly a hard time to live through. The historical events of ranchers in California, after World War I, economic and environmental forces brought numerous poor and transient environmental specialists from the Great Plains states, for example, Oklahoma, Texas, and Kansas, to California. Following World War I, a subsidence prompted to drop of market prices of homestead crops, which implied that ranchers were compelled to create more products so as to acquire a similar measure of money.

To fulfill this need for expanded efficiency, numerous ranchers purchased more land and put resources into costly agrarian hardware, which drove them into an obligation. The stock market crash of 1929 just exacerbated the whole situation. Banks were compelled to abandon home loans and gather obligations. Unfit to pay their loan bosses, numerous ranchers lost their property and were compelled to discover other work. In any case, doing as such demonstrated exceptionally troublesome, since the country’s unemployment rate had soared, topping at almost twenty-five percent in 1933.

A good example of the living conditions George and Lennie had to adapt is explained on page nineteen. “The bunk house was a long, rectangular building. Inside, the walls were whitewashed and the floor unpainted. In three walls there were small, square windows, and in the fourth, a solid door with a wooden latch. Against the walls were eight bunks, five of them made up with blankets and the other three showing their burlap ticking. Over each bunk there was nailed an apple box with the opening forward so that it made two shelves for the personal belongings of the occupant of the bunk” (Narrator, pg. 19).

Concerning people who think the book should stay prohibited, there is one reason that for the duration of our lives has dependably been an issue and that is Discrimination. Of Mice and Men has numerous models containing this. Discrimination isn’t simply founded on skin color, yet in addition on age and sexual orientation. The first is the point at which the character, Crooks, is segregated as a result of his skin color. “They play cards in there, but I can’t play because I’m black. They say I stink.” (pg. 34) This statement shows how the young men on the ranch won’t enable Crooks to play cards since he’s dark. A man separated by his age is Candy; he has a rancid, old, feeble pooch. The young men at the homestead don’t care for the canine any longer since it’s pointless.

“Why’n’t you get Candy to shoot his old dog” (pg. 17). This makes Candy figure what will occur in the event that he winds up futile, will they shoot him? It makes one marvel, who cares if he’s old and pointless he’s a person and nobody has the privilege to murder another regardless of how old they are. They generally believe he’s unfit to do things since he’s old, despite the fact that he can do it “I lost my hand right here on this ranch. That’s why they give me a job swampin” (pg. 29). All through the book Candy minds his own business, far from others, since he’s rejected by them. Many individuals all through the novel get injured physically and rationally.

In conclusion, Of Mice and Men is an absolute, must read for anyone who has the slightest interested in literature and American history. This novel is very important because it teaches us about what it is to be human and how we overcome our problems. It also shows how to give kindness and love for those who are in desperate need of it even if that person is your best friend. The distinctive viewpoints on why Of Mice of Men by John Steinbeck should not be a banned book are; the realistic and historical depictions of life on a ranch during the Great Depression, the study of many types of literary techniques, and the life lessons shown throughout this amazing novel. John Steinbeck did a great job writing this book and is considered one of the greatest authors of all time. 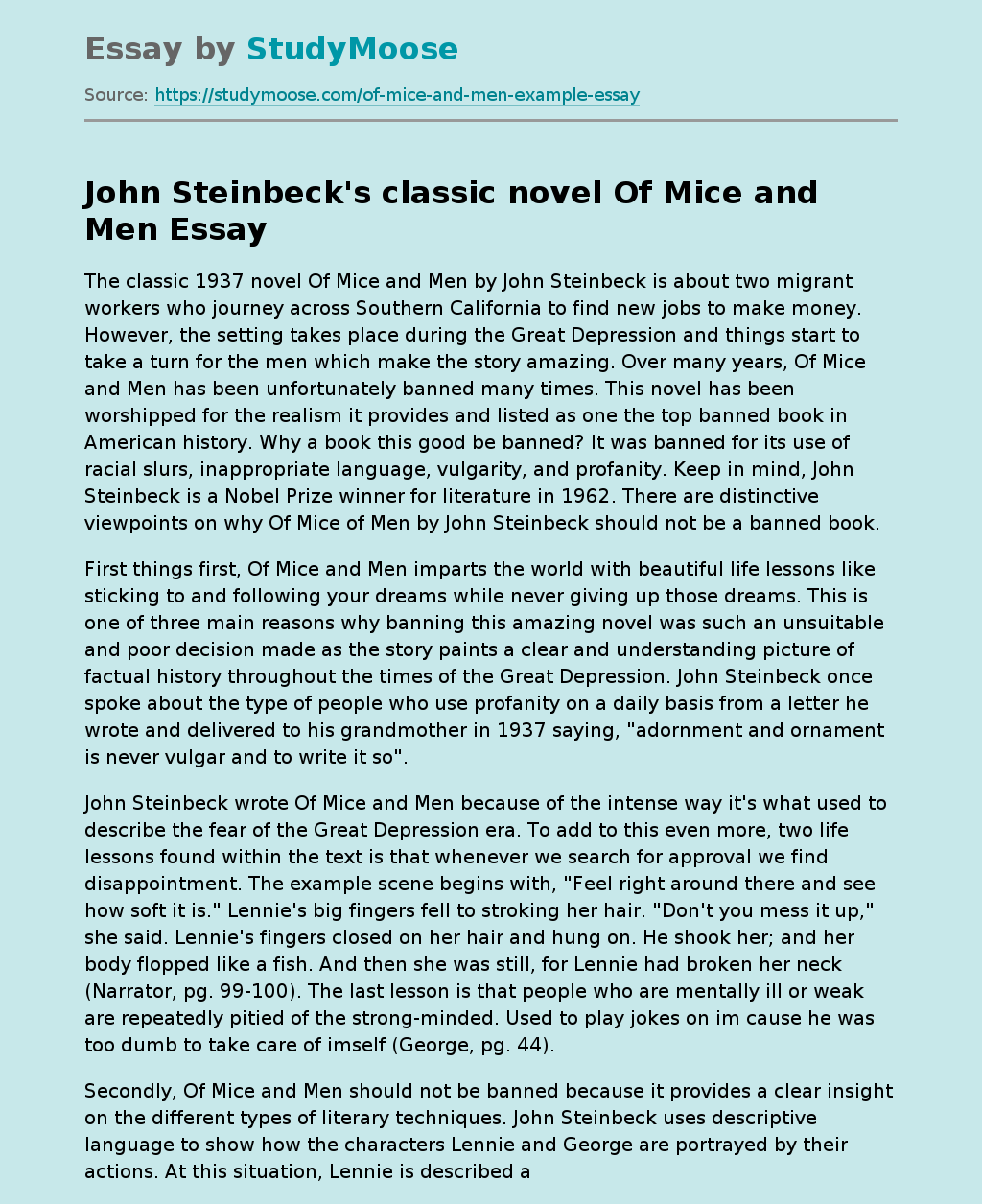