Characters in John Steinbeck's Of Mice and Men

How does Steinbeck present Lennie and George in the 1st chapter? Lennie and George’s father and son like relationship is clearly one of love, although from the beginning we sense George’s frustration due to Lennie’s constant childish behaviour. George is very protective over Lennie, “Lennie for God’s sake don’t drink so much!” because he has been told to look after him by his “Aunt Clara”. George does like having Lennie around as he says, “No you stay with me”.

Don't use plagiarized sources. Get your custom essay on
“ Characters in John Steinbeck’s Of Mice and Men ”
Get custom paper
NEW! smart matching with writer

As Lennie and George are itinerant workers, it can be a very lonely life so the fact that they have each other means that they are very lucky. However this constant responsibility can obviously present problems, George says “When I think of the swell time I could’ve had without you”, having Lennie around has stopped him from doing lots of things other men of his age would’ve done. George is quite clearly the leading role in their relationship.

As we know, Lennie is mentally not all there as he uses simple and un-educated language, such as ‘Look, George. Look what I done.” Due to Lennie being childish and not very intelligent it means that he has to rely on George an awful lot.

An example suggesting that Lennie is reliant on George is that “They had walked in single file down the path”. This suggests that George is in control and acts as a parent like figure, it also showing George’s intelligence and maturity.

This responsibility that George has to look after Lennie means that he is very protective, he says “Don’t drink so much”. This is an example of George being a paternal figure, this is an imperative and he says it sharply implying that he is worried about George. George has to repeatedly remind Lennie if he wants him to do or not do something. In the 1st chapter it is suggested by Steinbeck that Lennie has animal qualities to match his childish behaviour. His big stature makes up for his childish behaviour as George can get Lennie to do tasks that he wouldn’t otherwise be able to do, as he is small. He tells Lennie, “Flood water wood. Now you go get it”. In the book it says that he was “snorting like a horse” and “dragging” his feet. I think that Steinbeck’s reason for doing this is to show that Lennie is to be looked after and can be irrational, just as an animal is, and he needs to be given direction “like a horse”.

He seeks praise just as a dog would to its owner, Lennie says “Look George Look”, this implies that Lennie aspires to be like George and is constantly in awe of George. We are also told that with his strength he can accidently use his strength to be dangerous, an example of animal imagery used to describe Lennie as dangerous is that he uses his “paw”. This is an example of foreboding because, just as in Weed, he may do something that may get them into trouble. We are told early on that George and Lennie are both have the same aspiration, and that is to have a ‘little house’ and ‘some rabbits’. Although they want it for different purposes this is something they aspire to do, and they want to do it together. Lennie’s is to have rabbits due to his obsession with petting animals, mice on the particular occasion in the woods, “it’s on’y a mouse George”. George’s aspiration is more to do with the fact that they will no longer need to worry about getting a job, which is certainly difficult with Lennie.

They want to “live off the fat of the land”, suggesting that they don’t want to work for anyone and be continuingly undermined by bosses and having to live in such awful conditions. They don’t want to be one of the stereotypes as they say “us guys are the loneliest guys in the world”. To conclude, I think that Steinbeck presents Lennie and George with a strong relationship. George being a father like figure to Lennie. They both need each other, otherwise they would be lonely just like other itinerant workers at this time. Lennie really does look up to George and there has been a strong sense of foreboding through the actions from the past that we find out about. As the book progresses I can expect the reader to understand more fully that the relationship that these two men have.

Characters in John Steinbeck's Of Mice and Men. (2016, May 31). Retrieved from https://studymoose.com/characters-in-john-steinbecks-of-mice-and-men-essay 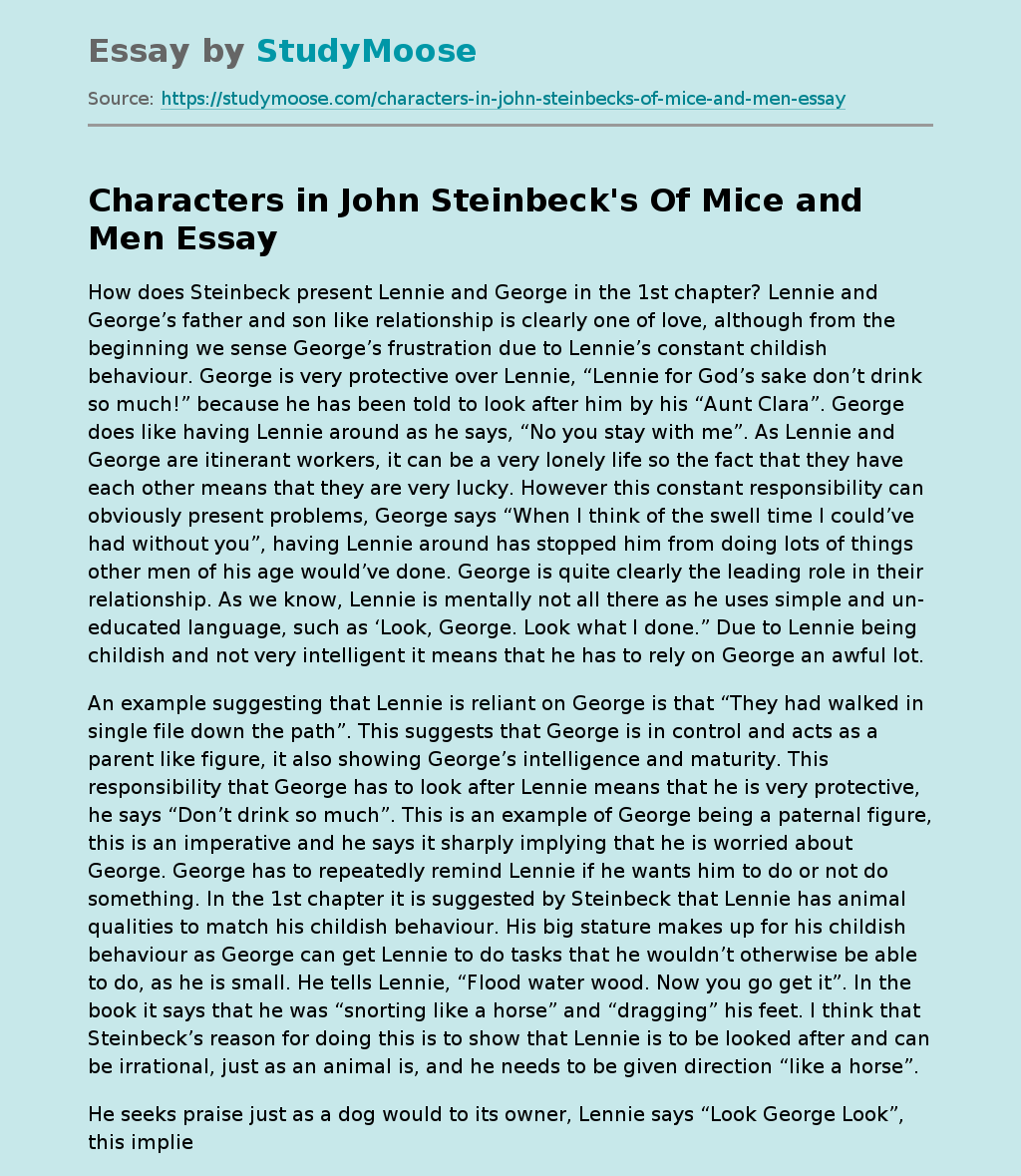