Moral Issues, Loneliness and Friendship in Of Mice and Men

In the novel Of Mice and Men by John Steinbeck friendship is portrayed by two different main characters. George is intelligent and a very hardworking man. Lennie is a very hardworking man, but unlike George, he’s always causing trouble. However, the bond that they have leads them to have a very strong friendship. Their relationship shows how they benefit from their companionship.

At the beginning of the story, George and Lennie are at the pond and Lennie starts to drink the water aggressively.

Don't use plagiarized sources. Get your custom essay on
“ Moral Issues, Loneliness and Friendship in Of Mice and Men ”
Get custom paper
NEW! smart matching with writer

“Lennie!” he said sharply. “Lennie, for God’ sake don’t drink so much.” Lennie continued to snort into the pool. The small man leaned over and shook him by the shoulder. “Lennie. You gonna be sick like you was last night” (Steinbeck 3). This portrays friendship because George is concerned about Lennie’s health. George being there with Lennie affects him because if he wasn’t no one would be there to look out for him.

When George tells Lennie about a story about how guys like them that work on the ranch are lonely he interrupts him and says, “Lennie broke in.

But not us! An’ why? Because… because I got you to look after me, and you got me to look after you, and that’s why.” He laughed delightedly. “Go on now, George!” (Steinbeck 14). This shows friendship because Lennie is stating that they’re not lonely and that they have each other. This affects different characters because none of them on the ranch have a friendship like George and Lennie do.

They’re all lonely and they don’t really bond with each other.

George leaves Lennie to go out with the other ranch workers. Later on, Lennie ends up sitting and talking to Crook. Crook gets an idea and says, “S’pose George don’t come back no more. S’pose he took a powder and just ain’t coming back no more. What’ll you do then?” (Steinbeck 71). This causes Lennie to tense up, “Suddenly Lennie’s eyes centered and grew quiet, and mad. He walked dangerously toward Crooks. ‘Who hurt George?’ he demanded.” (Steinbeck 72). Lennie is showing how he cares for George by asking Crook who hurt him. By what Crook said impacts, Lennie, because with the absence of George he would have no one to be with him.

Overall, George and Lennie have a very special friendship on the ranch. They’re always caring for each other. Although, it seems as if George plays more of a parent role for Lennie, their relationship shows how they help each other in the harder times in life.

Moral Issues, Loneliness and Friendship in Of Mice and Men. (2020, Sep 10). Retrieved from http://studymoose.com/moral-issues-loneliness-and-friendship-in-of-mice-and-men-essay 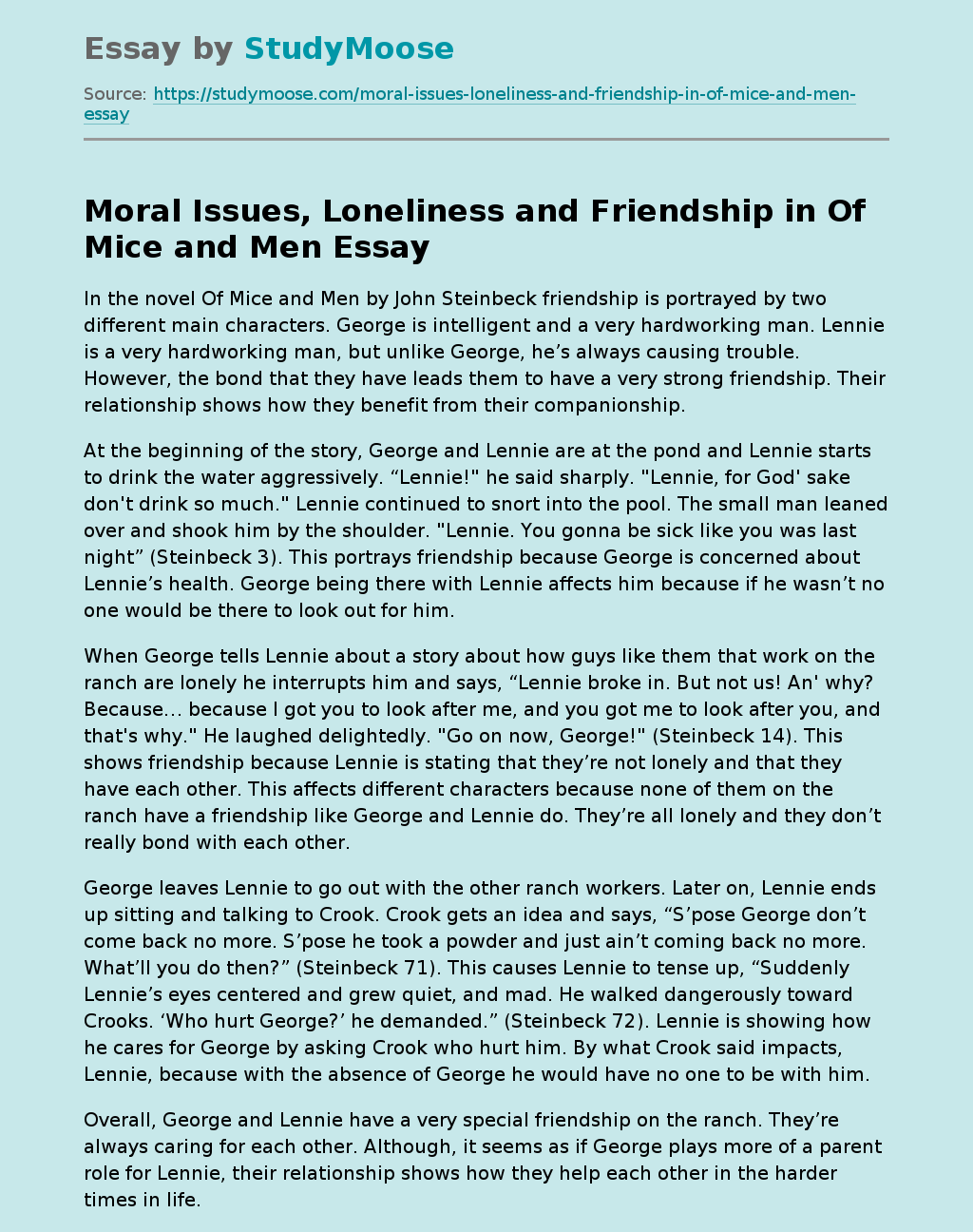