The novel "Of Mice and Men" By John Steinbeck

To explain how the novel “Of Mice and Men” By John Steinbeck deals with the themes of loneliness and dreams.

In your answer you should refer closely to this text and to such techniques as character, setting, dialogue or any other appropriate technique.

“Of Mice and Men”

The novella “Of Mice and Men” by John Steinbeck is a tragic story about two friends who have a dream. It deals with themes such as loneliness. This book is set in California at the time of the great depression.

Don't use plagiarized sources. Get your custom essay on
“ The novel “Of Mice and Men” By John Steinbeck ”
Get custom paper
NEW! smart matching with writer

There are many themes conveyed throughout this novella, one being loneliness. A technique used is setting. Most of the book is set on a ranch in a quiet area with the nearest town, Soledad meaning loneliness in Spanish.

One of the techniques used to convey loneliness is character. John Steinbeck also uses character to follow through the theme of loneliness. One character who is lonely is Curley’s wife. She admits this to Lennie “I get awful lonely”.

It is proberly because she is the only female on the ranch and has no one else to talk to except her husband who leaves her alone on Saturday nights to go to the brothel.

She knows that she could have been in the movies, which makes her even lonelier. Another lonely character is Crooks. He is segregated from the others because he is black. He also doesn’t work near the others or stay in the bunkhouse. He tells Lennie about his need for company “a guy gets too lonely an’ he gets sick”.

He explains that he reads books, even though he hates them “books ain’t no good”. I think he uses reading books as a way of trying to combat his loneliness.

Candy is also a lonely because he has no family and his dog, his only friend, was shot. Like Crooks, Candy also works alone as a swamper/cleaner. He doesn’t feel part of the group because he does not work in the fields with the others. He is treated like an outcast because he is old and cannot go on brothel visits. Curley’s wife refers to this “they left all the weak ones here” when the others go to the brothel. When he hears about George and Lennie’s dream he offers to join in because he wants somewhere to belong, as it is a basic human instinct to feel wanted.

Another main theme is friendship. This is mainly conveyed through the characters George and Lennie .it is usual for people with their lifestyles to have good friendships as they state many times “Guys like us, that work on ranches, are the loneliest guys in the world. But we ain’t like that because I got you to look after me and you got me to look after you.” We know this is unusual because Slim says “Funny how you and him string along together”. The boss is also suspicious that George may be exploiting Lennie “I never seen one guy take so much trouble for another guy”. I think that from George and Lennie’s friendship, Lennie gains someone to look after him and George (even though he always complains about Lennie) seems to get a purpose in his life. They have each other to talk to so they can never get lonely.

Several characters in the novel have dreams. This is another main theme in the book. George and Lennie’s dream is to own a little farm with animals and “live off the fatta the lan’ “. Lennie especially wants to keep rabbits and throughout George keeps promising that Lennie will get to own rabbits someday. This dream keeps Lennie working hard and behaving, I think without it he would have nothing to live for. Candy’s dream is just to belong somewhere. This explains why he offers his savings to join George and Lennie with their dream ” ‘S’pose I went in with you guys. Tha’s three hundred an’ fifty bucks I’d put in”. George and Lennie accept Candy’s offer because it brings them all much closer to making their dreams become reality.

Curley’s wife has a dream of what could have happened “coulda made somethin’ of myself”. She was told she could be a movie star but her dream was ruined by marrying. I think she hopes that her dream is still possible and it keeps her motivated. Crook’s dream is more of a longing for his childhood again. He liked things when he was a boy because everyone was equal. He fitted in because he lived with his family and got to play with white children. He tells Lennie about this “I was born right here in California. My old man had a chicken ranch”. He considers joining George, Lennie and Candy. It looks as if has realised his dream but they are not interested. Both Crooks and Curley’s wife mention that every man has a similar dream “that same damn thing in their heads”. I think all these men need a dream to keep them going, to give meaning to their dull lifes.

Disillusionment is also a main theme conveyed throughout the novel. George and Lennie’s dream is eventually shattered when Lennie kills Curley’s wife. This also affects Candy. Candy asks George “Then – it’s all off?”

His dream is destroyed through no fault of his own. He vents his anger on the dead Curleys wife as he realises that his dream will never come true “You God damn tramp, You done it, di’n’t you?” Curley’s wife’s dream is ruined because she dies. Her dream seemed unrealistic but now it can never happen. Some of the characters recognise that these kinds of dreams are unrealistic such as Crooks while most don’t realise this until their dream is shattered like Candy. Crooks mentions that everyone has this dream and that they never attain it “I seen it happen too many times”. John Steinbeck presents dreams to be unrealistic.

To conclude I think that in this novel Steinbeck successfully manages to convey the main themes, loneliness and dreams. He deals with these using characters and their life stories. I also think John Steinbeck puts across a message of dreams being unrealistic.

The novel "Of Mice and Men" By John Steinbeck. (2017, Oct 26). Retrieved from https://studymoose.com/the-novel-of-mice-and-men-by-john-steinbeck-2-essay 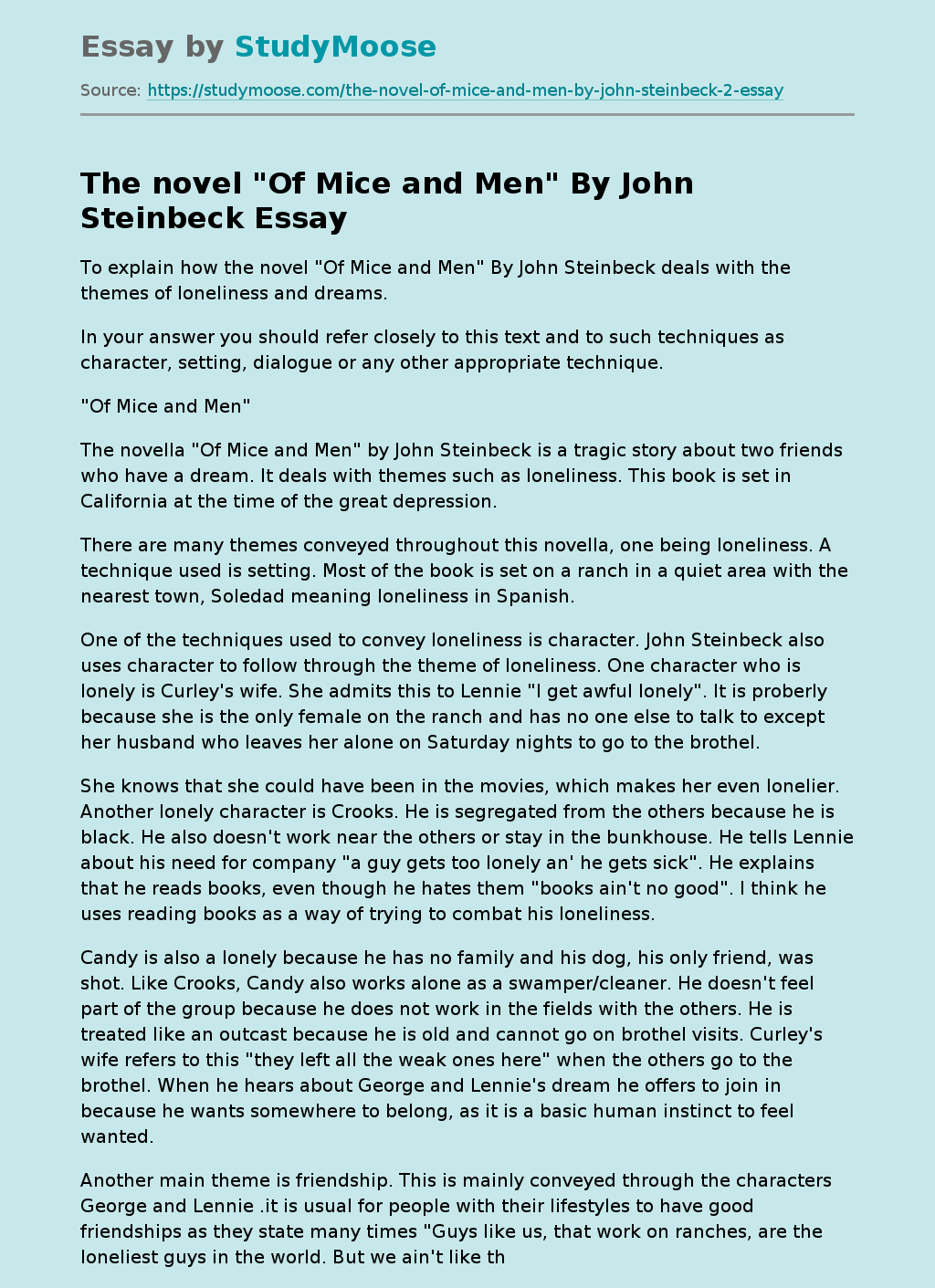